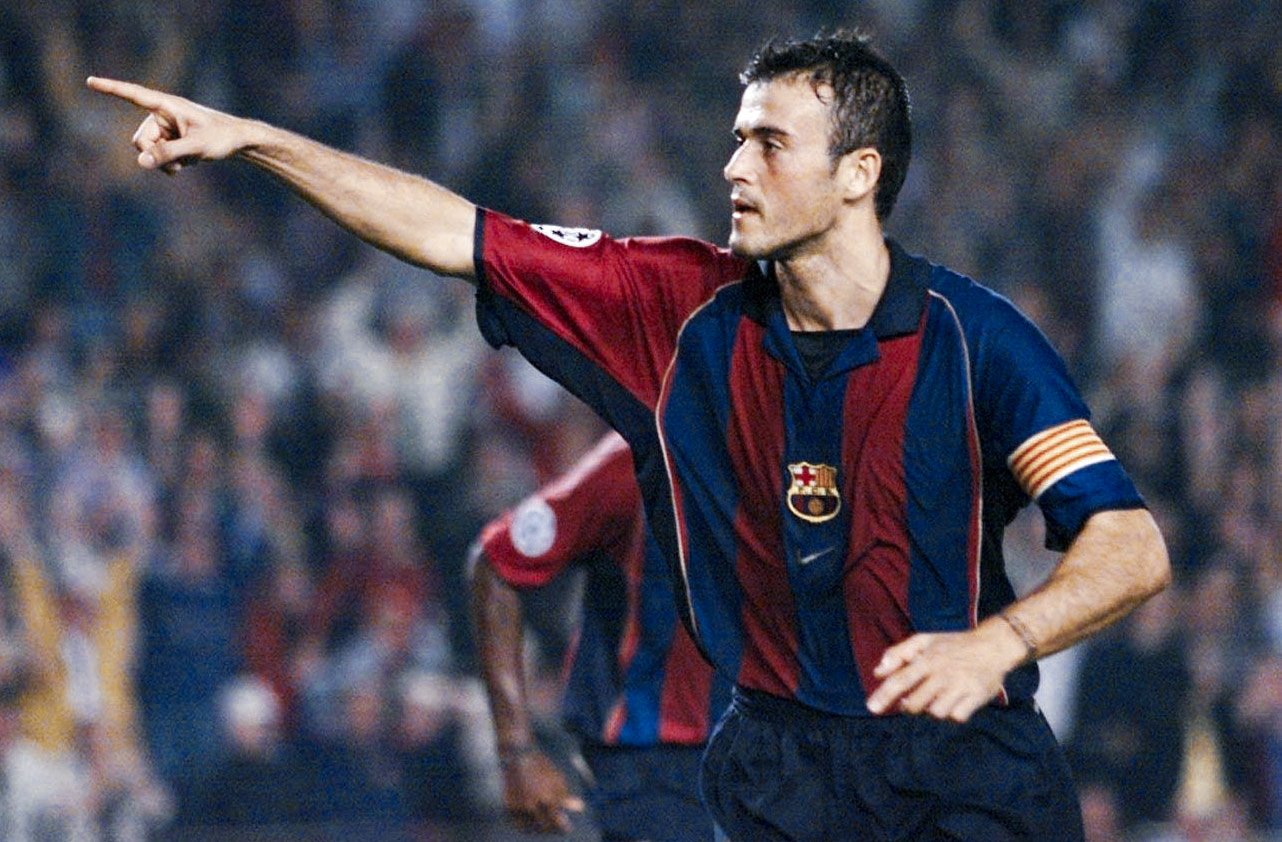 In 1902, Alfonso Albéniz made the switch from Barcelona to Real Madrid. He was the first player to make the move between these two bitter rivals and is part of an exclusive club that has played for both teams. In total, 33 players have played for both sides, with some having great careers at each club while others had limited success.

There have been some recognisable names on this list such as Ronaldo Nazário, Luis Figo, Michael Laudrup, Samuel Eto’o, Julen Lopetegui, Josep Samitier and, of course, Luis Enrique.

Luis Figo’s transfer was arguably the most notorious as he left Barcelona for a move to the capital. On his return to the Camp Nou, Figo was viewed as a traitor. As the Portuguese star went over to take a corner kick, he was showered with projectiles from an enraged home support. Famously, one of these projectiles was a pig’s head, as Culés wanted to show their disgust at the move to their fiercest rivals.

Others such as Samuel Eto’o, have come back to haunt their previous club. The striker joined Los Blancos at just 16 years old, but was unable to break into the first team and was sold. Four years later he signed with the Catalans and would establish himself as a club legend, scoring many goals.

On the other hand, the Blaugrana let Ronald Nazário leave after just one season because of a contract dispute. El Fenomino would eventually sign for Real Madrid and become one of the greatest players ever to play the game.

From Madrid to Catalonia

Luis Enrique is one of these few players to play for both Barcelona and Real Madrid. He is part of an even more exclusive club that has played for both teams and been successful at both. Lucho initially played for Los Blancos for five seasons between 1991 and 1996.

Enrique enjoyed a rather successful, yet a lot lesser-known spell with Real Madrid. (Photo by Mike Hewitt/Allsport)

During this time, the Spaniard would make over 200 appearances for the club from the capital. He predominantly played as a right midfielder or right-winger but was also used centrally as an attacking midfielder.

Madrid were delighted with his performances and offered him a new contract to keep him at the club. However, Enrique refused to sign, stating that he felt underappreciated by the hierarchy and the fans. This meant after his initial five-year contract expired, the talented forward became a free agent. The expression ‘one man’s loss is another man’s gain’ fits perfectly with this scenario as Barcelona snatched him up for free.

The move was met with some displeasure from the Blaugrana supporters. Of course, a player arriving from the club’s biggest rivals is never going to be welcomed with open arms by everyone. However, Luis Enrique knew this, and was determined to earn the affection of the Camp Nou faithful.

Donning the Garnet and Blue

When Luis Enrique signed for Barcelona in the summer of 1996, club legend Johan Cruyff had just left as the manager after eight years. The team had finished 3rd in the league and were going through somewhat of a transitioning phase. There were several new signings and departures during the transfer window when Enrique joined, including the arrivals of Ronaldo Nazário and manager Bobby Robson.

Overall, his first season was a success with Barça, winning the Copa Del Rey and UEFA Cup Winners’ Cup. The club finished second in the league with 90 points, two behind Real Madrid. Lucho was a regular in the line-up and had the most prolific season of his career, so far. He scored 17 times in La Liga, more goals than he managed in his five seasons in Madrid.

Luis Enrique celebrated each goal with passion and would go on to become an instant hit with the Camp Nou faithful. (Photo by Tim De Waele/Getty Images)

Over the next two campaigns, the Spaniard really started to shine for Barça, and his importance in the team continued to grow. He was becoming a real star in the squad, and his attitude for football was second to none. The following seasons, Lucho helped lead the team to two consecutive league titles and was one of the club’s stand-out performers.

He was a technically gifted player that had great control of the ball that allowed him to dribble past his opponents with ease. Also known for having a keen eye for goal, he was a straightforward player, who wore the crest on his sleeve. His selfless work for the team quickly made him a fan favourite.

Enrique’s ability and understanding of football was shown by how versatile he was. During his spell in Barcelona, the ‘forward’ played in every position except for left-back and goalkeeper. He played everywhere in the attack including on both flanks, attacking midfield and as a centre forward. Lucho was also deployed as a central midfielder, defensive midfielder, right-back on several occasions and when the push came to shove, even as a centre-back.

This sacrifice, along with his strong personality, would eventually earn him the captain’s armband in 2001 after Pep Guardiola departed the club. This proved to be an ingenious decision as Barça’s number 21 was a natural leader, leading by example. Luis Enrique was always mentally strong and had a desire to win and lift his team, making him an ideal captain.

Luis Enrique wore the armband with pride and did the role of a captain justice. (Photo by Martin Rose/Bongarts/Getty Images)

He retained the captaincy until he retired at the age of 34 due to injuries. Enrique had options to extend his playing career with Barça offering him a new contract. Sporting Gijón also looked for his services once again as they were his first professional club. Sadly, the Spaniard felt he could not reach the required fitness or level anymore to continue playing football for either side.

Lucho had a great career at Barcelona, where he was always destined to play, despite playing for Real Madrid for five seasons. The Spaniard was technically brilliant with the ball at his feet and was confident in his abilities. He was a true leader and a role model with his dedication and hard work for the team.

Enrique loved cutting in from the wide areas and driving at defenders. His intelligence as a player allowed him to work effectively in the centre of the pitch too. He linked the play well, and this allowed others in the team to thrive. Enrique was always aware of the space around him and knew when to attack it.

Luis Enrique was a competitive player that always wanted to win, and justified the duties as captain with each performance. This competitive nature was coupled with a usually calm temperament. The Catalan forward always produced when his team needed him and Lucho would score some important goals during his spell at the Camp Nou.

“Being a player for a big team like Barça, you have to be very strong.”

One of his best moments for Barcelona came against his former employers, Real Madrid. Enrique intercepted a pass from the Madrid defence, burst past two opponents and smashed the ball into the goal from 25 yards. What makes it even better for Culés is how emphatically he celebrated his goal. There was no love lost between the forward and he previous team, Enrique could not care less about the whites of the capital.

Luis Enrique had left the life of the capital behind and proved it in every Clasico. (Photo by Clive Brunskill/Getty Images)

The Spaniard would make a habit of scoring against Los Blancos during his time in Catalonia, especially headers. Each goal he scored against Madrid, he celebrated as if he had never played for them. The passion he showed for Barcelona was admirable. In truth, Lucho was destined to play for Barça as his style and ability made him a perfect match. This was also reflected each time he set foot on the pitch.

This passion for Barcelona was famously shown in a game against Real Madrid again. As Carles Puyol tackled Zinedine Zidane, he caught an elbow to the face from the Frenchman. Enrique, the captain at the time, was the first player to confront Zidane. Both players were clearly enraged as they squared up. The Madrid midfielder pushed Lucho in the face while Barça’s captain fired strong words back in his direction.

In 2014, Luis Enrique returned to manage Barcelona’s first team after working with Barça B, Celta Vigo and Roma. Every Culé will remember his time as manager fondly. His 2015 campaign is one of the best seasons in the history of the club.

Luis Enrique managed to etch a name for himself as an incredible manager of Barcelona after achieving tremendous success as captain and player. (Photo by Matthias Hangst/Getty Images)

Not only did the team win their second elusive treble, but they also played some stunning football, shaking some of the best teams across the continent. Most notably the Lionel Messi, Luis Suárez and Neymar trident took the footballing world by storm, ending their stories as arguably the greatest trio to grace the world of sport.

However, it was Enrique who masterminded this team and made it his own. He commanded the respect of football’s biggest stars and got the best out of them. It proves what a strong character Lucho was, mirroring his time as the bearer of the armband.

Enrique’s greatest attribute has always been the strength of his character. Throughout his time as a player, manager and in his personal life, Enrique has faced many challenges. The former Barça captain has always overcome these challenges and proven he is a leader.

Luis Enrique left behind a star-studded legacy as a player, captain, and coach. (Photo by Shaun Botterill/Getty Images)

“Coaching Barça involved dedicating all your energy to the team, to the club, and the players. And when you see the end is coming, you have to take it in, accept it, and communicate it. There’s nothing else you can do.”

From joining Barcelona as a free agent, after five seasons at Real Madrid, the forward became a Barcelona legend the hard way. Luis Enrique and his rise to becoming club captain showcases his immense personality and talent. Enrique has always been respected by teammates, players, managers and fans for his attitude on and off the field.