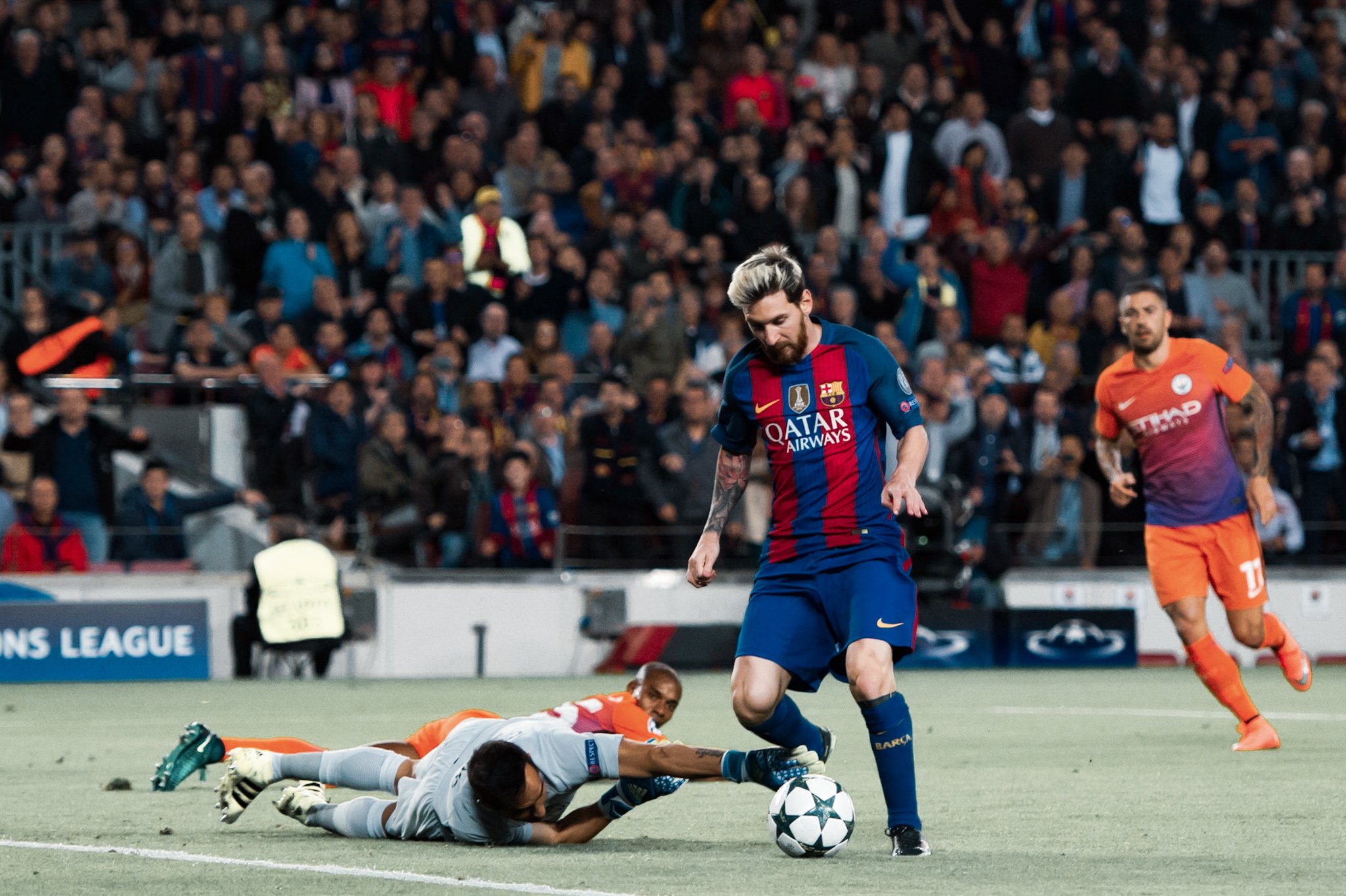 Many of football’s most skilled dribblers have showcased their talent for Barcelona. By going beyond basic statistics, we can identify who these players have been in the past few seasons.

One of the most important football skills is retaining possession of the ball. Whether a side actually plays a possession-based style or not, having players who can avoid turning the ball over before looking to shoot or pass is crucial.

So, does this mean players who commit the most turnovers are the worst dribblers? Well, using data from Football Reference, if we define turnovers as miscontrols plus dispossessions, here are some of the “worst” dribblers in the big five leagues in the last three completed seasons:

There are over 4,000 player seasons included here, so all those names are in the bottom 1%. Elsewhere in the bottom 100 are names like Kai Havertz, Richarlison, Mohamed Salah, Anthony Martial, Josip Iličić, Ante Rebić, Allan Saint-Maximin, Ángel Correa – plenty of great to world-class players.

From a Barcelona perspective, the two players who averaged the most turnovers per 90 minutes in 2019/20 La Liga were Ansu Fati and Lionel Messi.

So, what are the clear issues here?

• Bias against advanced players. The higher up the pitch you get, the more eager the opposition is to win the ball, and the less space you have to work with.
• Bias against players who carry most of their team’s creative responsibilities. These players get a lot of their team’s advanced touches, have to try and create something with those touches, and they can be keyed in on by a defence who recognizes their importance.

How do we combat this? Those players mentioned are far from poor with the ball, so how do we go beyond the fact that they seem to be doing bad things with it very often?

In short, it takes into account where on the pitch a player gets on the ball, how risky they are with it, and how often they are under pressure from the opposition.

The model looks promising and has sound predictive power. Time to get into what it can tell us.

By comparing that expected turnovers number to the number of actual turnovers committed, we can locate some of the most skilled players on the ball who retain possession more than they would be predicted to. On that basis, here are some of the top overperformers in the data:

Right off the bat, that displays a lot of progress. While someone like Lionel Messi in the 2019/20 season can average the second-most turnovers on his team, adding this context shows the elite skill on the ball he truly possesses.

In addition to Messi, the top ten features some of the most dynamic players the game has to offer. The rest of the top 50 is then filled with names like David Silva, Serge Gnabry, Raheem Sterling, Cristiano Ronaldo (2017/18), Ousmane Dembélé, Kingsley Coman, Luis Suárez, Neymar, Ángel Di María, Riyad Mahrez, Karim Benzema, Jadon Sancho, and more.

On the flip side, here are the bottom ten individual seasons:

Now, while the added context of this expected turnover over/underperformance is clearly valuable, a player who performs poorly here can still not be declared outright bad.

Near the bottom are talented players like Duván Zapata, Yussuf Poulsen, and Sébastien Haller (at Eintracht Frankfurt), none of whom excel in terms of agility and dribbling.

Furthermore, the poor performers still include players who possess good to excellent technique, but who maybe overdo it at times and need some refining when it comes to their decision making. This includes Christian Pulisic at Borussia Dortmund, Jonathan Bamba’s last season at Saint-Étienne, Nicolas Pépé’s first season at Lille, 17-year-old Mickaël Cuisance in 2017/18, and Adnan Januzaj.

So, like any metric, this is not an all-encompassing measurement of a player’s overall ability. Rather, it is an examination of how skilled they in a specific area: avoiding turnovers.

It can be used to identify some of football’s most dynamic players with the ball at their feet such as Jeremie Boga, Kylian Mbappé, and Bernardo Silva. Conversely, it helps identify those who struggle in this facet of the game, whether it be for their lack of dynamism or quality decision making.

Lionel Messi has already been showcased for his incredible performance in all three seasons, but now it is time to analyze the whole Barça squad. To start off, here is how the qualified squad members stacked up for the 2017/18 campaign:

The brilliant attacking duo of Messi and Luis Suárez led the way while legendary Andrés Iniesta, despite being in his final season at the club, was still showing off his superb technique and close control. New attackers Ousmane Dembélé and Philippe Coutinho performed well but needed a bit of time to adapt.

After having some time to settle in, both Dembélé and Coutinho saw significant improvements to this aspect of their performance. Also worth noting is the tally of Samuel Umtiti, which was brilliant for a centre back and reflected his superb play that season.

Unfortunately, some signs of the ageing squad also began to show. Messi’s tally, while still elite, was slightly lower than it was the previous season. Furthermore, the performance of Suárez, Busquets, and Piqué dropped significantly.

Some of these worrying signs continued in the 2019/20 campaign:

There was a further decline from Messi and Piqué, while Suárez and Busquets levelled off. Ivan Rakitić also joined the ageing drop off club. Perhaps the most startling decline, though, was that of Samuel Umtiti, who had gone from outperforming his expected turnovers by 0.25 in 2018/19 to underperforming by 0.67.

In the French World Cup winner’s case, it was not age that caused this, but injury. By all accounts, Umtiti, recently has not been anywhere near the world-class player he was in years prior, and this is a reflection of his struggles.

On a brighter note, based on this analysis, the biggest positive of last season was the emergence of an incredibly dynamic attacker for such a young age, Ansu Fati. The fact that he turned the ball over 1.49 fewer times per 90 than expected is a testament to his maturity beyond his years.

We combined the best dribblers Barcelona have boasted of in recent season to create the “Ultimate Barça Dribbling 11”. That is, an 11 made up of the best individual seasons of expected turnover performance in that position, in the last three campaigns, not inlcuding 2020/21.

The goalkeeper spot will be given to Marc-André ter Stegen as keepers were not included in the analysis. Nobody outside of him would have a large enough sample size anyways, and he is pretty great with the ball at his feet. Here is how the rest of the side shaped up with a limit of one inclusion per player:

A few of the selections may be a bit surprising at first. While his career at the Camp Nou did not go as planned, there was no denying Thomas Vermaelen’s quality on the ball. That 2017/18 campaign was his only one meeting the playing-time threshold, and even then he barely made it over 1,000 minutes.

Junior Firpo taking the left-back spot is another that may seem odd at a glance. But while Jordi Alba has clearly been the better full back overall, the former Betis man attempted and completed more than double the dribbles per 90 of Alba in 2019/20 and carried the ball forwards more frequently.

The last player here who presumably could cause a bit of a stir is the Brazilian in midfield – Paulinho. A fan of his style and signing or not, he boasts some impressive metrics from his lone season at the club. The former Tottenham man was very active in the attacking third and penalty area while performing quite a bit of carrying and dribbling, and he still kept his turnovers low.

Overall, that is largely the team you would want to field if you needed the whole side to be dynamic with the ball at their feet and beat defenders or weave through tight spaces. Of course, there is so much more to the game, which is why you still need your distributors (Busquets), runners (Alba), defensive and aerial presences (Piqué), and more. It is still an interesting concept to apply, though.

One metric at face value never tells the whole story, especially one as skewed as turnovers. By adjusting the data, working jointly with multiple metrics, and finding correlations, we can extract far more meaningful insights.

In addition to going beyond turnovers by themselves, this analysis does the same for base dribbling statistics. Look at Ansu Fati last season, for instance; he had a solid volume of successful dribbles, but his success rate was shallow.

While that poor efficiency seems to point to a player who is erratic on the ball in tight situations, Fati actually outperformed his expected turnovers by 1.49 per 90 minutes. It all comes down to context.

By adding context and looking at things from a new perspective, we can gain a far better understanding of evaluating a player’s performance and identifying the best of the best.