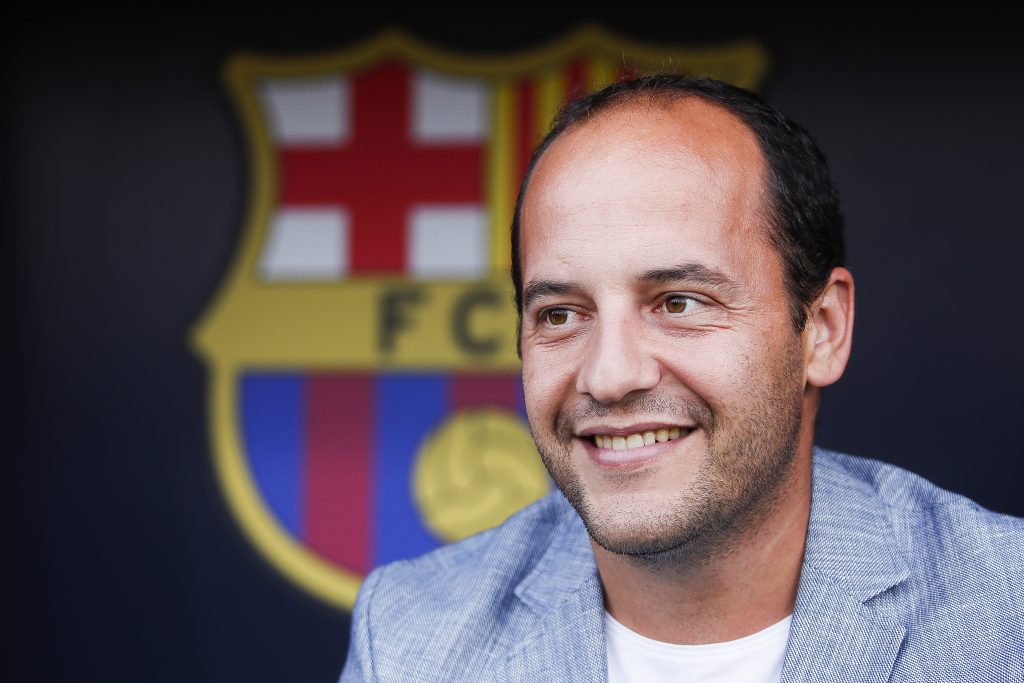 Reaching the Champions League final and winning the league, among other achievements, coach Lluís Cortés is taking Barça Femení to new heights.

FC Barcelona Femení has gone under a radical transformation within the past year and a half. Upon the sacking of Fran Sánchez in January 2019, the team grew from being an inconsistent side that was the second best in Spain, to European title contenders. This past month, it was made official that Barcelona would be given their first league title in half a decade, giving end to an unbeaten, completely dominant league campaign.

These newfound milestones and a return to dominance bear the name of one man: Barcelona manager Lluís Cortés. With just over a year and a half on the sidelines as head coach, Lluís Cortés has turned FC Barcelona Femení into a side that champions the long-held philosophy of the club he loves. At a rapid pace, playing to the purest positional play, the manager from Lleida emerges clearly with shades of glory.

After receiving a degree in physical education and sports sciences from the University of Lleida, Cortés began his managerial career with the UD Lleida women’s team. For years, he was an assistant to Natalia Arroyo and eventually became a full coach of the Catalan women’s national teams at the youth level ( U12, U16, and U18 ) and at the senior level. In 2017, he made a name for himself within the club when he found himself as an analyst and assistant for first team manager Fran Sánchez.

Manager Fran Sánchez was sacked in January 2019, before being replaced by assistant Lluís Cortés | Photo by David Ramos via Getty Images

The summer of 2017 was a major transitional period at the club. Fran Sánchez was appointed following the stepping down of Xavi Llorens after 11 years in charge and in the middle of a total squad overhaul. During his tenure, he won a Copa de la Reina title but found his side slipping in the league behind Atlético de Madrid. The doubts about Sánchez’s coaching abilities came to a boiling point in January of 2019, when Barcelona recorded their third draw of the season against Espanyol, putting them even further behind Atleti. Baffled by the irregularity and with the bitter taste of stumbling in the Catalan derby, the Barça leadership did not trust Fran Sánchez to give the command and announced Lluís Cortés as the successor not soon after.

In Cortés’s first season in charge, he guided the team to the Champions League final in Budapest. In the following campaign the team has won the league title, the Spanish Super Cup and the Copa Catalunya. “You have to try to be Barça – not only play well, but also win”, highlighted the Catalan coach on the day of his presentation. Cortés did not disappoint. Convinced and energetic, Lluís’s ideology managed to prevail to become a worldwide reference today.

Losing the Champions League final paved the path to success

Given the difficulty of the challenge by the middle of the season, Barça Femení showed flashes of light on the horizon. Despite not being able to win the league, which fell to the hands of Atlético de Madrid for the third consecutive time, the final of the UEFA Women’s Champions League was the turning point of Cortés’s appointment. The feat of becoming the first Spanish team to reach a final in the highest European competition was the beginning of a story with many pages yet to be written.

The loss at the hands of Olympique de Lyon by 4–1 in Budapest was painful, but the club took it seriously as something to learn from. The match against the French giants filled the team with the belief that they could build a machine designed to dominate. In addition to their dominance, the attractive football executed by Cortés’s side was a showcase for what Barcelona had to offer and entertained fans around the world.

Despite the blank half-season, the actions of the coach were essential in recovering the faith of the players. Lluís was the missing piece of a team with a long-awaited thirst for glory.

Without there being a clear favorite at the European level, the determination and constant struggle of the team in the fight for all trophies is the new norm for FC Barcelona. There are no limits, so the team’s metamorphosis and the brilliant start to the year established a trend where they kill off the opponents from the start. Unbeatable in the recently released Estadi Johan Cruyff, the blaugranas gathered an higher amount of fans than normal for the women’s section.

Taking full advantage of his players, Lluís Cortés is able to find a sense of calm in each match. Never obsessing over mistakes, recovering the ball with great ease, the rapid transitions, and the ability to dominate matches from the beginning are all traits that set this Barcelona apart from their competition. Lluís Cortés’s abilities as a manager stand out from the crowd, as he is determined to guide the team towards the European elite.

The outcome of staying true to Barcelona ideology

Backed by a club that does not cut corners on investing in women’s football, the curtain on the 2019/2020 season ended with the deserved renewal of Lluís Cortés until June 2021. The commitment from the club endorsed the idea of ​​a non-negotiable Barcelona style.

Appointing Lluís in command of the first team revitalized an approach with very clear beliefs: one-touch and win the ball back quickly. Thus, the start of the new course endorsed the clear commitment to controlling the ball and the suffocating pressure after losing the ball. To the beat of a brilliant game, capable of standing out above the exquisite individualities that the squad has, Barça Femení started in a steamroller mode ready to reclaim the throne that belongs to them.

From signings to title aspirations, Barça Femení has become a much more ambitious team in all senses | Photo by Vegard Wivestad Grott / Bildbyrån Imago

In his first full season in the first team, Lluís’s team destroyed all the records in search of conquering the domestic treble and repeating, at least, the successes enjoyed in Europe the previous season. With the title of Supercampeonas of Spain after overwhelming Real Sociedad in the final of the first Supercopa by 1–10, Lluís Cortés seeks to reestablish domestic dominance again in Barcelona. Positioned with an immaculate posture on the table and a nine-point advantage over Atleti, Barcelona won the league after the decision of RFEF.

In addition, the numbers from his time so far support the effectiveness of the Catalan coach’s methodology. Under Cortés, the women’s team have played 52 matches, winning 46, drawing two and losing four, scoring 181 goals and conceding just 27. These are immaculate figures for a coach that was brought in as a quick, mid-season replacement.

What’s left for the season

Lluís has managed to find the perfect harmony between the quality of the team and a nearly perfect deployment as a collective unit. Improving defensively, and with notable growth in the game, Barça Femení faces the most decisive part of the season going into the quarter-finals of the UEFA Women’s Champions League and the semi-finals of the Copa de la Reina.

❛ I am really happy to be sharing this magnificent news that we will continue leading this project. It has been an unusual year, a little strange but packed with success. We have managed to win the three competitions we have taken part in and we hope to continue the success next season ❜

This summer, FC Barcelona triggered the extension clause in the tactician’s contract which prolongs his tenure for another season until 30 June 2021. Culés hope Lluís stays for a long time and he continues to bring joy to Barça fans with some of the most breathtaking and scintillating football ever seen in Spanish women’s football.

• How would Damaris Egurrola fit into Barça Femení?