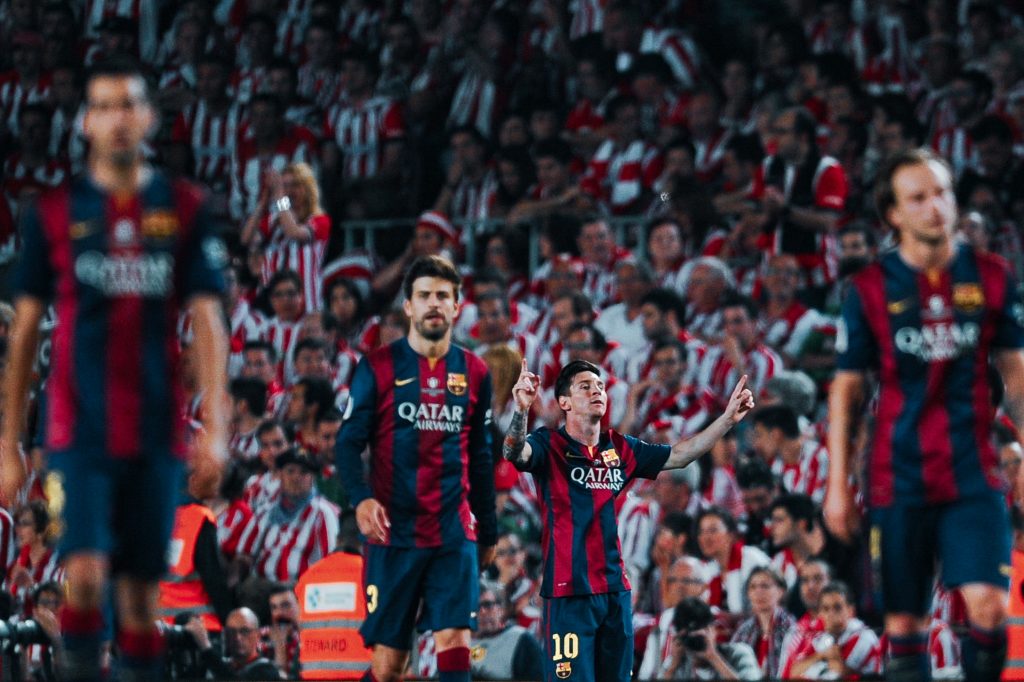 Messi surprises us goal after goal. As much as he scores a fantastic one, he always manages to overcome it while making it look easy. Among the endless mesmeric goals that Lionel Messi has scored, many of them have been against Athletic Club, Barcelona’s opponent tomorrow.

It is no surprise to say that Lionel Messi scores goals out of this world. What we consider a casual goal for Messi is probably the best of any other footballer’s career. The Argentinian stands out for always surprising goal after goal and surpassing himself with plays never seen before. He makes his strikes look easy. Among all the rivals that La Pulga has scored against, Athletic Club is one of his favourites victims, with 24 goals in all competitions.

Not only that, but versus Los Leones, Leo Messi always shocks the world with an ace up his sleeve and the incredible magic that the number 10 almost always displays when facing such club. Now, as Barcelona face Athletic Club tomorrow night at the Camp Nou, it is the right time to remember some of the golazos Messi has scored past them. A better love story than Twilight.

In the round of 16 of the Copa del Rey in the 2016/17 season, Barcelona prematurely faced one of the great teams to beat in the competition. The first leg was held at San Mamés and ended with a 2–1 victory for the locals. In search of the comeback, the azulgranas did everything possible at the Camp Nou. After the goals from Luis Suárez and Neymar Júnior, and with a great performance by Luis Enrique’s men, the goal of the remaining member of the MSN trio was missing. Messi’s goal was missing.

Of course, there had to be a free-kick in this list | Photo by David Ramos via Getty Images

Subsequently, after several attempts in his search for the goal, in the 78th minute, the referee whistled a foul in favour of the Catalans. Leo knew that he had to score to secure the qualification to the next round, and that’s what he did, making it 3–0. A free-kick accomplished in the best way, with a shot at the far bottom corner and in the perfect direction. The ball softly raised to overcome the wall and then went with enough power to the lower right side of the goal of Gorka Iraizoz. Messi tricked everyone.

Undoubtedly, a memorable match. A final, with a 3–0 victory, a clean sheet, and the farewell of the iconic Pep Guardiola, in the epic duel of coaches between him and Marcelo Bielsa. A game where all players had fun and, once again, showed football of another level. Being Pep’s last encounter as the manager of Barça, of course, Messi wanted to score a goal in a special way. The blaugranas got the advantage in minute three when Pedro opened the scoring.

Some time later, in the 20th minute, Messi’s goal came. A stunner. Andrés Iniesta drove the ball a few meters away from the rival area and assisted Leo with a pass that went in between four defenders. Don Andrés, unlike the Athletic players, had seen that Messi was cutting inside the box with great speed and tactical intelligence. With Pedro Rodríguez in between, the opposing defenders thought that the ball was going to him, but he himself knew that it was going in the direction of Lionel. Subsequently, in an uncomfortable position, with a tight angle, and with his less strong leg, Messi was able to find the net with a powerful high shot. How? Nobody knows. But it definitely was an outstanding goal.

After a dramatic 4–0 loss to Bayern Munich, Barcelona wanted to get some motivation on matchday 33 of La Liga. This clash was against Athletic Club and in between the first and the second leg of the Champions League semi-finals. The game started with a goal from the locals at San Mamés. However, the Catalans needed to score to increase their gap on top of the league with three more points, and couldn’t afford to lose. After an atypical first half, Barça began to dominate in the second 45 minutes and, after several attempts, Messi finally found the perfect opportunity.

In the 60th minute, Thiago Alcântara did a wonderful job in midfield and delivered a pass to Messi. The little genius received the ball, held it for a few seconds, and quickly dribbled his way forward. All in a matter of seconds. After having overcome the first player, he easily juggled past the second, then two more with an effective movement, and finally completed a run to the left to accommodate his left-footed shot and score a goal to tie the game. One of the many golazos from Messi against Athletic Club, but this certainly is high on the list. Later, Alexis Sánchez scored what seemed to be the winner, but the locals equalised in the last minute for the final 2–2.

Without a doubt, a goal that we all remember. Especially because it was nominated for the Puskás award in 2015, which is given to the best goal of the year. This was not just any final. Barcelona had already won La Liga, and had qualified for the Champions League final. So it was extremely important to win that Copa del Rey final against Athletic Club to get the domestic duo and puss for the later treble. For this reason, the whole team knew that this match could only have one result: a victory for the Catalans.

A Copa del Rey final at Messi’s own temple: the Camp Nou | Photo by David Ramos via Getty Images

In the 20th minute, Messi made a piece of art. Not even in the Louvre museum can we find any similar work. It all started with the Argentinian receiving the ball very close to the halfway line and in the right wing. Later, very calmly, he easily beat the first opponent with a feint. Then another player approached for defensive help and, the one who had already been beaten recovered his position to defend the Argentinian.

None of this was an obstacle for Messi, though, who passed between both brilliantly. Seconds later, another defender was unable to reach him and Leo made a devastating and powerful run into the opposing area. With enough patience, but at the same time explosiveness, the tiny magician found space to unleash his own shot between three defenders, sending it powerfully towards Iraizoz’s net and scoring a golazo. Messi opened the scoring in the way to a 3–1 victory. In a list of many, this perhaps was his most iconic goal against Athletic.