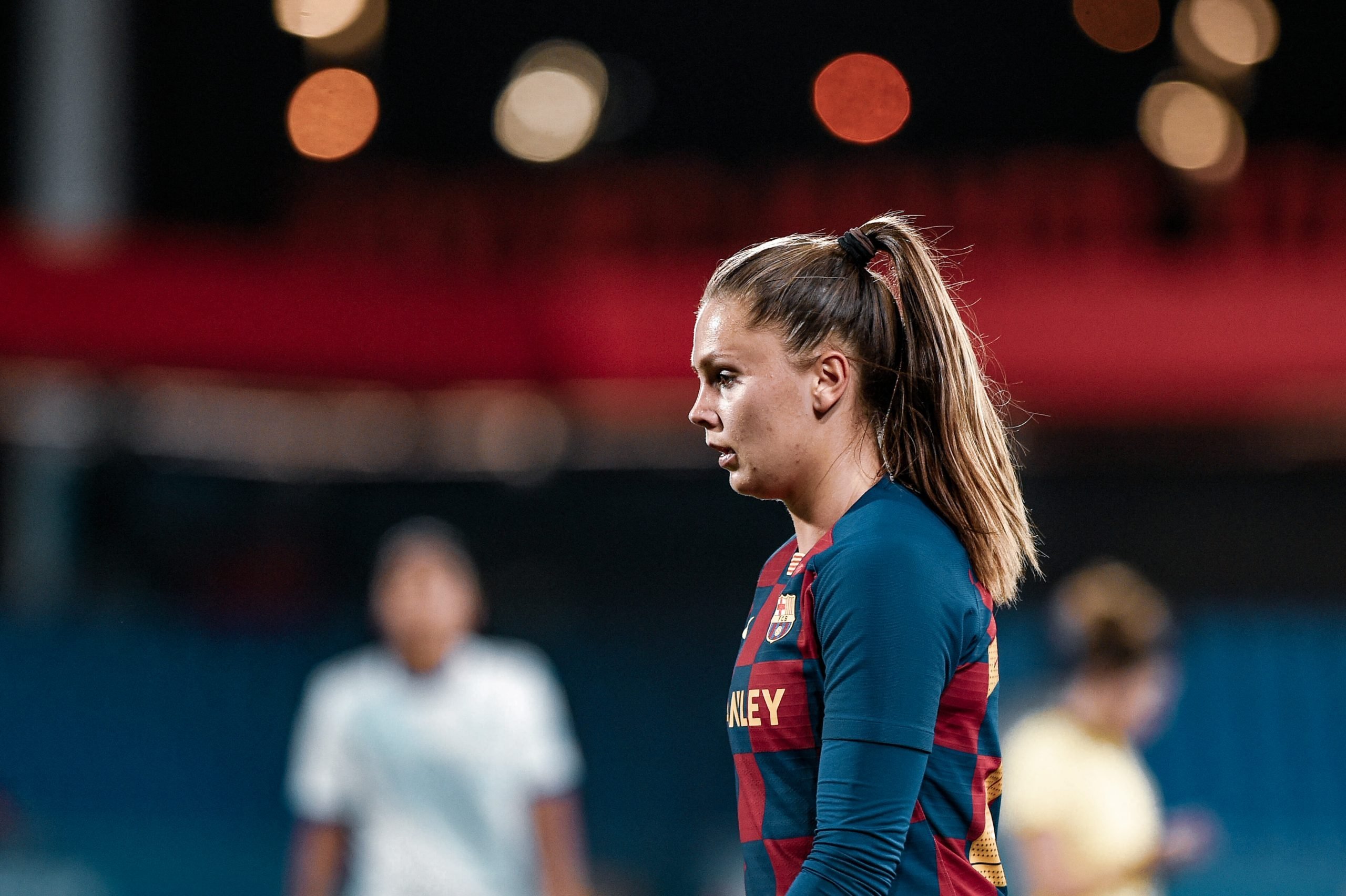 Inspired by Ronaldinho and disciple of a Johan Cruyff’s football, Lieke Martens arrived at Barça Femení in 2017 to fulfil a dream and to revolutionise the blaugranas too.

Lieke Martens, the former FIFA Best Women’s Player of the Year and World Cup finalist has been one of the standout performers for Barça Femení since her return from a toe injury. She followed it up with a sensational curler against France during the Tournoi de France. She has displayed some jaw-dropping performance since coming back and is often and deservedly called as the Queen by the blaugrana faithful.

The 27-year-old might disagree due to her humility, but she is one of the stars of the women’s game. Quick and powerful, the forward was thrust into the public eye with her performances three years ago, as the Netherlands won the European Championship on home soil. Her Cruyff turn, back to goal, to take out two Belgium players, leaving one on the floor, as she drove forward at Euro 2017, is a taste of her ability to trick and turn her way out of the tightest gaps.

Named player of the tournament, she then joined Barcelona from Rosengard. On the back of that, Martens who has already won over 100 caps for her country was named UEFA’s female player of the year for 2017, going on stage to collect her award alongside Cristiano Ronaldo. She also won the FIFA Best Player prize for that same, memorable year. As she later admitted: “My life changed radically after the Euro”.

Growing up, Martens never dreamed about playing for the Netherlands or being named the best player in the world. She only dreamed about playing for Ajax – the men’s team, because that’s all that was there to dream for when she was younger. Wherever the young Martens went, she had a ball with her, always playing either with her brothers or that always-faithful companion: the wall. Born in the small town of Bergen, she had to play on boys teams until she was 16 simply because there weren’t girls teams around. She was called into the U–19 national team at the age of 15, and she has to move to Amsterdam alone to be a part of the team.

“I started playing football at the age of five and I don’t think I’ve stopped since. I wanted to be like Ronaldinho and tried to copy his tricks in my back garden. To have been able to wear the same FC Barcelona colours as my hero still makes me smile every time I think about it. Football has become my life and I want to share that life with you”

Lieke Martens began her career in her native Holland with Heerenveen before moving on to VVV-Venlo. The forward then played in Belgium where she won the Super Cup with Standard Liege in 2012. Martens then went on to play in Germany with Duisburg and in Sweden with Goteborg and then Rosengärd where she won the Cup and Super Cup in 2016. After being the top scorer at the U–19 Euros in 2010, Martens debuted with the senior national team soon after in 2011. Then in 2015, at the age of 22, she scored the Netherlands’ first-ever Women’s World Cup goal.

There are certain similarities with the late Cruyff in the way she plays, and there is also the Barcelona connection – Johan Cruyff played for Barça before revolutionising the club in his time as the coach at the Camp Nou.

Martens needed time to adapt after arriving in Barcelona, where she has also had some injury problems, but she quickly settled into the Barcelona way of playing, a style that is Cruyff’s legacy, the pillar of Dutch success.

With 20 goals in 29 games for Rosengard, she could have had her pick of Europe’s top sides, but Barcelona were the ones to sign her. With the Catalans’ investment in their women’s team a new development, the signing of Martens was a statement of intent. Barça scouts with the Femení are one of the best, I would say. Signing Martens, Caroline Graham Hansen, Asisat Oshoala and Jennifer Hermoso would not have happened without a proper plan.

It should be remembered that Martens stood out at Barça in 2017 after winning the European Championship and individual awards such as the Best Player in Europe, or The Best. Her fame led her to become the first transfer for which Barcelona paid in women’s football, thus demonstrating the great commitment to the Dutch lioness, who responded with 28 goals in her first two seasons.

“I signed before the Euros. For me, it was really important to sign before, so I was clear in my head and free for the Euros. I am happy to have signed a contract with FC Barcelona. I have always been a great follower of the Club and it is a great honour for me to now be a Barça player. I played against Barça some months ago in the Women’s Champions League and I liked their style of football a lot. They are a very technical and tactical team with great players. I hope to win trophies with Barça and, of course, do well in the Women’s Champions League”.

Lieke Martens, on signing for Barça

Despite being right-footed, Martens prefers to play on the left-wing where she can take advantage of her technical ability and dribbling skills. She is a danger for opposing defences thanks to her pace and her eye for goal. The winger is an expert dribbler, a superb reader of the game and is able to dictate the rhythm of the play. She is very lethal at her position, often sprinting down the sideline into open space, crossing the ball and beating defenders in one-on-ones. She can score and play a role in defence as well. Being well disciplined, she can push through physical pain when needed. She usually plays near the sidelines but occasionally moves to the middle of the pitch.

Lieke Martens has a strong penchant for both creating and scoring goals. At times she can be also used as strikers due to her exceptional finishing skills. She is very fast with commendable speed and acceleration before delivering crosses to the striker. She has that technical astuteness to build up the play with the midfielders to then cut through the defence.

Being unpredictable is one of the main aspects of Martens’ game, as she has a wide variety of ways to get in behind the backline:

It is always going to be guessing game for the opposition defenders when they go against Lieke.

She is a physically demanding player in the position on the field. She can jog back and forth across the pitch and sprint long distances. As a winger, she finds the best positions to receive a pass or a through ball from teammates. Very often, she positions herself out wide by the touchline creating spaces for the midfield to exploit.

She has several options for advancing during attacks:

It is difficult so see Martens losing possession inside the opposition box, she defines the attack and understands when to run through the defence and when she needs to retain possession.

She can constantly beat players down the sideline and run into space. She has that dribbling ability which is deadly. She can cross the ball when she receives passes near the sideline or head straight for goal when she makes runs towards the middle of the pitch.

At times she will just wait for her time in the sidelines looking for good opportunities to dribble. She consistently takes on opposing wingers or defenders in one-on-ones, where she tends to come out victorious.

Crossing ability and hunger for possession

Her left-footed crosses are of pure quality and can be watched in the repeat mode. If we say, Messi has that golden left foot, then Lieke has the golden crosses in women’s football. No matter how many times she is kicked, harried, fouled, she always want there to have the final word. She picks herself up off the floor for the umpteenth time and will demand for the ball and drive the team forward with her wizardry on the wing.

How well she has fared this season

Martens started the season by announcing her contract extension with Barcelona until 2022. But due to the bad luck with the toe injury, that she picked up during the season and got significantly worse during the Women’s World Cup, Barça missed Lieke Martens this season until late December. The Dutchwoman started the season injured and, although she joined the group in November, she was not at 100% but still managed to tally with only 8 assists and 2 goals in 10 games played so far. The numbers were far from those produced by the Dutch star. Since her return, she has produced some fine displays like the one against Atlético de Madrid in the Super Cup.

As things stand, we can see some fine partnership building between Caroline Graham Hansen and Martens. Two of the best wingers in the same team and if they can get the partnership clicking then another Champions League final is on the cards. Martens is a big game player and she lives up to the reputation in high profile matches just like she did against Atlético with a fine display scoring a goal and assisting another with a man of the match performance.

Martens on a young girl chasing the dreams

Lieke Martens is one of those athletes whom most of the young girls in the Netherlands look up to. From being a girl who dreamt to become a professional footballer, she has become the idol of many. And she has written her own legacy in the history book of women’s football. She continues to inspire and make the younger generation believe what they can achieve if they follow their dreams. From being a fan of FC Barcelona to becoming a facade of Barça herself shows how determined she was with following her dreams.

“Dreams are funny things, aren’t they? Why do we dream what we dream? For instance, you could say this past year has been a dream come true for me. Winning the Euros at home in Holland and becoming the player of the tournament. Signing for Barcelona, my favourite club. Sharing a plane with Lionel Messi”

What to expect from her for the rest of the season

Once things get normal and football is back, so will Lieke. She would be another factor deciding the outcome of Barça Femení. Hopefully, she gets enough rest and remains injury-free so we can enjoy the Dutch maestro in full flow with her array of trickery and long-range bangers.

And becoming the first women’s player to be on the poster of Camp Nou, she is undoubtedly the Queen of FC Barcelona.

Personal quotes from one of the editors of Football Engine: “Lieke is one of the players that made me fall in love with (women’s) football again. Her grace, technique and first touch are something special. Her elegancy on the ball is something you rarely see in the game (men or women). At the same time, she’s got the pace and power to beat defenders one on one”.