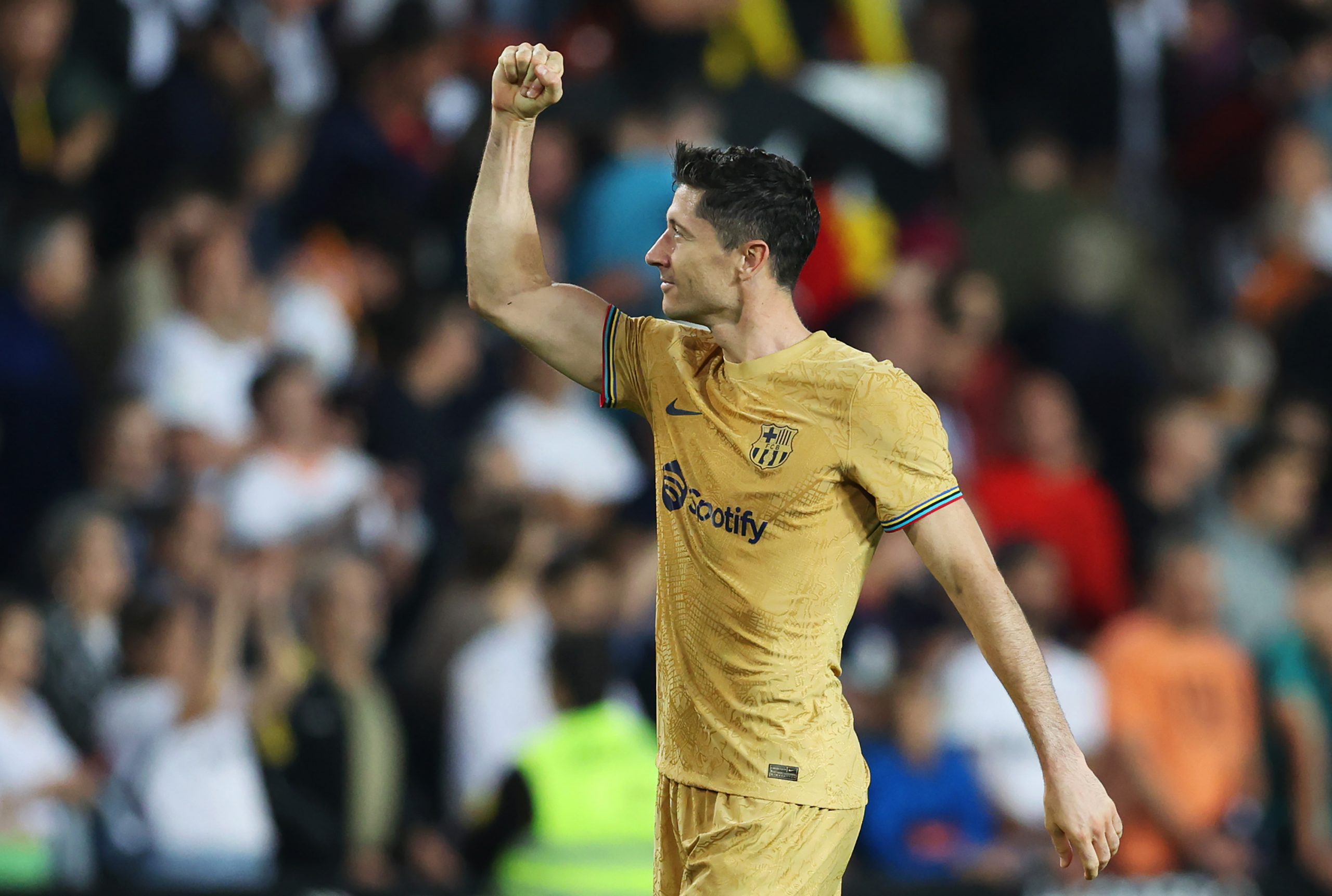 Robert Lewandowski has taken La Liga by storm since joining Barcelona from Bayern Munich in the summer transfer window.

The 34-year-old is leading the goalscoring charts in the Spanish top flight, netting 13 goals in 12 matches while he has also added five in the UEFA Champions League.

Lewandowski’s latest strike was the winner in Barcelona’s narrow 1-0 triumph over Valencia this past Saturday at the Mestalla, which has helped them close the gap down to leaders Real Madrid, who dropped points versus Girona on Sunday.

The Poland captain sat down for a detailed interview with La Vanguardia during which he discussed the reasons behind his choice to sign for Barcelona, the role of Xavi, president Joan Laporta as well as the title race with Real Madrid, among many other topics.

On the win against Valencia: “Winning at Mestalla was very important. Scoring in the 92nd minute is a huge step forward for the team. It helps us understand that if we fight to the end we can win matches. The league is very long but these matches are necessary to look forward and fight for the title until the end.

On his adaptation at Barcelona: “It was very easy to adapt from day one. My first communication with my new colleagues was very good. I tried to communicate with them both on and off the field. It’s a group of players with huge potential but also great people.

“I’m in the club I want and when you feel relaxed and happy, everything is easier.”

On his decision to join Barça: “I’m in the right place even though I know the first season won’t be easy. But it was a huge challenge for me, sometimes you have to get out of your comfort zone and take on new challenges in life. I am happy because I am experiencing new things as a footballer and as a human being.”

On why he opted not to continue at Bayern: “I had a wish in my heart. When I was young, I watched Barcelona matches on TV and remember how they played and the players they had. They were great names and for a young man it is something that stays in your head forever.”

On not joining a Premier League club: “I’ve played many times against English teams but I wanted to be in the team that I’ve dreamed of since I was young and where I’ve always wanted to go. Not only do I feel comfortable in Barcelona, ​​but I am also proud. I’m in a very beautiful place.”

On what makes Barcelona so special: “From the first moment I felt the support of everyone. I went to America in pre-season, spent time with the coaches, my teammates, and the fans, and I felt unbelievable things. Even though we were outside they shouted my name in the stands and it means a lot to me.”

On the atmosphere at Camp Nou: “As soon as I got on the field I felt something magical. As if all the history that surrounds Camp Nou was floating in the air. Even if you’re tired, the support from the stands gives you the energy to win matches, it’s unbelievable.”

“Even with my age and experience, which has allowed me to experience many things in the world of football, I feel new things and emotions at Camp Nou.”

On the elimination from the Champions League: “Obviously I’m not happy, Barcelona should be in the last 16. But before I came to Barça I was already aware that the first season could definitely be more difficult than it should be. We are in the process of rebuilding which takes time, we must be patient.”

On the matches against Inter and Bayern Munich: “Matches like those in Munich or Milan change you. We have a lot of youngsters who need to gain experience and learn to find a way to win these types of games. It’s small details. You have to face some situations with more intelligence.

“In football sometimes you have to know how to win and not how to play to win, and that’s what happened to us. But these things will make us stronger in the future.”

On whether he is optimistic for the future: “I’m sure these setbacks will make us grow as a team and that everything will be different next season. We are evolving. I wasn’t expecting to arrive and that everything would go well in season one. I insist that it is a process that requires time and patience.”

On whether he is a mentor to the youngsters at the club: “I think with my experience and my age I can help them. There are players who have had a short time at Barcelona and they are very young, but I think going to the World Cup, for example, it will be useful to gain experience, that’s what happened to me.”

“After my first major tournament with Poland, I became a better player. Of course, when next year begins, many of the youngsters in Barcelona will be better footballers. And not only with the ball but also when it comes to taking responsibility within the team. Time is in their favour.”

On the rebuilding at the club: “I always wanted to win but I’ve learned that sometimes you have to hold back and wait for the best moment to move forward. With all that Barcelona have gone through in recent years, you can’t expect everything to change in a month. It takes time and the situation is definitely getting better, and we will be the best again.”

On Lionel Messi: “Messi is a legend and a great player, what he achieved here is unimaginable.”

On a trait that Bayern Munich had but Barcelona don’t: “Bayern have been very stable for years. They may not play well. Against us, for example, they weren’t better than us in Munich, but they won in the end. And that’s the stability Barcelona sometimes need, but it’s not easy.”

On why Barça have lost that trait: “Because the club is going through a difficult time and then we had six sudden injuries in the last international break. It was a complicated moment because we had to play several matches without 5/6 players.

“The losses in defencee were particularly important and that made us lose that stability. We were growing as a team and suddenly stopped.”

His thoughts on Xavi as manager: “He knows what we have to do and even though he doesn’t have much experience everything he’s had in his amazing career as a player I think helps him improve.”

“Every coach is different and I don’t like to compare them. I have been fortunate enough to be under the leadership of the best in the world and now under Xavi to try completely new things. He explains everything and every player knows exactly the reasons for doing the things we have to do.”

On the role of a striker: “The fans only care about goals. If the attacker does not score automatically it is because he played poorly, but this is not the case. Aside from scoring it is very important to help the team with the moves so that the ball gets to the right place.

“The only way to win is as a team and the striker not only has to think about scoring, he also has to help create goals. You always have to go one step further.”

On the Ballon d’Or: “An award but it’s not something you think about every day. I didn’t come to Barcelona to win it, as some have said. is a lie. I don’t have the idea of ​​the Ballon d’Or in my head, I have achieved everything I ever wanted and I have it in my heart.”

On Thomas Muller: “A funny guy, he talks a lot, a Bayern legend.”

On president Joan Laporta: “A president who did a lot for Barcelona and it wasn’t easy. The club was in an awkward position and he improved it. We are all trying to make the club grow.”

On Bayern Munich: “The club where I had a lot of success, those I dreamed of. I will always be grateful to them. I did everything for that shirt but now I’m here.”

On Pedri: “An impressive player and part of the new generation. He has huge potential but he is already in the right place at the right time. In the coming weeks, he will take more responsibility and be a better player and that will be noticed.”

On Real Madrid: “Our biggest competitor. I hope we are ready in time to get past them.”

On not following the family tradition of playing volleyball: “I never had to choose because football was my passion from the beginning and that was what I wanted to do. I might have played volleyball well but I knew I was too short because you must be at least 1.90m tall.”