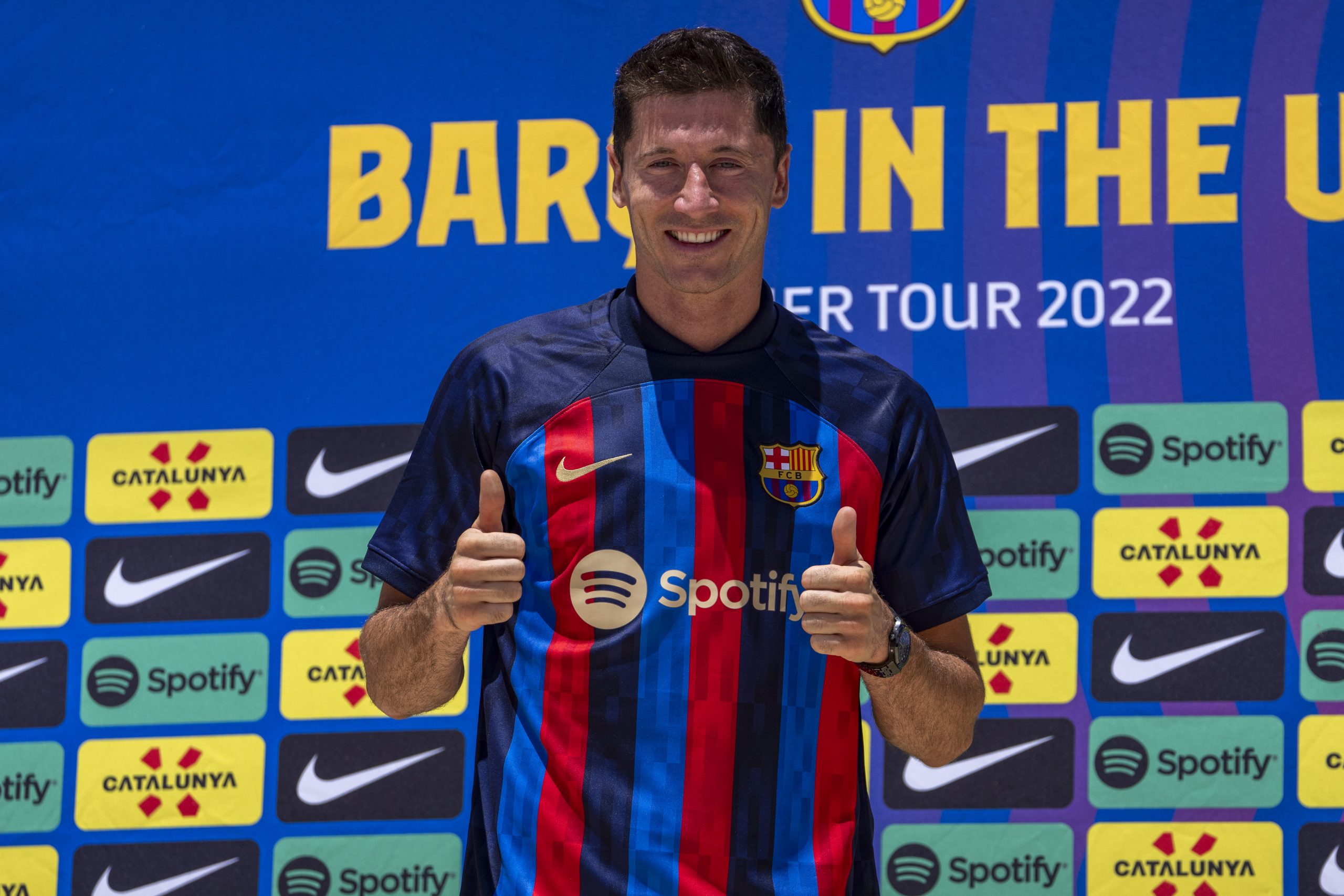 Barcelona, much like any other top club in the world, understand the need to create hype. Sports fans are drawn to it like moths to a tube light.

Said hype is generated in various forms. Most recently, it is giving Pedri the #8 jersey, a season after handing Lionel Messi’s #10 to Ansu Fati. Both still teenagers, they have the weight of the world on them, but a lot more support as well.

Hype is having Messi do a photo shoot with an actual goat ahead of the World Cup. Or a photo shoot with GOAT as your sponsor. It is also dramatic official announcement videos, transfer gossip, and of course, stadium presentations.

After all, what says hype more than a professional footballer at his new club, in a new stadium, doing keep-ups, around the world, and if you are Ronaldinho, maybe even more. Fans love it, and we totally get why.

Barça, as one of the most supported football club in the world, have the honour of boasting magnificent player presentations at the Camp Nou.

While Cristiano Ronaldo’s presentation at the Santiago Bernabeu in front of 75,000 fans takes the cake, the Catalans have seen two of the top five biggest player presentations in the world ever.

Their personal record sits with Zlatan Ibrahimovic, who drew 60,000 spectators following his sensational move from Inter Milan in 2009. More than 55,000 also came to see Neymar for his official presentation, while Fabregas and David Villa showboated in front of 35,000 fans.

Most of these are big signings, but only the biggest, the marquee signings, witness as many as 60,000 fans flood to the stadium to watch them sign a piece of paper and juggle the ball.

Well, as it so happens, Barcelona may have pulled off one of the biggest marquee signings in their history this summer, acquiring the services of none other than Robert Lewandowski from Bayern Munich for €45 million.

The Pole is a fantastic player, but you realise just how fantastic when the numbers sink in.

He has scored 34, 41, and 35 goals respectively in the last three seasons in the Bundesliga alone, while netting 33 goals in the Champions League alone during the same duration. This, of course, includes the record-breaking 2019/20 season when Bayern Munich won the UCL breaking all records.

Barcelona fans obviously lean towards Luis Suarez as the striker they prefer, but that, in no way, shape, or form mean they won’t appreciate Lewa. In fact, we think his official unveiling and presentation – scheduled for 5th August, could break Zlatan’s record.

That hypothesis is based on the fact that Barcelona have prepared everything in the hope that it does.

Firstly, Camp Nou is undergoing some renovation work, which means the club has presented all new signings so far at the Tito Vilanova training ground, including Jules Kounde’s on Monday.

Fans have not been able to attend any of it, and will want to attend the only one remaining – so far.

Secondly, they’d planned it after the USA tour in the hopes that the Pole could create some extra hype through his goals. While he has not done that, there is an evident burning desire in his game to want to score, which has impressed fans on social media.

Finally, Barcelona have literally handed out free tickets to everyone, with a special window for members, who hold six tickets each. While presentations like these are usually overpriced, attending it for zilch certainly is huge incentive.

Either way, should Lewandowki be able to break the 12-year record, the presentation on his shoulders will only increase. But as we have seen in the past, he thrives on pressure.