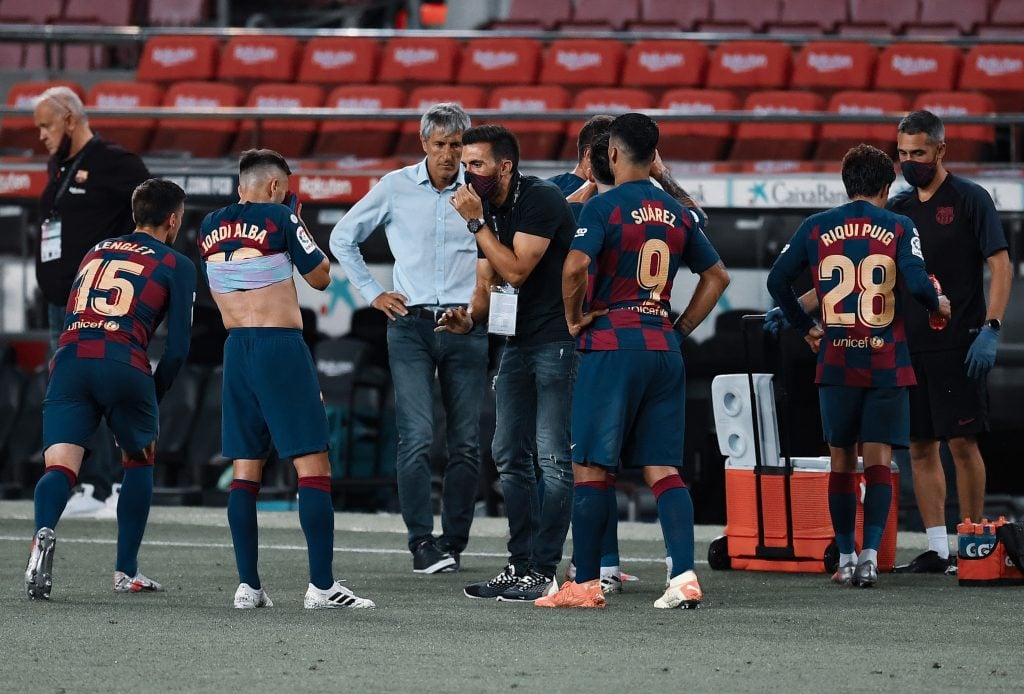 Just one substitution out out a possible five was made till the 85th minute at the Camp Nou in a must-win game against Atlético de Madrid. Such late substitutions to setbacks has already cost the team points previously, and now put the title out of reach: is this the beginning of the end for Quique Setién?

The stakes were high, potentially a title decider, as Barcelona hosted Diego Simeone’s Atlético de Madrid. 90 minutes in, the hosts found themselves in desperate need of a goal to salvage two very critical points. Yet a certain 120-million-euros attacking reinforcement was seen spectating from the sidelines. Just one change had been made up until the 85-minute mark, the coach looking as clueless as the players about what to do.

“What we have to do is try to convince everyone that we have to defend a common idea. I have no problem in admitting that this level is new to me and that I’m in a learning process”

Quique Setién
on his relationship with the team

Saúl Ñíguez scored the second equaliser for the visitors as early as the 62nd minute. There was more than sufficient time to bring about a change in approach and personnel, and show more intent of scoring that winner past Jan Oblak.

The resumption of football after the break has seen a new ceiling of five substitutions per side. Five changes can completely alter the course of a game, especially with the bench quality of FC Barcelona. Quique Setién was certainly not short of options. He could count on any of Ansu Fati, Antoine Griezmann, Martin Braithwaite, Arthur Melo or Álex Collado to create more of a threat going forward. However, the first attacking change was only made in the 85th minute.

To add to the situation, Luis Suárez was having an extremely poor game. He had fewer touches than goalkeeper Marc-André ter Stegen and no shot on target after his attempt in the second minute. The Uruguayan looked uncomfortable making runs too and often mistimed them. Given that he is just coming back after recovery, was is necessary to play him for the whole game?

“Because we were doing well, Riqui was doing well, we always try to have Suárez and Messi on the pitch. I didn’t want to destabilise the team”

This reflects a state of panic in the mind of Setién. Every time the team finds itself requiring an urgent goal, we see his mind go blank. Either he doesn’t trust the players on the bench, or is scared to take off the big guns from the game even when they are misfiring. One could say that he was hesitant because his job is suddenly in jeopardy, but this isn’t the first time. 81 minutes into the stalemate at Celta’s Balaídos and only one out of five changes were made. At Sevilla’s Ramón Sánchez Pizjuán, it took him 77 minutes to make the second change.

Substitutions so late in the game are ridiculous because no player can be expected to make a difference in the final five or seven minutes, and it is something Quique Setién must certainly improve on.

There is no doubt that there has been an improvement to the brand of football played under Setién. The team looks more energetic, wins the ball faster and moves it quicker. But this only lasts for certain spells of the game. Under pressure, Quique Setién often struggles to make the right call and is late to react to the situation with substitutions or adjustments. He barely ever makes tactical changes midway through the match, and the situation seems to be getting worse for him. Having already lost the dressing room and board, the road ahead doesn’t look too bright for Quique.

Indeed, the struggles at the club are much more deep-seated. But an immediate solution involving changing the board or footballers is out of reach. For any chance at the Champions League, there is a need for someone who can think of their feet at the helm. Unless Quique Setién makes some drastic changes in his approach, the end could be near.