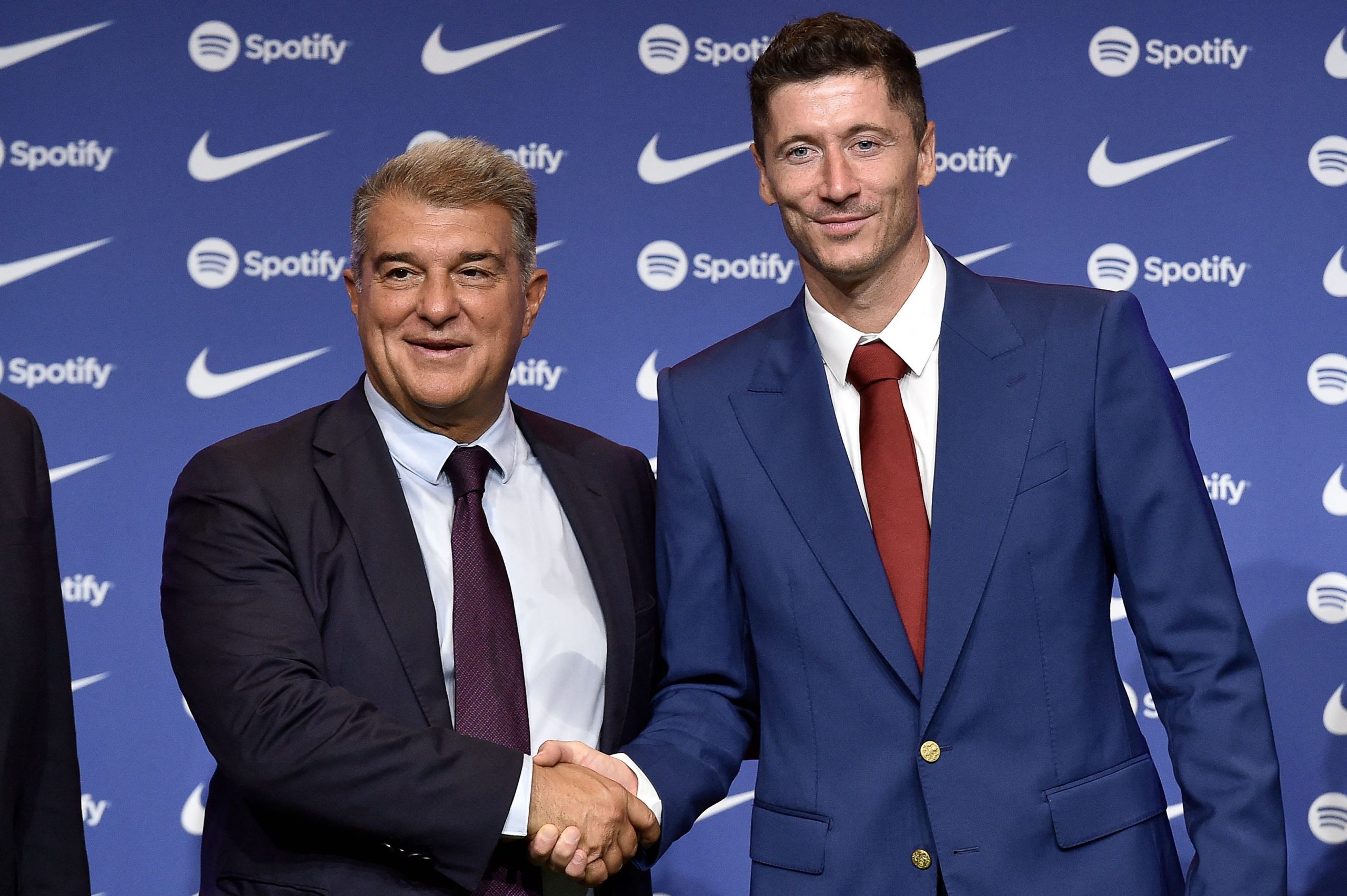 Barcelona made headlines with their capture of Robert Lewandowski in the middle of last month.

Unfortunately for the Pole, the club were experiencing their pre-season trip to the United States, meaning they were not in a position to officiate the striker at Camp Nou. Nevertheless, they managed to hold a presentation in the city of Miami.

But having returned from the US camp, Barcelona have officially unveiled Robert Lewandowski at Camp Nou this afternoon, with Joan Laporta once again heaping praise on the striker for his desire to join the club.

“We worked hard to get Lewandowski. And we succeeded. Thanks to Lewandowski first, then to Zahavi. The same for Alemany. And for the rest of the team.

“I have a very special relationship with Lewandowski’s agent. I told him if there were any chances of signing him and he answered ‘yes’. We contacted Bayern and Mateu Alemany has done a fantastic job.

“It wasn’t easy, this operation came to fruition because Robert only wanted to play for Barça,” Laporta said, before going on to thank the Pole for his efforts.

“Robert, I want to thank you for your efforts to come to Barça. Thanks to all the fans for being here today. Barça is more than a club,” he added.

Laporta revealed that Lewandowski always had admiration for Barcelona and as a teenager, he had promised his mother that he would play for the club.

“20 years ago, Lewandowski came to the Camp Nou with his mother. And, while touching the grass, she told him: ‘One day you will play here’.”

Lewandowski, who is coming on the back of a successful spell at Bayern Munich, is set to become Barça’s main goalscorer for the season ahead. He is also expected to take up the number nine shirt from Memphis Depay.

When asked about Lewa’s number nine kit, Laporta added: “Lewandowski with the number 9? For reasons that interest the club, for image and advertising issues, we have made this decision, with respect, yes, to Memphis, who has understood it perfectly.”

Although Barcelona have managed to sign no less than six top-quality individuals in the month of July. They are yet to register any of them due to their financial crisis, although Laporta is confident the club will not face any altercation with La Liga.

“We have worked to be able to register all the players, not just Robert. We have worked well to meet the requirements. And if another operation is necessary, we will do it. The documentation has already been submitted and we are waiting.”

“We have complied with everything La Liga asked for and I’m convinced that everything is fine,” said the Barcelona president, before adding that the club are currently on a healthy path and are on course to building a great team, after overcoming their financial crisis.

“Barça have carried out operations in these months for a value of 868 million euros. We have positive funds and a healthy balance sheet. We have sold club assets but in a controlled way.

“A year ago, sadly, we had to announce a situation that we did not want (Messi’s departure)… But in a year we are turning that situation around. Barça have left the hospital and is healthy.