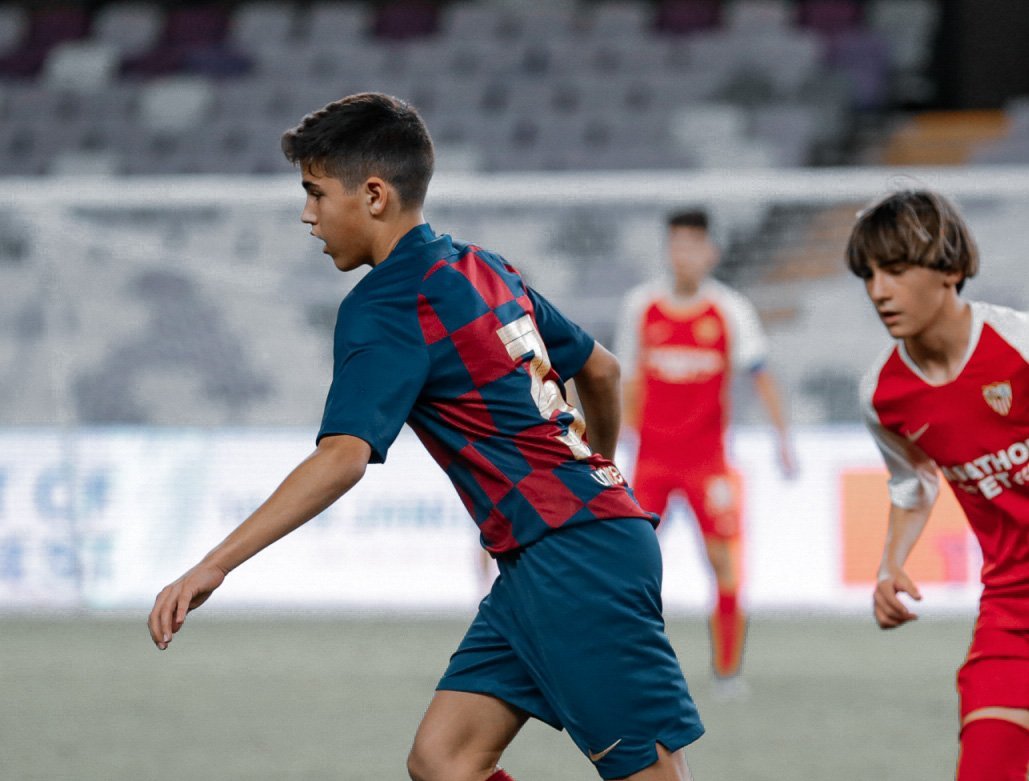 A close look of La Masía centre-back Pau Cubarsi. A review of his profile, playing style and what to expect from him for the future.

Admittedly, centre-back hasn’t been a favourable position for Barça’s academy in terms of talent development in recent years. However, the 2007 generation is rising strongly and is here to prove everyone wrong. Landry Farré is already competing with players one year older than him at the Infantil A, while Andrés Cuenca, signed in the summer from Sevilla, and Pau Cubarsi form a stellar partnership at the Infantil B. None of them can be overlooked, and Pau Cubarsi, this week’s protagonist, reunites all the qualities a La Masía and Barcelona defender must possess.

Born on 22 January 2007 in the small town of Estanyol, Girona, Pau Cubarsi started playing football at FC Vilablareix. He soon moved to the province’s biggest club, Girona FC, where Pau Cubarsi began to attract attention from Barcelona’s scouters. It was while playing for Girona’s Alevín that the blaugranas decided to make a move for him. Aged only 11, Pau Cubarsi moved to La Masía in the summer of 2018. He was one of the 63 signings made by Barça’s academy on that window, as he was added to the Alevín A’s squad in the same year as midfielder Dani Ávila.

Andrés Cuenca – left – and Pau Cubarsi – centre– are two of the most promising defenders La Masía has at present, and both play for Albert Puig’s Infantil B | Photo by Fundación JRM

Experts in youth football always say that the best time to recruit a talent is when he still is playing in 7-a-side football. The younger they are, the easier it is for the boys to acquire knowledge. At that age, the kids truly are like sponges, and they are ready to absorb anything. Barcelona’s style and methods are unique, so assimilating all the required concepts from a tender age and spending many years at La Masía undoubtedly is a huge advantage for these youngsters, like Pau Cubarsi, that dream of one day playing at the Camp Nou.

Pau is a natural defender that in Fut-7 has acted both as a centre-back and full-back in a back 3. That said, as he develops he may become master of the centre-back role. There are many things in the football of Pau Cubarsi that are clearly reminiscent of those of another La Masía graduate and successful centre-back, Gerard Piqué. Obviously, one of the main attributes to highlight from both is their height and thus dominance in aerial duels, both in the own and the opposing boxes.

Nevertheless, it is difficult to say how tall will a 12-year-old be once he reaches adulthood. What is clear, though, is that they both have that attacking spirit and impetus to go forward. In fact, in spite of being a defender, Pau is the third top goalscorer for Barça’s Infantil B in this Preferent Division. Lamine Yamal is the team’s most prolific goalscorer, with 9 goals, followed by Ángel Jiménez, with 6, and Cubarsi, who has 5 in 9 matches. An impressive figure for someone that by no means occupies the final third permanently.

As well as his aerial prowess and offensive abilities, Pau is a joy to watch when taking the ball played from the back. He never crumbles under pressure, but moves the ball forward with expertise and an admirable sense of superiority and calmness. By slowly carrying the ball, he attracts the opponents before using a body feint and accelerating to leave his rivals behind and break the first pressing line.

When you talk about a defender, however, you obviously have to focus on his defensive capabilities too. Pau clearly doesn’t lack talent in his own half either. A strong and imposing figure, the former Girona prospect wins most duels with his physique but also reading of the game and anticipation. Meanwhile, when facing a forward that is physically superior to him, he uses his cognitive aptitudes to win the battle. For example, against Sevilla in the semi-finals of last summer’s La Liga Promises – which Marc Serra’s Alevín A ended up winning –, he had to deal with Ibrahima, a 1.75-metre giant. Even so, Cubarsi used his intelligence and positioning to always be on the winning side.

Like Piqué, Pau isn’t the type of centre-back that will throw himself into the floor in the first exchange. Instead, he will remain composed, readjust his position and annoy the attacker until the very last second. He prefers not to jump straight into tackles, but to measure distances properly and act rationally. And that’s a great virtue. As Paolo Maldini once famously said, “if I have to make a tackle then I have already made a mistake”.

What does the future hold for Pau Cubarsi?

Of course, we are not trying to say that Pau is the new Maldini, nor the new Piqué. He does possess, though, a commendable maturity and some qualities that any Barcelona defender should have and that make of him an extremely promising player to watch for the future. Pau Cubarsi is only 12 years old, soon 13, and this is just his second season at La Masía. So anything can happen. Patience.

Episode 14: Iker Bravo
What did you think of this article?