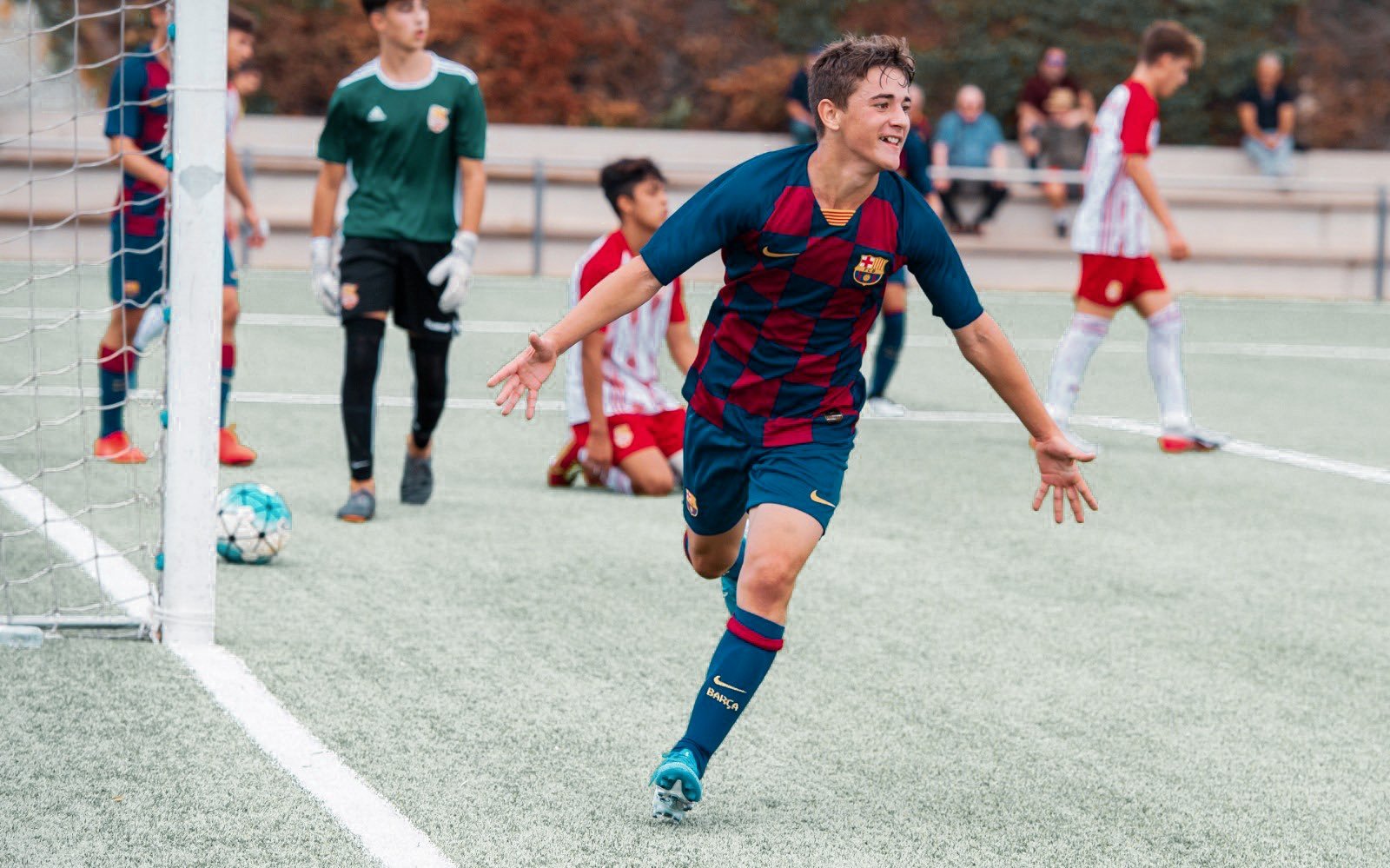 An in-depth review of La Masía rising star Pablo Páez, or Gavi. A look at his profile, playing style and expectations for the future.

The history of FC Barcelona is rich with delightful and iconic midfield maestros that have left their mark at the club. Through their deep positional understanding, eye-catching technique and inventive nature, they have captivated viewers while making an impact at the Camp Nou. Adding an extra name to the list would seem easy as the number of successful examples in the past is tremendously large, but the pressure had never been as high.

Football these days has become a continuous search for idols and heroes, thus making expectations terribly high for anyone that has shown promising glimpses in this demanding world of sport. There are times, though, when the journey has been fascinating enough to justify all fine words directed towards an individual. Future is always uncertain with teenagers, but 15-year-old Pablo Paéz Gavi hasn’t needed to take a step in professional football to attract La Masía enthusiasts with his pure quality and progressive evolution.

Pablo Páez Gavira, also known as Gavi as an abbreviation to his second surname, was born on 5 August 2004 in Los Palacios y Villafranca, a city of fewer than 40.000 inhabitants where, curiously enough, footballers Jesús Navas and Fabián Ruiz were raised too. Los Palacios is located in the province of Seville, in southern Spain. Pablo began playing football in his hometown club La Liara Balompié as a Prebenjamín, but he didn’t last long there, since he soon moved to the academy of Real Betis. That’s where his talent started baking, as he played for Betis from age 8 to 10. His 96 goals in a domestic season with the Benjamín A caught the eye of all Spanish giants, among which were Real Madrid, Atlético de Madrid, Villarreal and, obviously, Barcelona.

Pablo Páez Gavi joined La Masía in 2015, and he hasn’t looked back since | Photo by FC Barcelona

Gavi ended up choosing to wear the blaugrana colours and, ahead of the 15/16 campaign, Pablo Páez made the move to La Masía. However, with the FIFA sanction overflying Barcelona, the boy had to wait until January 2016 to get registered with the Catalans. It was a difficult time for him as he yearned for his debut with the culés, but, once he was finally allowed to play, things weren’t much easier for him either. In the III Torneo Solidario Vicente Ferrer – Sant Cugat Esport against rivals Espanyol, he scored the equaliser of the game but, after an accidental crash with the opposing goalkeeper, he broke his nose. He had to go through surgery and miss roughly over a month of action.

Notwithstanding, Pablo Páez, renowned for his determination and tenacity, won the league title in his first course at La Masía, as Gavi himself scored a brace in the encounter away against Tecnofutbol (5–11) that handed them the domestic trophy. That Alevín A coached by Marc Serra was unbeatable, as they won all 28 games of the competition. That same year he would have to face none other than his former Betis in the final of the Torneig de Falles. The Sevillan kid netted one of the two goals in a 2–1 victory from the azulgranas, as he was also named the hottest prospect of the tournament.

When he started attracting attention from a wider audience, though, was in the prestigious La Liga Promises in December 2016. In the semi-finals against Real Madrid, Gavi was the hero as he scored a brace in a 2–0 victory. The first one came right after kick-off, following a recovery and back heel assist from teammate Xavier Planas, and a calm left-footed shot from Pablo to beat the goalkeeper in the one-on-one. Then, in the second half, he would complete his double with a trademark solo goal, this time with his right foot. After the miniclásico triumph, Barcelona advanced to the final, where Barça’s Infantil B would face and defeat Atlético de Madrid by 6–1.

From being considered the best Alevín in Andalusia – the large autonomous region of the south of Spain –, to being one of the most exciting gems in Barcelona’s academy. Gavi‘s progression in the past years has been very steady and satisfactory, and it doesn’t look like he will slow down anytime soon. In fact, Pablo Páez has quite clearly been one of the best players at La Masía this season as he has been shining in Sergi Milà’s Cadete A. While being part of a very promising 2004 generation that includes Diego Almeida, Arnau Casas, Marc Jurado, Biel Vicens, Xavier Planas, Aleix Garrido, Antonio Caravaca, Ilias Akhomach or Ángel Alarcón, Gavi may be the best of them all.

Moreover, at international level Pablo has already debuted with Spain’s U–16, alongside several other teammates from Barcelona. With him turning 16 this year, he will have many big European clubs on his back looking for him to sign his first professional contract with them. It is indispensable that Patrick Kluivert seals his renewal as soon as possible to avoid what could be a catastrophic departure. Thankfully, the work for his renewal seems to be underway already.

A magician is defined as someone that spreads magic, that invents, that produces the unexpected or unimaginable. According to the Cambridge Dictionary, it can be a person who performs tricks for entertainment. We used the term wizard to describe Brian Peña already, but Brian has more aggressive and sharper moves as he seems to have the Brazilian flair in his veins in spite of being Spanish. By contrast, Gavi pulls rabbits out of his hat too, yet he does it in a different way. He has more lightness, more softness, even more elegance. He glides past defenders smoothly, easily. His tricks are not only for entertainment, though, but to produce something. Pablo Páez is very thorough and wants, above everything, to help his team for a common goal.

He could be a classic number 10, but Gavi has become tailormade for the middle line | Photo by FC Barcelona

Gavi could simply be described by the number he wears in his back: 10. He fits that role like a glove as he has enormous technical quality and creativity that gets exhibited when he carries the ball glued to his feet. To any feet, actually, as the 15-year-old is ambidextrous. A huge advantage that makes him even more unpredictable and indispensable, as opponents never know which direction will he head to. This offers him and the manager more tactical flexibility too. While he has a singular and exceptional feet, football is in his head. He doesn’t care if he usually is one of, if not the, smallest player on the pitch, as he always has his head raised up and is continuously scanning his surroundings and options ahead of him.

Even if he could perfectly be a traditional number 10, Gavi has also been changing his game and has become even more complete over the years. His future seems to clearly lie in the interior or central midfield position, the spot he has mostly occupied in 11-a-side football. He can be a mediapunta, winger or secondary striker, but his evolution has led to him being closer to the base of the midfield. Now, he not only playmakes and scores, but he is very involved in the build-up and is never afraid of asking for the ball in his own half. Pablo has an immense personality and has a strong character too, being motivated and ready to carry the team on his back whenever needed.

Occupying a deeper position in a 4–3–3 doesn’t seem to have affected his goalscoring figures much either. At the time of writing, he has 9 goals this term, being the second top goalscorer of the Cadete A after Ángel Alarcón, with 15. Gavi has the capacity, intellect and gift to influence the play in any zone of the pitch, at any moment. He is clever and quick thinking, with a phenomenal reading of the game and decision making. He understands which space he has to occupy and which choice he has to make.

In some ways, he could be related to Riqui Puig. Riqui used to be a false 9 in his beginnings but, while being very tiny, he matured into an all-round interior. Gavi is similar, in terms of having a small stature, a pinpoint passing accuracy – mostly through passes – and control of the ball that is very pleasing to the eye. Pablo, like Riqui, oozes class, luxury and delicacy, but productivity as well. In defence, he’s very active and attentive. Having such a wide set of skills while also being such a specialist in the creative aspect is what could make a difference between him and all the other footballers.

What does the future hold for Gavi?

Pablo Páez Gavi really seems one of the chosen ones. While he floats across any part of the field with great beauty, he wreaks havoc when he’s at the edge of the box too. With an innate quality, he has the mentality of a leader as well. It may be too early to tell this, but it looks crystal clear that Gavi was born to do big things in this game called football. As he transitions to a number 8 role, Pablo may be another delicious midfield maestro in the making.

Episode 20: Gerard Fernández, Peque
What did you think of this article?