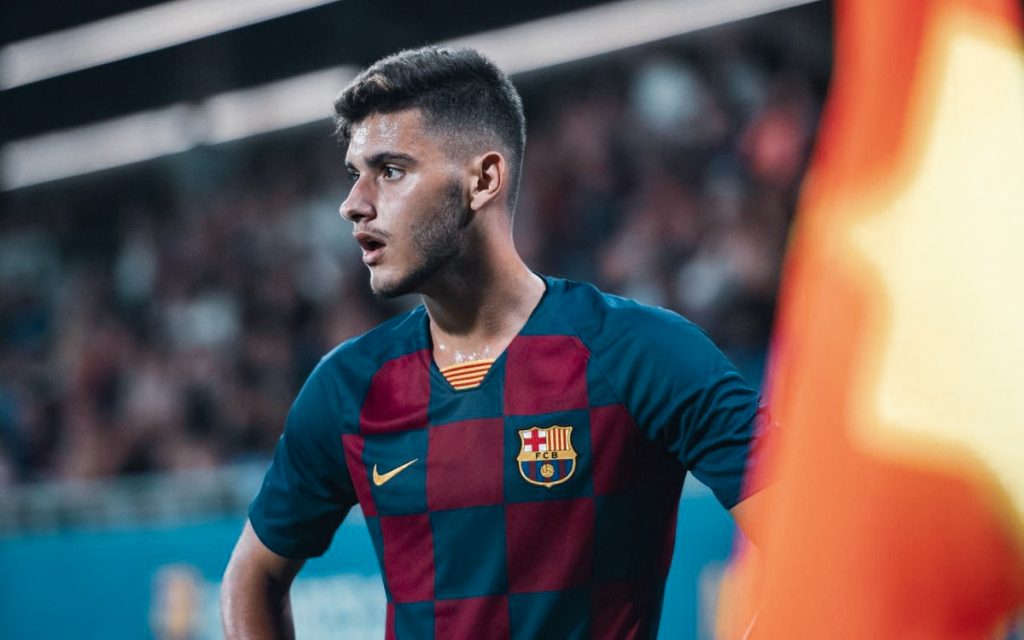 Versatile creator Nils Mortimer is ready for the next step at La Masía, as he is expected to be promoted to Barça B in the summer. We analyse his trajectory so far, his playing style, and his possible potential.

The season of the Juvenil A is already over, as the Royal Spanish Football Federation decided to put an end to it due to the current health situation. Franc Artiga’s Juvenil A were crowned champions of their respective league, yet for many of its squad players, this does not mean that their campaign is over. Several will feature in Barça B’s play-offs for promotion to the Segunda. García Pimienta will be able to call up 20 footballers and make 5 substitutions per game. One of the youngsters Pimi could use is the silent left-footed talent Nils Mortimer, who is now ready for the step up to the B squad.

Nils Mortimer was born in Málaga, the Andalusian port city in southern Spain, on 11 June 2001. He began fantasising about his career in football when at the age of only 4 he joined UD La Mosca, in his native Málaga. Unafraid, Nils did not hide away when he had to compete with players older than him. Soon Sevilla FC showed interest to sign him, but the 200 kilometres that separated it from Málaga led to him choosing to stay in his city. He returned to UD La Mosca and, only a year later, Málaga CF set their sights on the young boy. While he was just an Alevín, he was promoted to a higher category, the Infantil A.

Once at Málaga, he captured the attention of Barcelona. So, ahead of the 2013/14, Mortimer joined La Masía. He was added to Marcel Sans’ tremendously promising Infantil B. Certainly attacking talent was not missing in that team, since it already contained Ansu Fati, Take Kubo and Konrad de la Fuente. Nils was overshadowed by the media as all attention was grabbed by Ansu and Kubo, but still, the Andalusian already started showing signs of his magic as his adaptation was seamless. In his first campaign with the Infantil B he became their top goalscorer, scoring a total of 18 goals. Either on the flank or as the lone centre-forward, Mortimer was one of his generation’s top goalscorers in every single season.

Currently, like last term, Nils is part of the Juvenil A. This is his seventh season at La Masía, and his progression has been more than satisfactory. In March 2019 García Pimienta handed him his debut with Barça B away at Ebro. In the present course he has registered six more appearances with the B, while he has continued to shine regularly in the Juvenil A. This season, per @ViscaBarca1233, he has recorded 9 goals and 13 assists in 1711 minutes across 25 matches. Impressive figures for a guy who, according to Gerard Romero, will get promoted permanently to Barça B in the summer.

Nils Mortimer is a silent left-footed magician. The talent in his left foot complements with the humility and work ethic of a teenager that has become key for every team he has played for, regardless of the high amount of attacking quality his generation already has. While he is neither a natural striker nor a traditional winger, his versatility allows him to occupy any position in the front three, including the false 9 or even interior at times. Generally, he is an imaginative winger, standing out for his superb playmaking virtues. He is one of, if not the most creative player from the Juvenil A.

Possibly in the future he may lack a bit of pace and acceleration to be a winger, but he makes it up with his excellent technique. He is not as incisive and vertical as the likes of Konrad or Jaume Jardí, yet he does possess a privileged vision. With his silky touches and inventiveness, he can pull line-breaking passes and assists with ease.

He is elegant at carrying the ball. In particular, he likes to start from wide and make diagonal runs with the ball towards more central zones. He has a great control and beats defenders through pure talent, rather than for his physical conditions. He’s a good finisher too, and in defence he is generous and selfless.

However, Nils is not perfect, of course. He does have several aspects he needs to improve, probably more than most of the academy’s top talents. For instance, in spite of his undisputed quality, he has to find more regularity in order to become more differential. His quality suggests that he should be more influential in his team’s play, rather than having sporadic moments of brilliance. If he becomes more consistent in his contributions and impact in his side, his left foot will certainly live up to it.

With his head raised, Nils is constantly looking to deliver an assist

Furthermore, he must make sure that his versatility is a strength rather than a weakness. Sometimes Mortimer can become too undefined as a footballer. This has cost him a bit in the past two campaigns, mostly in the 18/19. With Denis Silva he was not mobile enough to act as a false 9, and on the wing he was not as explosive and vertical as someone like Konrad. A transition to an advanced midfield role would not be a bad idea, but he would still need to adapt there. Right now he seems significantly more suited to operating as a winger.

What does the future hold for Nils Mortimer?

There are some moves from Nils Mortimer that are somewhat reminiscent of Carles Pérez. He has a low centre of gravity, loves to keep the ball glued to his left foot, and dribbles with feints and swift touches to the ball. Nonetheless, unlike Carles, Nils is not too powerful nor does he have the incisiveness or physical conditions of a natural winger. With that being said, Mortimer does have the talent, vision and playmaking qualities to make a big impact in the final third. Next season he will be promoted to Barça B, meaning it could be a defining year for him. García Pimienta is an expert at shaping such type of prospects, as he did with Carles Pérez and has been doing with Kike Saverio. Not to mention Collado. Next term could be a critical one for Nils Mortimer, as he searches for the turning point to become the decisive footballer his gift deserves to turn him into.