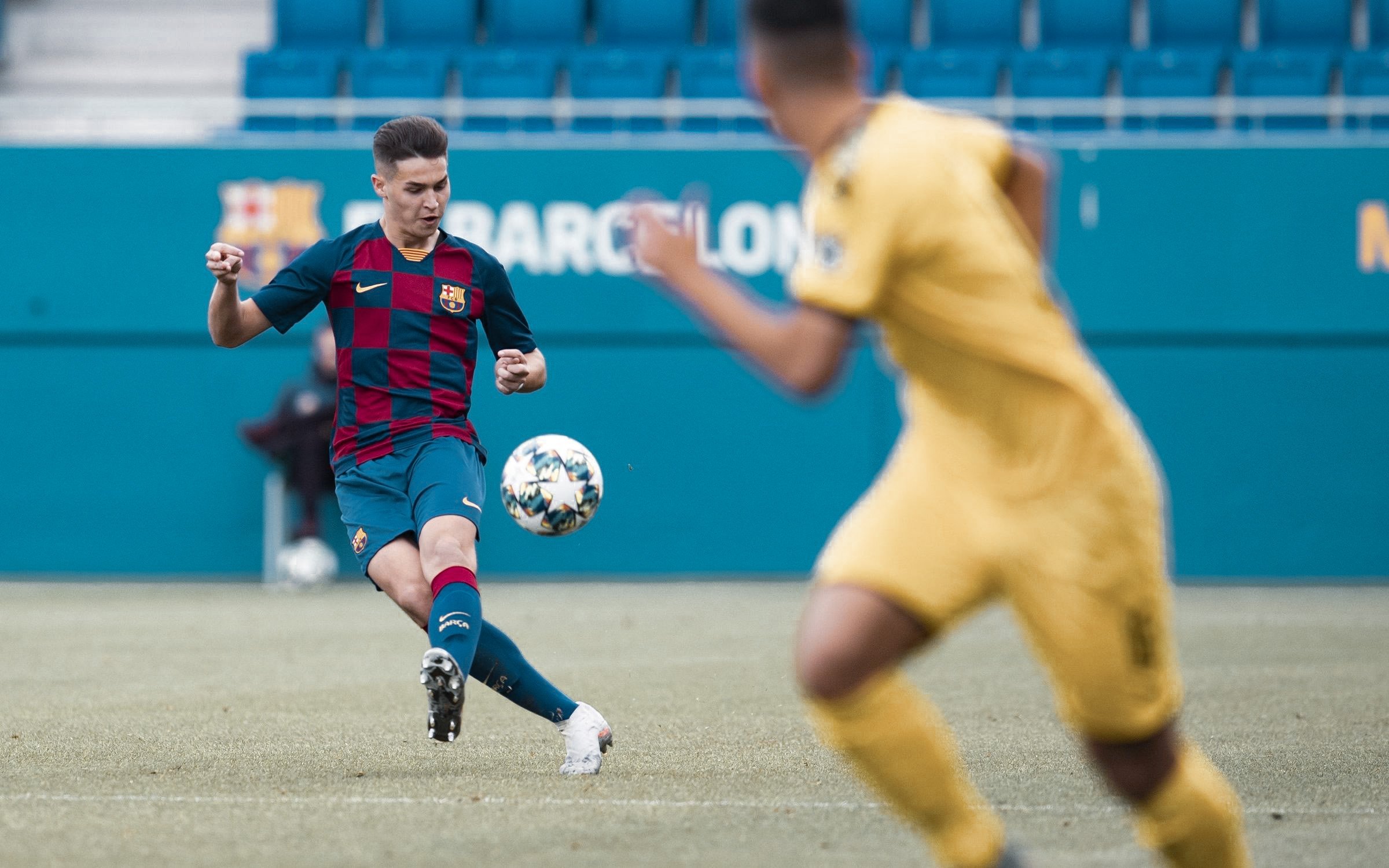 An in-depth analysis of La Masía versatile defender Mika Mármol. A look at his profile, style of play and what to expect from him for the long-term.

One of the most valuable and overlooked elements any elite and competitive squad must have is versatility. While having two players per position guarantees that there always is an alternative in case the natural starter is injured or unavailable, it is adaptability what allows the manager to modify his tactics safely even with the absence of the regular stars. In defence, this is crucial too.

The current senior squad, though, unlike in the past, doesn’t have many footballers that can occupy over two roles at the back. Sergi Roberto can be a midfielder and right-back, while Nélson Semedo can occupy both flanks. Nonetheless, no unnatural centre-back can be a centre-back like Yaya Touré, Javier Mascherano or Éric Abidal in the past. If Carles Puyol or Gerard Piqué were missing, they would come in at the heart of the defence and be a very reliable solution – to the extent that Masche, signed as Sergio Busquets’ substitute, ended up becoming a centre-back almost permanently.

While Barcelona lacks such a profile at present, in the academy there is a footballer that has been a jack of all trades for his respective coaches and that has been progressing at a steady pace even if he doesn’t get the same attention as some of his teammates. That’s none other than La Masía talent Mika Mármol, who, like Abidal back in the day, can act both as a left-back and centre-back. A blessing for any manager.

Contrary to the information given by FC Barcelona’s website, where he appears to have born in 2002, Mika Mármol was born on 1 July 2001 in Terrassa, a city roughly 24 kilometres away from Barcelona. It was aged 3 when he took his first steps in the footballing world, playing at Camping Creixell or also in the schoolyard or in front of his house. When he was 4 years old, he already moved to his hometown club, Terrassa.

Nevertheless, he only lasted one season there before moving to Barça’s Escola, where he was part of the first Prebenjamín ever in the academy. After one year at the Prebenjamín and two with the Benjamines, when he had to make the leap to the Alevín when he suffered his first setback, as Barcelona told him he was not good enough for that category. A hard blow for the kid, but something a large amount of youngsters encounter every year. A difficult moment for the boy and his family, who understood that leaving Barça is not the end of the world. His career did not step there.

After leaving Barça, he moved to Jàbac i Terrassa, where he played with boys one year older than him. Following a sensational campaign with them, he signed for the prestigious CF Damm, where spent most of his years during his stage of development. In his first year as a Cadete, however, he decided to return to Jàbac, where he played his best football and completed a spectacular season that allowed him to draw Barça’s attention again. In the summer of 2018, Barcelona were searching for a left-back from Catalonia after Joel López left to Arsenal. They found no one better than Mika Mármol, who sealed his return to La Masía by signing a two-year contract and joining the Juvenil B.

“I’m very happy with the debut and, on top of that, I have debuted here with a win. I still cannot believe it. I’m very happy

When the coach called me, I was nervous, but then, when I came on, I forgot about everything. I have felt very good and I have received the support of teammates, manager and coaching staff”

Mika Mármol, after his debut with Barça B

Under Franc Artiga, Mika, by then a 17-year-old, became an undisputed starter in the left-back role. Due to his excellent performances, and also with the injuries of some of his teammates, he started playing with the Juvenil A in mid season, where he played the Youth League and where he has remained since. Still, on 12 October 2019, by replacing Òscar Mingueza in the 81st minute in a 3–0 home win against Orihuela, Mika made his official debut with Barça B, becoming the seventh man to do so under García Pimienta. Another achievement for Mika Mármol, who had to leave La Masía as a kid but returned stronger than ever.

Mika Mármol could well be described as any manager’s dream player, at least for one at La Masía. Despite not making much noise, Mika is evolving with every passing game and is showcasing a rare maturity and tactical soundness for someone of his age. As a natural left-back, he continuously contributes to attack with his forward runs and, mostly, his pinpoint crosses. When he is in a static position, he’s able to raise his head, pick his target and deliver an exquisite cross with his delicate left foot. That precisely is one of his main strengths: he doesn’t need to be in motion to create danger, which he combines with a great creative output.

Notwithstanding, while apparently he may not have the flair of other full-backs, not even the gift of most of his teammates, his biggest attribute is his positioning and reading of both offensive and defensive actions. His brain and positional intelligence is well above the average. His decision making is truly admirable, and this tends to be the difference maker for footballers. With his serenity and composure, he is a smooth carrier of the ball – which has allowed him to occupy the centre-back spot regularly – and has a great capacity to play between the lines or in interior zones.

“I really like Jordi Alba and also Clément Lenglet”

Mika Mármol, on his references

Defensively, even if he is neither robust nor strong, he is very astute and disciplined, basing his game around anticipation and, again, positioning. In spite of being a natural left-back, at no time has he looked out of position, and he has actually been one of the best performing defenders when acting as a centre-back given the lack of promising options in such positions.

What does the future hold for Mika Mármol?

As mentioned previously, Mika Mármol may not have the talent of some of his colleagues, but, since his return at La Masía, he has always proved that this is no handicap for him as he is able to compensate it with his commendable cognitive abilities. While he is not renowned for his physique, nor for his technique, intelligence is an indispensable trait for any youngster that dreams of succeeding at the Camp Nou. Juvenil A’s versatile defender Mika Mármol certainly possesses this in abundance.

Episode 15: Pau Cubarsi
What did you think of this article?