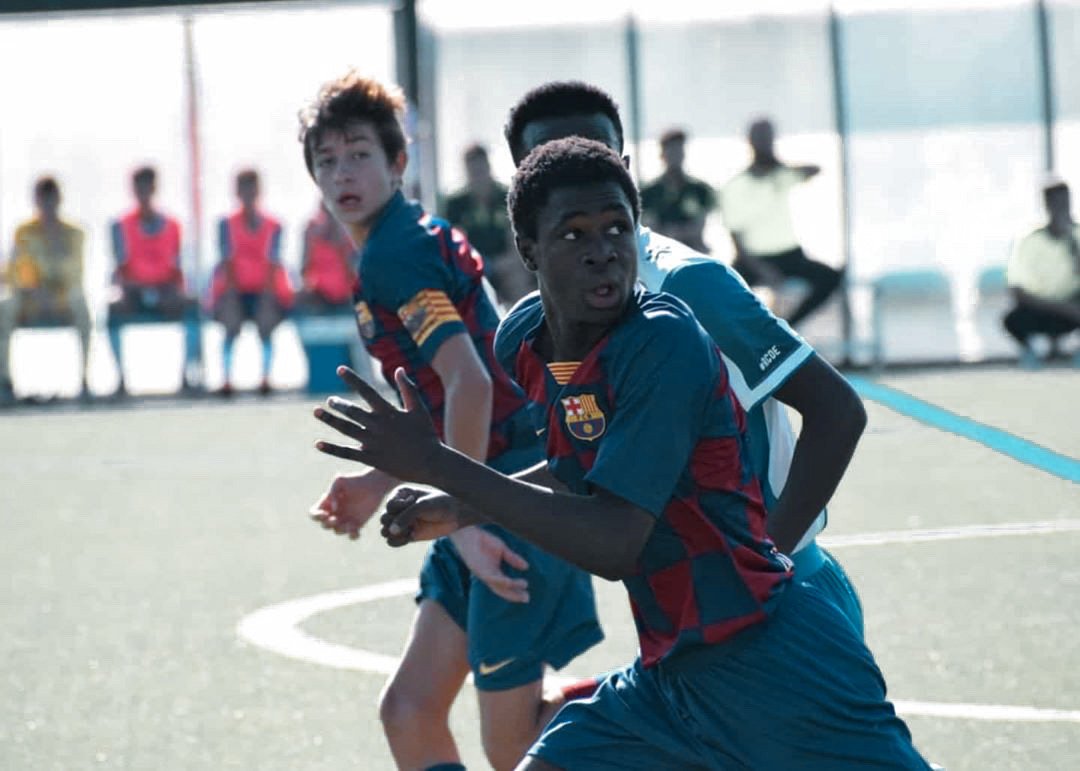 A full look at 12-year-old defender Landry Farré of La Masía. A review of his profile and analysis of his playing style and what to expect from him in the long-term.

Judging a footballer by his physique when he’s still in the early stages of development can obviously be very misleading. The body of oneself and of teammates and rivals changes a lot from childhood to adulthood, and the superiority of one player when he’s 12 may be lost once the opponents grow up and make up for lost ground.

It must be said that the protagonist of this week’s La Masía Talents episode is a boy one of the main strengths of which is his tall frame and physical configuration. That’s why we should be very careful when analysing him. Nevertheless, physique by no means is his only positive asset – in fact, it may just be a complement to his wide set of skills and attributes. We’re talking about Infantil A’s Landry Farré.

Landry Cephas Farré Miró was born in the Ivory Coast, on 1 January 2007, though was adopted in Spain, which explains his Catalan surname and accent. He began to play at P.B. Collblanc-Sants A.E., a Peña Barcelonista or Barcelona supporters group. In 2015, Landry joined La Masía, though, due to the FIFA ban that affected not only the first team – in particular, Arda Turan and Aleix Vidal – but also the entire academy, he had to wait until January 2016 to make his debut with the blaugranas. The by-then 9-year-old was part of the Benjamín D and actually scored in his first appearance for the culés. Landry Farré was one of the 76 La Masía new signings affected by the ban, but had a happy return to action.

Since then, his progression has been much faster and smoother than what anyone would have imagined. Last season Farré played mostly with the Infantil B, though he went back to the Alevín A to play the prestigious tournaments of the Danone Cup and La Liga Promises, where they finished as champions and runners-up, respectively. Landry, alongside Lamine Yamal, was one of the top performers and stars of that golden generation that did impressively well under Marc Serra in both competitions. Despite being a year younger than his colleagues, Landry now plays for David Sánchez’s Infantil A.

7-a-side football always obliges all players to have multiple tasks both in defence and offence, which helps develop and expand the potential of all youngsters. Landry Farré is a natural centre-back, despite the fact that in F7, with 3–2–1 or 3–1–2 as the usual formations and with constant interchanges of positions and flexibility, he would play as a winger or full-back on any of both sides. With his pace and technique, he never had any problems in playing wide, yet in 11-a-side he now acts as one of the two centre-backs.

Fast, intelligent and very focused and alert whenever he has to man-mark a striker. He wins most individual duels as he knows how to use his strength to his advantage, and, with quick reaction time, he hardly ever is surprised by his opponents. Imposing and with a great acceleration to turn around and run backwards whenever needed. However, when defending positionally, he’s unbeatable too, both by land and by air.

Moreover, Landry is two-footed and likes to push forward and score some goals too thanks to his instinct and power. He’s capable of finding the net from any distance and either with his head or any of both feet. If there’s something that needs to be pointed out as his weakness, that’s his impulsiveness or lack of awareness in certain occasions, which got exposed mostly when he was deployed as an attacker. He would sometimes attempt individual actions or dribbles, or to break through the opposing defence, when there was a better passing option available. Even so, as a centre-back he feels much more comfortable and his main weak points get covered.

What does the future hold for Landry Farré?

In spite of being a year younger than everyone else, Landry Farré already dominates his age group and makes everything look incredibly easy. As mentioned previously, we must be cautious when assessing a talent that is so commanding through his physique, but it’s also true that his technique and positioning are outstanding too. We should be careful, of course, but as much as with every other young prospect that we have at Barça’s academy. Alongside Cadete A’s Diego Almeida, he comfortably is the centre-back with the highest ceiling at La Masía. Only 12, but his quality cannot be overlooked.