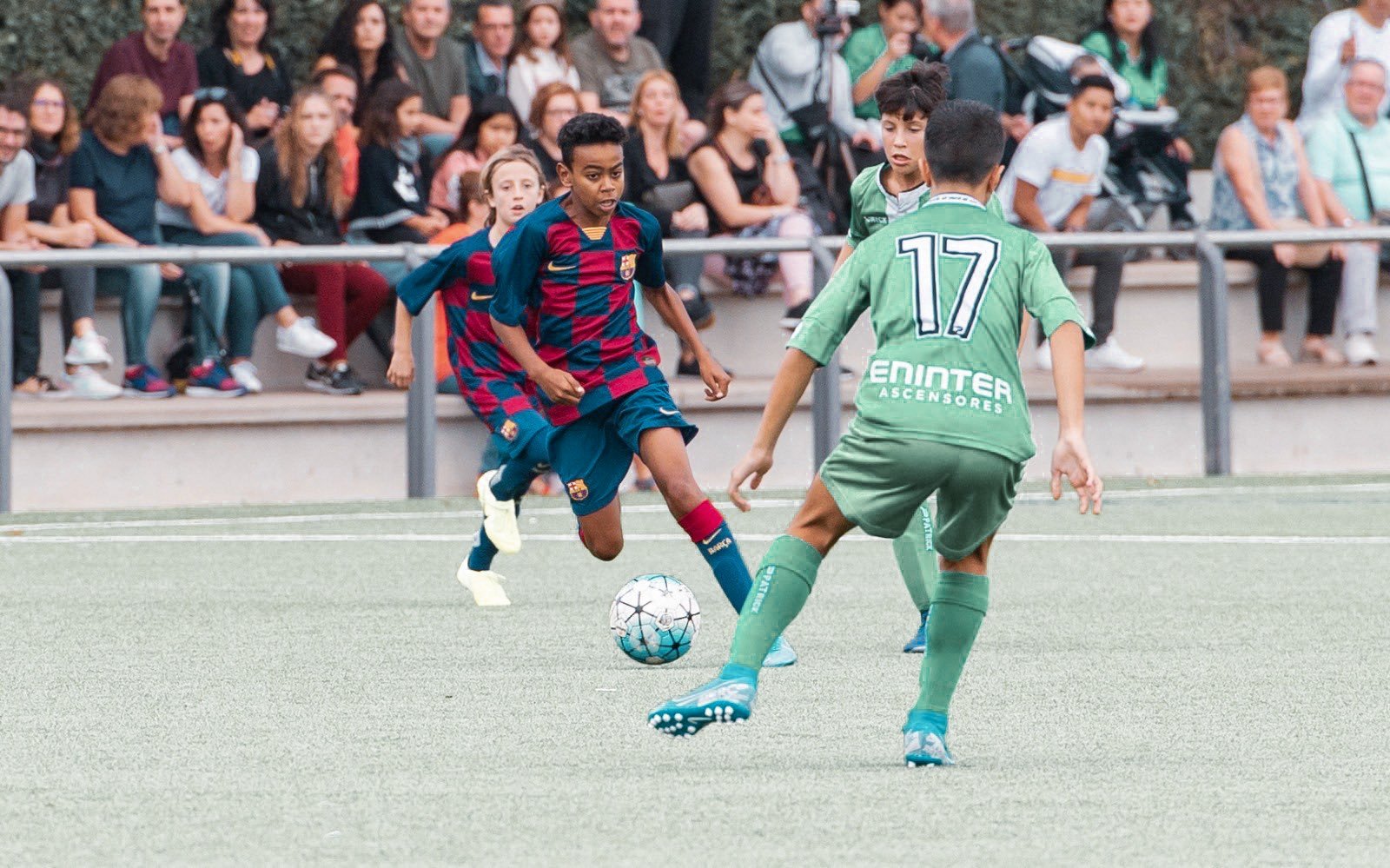 Lamine Yamal is one of the hottest prospects at La Masía, albeit just 12 years old, and in this article we analyse his trajectory, playing style and ceiling.

La Masía is a factory of talent, but also of knowledge. All ranks at Barcelona, from the first team to the under-8s, follow a very distinctive pattern and playing style. All graduates are guided through the same path that helps them acquire all required concepts to execute an idea and brand of football that emerges above any individual.

Every single player is moulded into the demands of such a special institution and school of thought, but the most interesting part is that these youngsters follow this very specific process without having their wings clipped, without their talent being denaturalised. Many people expect all products to be the same – every centre-back to be like Gerard Piqué and every midfielder like Xavi Hernández or Andrés Iniesta –, yet you won’t find two players alike.

While being taught in the Barça way, every individual will add its respective amount of creativity, quality, imagination, and genius. That’s the art of La Masía: creating diversity inside an immovable style. This sense of unconventionality is represented in a rough diamond that captivates through his uniqueness and originality: Lamine Yamal.

This episode’s protagonist is a boy, not even a teenager, that was recruited by Barcelona at a very young age due to his precocious talent. Lamine Yamal Nasraqui Ebana, of Moroccan origin, was born on 13 July 2007 in Mataró, a town 30 kilometres north-east of Barcelona, though he now lives in Granollers, another city at a similar distance from the Catalan capital. Barça spotted him when he was only four and a half years old and played in a team in a neighbourhood on the outskirts of the big city. Thus. they soon brought Lamine Yamal to La Masía when he was five to join the Prebenjamín, the first side in the Barcelona academy.

Since, Lamine Yamal has been learning all about the Barcelona method, at the same that time his technique, his greatest attribute, has kept flourishing no matter the age of his rivals. As an attacker, he usually is among the top goalscorers in whichever tournament he takes part in.

Recently, in June this year, Yamal, with 7 goals, ended as the joint-top scorer of the prestigious La Liga Promises, an annual competition for 12-year-olds in 7-a-side football which Barça narrowly lost in the final against Madrid (1–0) despite remarkable exhibitions throughout the entire event. Lamine would have also been named the MVP had it not been for the fact that the club decided that none of their players would collect any individual award as they wanted to prioritise the collective and team spirit over the figures and egos.

Marc Serra was their coach in that edition of La Liga Promises and, as one of the most experienced managers at the academy, he acted as an adviser, trainer, father and educator for many of these kids that are making their first steps in this complex world of football. Serra took charge of the Cadete B (U15) this summer, while Lamine currently plays for the Infantil B (U13). In fact, he scored a hat-trick in his official debut in an F11 game with the Infantil B, just a few days ago.

Lamine Yamal is a left-footed attacker, mostly a centre-forward in 7-a-side football but that could evolve into a right-wing role in 11-a-side. One of those talents you never get tired of watching, with a delicious and extremely polished left foot that allows him to smoothly and swiftly drive past players and to display what arguably is his best attribute: finishing. In one-on-one situations with the goalkeeper or from long-range, Lamine is an expert at finding the right angle and combining precision with power to beat the man in goal. Quality and instinct. Finding the net regularly is in his veins.

“I keep repeating myself: Lamine Yamal is the best player that has played in 7-a-side football for Barça in years. He has it all”

Without a doubt, he’s one of the most technical and gifted players in the entire academy, with dribbling skills, close controls and rapid movements that make him a nightmare to defend against for any defender. Lamine is ambitious and, while not individualistic, very attack-minded. He’s determined and, whenever he gets or asks for the ball, he aims for goal, with a forward or diagonal run, a vertical pass or a strike from any distance. His body language is enough to determine how unique he is.

Lamine Yamal, with the number 9, is a born goalscorer | Photo by FC Barcelona

The best or most encouraging thing is that Lamine doesn’t stand out for his physique. Judging these boys, who still are at a stage of growth, by their physique can be extremely deceptive, as one who feels superior to others in terms of strength or speed may see all his features weakened once he has to face adults. With Yamal it’s different. He doesn’t attract attention for his physical conditions, as sometimes you can even see him catching a breath after one of his trademarks runs, but for his natural gift. He’s all talent.

What does the future hold for Lamine Yamal?

Predicting what will happen with a kid aged just 12 is an impossible, absurd and pointless task. Every year, footballers considered hot prospects at a young age have to abandon this sport and don’t even become professional athletes. Nevertheless, as mentioned previously, if we can be optimistic about Lamine for one thing, that’s for how dominant he is despite his apparent physical vulnerability. When he’ll have to start competing with older boys, he shouldn’t have any problems in adapting to the competition. If nothing goes wrong for him and he suffers no fatal setback, and also has the bit of luck required to arrive at the elite, he could certainly have a bright future ahead.

Watching emerging talents develop and progress until reaching a well-earned success in the first team is one of the most gratifying rewards of La Masía, and at present, Lamine Yamal embodies the essence of the term ‘a joy to watch’.

Episode 1: Ansu Fati
What did you think of this article?