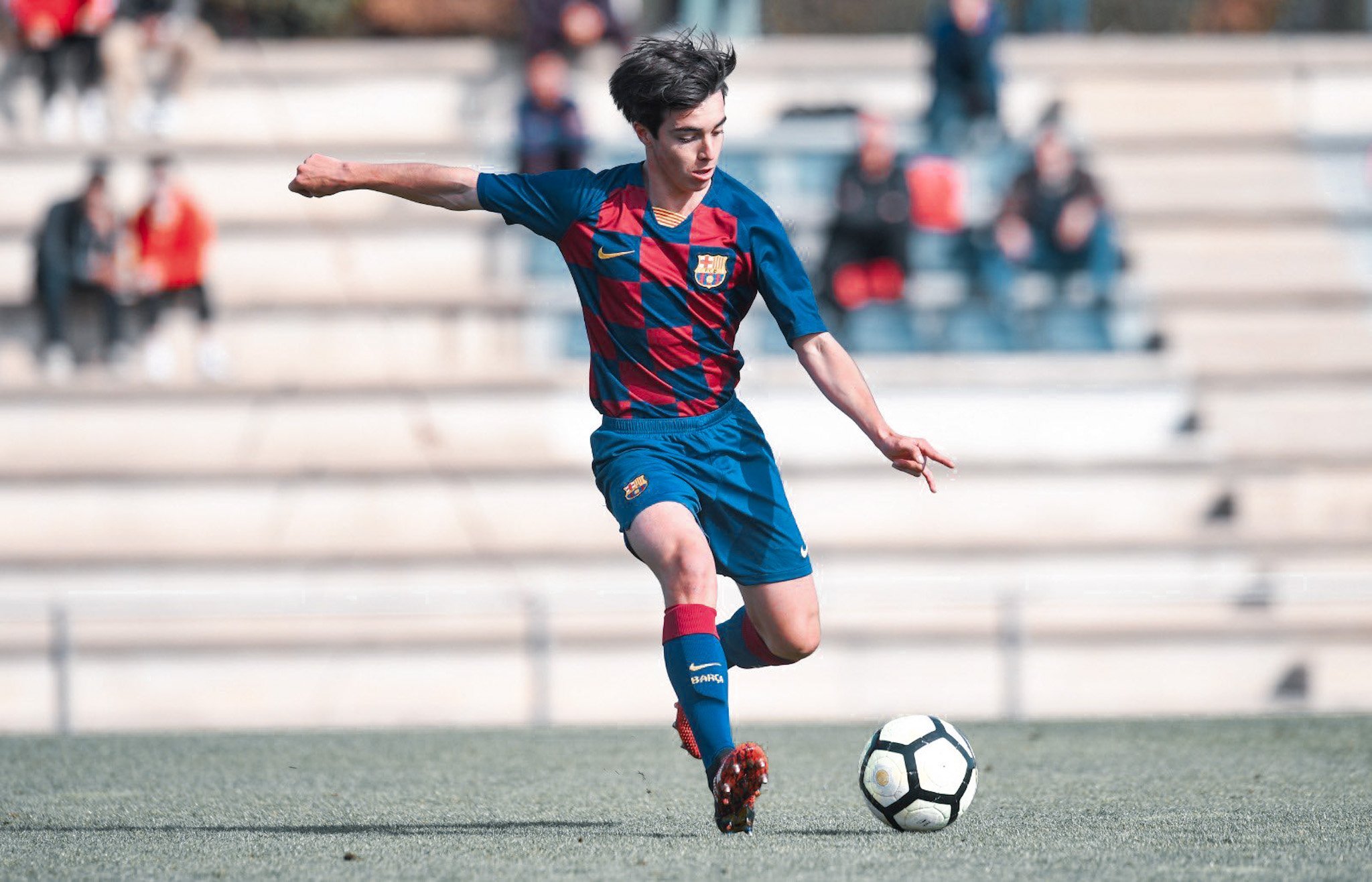 After having finally completed his recovery from a serious injury, we analyse the profile, style of play and potential of La Masía promising midfielder Jorge Alastuey.

La Masía can’t stop producing excellent midfielders, with each of them being different and with its own personal touch of originality. While comparisons are often drawn between rising stars and established legends, no two players are alike. Even if, having all developed at the same academy, they do share some attributes regarding tactical awareness, intelligence, technical ability and more, the slight differences between each other make them all distinct. Midfield talent Jorge Alastuey, despite possessing all the conditions required to succeed at Barcelona, still is a unique prospect.

Born on 14 May 2003 in Cuarte de Huerva, Zaragoza, Jorge Alastuey began playing football at AD Stadium Casablanca at only 3 years of age. With his silky touches with his left foot, the kid captivated the attention of all those watching him. Including Real Zaragoza, the city’s big and historical club. He joined them after 7 years at Stadium Casablanca, and with Zaragoza he further demonstrated all the quality he had in his boots. Spanish giants Barcelona and Madrid started monitoring him, but it wasn’t until a tournament in Argentona as an Infantil that the blaugranas decided to make an offer for him. Jorge, who was a culé since he was a child, did not hesitate to accept Barça’s proposal. So, aged 13, he was added to La Masía’s Infantil A.

But then, what should have been the youngster’s best and happiest summer transformed into the worst of them all. He and his brother Nacho lost their mother to a complicated illness, and those were tough moments for the young Jorge. Separated from his family as he moved to La Masía in the Catalan capital, and with the death of his mother, the Jorge Alastuey had to show an immense maturity and strength to keep moving forward. With an admirable personality, the then-13-year-old incredibly managed to overcome that difficult situation.

Jorge, renewing his contract with Barcelona in the summer of 2019 | Photo by FC Barcelona

Since he arrived to the academy, his rise has been meteoric. While being somewhat shy, he soon became one of the captains of the Cadete B after a year at Barcelona. Then, last campaign, he was named the captain of the Cadete A. His values, leadership and modesty make him an exemplary teammate. Sadly, he suffered a season-ending anterior cruciate ligament tear during the 18/19 term, which ruled him out for the remainder of that course and the first half of the 19/20. During that period, though, he turned 16 and was ready to sign his first professional contract. So Barcelona, in spite of being injured, renewed his contract for three more seasons in the summer of 2019 and promoted him to the Juvenil B.

After a long recovery process, Jorge finally made his return on 9 February 2020. A truly deserved reward after yet another setback for him. But adversity will never bring Alastuey down, but rather make him stronger. Furthermore, apart from his positive attitude, what makes him a safer bet for his future as a footballer is that he is a very humble and level-headed guy. His academic record is excellent too, making him a commendable person and player.

A member of an excellent 2003 generation that includes superb midfielders like Txus Alba, Marc Doménech, Marc Casadó or Arnau Solà, even with the exit of Xavi Simons in 2019, Jorge Alastuey stands out as one of, if not the, brightest of them all. His delicious left-foot is like a painter’s brush, which he uses to delicately colour the game with his artistry. His technical ability is magnificent, with a very elegant touch and control to handle and carry the ball with class and magnificence.

Jorge, while a natural attacking midfielder, will most likely slowly evolve into an interior or number 8, with his capacity to dictate play and, above everything, his intelligence. Creative and agile – physically and mostly mentally –, he has a splendid decision making and talent to dominate from midfield. With his peripheral vision and passing range, he can deliver a line-breaking assist with ease.

Jorge Alastuey has a golden left foot to pass, carry the ball and create | Photo by FC Barcelona

By contrast, scoring goals is by no means his main virtue. While he can unleash accurate strikes from long range or make arrivals into the box, he is more suited to playmaking and distributing than getting on the scoresheet. Vision, creativity, imagination, positional awareness and intelligence define an exceptional talent and leader on and off the pitch.

What does the future hold for Jorge Alastuey?

Jorge Alastuey undoubtedly is one of the most promising midfielders at La Masía. And that’s no small thing considering the endless list of gems in that position. But he deserves one of the top spots, as he certainly has the technical, tactical and cognitive abilities, and, perhaps even more importantly, the humility, work ethic and attitude to reach the elite. Maybe he needs the luck in terms of physique and fitness which he has not enjoyed in recent months, and to make the full transition into an interior. Yet the 16-year-old is expected to successfully adapt to any spot due to his intellectual capacity.

If he gets promoted to the Juvenil A, which 2004-born Pablo Páez Gavi is expected to do, then they could form a mouth-watering combination as two of the most exciting midfield maestros in the academy at present. While in the past years he has seen how other top prospects have left the club, Jorge has rejected offers from England and France as he has a strong desire to make history at the Camp Nou. Despite the many stumbling blocks in his path, Alastuey certainly is on the right track.