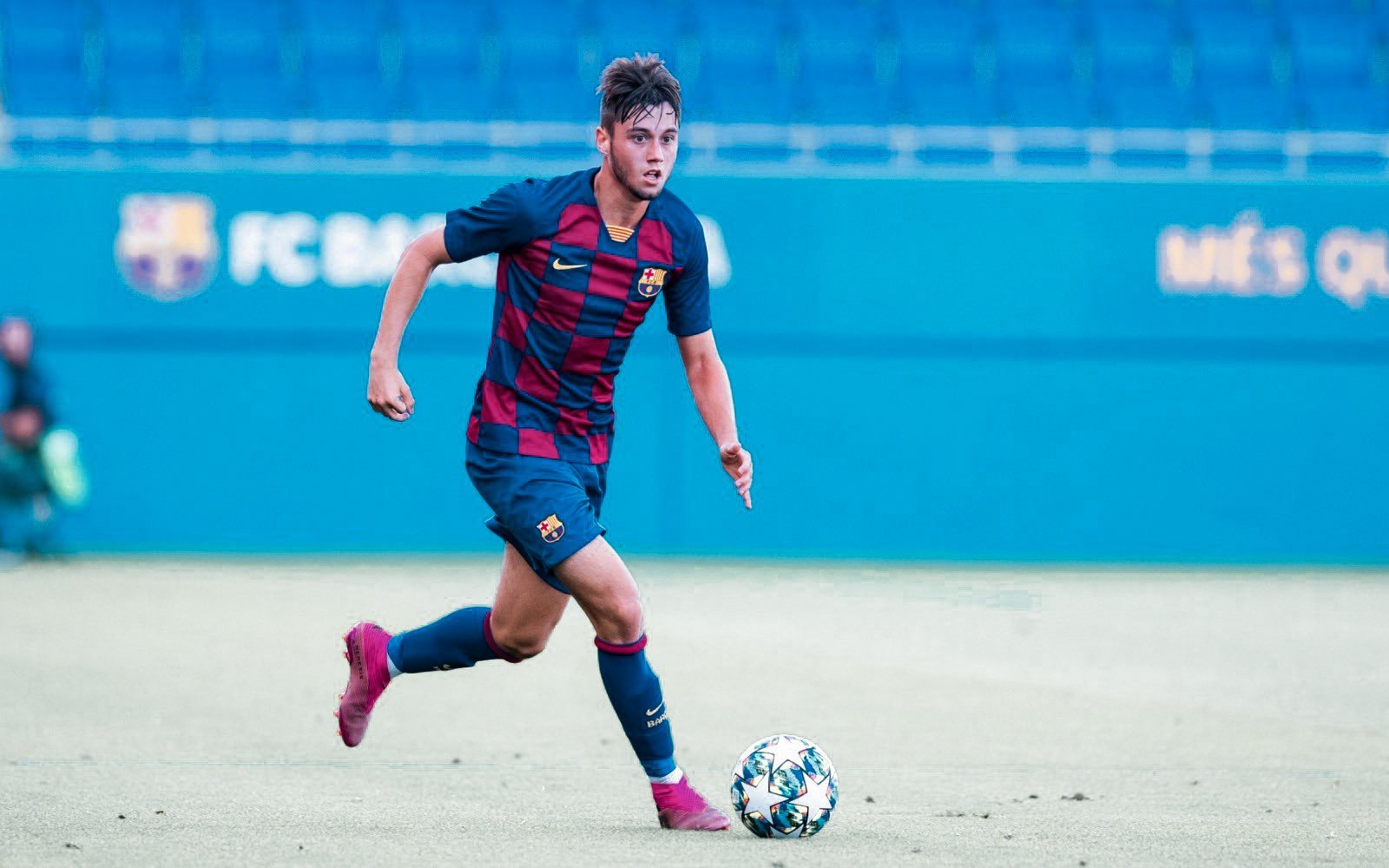 An in-depth analysis of La Masía Juvenil A’s winger Jaume Jardi. A review of his profile, playing style and expectations for the future.

Wingers at Barcelona are some very special figures that require some very unique attributes. Not only do they need to be productive and dangerous on the ball; they have to be smart and efficient out of it too. Wingers are often seen as luxurious individualities, but at Barça it is imperative that they mostly work for the collective. That being said, no attacker that emerges from La Masía is the same, yet we could almost classify them into two groups.

The first one belongs to the players that, while they are wise off the ball, are most renowned for their talent and what they do on the ball: this could be the case of Ansu Fati, or Konrad de la Fuente and Ilias Akhomach from the academy. In the second category, we find the wingers that, even if they are very gifted, are extraordinary mainly thanks to how they move off the ball. We could add Pedro Rodríguez and Carles Pérez to this list.

Nonetheless, there obviously are exceptions, and these two divisions are very flexible. Still, for one particular winger at La Masía, it’s difficult to state whether he stands out more for what he does on the ball or for what he does out of it. And that’s none other than Juvenil A rising La Masia star Jaume Jardi.

Born in the Catalan city of Reus on 7 April 2002, Jaume Jardí began to play football at the age of 5 at the local club Escola de Futbol La Pastoreta. In a match against CE Santes Creus, La Pastoreta lost by 7–6, but Jardí scored all 6 of his side’s goals. He had goals in his veins. Later, in the 11/12 season, he actually moved to Santes Creus, and a year later he signed for his home town’s biggest team CF Reus Deportiu. Moreover, every Monday since he was 6, he would attend a Technification Centre at Tarragona that was linked to the FCB Escola. Probably, for having been training with Barcelona’s methods since he was a child, once he moved to La Masía his adaptation was surprisingly smooth. Still, in his second year as an Alevín, he stopped attending the technical school to focus exclusively on Reus.

It was in Reus’ Infantil (U14) where he started to stand out and attract interest from various bigger clubs in Spain. One of them was Valencia, who invited him to take part in a tournament at Zaragoza. His performance in that competition was spectacular, despite he broke his finger in the final. Then it was Espanyol and Real Madrid who became interested in him. Madrid were so convinced of the need to sign Reus’ highly-rated talent that they didn’t even want to test him, but directly invited Jaume’s parents to the capital to show them the facilities of Valdebebas and explain them what their plans were with the boy.

But Jardí’s parents wanted their son to make the decision, and Jaume, a culé since he was a little kid, did not hesitate: he wanted to play for Barça. His wish was fulfilled. In 2016 he signed for the blaugranas‘ Cadete B (U16), and there he surprised everyone with his magic displays, which arrived earlier than what anyone would have expected. Now, 17, Jaume is part of Franc Artiga’s Juvenil A.

Jaume Jardí is a left-footed forward that can play anywhere in the attack, though in recent times he has been acting as the right-winger to exploit his ability to cut inside and unleash one of his tremendous shots. At Reus, nevertheless, he was a sort of mediapunta or attacking midfielder, scoring 14 goals in one campaign. There, even if he occupied a deeper position, he already demonstrated that he had an unerring eye for goal. This season he has kept progressing in leaps and bounds and, first with Valdés and later with Franc Artiga, he has always been one of the most reliable figures in the team. At the moment of writing, he has scored in each of the Juvenil’s last 6 games.

As mentioned previously, Pedro and Carles Pérez both share an unselfish nature, and La Masia talent Jaume Jardi belongs to this species as well. Nonetheless, if we had to choose, we would say Jardí is more similar to Carles Pérez than to Pedro. What does this mean or imply? Well, in terms of conditions, Pedro is more agile and elusive, with electric shifts in direction in tight spaces, dizzying pace and accelerated movements.

By contrast, Carles, stronger and a bit heavier, has a lower centre of gravity and is smoother and more precise in his dribbles thanks to his close control. In this sense, Jaume shares many attributes with Pérez. Strong lower body, power, explosiveness, terrific change of pace, quick shifts in direction and ball glued to his left foot. When Jardí has to work without the ball, he knows when to stretch the opposing defence by staying out wide, and when to come inside and occupy a freed space in the centre.

One of the most surprising and remarkable things about the 17-year-old is how fast he is in his execution. He needs very little time and space to pose a threat, and then, with his first-class left foot, he can place the ball wherever he wants. His favourite action: receiving in the right flank, cutting inside and unleashing his trademark powerful shot to the far top corner – this was exactly how he scored against Slavia Prague in the Youth League this past Wednesday.

What does the future hold for Jaume Jardí?

Jaume Jardí, while he was considered a child prodigy back in his days at Reus, doesn’t have the fame of many other prospects at La Masía and may be going under the radar for most people. This could actually be positive for his evolution, though. The Catalan 17-year-old reunites all the features required to succeed as a winger at Barcelona: intelligence, positioning, individual quality, technique, vision…It wouldn’t be shocking at all if, in the future, he followed a similar path to the first team to that of Carles Pérez. Be that as it may, Jardí has his own style and will certainly make his way to Barcelona’s senior squad one day in his very own manner. Do not sleep on him.

Previously: Episode 4 – Michal Zuk
What did you think of this article?