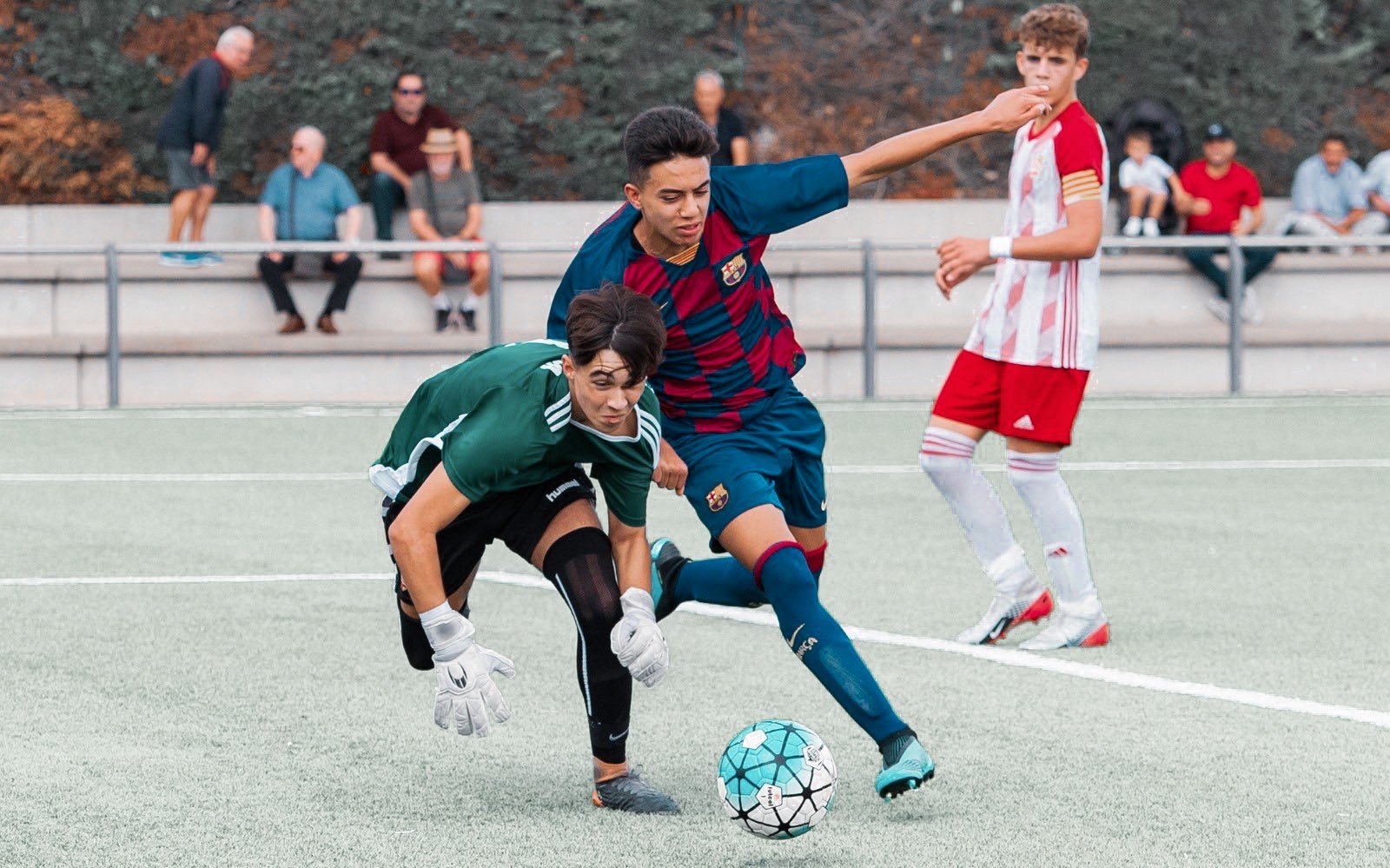 A thorough analysis of La Masía flamboyant winger Ilias Akhomach. A look at his profile, playing style and expectations for the future.

One of the worst things in youth football is putting nicknames to the kids and hoping that they become the like-for-like replacements of their idols. This tends to happen very often in order to make comparisons on the playing style, but can be very detrimental for the boys as it means adding extra pressure on their shoulders. For example, Lionel Messi was once labelled “the new Maradona” as the Argentinian media desperately searched for the heir to the former Napoli legend.

This by no means is something unusual at La Masía either, with the likes of Bojan Krkić and Gerard Deulofeu being called “the new Messi” in the past. This puts the spotlight on 17, 16 or even 15-year-olds, when their evolution would instead be much smoother and more serene with lower expectations and less attention from the general public.

Even if being called ‘the new X’ and being linked to a legend of the game may seem a reason for pride, the footballers themselves often try to avoid such comparisons. Andrés Iniesta once said that he could not be the new Laudrup, as he had to be the first Iniesta instead. Unfortunately, though, these labels have become increasingly common among football fans. What is even more worrying, however, is that someone with a high position in a top club like Barcelona publicly says that he has “the new Messi” under control. Back in November, Barça’s academy director Patrick Kluivert expressed that “in La Masía we already have the new Messi”. Later, Cadena SER revealed that this “new Messi” is Ilias Akhomach.

It is outrageous to even think about that, and it is even more disgraceful to say it openly when you are the head of the entire academy and are supposed to protect and track the development of thousands of talents. That said, the sudden rise in interest in Ilias Akhomach doesn’t come only from Kluivert’s words, but from his incredible evolution in recent months at La Masía. In this article, we will review not the next Messi, but the first Ilias.

Ilias Akhomach Chakkour, of Moroccan family, was born on 16 April 2004 in Igualada, in the province of Barcelona. He began playing football at his hometown club, Hostalets de Pierola, as his passion for the sport was awaken by watching his older brother Anuar play. He was his inspiration. After two years, Barcelona recruited Ilias and added him to the Prebenjamín squad. Now it was Anuar who admired his younger brother and couldn’t miss a single game from him. Nonetheless, in his final year as an Alevín, Ilias Akhomach didn’t make the cut in the leap to 11-a-side football, and he was forced to leave La Masía.

He did not stop there. He had a lot of quality in his boots and he only had to prove it. For this reason, in 2016 he moved to Nàstic de Tarragona, one of the best teams in Fut-11 in Catalonia. There he stood out greatly. In that campaign with Nàstic’s Infantil B, he was a nightmare for any rival, including Barça, who faced him in several tournaments. In one of these, at the Internacional Carnaval Cup de Argentona, he captured the attention of the blaugranas again.

Jordi Roura was impressed, even if he didn’t recognise him at first. Aureli Altimira did. After that contest, those in charge of La Masía admitted their error to the family of Ilias Akhomach. They offered him a long-term contract, but the rising star already had many offers, including from Real Madrid. Even so, Ilias was not resentful and decided to return to Barcelona, the best place to continue with his development.

In 2017 he moved to Barça’s Infantil A. His adaptation was very fluid, both on and off the pitch, and little by little he started to make a name for himself in the academy. Now, at Sergi Milà’s Cadete A, he has continued to be one of their main figures in another great generation in the making. Ilias will soon be turning 16, so the technical secretary is already looking to offer him his first professional contract. According to reports, the renewal negotiations for Ilias and also Pablo Páez are already underway. Two gems for the culés who have obviously attracted great interest from foreign clubs, but Barcelona must look to renew them no matter what. Besides, at international level, Akhomach holds the dual Moroccan and Spanish citizenships, but he has lately been playing for Spain’s U-16. For club and country, Ilias is progressing at an impressive pace.

Ilias Akhomach certainly is one of the most promising footballers at La Masía at present. Being left-footed, he can act as a right winger, attacking midfielder or forward. Actually, a week ago he even played as a false 9 and scored two goals, including a wonderful long shot, in a 2–2 away draw against CE Europa, which unfortunately ended the Cadete A’s flawless run. Notwithstanding, while he can be deployed as a mediapunta, he is not the same type of player as Brian Peña. Ilias is more electric and direct, a priori making him ideal for the right-wing role.

Ilias is a dribbling expert. Whether through the wing or in the middle, he continuously causes headaches to his rivals. A specialist in tricking defences and wreaking havoc on them, he is unstoppable when he has the ball at his feet and is at full speed. He has a wonderful technique which he combines with his ruthlessness, audacity and imagination. He’s a magical and tricky forward-thinking player, with a one-one-one within reach of very few. He moves past opponents very easily, almost effortlessly. His natural ability to glide through defenders with elegance and unpredictability make of Ilias Akhomach one of the most fun prospects to watch at La Masía.

The 2004 generation unquestionably is a golden one at the academy. Pablo Páez Gavi, Diego Almeida, Arnau Casas, Marc Jurado, Biel Vicens, Ángel Alarcón, Antonio Caravaca, Xavier Planas, Aleix Garrido…Nevertheless, it used to lack someone with the talent to imbalance defences and add dynamism in the final third. Ilias, with his brutal capacity to assist and create chances out of nowhere, has provided just that.

What does the future hold for Ilias Akhomach?

A case could be made that 12-year-old Lamine Yamal and Ilias have fairly similar profiles. Both of Moroccan origin, they are two left-footed mobile, energetic and hugely influential footballers for their respective teams. And, of course, they are two of the brightest gems at the academy. That said, Lamine is quite younger and is still adapting to 11-a-side football. Ilias Akhomach, though, is also still very young, in spite of having showcased a frightening potential at La Masía. It surely is worth keeping an eye on him, both because he is extremely entertaining to watch, and because his ceiling is high enough to leave his mark at Barcelona. Still, it is way too early to tell, and with the ‘new Ilias’, like with any other prospect, a lot of calmness and responsibility is required – something which Patrick Kluivert did not have.

Episode 18: Brian Peña
What did you think of this article?