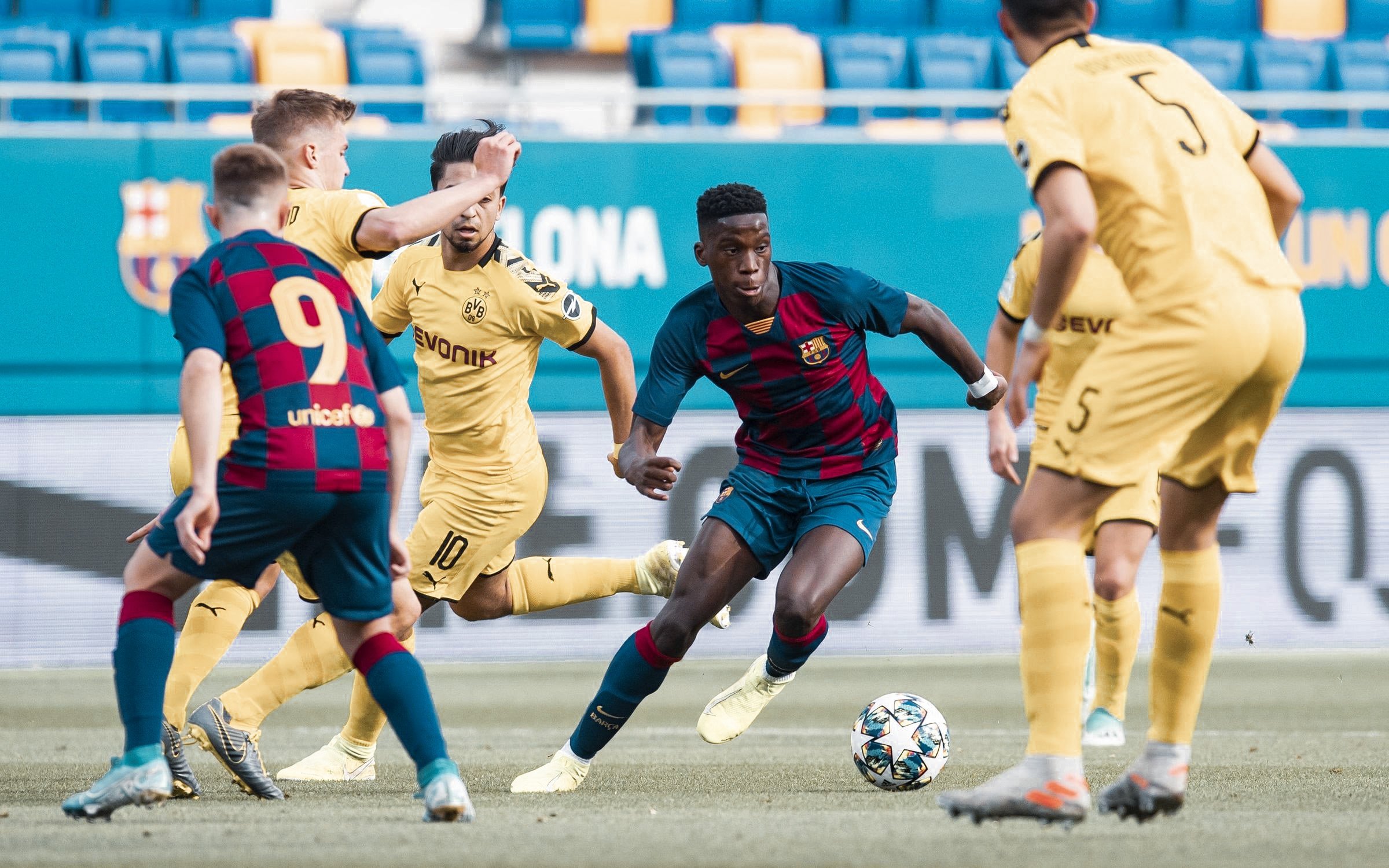 For García Pimienta, if Riqui Puig is promoted to the first team his replacement at Barça B should be none other than La Masía 16-year-old Ilaix Moriba. In this article we present an analysis of his trajectory so far, his player profile and the expectations for the future.

After Quique Setién’s arrival to Barcelona this week, it has been rumoured that Riqui Puig could finally be promoted permanently to the first team. Certainly Barça B coach García Pimienta would be extremely happy if this occurred, as he has always defended that, for the youth teams, preparing the talents for the elite is the main goal. Nonetheless, the promotion of Riqui would obviously affect the reserves’ performance, as the 20-year-old is the main creative output of a very harmonic unit. His move to the senior squad would create room for other La Masía youngsters to get minutes at the B and, according to SPORT, Pimienta could have chosen Juvenil A starlet Ilaix Moriba as his replacement.

Ilaix has mostly been playing with the U–19 this term, but he impressed in preseason with Barça B and García Pimienta has called him up for numerous training sessions and even utilised him three times in the Segunda División B. The Catalan boss certainly knows him well and has now decided that it should be the 16-year-old who should make a step forward and complete the trio alongside Jandro Orellana and Monchu Rodríguez at the centre of the park.

“They tell me I look like [Paul] Pogba, who I like, but [Sergio] Busquets and [Andrés] Iniesta were the ones that inspired me to play in midfield”

Ilaix Moriba did not feature in Barça B’s match on Wednesday because he was playing with Spain’s U-17, but the La Masía prospect could be starting with the B on Sunday against Nàstic de Tarragona, with Riqui expected to play against Granada. The appointment of Setién seems to have produced a very encouraging domino effect at La Masía already; Riqui Puig and Ilaix Moriba, the main beneficiaries so far.

Ilaix Moriba Kourouma is just one day away from turning 17, and, as mentioned earlier, he could receive a very nice anniversary gift in the form of a fourth appearance with Barça B. Born on 19 January 2003 in Conakry, Guinea’s capital, Ilaix and his family moved to Spain when he was a kid. He began playing for Espanyol’s academy, but, in 2010 and aged 7, Ilaix Moriba moved to La Masía. His first side at Barcelona was Cristian Catena’s Benjamín C, but even there he already showed glimpses of his immense potential as he soon moved to Marc Serra’s Benjamín A. Ilaix Moriba has always progressed steadily through the ranks of La Masía, excelling even if he has had to compete with players one or two years older than him.

In August 2018, while playing for Franc Artiga’s Juvenil B, he came to the attention of a wider public as he, by then 15 year old, scored a hat-trick in a 5–0 landslide victory over eternal enemies Real Madrid in the prestigious The Cup contest. From that moments, fans all around the world have kept a close eye on his development, though this also attracted interest from several top clubs, including Manchester City, Chelsea and Juventus.

The European giants were patiently waiting for him to turn 16 in January 2019 and get him to sign his first professional contract. Ilaix couldn’t make up his mind on whether to leave or stay, as his coach at the Juvenil A, Denis Silva, confessed to Bleacher Report: “It was probably the hardest moment so far in his football career. He was in negotiations with the club. He suffered a lot because he couldn’t play – for two weeks, he stopped playing [in case he got injured]. One day he sent me a message, ‘Denis, I’m going.’ Another day he came [to training] and afterwards he had to apologise because his agents told him he shouldn’t come. Everybody thought he was leaving, but in the end, the club made a very big bet on him, and he stayed”.

“They were a complicated couple of weeks for him. One minute, the boy is just playing football, trying to do his best, then his dad gets a phone call about a team that wants to pay them millions of euros for three years. That’s the craziness about football these days. A boy of 15 or 16 years old has to decide if he wants to stay at home or leave for another country with his family and make more money. I don’t think any young boy can be ready for that strain”

Denis Silva, Ilaix’s former manager at the Juvenil A

FC Barcelona, who did not want to lose another bright talents as had been happening in recent years – Eric García, Adrián Bernabé, Pablo Moreno, Sergio Gómez, Jordi Mboula, etc. –, decided to make a huge economic effort for him. In the end, Moriba’s agent, Jonathan Barnett – the same as Gareth Bale’s –, secured his client a deal until 2022, a release clause of €100 million and a salary of around €500,000 per year. It was the first time the Catalans staked so much on a 16-year-old, who is now earning almost like a senior player. Dealing with this pressure won’t be easy for the Spanish U–17 international, but the club picked him as one of the players they really had to bet on. And this is just another proof that Ilaix Moriba is truly special.

“I think it is necessary for Barça to bet seriously on five or six academy players. And Ilaix Moriba is one of these serious bets. He is one of those players with characteristics to be on the first team. No doubt. He has extraordinary capacities, but let’s see”

This season, Ilaix has remained at the Juvenil A, despite there initially was some controversy as Víctor Valdés was not using him as much as the board would have wished given the immense investment made. Nevertheless, he soon became an undisputed starter again and, with Valdés replaced by Franc Artiga, he has continued to progress in leaps and bounds. On 7 September, he made his official debut with Barça B in a 1–0 loss away at Ejea, as he replaced Sarsanedas in the 66th minute. He now has three apps in total for them. Between October and November he took part in the U–17 World Cup with Spain, although, sadly for them, they were knocked out by France in the quarter-finals (6–1).

“My first option always was Barça. I could have left earlier, but I decided to wait until the end”

For his imposing physical presence, Ilaix Moriba has often been described as the anathema to the prototype midfielder that has emerged from La Masía in the past. Xavi Hernández, Andrés Iniesta or, more recently, Riqui Puig have all been diminutive magicians that have stood out for their intelligence and mental agility rather than their strength or stature.

Òscar Hernández, manager at La Masía between 2007 and 2017, remembers how Ilaix used to be a nightmare for Barcelona due to his physique when he was still playing for Espanyol: “Every time he played on Espanyol teams against Barça they suffered a lot because he was so good. He was more developed physically than the other players – he was a different dimension – and his talent was obviously innate. He was the kind of player who is very destructive. He caused them grave problems. It was obvious that Barça had to sign him”.

Ilaix Moriba dominates multiple facets of the game, whether it is attacking, shooting, passing or defending | Photo by FC Barcelona

Ilaix is a dominant all-round midfielder, usually an interior even though he can play deeper as well. He is renowned for his athleticism, stamina, but, above everything, his talent and wide set of skills. There are no significant weaknesses in his game, but many valuable assets. Again, there are few better to describe his style of play than Òscar Hernández: “Ilaix has something that differentiates him a lot from the other academy players who play in the No.6 position. Traditionally, they have great positional sense and great touch. They are good for circulating the ball, for keeping possession.

“He has a quality that other No.6s at Barça don’t have, though – he’s box-to-box. He’s very good in front of goal. He can pick up the ball and burst forward with it. He can create play. He’s good in the air. He’s very multifaceted. Apart from the fact that defensively he’s very aggressive. He’s a complete player”.

“He’s very good at passing and controlling the ball. He’s not the best I’ve ever seen in those departments. I’m sure about that. There are young players who are more skilled in those facets, but in coordination, how he protects the ball, how he’s able to run with the ball and his shooting really catches your attention”

When watching him, many would think that physique is his main and only strength, but what really differentiates him from the rest is his broad range of capabilities. The fact that Ilaix is powerful and athletic doesn’t imply that he does not possess the cognitive abilities required in a Barcelona footballer.

While he may not be a natural passer like his teammates Jandro Orellana or Álex Rico, he has a great technical ability, excellent shielding of the ball, and is very dangerous inside and around the box. He can bully opponents on and off of the ball and score outrageous goals from long range, yet he also has a brutal capacity to influence the flow of the game and alter the rhythm thanks to his nature and ball-carrying aptitudes.

“He’s a little bit, maybe modern – in the English football kind of sense. It’s good to have him at Barca. The academy can’t be all about the Riqui’s or the Monchu’s – small players with a lot of talent. Football trends change every year, every month, but Ilaix is here not because he is tall or strong, but because he is very good in every facet of the game”

All these virtues don’t mean that he’s perfect, though. Even if his technique is extraordinary, his finesse in tight spaces has a lot of room for improvement. Between the lines, he can slow the ball circulation given that he doesn’t orient his body properly or prioritises an individual action over passing sequences and collective solutions. Rather than being patient, he can at times plunge into chaos and overuse the retention of the ball and his long shots. These are details that all need to be polished and that the La Masía coaches will need to pay particular attention if they want to transform Ilaix Moriba into a world-class footballer one day.

What does the future hold for Ilaix Moriba?

There is no question regarding Ilaix’s talent. While the leap from youth football to professionalism is always difficult, it by no means would be surprising if, in Riqui Puig’s absence, he managed to become a star at Barça B. His physical dominance may not make as much a difference when he has to fight against older and more robust veterans in the Second Division B, or even in Primera.

“I imagine myself alongside Ansu [Fati] and [Lionel] Messi”

That being said, Ilaix Moriba undoubtedly is a unique profile at La Masía. As a todocampista, he just needs to acquire some concepts, calmness and composure to become a more academic interior. At the same time, it’s this unorthodox and unconventional essence what makes him so unique. What’s clear is that La Masía will keep nurturing the first team and Barça B with top midfield prospects, and Ilaix Moriba is the latest demonstration of this.

Episode 16: Mika Mármol
What did you think of this article?