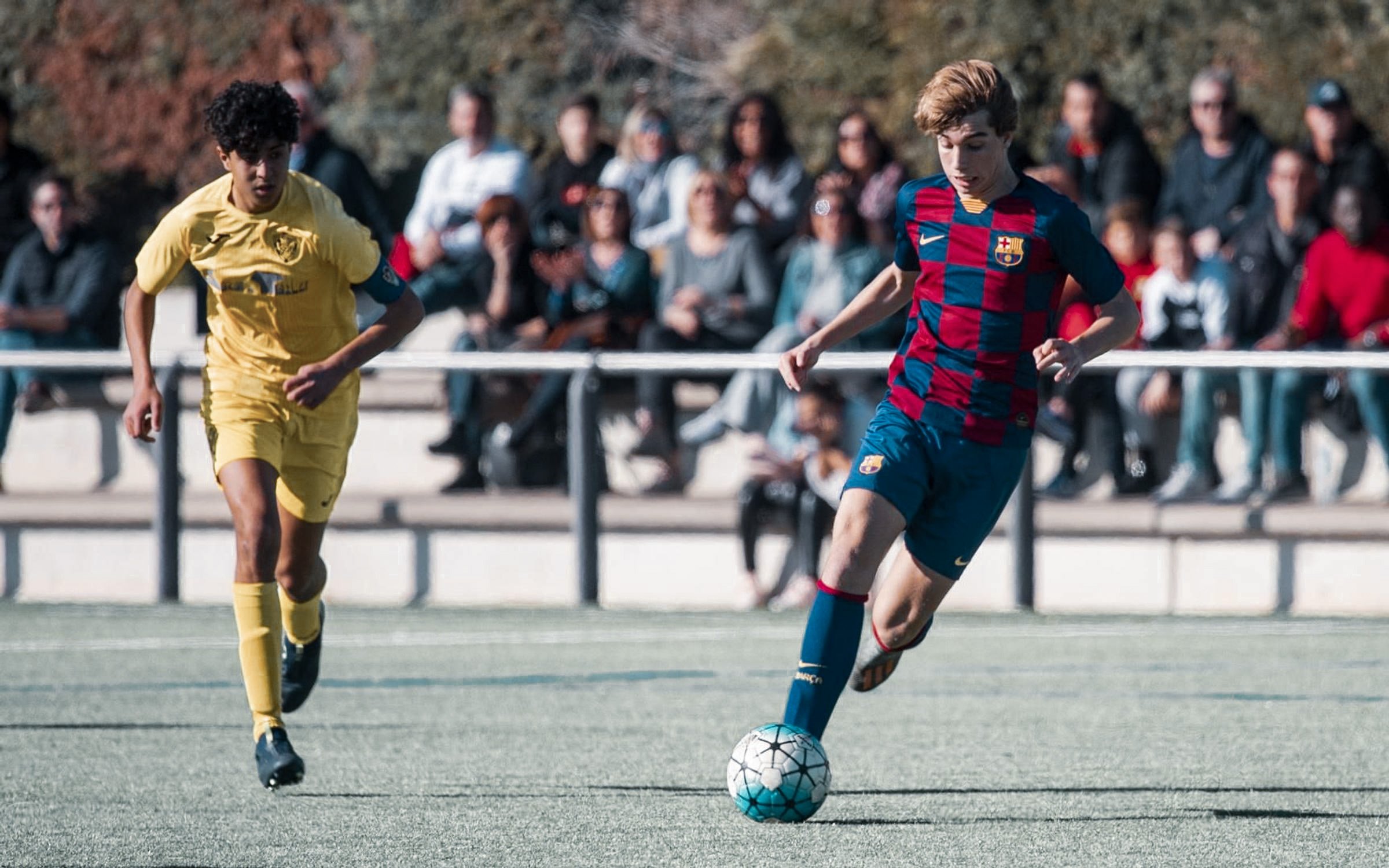 We take a closer look at another La Masía talent, Cadete B’s striker Iker Bravo. The long-haired wonderboy has taken significant steps in the last few seasons. Raising from the shadow of Cristóbal Muñoz, Iker Bravo has proven himself to both the Blaugrana fans and national coaches.

Football fans around the world have been wondering themselves in the last years what happened to La Masía. The youth academy where players like Lionel Messi, Andrés Iniesta, Xavi Hernández, Sergio Busquets and Jordi Alba were educated. The drought looks to be over after the excellent debut season for Ansu Fati. Ansu might be the next big thing at the Camp Nou, and if you were wondering – the amount of quality talents at La Masía is still astonishing: the latest proof is Iker Bravo. Bravo is an explosive attacking force for a Cadete B side that looks better than ever. The story of Iker Bravo is a story about fear and shyness, about one promise, and a mentality to reach the sky.

Iker Bravo Solanilla was born on 13 January 2005 in the Catalan city of Sant Cugat del Vallès. He started his footballing career when he was five years old, when his friends pushed him to join Espluguenc. Here he did not have a smooth start because of his shyness. He even felt it was ashaming when others saw him play. Iker didn’t want to play, but he wanted to watch the games. Therefore, his parents took him to a game and sat with him in the stands. His coaches invited him to play and, just like that, the Spaniard found the place where he belongs, in the field.

“Happy for my first call-up with the national team. Now it’s time to focus on my club, FC Barcelona“

One day, when Iker woke up, he didn’t want to eat. His parents were worried and it all ended in a quarrel. To fix the situation, his parents showed him clips from the FCB Escola tournament. The whole situation ended with the promise that Iker could go and play at the FCB Escola tournament. It was during this tournament that FC Barcelona found their interest in the young five-year-old. Some tryouts later, they were all convinced. They wanted him to join the Prebenjamí. Iker Bravo has never looked back since and is now a lethal centre-forward for the Cadete B, the Catalan team and, at last, the Spanish national U16 team.

At La Masía, Iker Bravo has always been big for his age. In fact, the opposing coaches would often ask if he could stop “shooting too hard”. You might believe that the powerhouse was using his great physical attributes to his advantage, but Iker has always had exceptional abilities with his feet. Iker’s ability to do the unthinkable gives us flashbacks of Zlatan Ibrahimović. The size, the flair, and the lethal goalscoring ability are just on another level.

Where Iker Bravo is most dangerous at is when he receives the ball at the 30 feet mark. His ability to shield the ball against opponents and his first touch to create room for his deadly finish are just outstanding. His way of reading the game when he makes his run into the box for a cross is remarkable as well. Another capability we find in Iker’s toolbox is his work rate. The way of pressing two central defenders is an overlooked art, but, after all, an art. Iker does it better than most attackers.

His smartness gives him the option to close out the centre-backs without the ball and put pressure on the ballcarrier. In this way, the Cadete B recover a lot of balls high up the pitch that they can use to their benefit. With 10 goals in 10 fixtures this season, Iker is the main reason the Cadete B find themselves at the top of the table. With a goal ratio of a goal per game, Iker proves why he is a starter for the Under-16 national team.

Because of his skillset, Iker Bravo can also be a part of the build-up play in his side. Coach Marc Serra has done a great job in getting Iker Bravo involved in the build-ups, which gives the Cadete B an extra man to generate superiorities. His overview is excellent, and his passing ability is also crisp sharp. It is easy to see how the Cadete B is lacking attacking threat when Iker is off the pitch.

How does the future hold for Iker Bravo?

Last season was an awful one for Iker Bravo’s team. With a new coach and a new system, the young culés were not able to perform to their true potential. Fans of La Masía started to lose confidence in the group that, one year earlier, had won La Liga Promises. Before this campaign began, Barça’s technical secretary made a move and gave Marc Serra the challenging job of getting the Cadete B back on its feet – and boy has it turned out well.

One of the most significant achievements of Marc Serra so far is getting Iker Bravo to perform at this incredible level. Raising from the shadow of the fantastic prospect in Cristóbal Munoz, the shy boy has taken steps nobody could see coming. Well, except Marc Serra. More regular playtime with the older Cadete A might be in sight for Iker this spring. If Iker Bravo continues his outrageous development, it wouldn’t be surprising to see him join the 2004 generation on full terms next year.

Episode 13: Nico González
What did you think of this article?