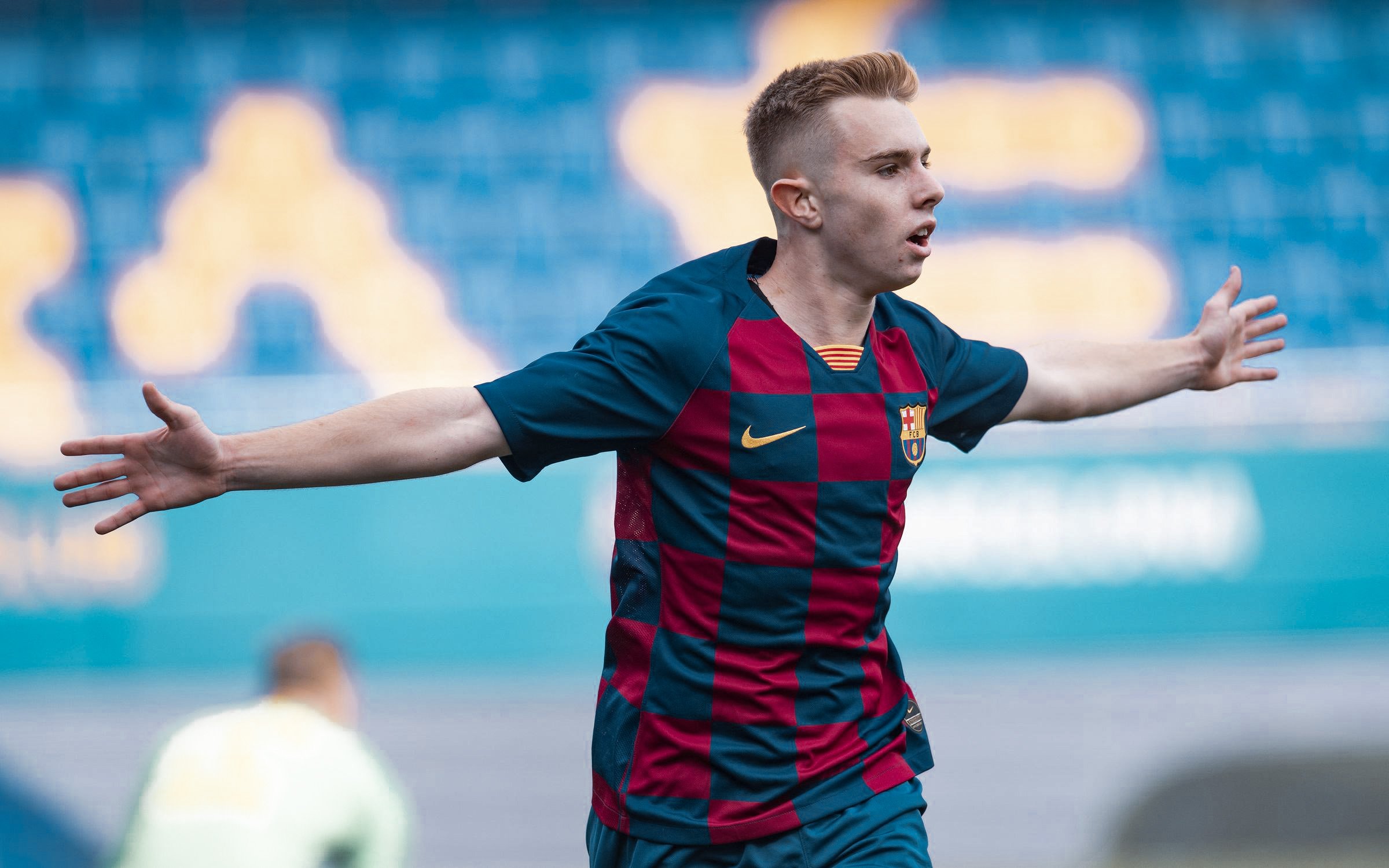 A comprehensive analysis of La Masía centre-forward Gerard Fernández, or Peque. A review of his profile, style of play and what to expect from him for the long-term.

The shortage of attacking options at Barcelona is not only affecting the first team, but La Masía too. At Barça B, Abel Ruiz and Alejandro Marqués departed in the winter transfer window, Álex Collado has been alternating the senior squad with the reserves, and Hiroki Abe will be sidelined for five months for a ruptured tendon in his right hamstring. Moreover, Rey Manaj, the striker signed for the B, got sent off in only his second game for the blaugranas, while he was called up by Quique Setién to face Getafe.

Gerard Fernández, on the instructions García Pimienta gave him before his debut with Barça B

With all these movements and absences, García Pimienta has also had to make use of the youngsters from a lower category. Over a week, his chosen forward to complete the front three was Gerard Fernández Peque, the protagonist of this week’s La Masía talents.

Gerard Fernández Castellano was born on 4 October 2002, in L’Hospitalet de Llobregat, a city located just next to Barcelona. When he was a Benjamín, he joined the academy of UE Cornellà, where he won, among other things, the prestigious Danone Nations Cup as an Alevín, in 2014. He was the captain of one of the most successful youth teams in Cornellà when, that same year, he received the call from FC Barcelona, his dream club. Peque, nicknamed like this by his close relatives, was eager to show as a blaugrana the quality he had demonstrated wearing the green colours of his previous side.

However, after just two years at La Masía, Gerard Fernández Peque departed, returning back to where he had played his best football. Far from becoming demoralised for having to leave Barça, the boy returned to Cornellà as a Cadete and displayed an insane level again. In his second spell there, he was the top goalscorer of his team in each of the three campaigns he played for them. In the 18/19 course, in his first year as a Juvenil, he scored 28 goals in the National League. Moreover, as a 16-year-old, he got his debut with Cornellà’s first team in the Copa Federación and also in the Second Division B.

“When you get promoted to a higher category, you really notice it. I experienced it at Cornellà already last year. Getting used to it is not easy, but you have to. You need to adapt as fast as possible to help the team if they need you”

GERARD FERNÁNDEZ, after his debut with Barça B

He was one of the sensations of Cornellà that season and, of course, he attracted interest from Barça again. Real Madrid attempted to sign Gerard Fernández too but, in the end, Peque chose to go back to La Masía. His brother Pau Fernández plays for the Alevín A as a goalkeeper, and obviously succeeding at Barcelona has always been Gerard’s dream.

In the summer of 2019, thus, the youngster signed his contract for the culés, in an act alongside directives Silvio Elías and Patrick Kluivert that was nothing more than a formality. He had played some days earlier against Ajax in the friendly and opening game of the Estadi Johan Cruyff. His official debut with the Juvenil A, by then coached by Víctor Valdés, came in September 2014 in a 1–1 draw…at the Municipal de Cornellà. His first appearance for the azulgranas was indeed against his former club.

His adaptation to Barça has been very smooth, both in terms of style and inside the dressing room, given that he met again with ex-teammates like Arnau Tenas and Ilaix Moriba, two key figures for Franc Artiga. So much so that, on 9 February 2020, Gerard was handed his debut for Barça B. Due to the absences in attack, he was given a start and took a very deserved opportunity with both hands. Assisted by Collado, Peque scored a delicate chip over the goalkeeper in the 34th minute to tie the match (2–2). Unfortunately, the match ended in a 2–3 victory for Villarreal B.

Even so, it was a day to remember for the striker, who became the ninth Juvenil player to debut at Barça B under García Pimienta: Jandro Orellana, Konrad de la Fuente, Nils Mortimer, Arnau Tenas, Nico González, Ilaix Moriba, Mika Mármol and Antonio Jesús complete the list. In addition, today Gerard has received his first call-up with Spain, the U–18, for a friendly against Denmark next week.

The nickname Peque comes from ‘pequeño’, small in Spanish, and Gerard indeed is a very tiny centre-forward. Therefore, he doesn’t stand out for his physique, his height or his ability to fight with the defenders, but for another far more powerful tool: his intelligence. Gerard Fernández Peque, in spite of having spent only two and a half years at La Masía in total over two spells, clearly fits perfectly into the mould of the prototype Barcelona striker.

“I consider myself a striker that knows how to protect the ball with the back to goal. In spite of being neither too strong nor too big, I have a good game at first touch and inside the area I’m smart and intelligent to search for spaces and score”

Despite his diminutive body, he is capable of executing with great precision actions that require some friction with the defenders. He often is the smallest player on the pitch, but doesn’t get pushed around and actually can fulfil the tasks of a poaching number 9 when required. The clearest example is the four goals he scored back in November against Stadium Casablanca – three of these were headers. Gerard is small but has a great killer instinct in the box, moving extremely well inside and around it. His excellent positioning makes him be in the right place at the right time and even be a surprisingly good header.

Peque positions himself superbly inside the area while he also works very hard and smartly off the ball. In the pressing, he contributes to closing down spaces and passing lanes to the opposition and is always active to take advantage of any slight mistake from his rivals. Moreover, when his teammates have the ball, he reads to perfection which movements need to be made either to free space for his colleagues, or to get into a shooting position himself. For instance, his first goal with Barça B came after a wonderful diagonal run inside the area when Álex Collado was patiently and delicately waiting for an opportunity to deliver his pass. To exploit a space someone has to occupy them, and Gerard Fernández is fully conscious of this.

While not the tallest, Peque is very intelligent and instinctive inside the box to get at the end of passes and crosses | Photo by FC Barcelona

Furthermore, apart from being tremendously clever, he has a very good technique and finishing. He has scored 18 goals with the Juvenil A this season, clearly the best in the team in this domain. As well as having this faculty to find those pockets of space in the box, he continuously drops deep to get involved in the build-up phase and always looks to set up his teammates. He’s fast and precise in tight spaces, delivering quick lay-offs, offering support for short passes, and detecting any gap between the lines of the opposing defence. His mobility and dynamism at the edge of the box, together with his sensibility in his first touch, is a blessing for Barcelona’s football.

As an all-round attacker with a sharp eye for a goal and even a pass, he has managed to transform his lack of imposing physique into an advantage. If he can’t scare defenders with his body, he will make sure to scare them with his prodigious mind. Agile, skilled and smart: the future looks bright for Gerard.

What does the future hold for Peque?

In 2014, when Gerard Fernández Peque joined La Masía for the first time, SPORT published an article on his arrival entitled ‘an Agüero for Barça’s Infantil’. It was actually his former coach at Cornellà, Luis Galindo, who compared the boy with ‘el Kun’. And actually yes, some could argue that Gerard shares several traits with the Manchester City forward: a diminutive figure with a strong lower body to keep the ball, agility, acceleration, quick feet, tactical intelligence, positioning in the area and incredible work ethic.

That said, there’s still a long way to go for him to reach that level, of course. Going from the Juvenil category to professional football, like the Segunda B, tends to be too big of a leap for many footballers. Marqués and, especially, Abel Ruiz saw that they could no longer make the difference against older and more experienced rivals which they did make at the academy versus players of their age.

Peque‘s debut with the B was very positive, but more than a full season is needed to really show one’s validity. With the absences in the reserves, Gerard should feature with them more often now, and maybe even frequently rotate with Rey Manaj up top. What is clear is that having Franc Artiga and García Pimienta is the best for the development of Gerard Fernández, so his talent is certainly in safe hands as he continues to reach new heights.

Episode 19: Ilias Akhomach
What did you think of this article?