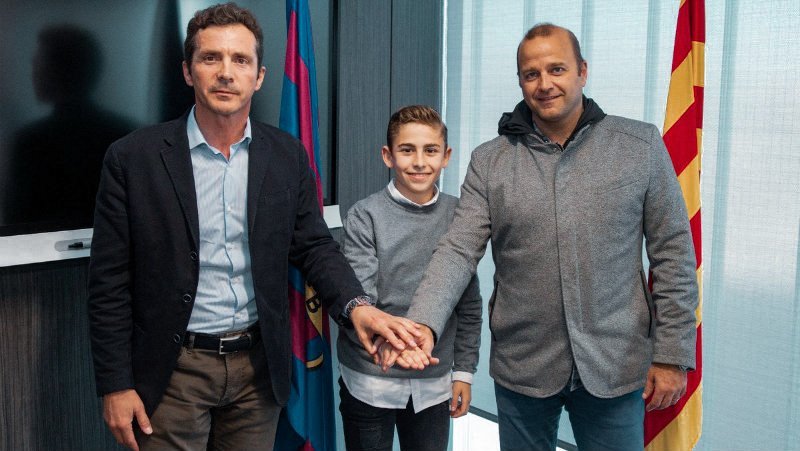 A detailed analysis of La Masía 16-year-old Fermín López. A review of his profile, playing style and expectations for the long-term.

Laureano Ruiz is one of the fathers of the Barça DNA, the Methodology of La Masía and the rondo. He was a visionary that laid the foundation for the philosophy and the principles that Barcelona is so renowned for at present. Many decades ago, he had to counter the myth that footballers had to be tall and strong. To do that, he started signing short talented players instead.

He organised games to see the kids play and judged them based on quality, not on their physical conditions. Yesterday, in an interview to Cadena SER’s Què t’hi Jugues, he declared the following on his beginnings at the Catalan academy: “I saw a poster in Barça’s secretariat that said: ‘If you come to offer a youngster under 1.80 metres, we are not interested’. I told them they were wrong. The best players in history: Messi, Maradona, Pelé, Di Stefano…all were short“

“Barça wanted to get rid of him [Pep Guardiola]. They considered him scrawny, bad defensively and ineffective in the air. What nobody saw was that he had the basic qualities to go far: he had game intelligence, speed in his execution, technique. If I hadn’t been at Barcelona, for sure he would have been sold to a Segunda Division club”

Johan Cruyff in his autobiography, on how he saved a young Josep Guardiola from the axe

Football has evolved a lot since. Without Laureano’s influence, probably Barcelona’s most dominant team, with Xavi, Iniesta and Messi all under 1.71m, wouldn’t have been possible. At present, La Masía is symbolised by its technical and smart footballers, not by the robust ones. Currently, at Barça B, Riqui Puig is challenging all beliefs on physique. But he’s not alone. At the Juvenil B, another tiny player is breaking the barriers of prejudice too: Fermín López.

Fermín López is another of the talents that were recruited by Barcelona while playing in Andalusia, southern Spain. Ansu Fati was one of them too. Ansu, though, was signed from Sevilla, while this week’s protagonist emerged from their city rivals, Betis. Fermín López Marín was born on 11 May 2003 in El Campillo, Huelva. Aged 8, Fermín began playing football at his hometown’s club, El Campillo, before moving to Recreativo de Huelva one year later. There he faced Barcelona for the first time, in a semi-final of the Torneo Internacional Ricardo Godoi, in Portugal. However, his next club, after only one season, would be Real Betis Balompié. Fermín was fulfilling his dreams, as he had been a follower of the Verdiblancos since he was a kid.

There, Barça started following Fermín, and were eager to watch him at La Liga Promises. Nevertheless, unexpected chickenpox left him unavailable to feature in the prestigious tournament. Every club was after him. Despite certain difficulties to move from 7-a-side football to F11, he regularly was the top goalscorer in his age groups. In the summer of 2016, Fermín López decided to move to a Spanish giant and, due to the quality of life and the project at La Masía, he chose Barcelona.

“Barça is my second family”

His father often travels the 1.000 kilometres from El Campillo to watch his son, but Fermín’s adaptation to the blaugrana system was fairly smooth. In his first season, he went from less to more, but ended with more than 20 goals for the Infantil A. Three years after his arrival, López is playing for the Juvenil B. In spite of some struggles to take the leap due to the competition in his position, Fermín López is still considered a bright gem at La Masía. In March 2019, before turning 16, Barcelona renewed his contract until 2022.

As mentioned previously, Fermín López is a very tiny footballer, but this is nothing new to him. He has always been one of, if not the, smallest players in his teams. That’s the main reason why changing from a category to another has continuously been challenging for him. He struggled to move from 7-a-side to 11-a-side football. Then, at Barça he started slowly even if he finished as one of his side’s top goalscorers. And even last term he played more games coming off the bench than from the start at the Cadete A. The same is happening this campaign at the Juvenil B, which already are big words. Although quality always ends up imposing itself, it’s undeniable that for someone so small he needs time to get used to things.

Notwithstanding, he’s much smaller yet much more intelligent and gifted than his rivals. Riqui Puig’s case was somewhat similar. He wasn’t a regular starter in the youth teams either but used his footballing brain to neutralise his a priori physical weakness. The short stature has given Fermín admirable agility and cleverness. The 16-year-old is very competitive and fights for every ball, and has had that big player instinct to be decisive in finals or Clásicos.

Last season, coach Carles Martínez experimented with him in various positions. Fermín López used to be a mediapunta or attacking midfielder, but the coach had many options for midfield. These included Txus Alba, Jorge Alastuey, Xavi Simons, Marc Casadó or Arnau Solà. Therefore, Fermín was deployed regularly on the left wing, showcasing his ability to cut inside with his stronger right foot. He can be direct and skilled in one-versus-ones, mostly thanks to his quick explosive movements, but his reading of the game and vision are extraordinary as well. The Andalusian teenager likes to position himself between the lines and pick out passes, dribble or unbalance tight defences. A wide set of skills for a versatile attacker.

What does the future hold for Fermín López?

As he continues to progress at La Masía, Fermín López will have to define his position on the pitch. Naturally an attacking midfielder, for Barcelona’s 4–3–3 he may have to choose between playing deeper as an interior or being a left winger permanently. What’s for sure is that, while stature can be a handicap at times, past and present examples have proven that it will never be a definitive problem. In fact, quite the opposite, as he has been using it to his advantage so far.

Besides, he will need to find regular playtime at the Juvenil B and continue with his progression, in the hope that he hasn’t stagnated. If he manages to overcome all the obstacle, Fermín’s future may look bright, very bright. Trust the quality.

Episode 10: Txus Alba
What did you think of this article?