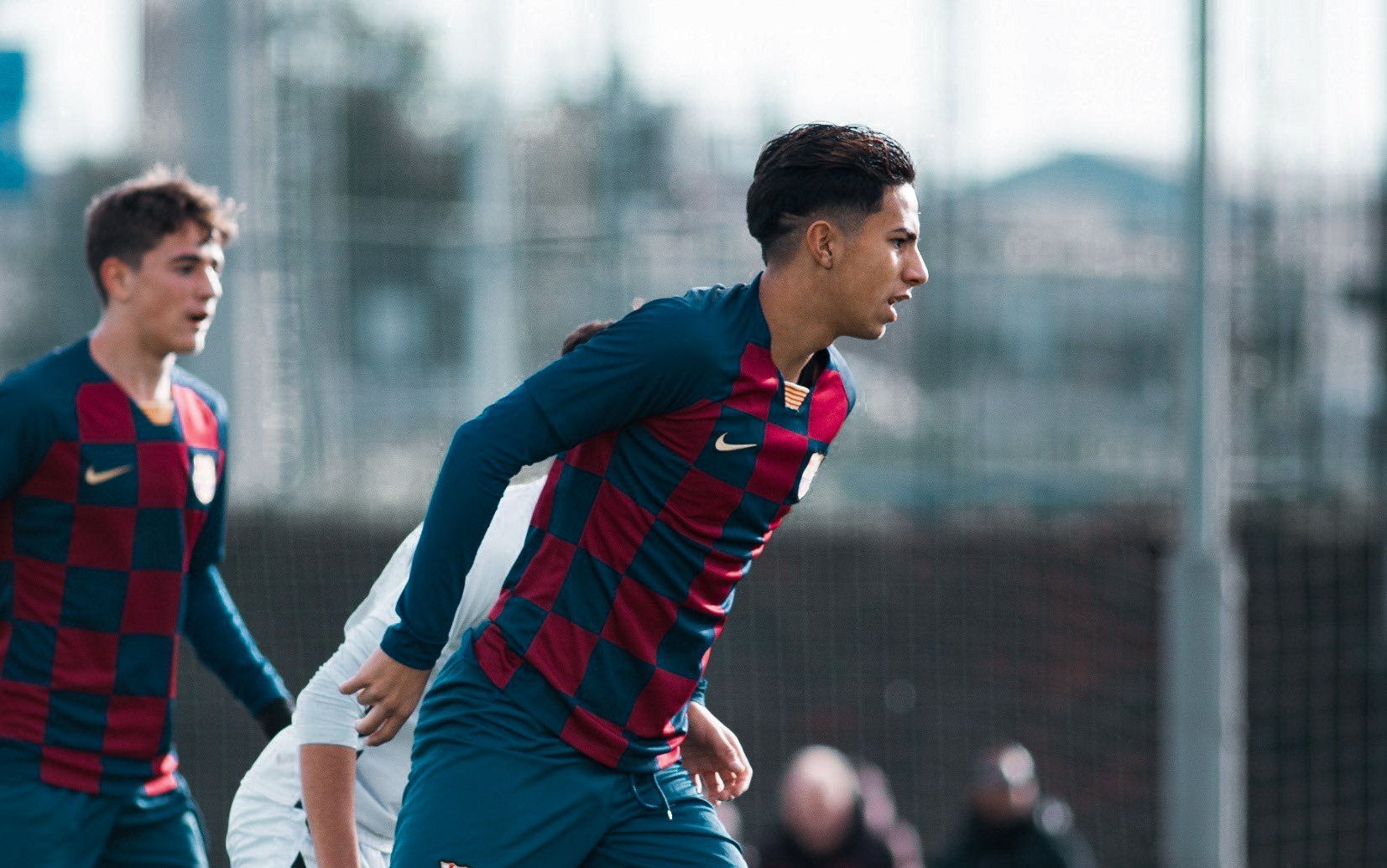 An in-depth review on La Masía promising centre-back Diego Almeida. An analysis of his player profile, playing style and potential.

There’s no position that better reunites and embodies all the sought-after qualities at La Masía than midfield. Vision, technique, intelligence, spatial awareness and positioning are all essential requirements for any Barcelona player and, in particular, any midfielder. From Pep Guardiola to the legendary trio of Xavi Hernández, Andrés Iniesta and Sergio Busquets, the Catalan academy has always produced and will keep producing, exquisite and dominant passers of the ball and readers of the game. At the other end, La Masía is not renowned for producing classic centre-forwards – despite the likes of Alejandro Marqués and Leo dos Reis – and centre-backs, even if Gerard Piqué and Carles Puyol formed a stellar partnership of two homegrown products.

More specifically, the exit to Manchester City in 2017 of Eric García, who could have been a potential starting defender and captain at the club, restricted the number of gifted centre-backs at Barcelona’s youth teams even more. However, there are some reasons to be optimistic when it comes to the blaugranas‘ backline, and those expectations have a name and surname: La Masía star Diego Almeida.

Son of Ecuadorian migrants, Diego Almeida Crespo was born in Rubí, a city of over 76.000 inhabitants in the province of Barcelona, on 12 February 2004. He soon began to play in a local football team called Juventud 25 de septiembre, but was then introduced to the FCB Escola, Barça’s football school, before joining La Masía’s Prebenjamín, the under 8s. At first, he encountered several difficulties in adapting to Barcelona’s possession and combinative football, but, obviously, after having been at the academy since very little, he began to assimilate the required concepts. It was in his last year as a Benjamín (U10s) when he made a definitive step forward, and since Diego Almeida has always been considered one of the players with the highest ceiling at La Masía.

“He wasn’t afraid of playing with people aged 27. He only wanted to do what he loved and he keeps doing it”

Marlon Almeida, Diego’s uncle, recalling when his nephew visited Ecuador for his second time when he was roughly 10 years old

At the start of the 18/19 season he was directly promoted from the Infantil A (U14) to the Cadete A (U16), without going through the Cadete B, which would have been the normal intermediate stage for someone of his age. This campaign he has remained at the Cadete A, competing again with those of his age group, but he took part in the prestigious The Cup tournament with the Juvenil B back in August.

While his parents are from Ecuador, Diego Almeida has already represented Spain several times in recent months | Photo by @_.diegoac via Instagram

Piqué and Puyol precisely are his idols and role models, though, in his other hobby, dancing, his great referent is another fairly well-known name among Barcelona’s fanbase: Yerry Mina. Going back to football, he already has some remarkable moments under his belt, in spite of being only 16. A goal to Espanyol in a Derby of the Catalan Cup when he was a Benjamín; another one to CF Damm in injury time in a crucial match for the top spot of the league when he played for the Alevín A; the award of the best player of the Torneo Lennart Johansson as an Infantil; or a remarkable strike in the final of the LaLiga Hope Cup in Kunming, China, only a few weeks ago with the Cadete A.

Moreover, Almeida has played for the U15 teams of both Ecuador and Spain, even if he seems to have definitely chosen the latter as he was called up for La Roja‘s U17 recently – although he, unfortunately, was not selected for the U17 World Cup.

While, as above mentioned, Diego Almeida struggled to get used to the azulgranas‘ trademark style, the 15-year-old seems to be following the patterns of the prototype Barcelona defender. Competing against players older than him has helped him reach a high level of maturity, and he commands the last defensive line with authority and personality. The right-footed centre-back is never afraid and always confident on the ball, with great intelligence and technique, which he uses to break the first pressing lines with defence-splitting passes, through balls and also some captivating dribbling skills.

He constantly uses body feints to trick his rivals and find the best passing lanes, even if that implies taking risks at times. He’s not scared of attempting long diagonal balls, which he uses often and with extreme precision, and vertical passes between the lines. He even has an offensive impetus that is reminiscent of Gerard Piqué. Whenever he has the chance, he likes to push forward and show that he’s good at getting at the end of things too. Diego has great physical conditions that he showcases both in the defensive an offensive phase, capable of scoring goals and headers consistently.

What does the future hold for Diego Almeida?

Smart, gifted, associative and very unique. There’s no need to put too much pressure on his young shoulders, but it’s not surprising that Diego Almeida is considered the most promising centre-back at La Masía, mostly after the exit of Eric García. In February, the bright defender will be turning 16 and will be able to sign his first professional contract. The board should make all efforts to ensure that Almeida keeps progressing at Barcelona and has a cleared path to reach the first time in the future. Barça can’t afford to lose another of their most precious gems.

Previously: Episode 2 – Lamine Yamal
What did you think of this article?