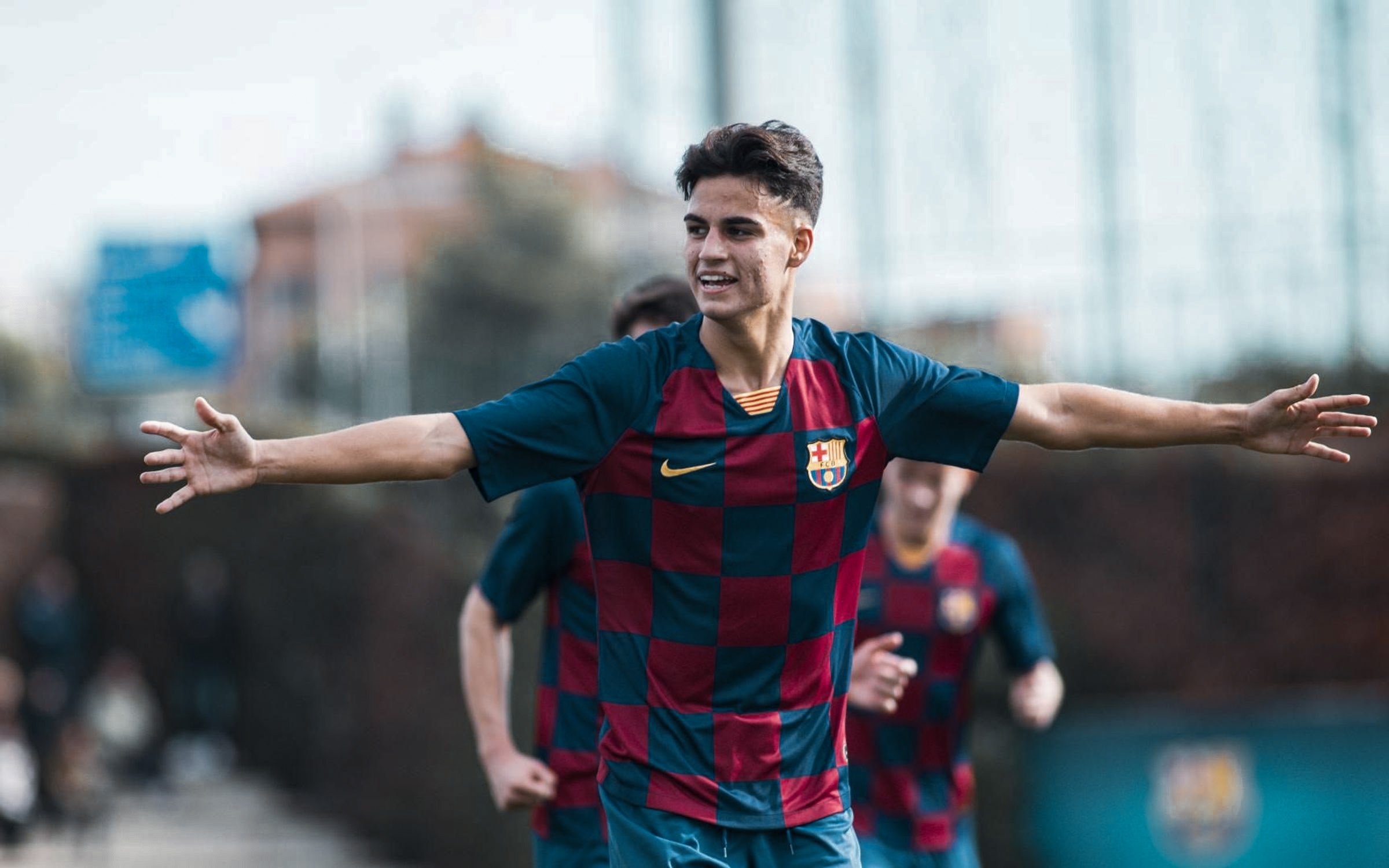 A profound analysis of La Masía magician Brian Peña. A review of his profile, style of play and what to expect from him for the future.

Barcelona’s football, and the one practised in its academy, has always been based around possession, on-ball quality and a proper execution. Midfielders are the embodiment of this style, even though the azulgranas have never stood out for having extravagant attacking midfielders, but academic interiors. However, from time to time some of these unconventional wizards emerge, characterised by their imagination and brutal talent. La Masía 17-year-old Brian Peña, the protagonist of this weekly analysis, has plenty of this.

Brian Peña Pérez-Vico was born on 20 June 2002 in the Catalan city of Vilafranca del Penedès. That’s where he started to play football, aged 4. Despite his shyness, having the ball at his feet relaxed and calmed him, and made his forget about everything else. When he was 6 years old, he attended a football camp organised by Barça, and that opened him the doors of the blaugranas. He did not join the club, though, but the FCB Escola. This school is not directly connected to La Masía, but they share the same methods. That’s where he started to develop his qualities, even if, five years after joining, he moved to CF Damm.

He had a standout season at Damm, following on with what he had learnt at the Escola. After his sensational year there, the youngster had offers from many big clubs, including Real Madrid, Valencia, Villarreal or Espanyol…yet his dream was to play for Barcelona one day. Therefore, Brian Peña chose Espanyol, conscious that he would have more chances of moving to La Masía in the future if he impressed with the Periquitos – as has happened in countless occasions with many other prospects.

He was right. He spent three years with Espanyol, attracting attention from Barcelona itself through great performances, including in the derbies. After having been monitoring his progression, it was in 2018 when Franc Artiga, who had just been named manager of the Juvenil B, insisted on signing him. The technical secretary of the club obeyed him and, in July 2018, Brian Peña joined La Masía. He was added to the squad of Artiga’s Juvenil B, coming from the Cadete A of Espanyol and having been international with Catalonia’s youth teams and the Spanish U-16. He scored his first goal for Barça in September 2018, in a 0–2 victory over Sant Andreu. Now 17 years old, he’s still playing with the Juvenil B, but being one of their main players and hoping to get promoted to the U-19 A next term.

Brian Peña is a right-footed attacking midfielder or also left winger. In his first campaign with Franc Artiga, he played in midfield and in front of Marc Doménech and Álex Rico, who could both act as holding midfielders. Notwithstanding, for Barcelona’s first team in the future, there may be no place for a number 10, so in a 4–3–3 he has mostly been employed as a left winger. For his position and style of play, he has often been compared to Philippe Coutinho.

He has that Brazilian flair in spite of being Spanish, with an undeniable technical quality and an admirable self-confidence to cut inside and take on defenders. He’s vertical and a very forward-thinking player, as well as one of the best dribblers in the academy. He has an extensive repertoire of technical actions, as he carry the ball and imbalance the opposing defences with any surface of his foot: the inside, the outside, the sole or the top of the foot. Therefore, he has a wide range of options to give curve, accuracy or power to his deliveries and shots.

He’s an associative footballer that reads the game well too, as he’s a wonderful creator that can pull the strings for his team. That said, Brian Peña is not characterised for being a passing maestro, but at La Masía he is more renowned for his personality, expertise in one-versus-ones and goalscoring instinct. He can either make surprise arrivals into the box or, more frequently, get inside the area after having drifted inside and beaten his mark. He has a great facility to create his own space to shoot and rapidly unleash a strike. Less than two weeks ago, on January 19, Brian scored a hat-trick against Damm in a 2–4 victory from the Juvenil B. That was his seventh goal of the season, being only two away from the nine he registered in the previous course.

If there’s something that Brian Peña must look to improve in his time at La Masía is his positional awareness. Curiously enough, it is a similar problem to the one Coutinho had at Barcelona, as he struggled to find his ideal spot in the side and was too attack-minded to be a pure interior. Peña also belongs to this endangered species of attacking midfielders, and as a winger he may not get his entire potential exploited. He tends to perform better when the games become more frenetic and open than when he is required to dominate positionally, wait and remain static. He can be a ball-hog at times and overuse his shooting, but, if he matures and develops nicely, he may have the gift to be a world-beater one day.

What does the future hold for Brian Peña?

At the Juvenil B there are very few differential talents that may be considered for the future or even the next Juvenil A. Brian Peña, though, is certainly one of these. For his vision, rhythm, acceleration, unpredictable dribbling and lethal shots, he has a very high ceiling in terms of his individual quality. At the same time, he’s one of those footballers whose evolution will really determine whether he has the potential to play at the Camp Nou in the long-term, or if he will fall short.

As often as he is compared to Coutinho, let us hope that he grabs the virtues from Philippe and not the flaws that made him disappoint at Catalonia. If he can successfully transform himself into an interior, and acquires all the tactical and cognitive concepts a Barcelona midfielder requires, then he definitely has the talent and imagination to be a true difference-maker. The future of Brian Peña will surely depend on his progression at La Masía.

Episode 17: Ilaix Moriba
What did you think of this article?