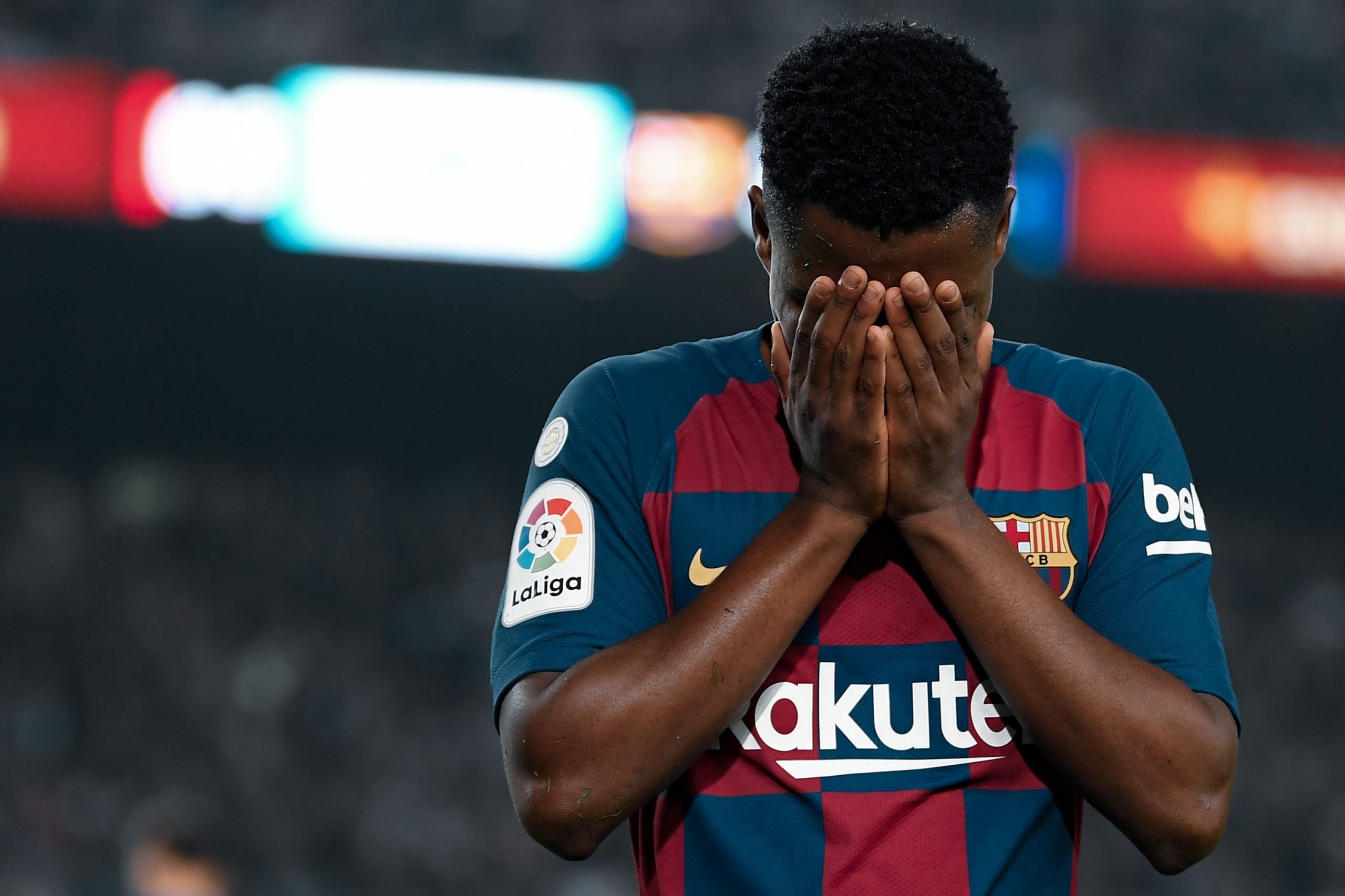 Making the headlines since day one, we present an in-depth review of La Masía young gem Ansu Fati, his profile, playing style and what to expect from him.

The first team is the main focus of most culés. The side that attracts most of their attention and the one that influences the emotions of so many people around the globe, every week. However, throughout its history, a large part of the success of FC Barcelona has depended on the homegrown products the club has produced.

From Pep Guardiola, Sergi Barjuán, Guillermo Amor and Chapi Ferrer, to Carles Puyol, Xavi Hernández, Víctor Valdés, Gerard Piqué, Pedro Rodríguez, Sergio Busquets, Jordi Alba, Sergi Roberto and, obviously, Lionel Messi. These are just some of the players that, over the years, have carried the essence of the institution, created hope when they were youngsters and made an impact in professional competitions. For these reasons, it would be completely unfair not to devote part of our efforts to promoting one of Barcelona’s most precious treasures: La Masía.

To this end, every week we will be discussing a specific talent from our glorious academy. Kids from the Prebenjamín (U8) all the way up to the Juvenil A (U19), and excluding the two highest ranks, Barça and Barça B, could feature in these new weekly series: La Masía Talents. To clarify, these are the names of the different age groups in Spanish football and in La Masía:

Also, it is worth noting that each age group is usually divided into ‘A’ or ‘B’, and sometimes ‘C’ or ‘D’, to separate generations. For example, the Juvenil A acts as a sort of U19 or U18, while the Juvenil B behaves as a U18 or U17. Players that, quality-wise, are well above those of his age can obviously get promoted. It’s the case of, among many others, Ilaix Moriba, born in 2003 and who should be playing with the Cadete A, but instead has the level to be a starter in Víctor Valdés’ Juvenil A.

Keeping this in mind, we kick off episode 1 of this new section with another footballer that is competing on a regular basis with people much older than him. And he’s none other than Ansu Fati, the boy that has been making the headlines in the past weeks with stellar appearances in the first team…at the age of 16.

Anssumane Fati, commonly known as Ansu Fati, was born in Guinea Bissau on October 31, 2002. However, when he was 6 he moved with his family to Herrera, a tiny town in Seville, in southern Spain. In 2009, shortly after arriving in Europe, he joined the modest Escuela Peloteros de Herrera and stayed there for three seasons.

His quality didn’t go unnoticed and he was signed by Sevilla’s academy, yet a year later Albert Puig would convince him and his father Bori to move to La Masía despite the interest from Madrid, Betis, Zaragoza or Sevilla themselves, who wanted to retain him. After learning that Ansu would move to Barcelona, Sevilla decided not to play him anymore and, in order not to be inactive, Fati chose to play some friendlies with Sextacampeones de Herrera, a Real Madrid supporters group.

“I have been watching football for 50 years and I’ve never seen anyone like him. He’s got a great personality; he’s not scared of anyone”

He and his elder brother Braima continued to impress for Barça as soon as they arrived. Ansu started to play with Marc Serra’s Alevín A, with teammates one year older than him, and he formed a lethal partnership with Take Kubo, now on loan at Mallorca from Real Madrid. In that league campaign, Kubo scored 73 goals and Fati, acting as a striker, 56. An unbelievable team that also featured the likes of Eric García, currently at Man City, and Arnau Tenas, goalkeeper for the Juvenil A.

Ansu would then suffer two major setbacks when, first, the FIFA ban on Barça didn’t allow him to play with the Juvenil B as he was less than 15 years old, and, second, he picked a serious injury in a derby with Espanyol. His progress was not hindered, though. In the 18/19 he was one of the stars of the U19, scoring 20 goals – top goalscorer in his side – and providing 9 assists in all competitions, including the UEFA Youth League.

Ansu Fati, with the Juvenil A in the 2018/19 UEFA Youth League | Photo by FC Barcelona

While his brother Braima plays on loan at Calahorra from Barça B, Ansu received in the summer of 2019 a new 3-year contract with an eye-watering €100-million release clause and, even if he didn’t travel to the preseason tours in Japan and the US and was expected to keep playing with the Juvenil A and Barça B at maximum, he was surprisingly called to train with the first team on 21 August. His parents first thought it was a joke.

Three days later, and with the injuries of Lionel Messi, Luis Suárez and Ousmane Dembélé, he was included in the squad to host Real Betis at the Camp Nou. Aged 16 and 298 days, before even appearing with the reserves, he became the second-youngest ever debutant for Barcelona in the league, after Vicenç Martínez, as he was introduced to the game for the final 12 minutes. Recently, Ansu was granted his Spanish passport that permits him to take part in the U17 World Cup, yet he could instead be called up for Spain’s U21 during the international break as the board want him to stay for the upcoming Clásico. Big words.

As normal, many people see Ansu Fati as an electric and fast left-winger. Notwithstanding, as mentioned previously, he used to be a centre-forward before arriving at the Juvenil. Then, José Mari Bakero, who was in charge of professional youth football at Barcelona, spoke with his family and told them that they would start using him on the left flank. Look where hs is now.

The teenager has a filthy technique to beat his mark in one-on-ones, yet he’s not the typical unselfish winger who only looks in one direction. Fati knows when to accelerate and when to slow down and link up with those around him, and understands the Barcelona’s possession football to perfection. He has great vision and imagination, which, combined with his dribbling skills, innate talent, and pace, make up a complete package that possesses everything you would look for in an attacker. A journalist from Barça TV Jaume Marcet defined him this way: “He passes like an interior, dribbles like a winger, assists like an attacking midfielder and scores like a striker“.

Still, in spite of all his gift, what has impressed fans the most during his first six apps for Barça has been his personality. You would usually expect a 16-year-old that is fulfilling his childhood dream of debuting at the Camp Nou to be somewhat scared or nervous, afraid of failing and of creating a negative impression on the millions of people watching. But Ansu is rare, unique.

In his first clash against Betis, he already showed glimpses of his quality, and since then he has always been among our standout performers, no matter the rival or the stadium. With or without the absences of our stars, he has consistently been taking on responsibilities and even leading the team in the offensive phase. Doing it against more physical and experienced defenders, sometimes double his age, and in the best competitions in the world. He obviously seems to be dealing with pressure well.

“He’s pure anarchy when he plays, and you need to give this kind of talents liberty, not hide them out wide: they need to do what’s natural to them. He’s the jewel of La Masía”

Curiously enough, where he probably has the most room for improvement is in his finishing. He has already found the net twice in the First Division, one of them being a header in spite of being 1.78 meters tall, and he mostly creates his own chances by running into free space. He registers many shots per 90 thanks to this extraordinary positioning and anticipation and if he converted more of the goalscoring opportunities he generates, he could end up with scary figures.

What to expect from Ansu Fati?

When analysing other gems, we may say things such as “he has a ceiling high enough to reach the first team” or “he could be a valuable alternative for the squad”. Ansu, though, is bigger than that and has outpaced those of his same generation. The Guinea Bissau-born attacker has already ticked the box of debuting and shining in the elite, so the next step should be not to lower his level and keep performing on a regular basis. We have seen countless examples – Bojan Krkić, Marc Muniesa, Gerard Deulofeu, Adama Traoré and Munir el Haddadi, to name a few – of precocious talents that failed to live up to expectations at Barcelona over time. Nevertheless, every case is different and Fati will look to write his own history.

When he was (even) younger, you could already predict that he had the ways of a superstar, but the most exciting part is that he has already proved that he can translate this potential into a reality in the A-side. La Masía’s crown jewel. The onus now is on us to protect him and have patience with him. If he has to return to the Juvenil A or Barça B in order to get more playtime, so be it. Remember: he’s only 16 years old.

Episode 2 – Lamine Yamal
What did you think of this article?