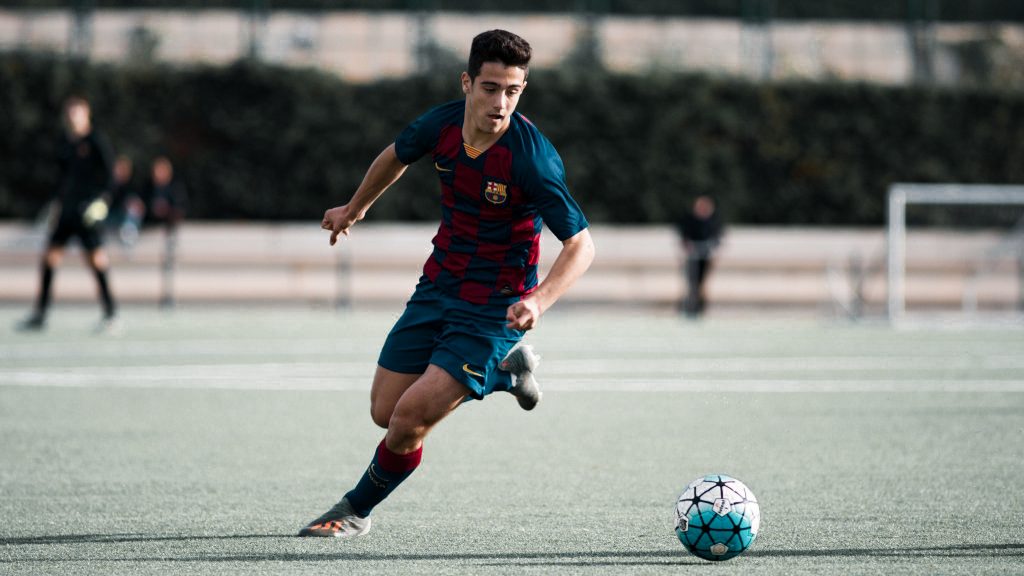 A thorough analysis of La Masía attacker Ángel Alarcón. A review of his profile, playing style and expectations for the future.

It’s not the first time, nor the last, that the golden 2004 generation from the Barcelona academy is mentioned in this series. The current Cadete A, coached by the also excellent Sergi Milà, has some delightful gems with a scary ceiling and promising future ahead. After having covered centre-back Diego Almeida, midfield maestros Pablo Páez Gavi and Aleix Garrido, and electric and skilful winger Ilias Akhomach, it’s time to discuss in the latest episode of La Masía Talents another sensational forward from the U16s: Ángel Alarcón

Born on 15 May 2004, Ángel Alarcón started playing for Vista Alegre de Castelldefels. There he already showcased glimpses of his quality, and often competed with players older than him. He even made a trial to enter the FCB Escola at a young age, but it was RCD Espanyol who recruited him in the end. At Espanyol he grew in leaps and bounds, acting as an attacker and mostly as a striker. With the Periquitos, Ángel became one of the brightest prospects in their academy, apart from their best Infantil.

But Barça, who had been tracking Alarcón for some time, did not hesitate to sign him in 2018. So that summer, aged 14, the youngster switched clubs in Barcelona as he joined La Masía. He was added to arguably the most special generation from the azulgranas, the 2004 class. He began with the Cadete B, scoring his first goal as a culé in September 2018 in a 2–1 win over Sant Andreu at the Ciutat Esportiva Joan Gamper. His adaptation was very smooth and, with the rest of his teammates, he was promoted to the Cadete A this season. That said, the 15-year-old has already made his debut with the Juvenil B, and also with Spain’s U–16. Journalist Albert Rogé has stated that Ángel will renew with Barcelona soon, as he will be turning 16 in May and will be able to sign his first professional contract. Furthermore, this would see him, alongside Diego Almeida, Gavi and Ilias, be promoted to the Juvenil A, without going through the Juvenil B. Four unbelievable prospects.

Ángel Alarcón combines the power and explosiveness of a winger, with the positioning and instinct of a centre-forward. This allows him to be capable of playing anywhere in the frontline. While with Espanyol he was more of a striker, at La Masía, as well as with his national team, he has been deployed mainly as a winger.

In particular, from the left, cutting inside and always facing the opposing goal. In spite of not being the quickest nor a natural dribbler, he does have an excellent physical constitution and outstanding technique. He is thorough and very direct when carrying the ball.

Despite his versatility and not being the main reference, Ángel Alarcón has been his side’s top goalscorer for each of the past two campaigns with the blaugranas. Last term he recorded 22 goals in 26 league matches with the Cadete B, and in the present season he has 15 goals in 18 games. If we add up the other tournaments and his figures with the national team, that’s a total of 49 strikes in 60 matches in two seasons, per @ViscaBarca1233.

Ángel is a complete and very smart attacker with determination, acceleration, energy, creativity on the ball, and brilliant finishing from short and long range. With his powerful shots and the eye for goal of a number 9, he manages to find the net frequently. Off the ball he’s hard working and wise too. All in all, a flexible forward that reunites on-ball quality, intelligence, instinct and physical conditions.

What does the future hold for Ángel Alarcón?

Ángel Alarcón has all the qualities to develop into an excellent attacker in the longer term. Perhaps he may need to define himself better in order not to fall short both as a winger and as a striker when he makes the leap to professional football. Nonetheless, that is not expected to be the case, as the teenager has excelled in both roles so far. The step to the Juvenil A will be a big one for him, and he will need some adaptation as the difference from the Cadete category is not small at all. However, he is bound to adjust to it and, while he is only 15, he certainly has the talent to be an exciting footballer in the future.