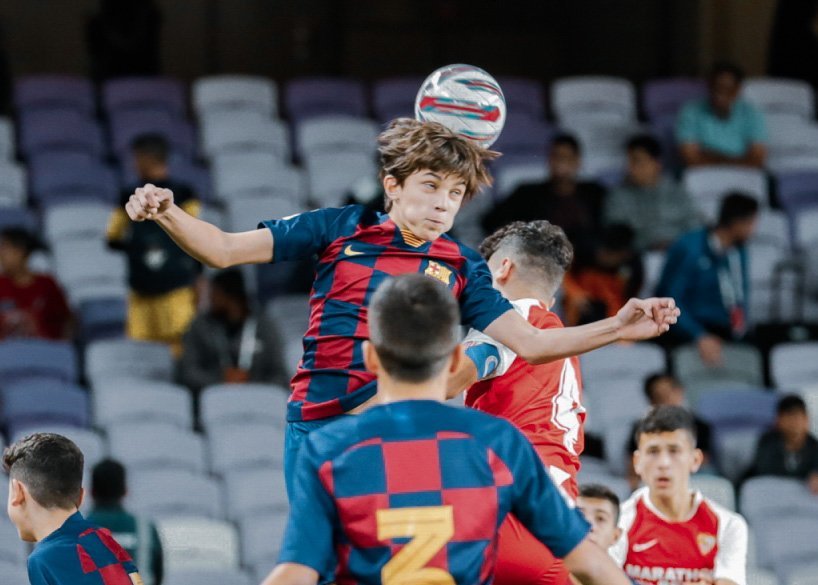 An in-depth analysis of La Masía 12-year-old centre-back Andrés Cuenca. A look at his profile, style of play and what to expect from him for the future.

Culés can feel blessed to have in their youth ranks two exquisite and very promising left-footed centre-backs that share by surname Cuenca. 20-year-old Jorge Cuenca, despite suffering an injury in the middle of the season, has been evolving very positively this campaign and it could be worth considering him as an option for the first team soon. However, this episode’s protagonist of La Masía Talents is someone much younger, but that has also been showing glimpses of high potential: Andrés Cuenca.

Born on 11 June 2007 in the tiny town of Adamuz, in the Andalusian region of Córdoba, Andrés Cuenca has already been a journeyman in Spanish football in spite of his young career. His rise has been very rapid, as in the space of four years he has gone from playing for the Prebenjamín of his local Vilafranca CF to moving to Barcelona. After Vilafranca, Andrés signed for bigger clubs of the dimension of Córdoba and later Sevilla. Last season, with Sevilla, he was, alongside the tall and physically imposing Ibrahima Sow, one of their standout figures in the prestigious tournament of La Liga Promises.

Of course, such displays attracted the attention from the two big fish in Spain: Real Madrid and Barça. Obviously, as usual, the smaller team, which in this case was Sevilla, felt the frustration of seeing how they could do nothing when one of the giants persuaded the youngster and his family and recruited him for no money due to his tender age. In this occasion, after the boy’s decision, the blaugranas were the lucky ones to secure Cuenca’s signature, sealing a contract for this season and three more.

In his first campaign at La Masía, Andrés Cuenca has been playing for the Infantil B of Albert Puig. While Barcelona has not been too renowned for producing top-class centre-backs in recent years, the 2007 generation does possess some exciting defensive talents. Landry Farré, who is playing with kids one year older than him at the Infantil A, may be the most spectacular or mature of them all, but the Infantil B continues to have two excellent centre-backs that form a stellar duo at the back. One is Pau Cubarsi, a goalscoring rock with a style that is reminiscent of that of Gerard Piqué. And the other is Andrés Cuenca.

Andrés actually shares several characteristics with Barça B’s mentioned Jorge Cuenca: great anticipation, composure, confidence, remarkable footwork and a delicious left foot to carry the ball forward and break pressing lines with pinpoint passes and deliveries. His ball-playing qualities certainly are some of his greatest features, being authoritative and with the head held high to scan the field and pick the best passing option. In the video below he can be seen carrying the ball from his own box all the way to the halfway line, and assisting Marc Bernal against Juventus during the December edition of La Liga Promises.

Furthermore, being left-footed makes him even more unique. Similar to what happens in the left-back position, these days it is very hard to find a talented left-footed youngster that chooses to play in defence. Andrés is one of them. With great anticipation for interceptions, he is very tall for his age as well. In such categories, stature can never be a parameter to judge someone’s qualities, but Cuenca does know how to take advantage of his physical, technical and tactical virtues. Fast, very smart in his positioning, and never rushing any tackle, Andrés Cuenca is a centre-back tailormade for Barcelona’s football.

What does the future hold for Andrés Cuenca?

Since he began to impress at Sevilla, it was clear that Barça had to set their sights on Andrés Cuenca. Not only for his performances but for a style that perfectly fits the azulgranas‘. Even so, and while his adaptation has been seamless, it is very early to tell how will the Andalusian defender evolve in the future. Particularly, a defender needs to grow physically and adapt to combating with more robust attackers. With this in mind, Cuenca certainly has the raw material, DNA and conditions to be what La Masía has been lacking for some time.

Episode 22: Aleix Garrido
What did you think of this article?