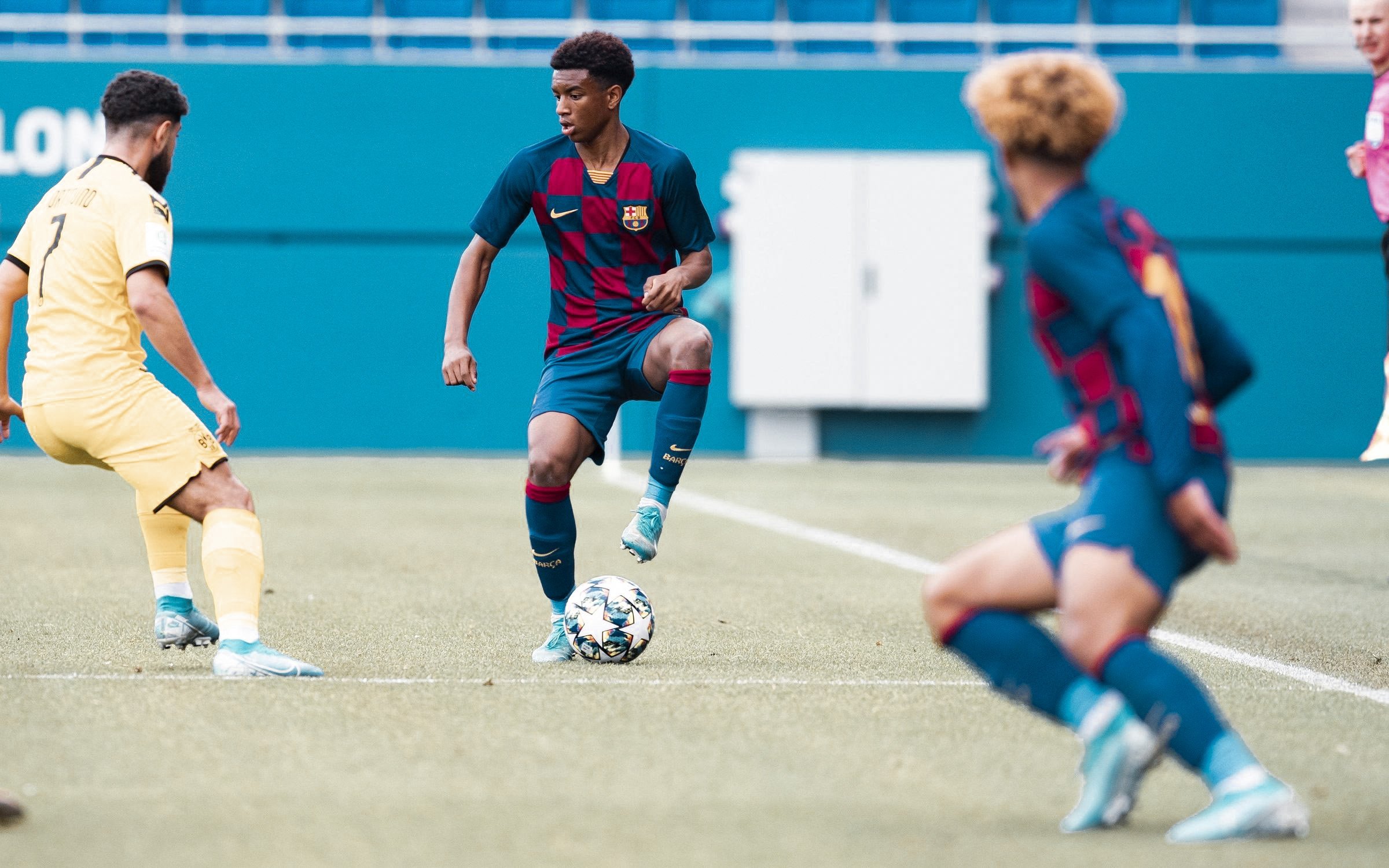 A detailed analysis of La Masía 16-year-old left-back Alejandro Baldé. A look at his profile, playing style and expectations for the future.

What are some indispensable traits for any Barcelona left-back? Speed, timing, technique, accurate distribution for short passes and crosses, capacity to run backwards and defend the huge spaces the backline leaves behind…Despite modern full-backs have adapted to such requirements, finding them in the market is not easy. At La Masía, though, full-backs are shaped to fit into this mould. The protagonist of this week’s La Masia Talents episode, Alejandro Baldé, represents the perfect blend of gift and power.

Born in Barcelona in 18 March 2003, Álex or Alejandro Baldé, like another Barça left-back in Junior Firpo, has Dominican origins. Unlike Junior, who was born in Santo Domingo, it’s Baldé’s mother who is a native of the Dominican Republic. Meanwhile, Álex’s father, Saliu, is from Guinea-Bissau – like Ansu Fati. At first, Baldé’s parents wanted him to begin his athletics career, as at school he was always the first in all races, even if the teachers gave him some seconds of disadvantage to compensate his dominance. Nonetheless, the boy preferred football.

When he was 4, he went to watch his 7-year-old brother Edy play at Sant Martí Condal. The team, though, were missing a player, and they asked the young kid to play that encounter with them. Alejandro impressed, and, when he was aged 6, joined the school of Sant Gabriel, where he started as a striker scoring many goals.

Espanyol and Barça chased him, and Baldé wanted to wear the blaugrana colours. However, Barcelona were too slow and in the end the family chose to accept Espanyol’s offer. There, as a centre-forward too, he kept shining, but he only lasted one year at the Periquitos‘ academy. In 2011, Alejandro Baldé finally moved to La Masia. Here he has proved what a hot prospect he is. Back in February 2019, he made his debut with the Juvenil B while he was still a Cadete A member. His contract was due to expire this past summer, with several Premier League clubs heavily linked to him, but Alejandro Baldé decided to renew his contract and remain at La Masía. Just two months ago, he made his fist appearance for the Juvenil A (U19) as a 16-year-old; now he is a regular starter under Franc Artiga.

Álex has his feet on the ground, but also possesses all the required technical and physical attributes to succeed as a left-back. As shown when he was just a kid, the man in question is an extraordinary athlete, lightning fast and super powerful. With the injury he picked last season, he gained some power and muscle mass, and now he’s unstoppable when he’s in full stride. Nonetheless, his biggest attribute isn’t his speed, but knowing when and how to use it. His acceleration and timing are very accurate, as well as being extremely talented on the ball.

Strong on one-versus-ones, a good passer, with a very precise first touch, great vision and quick shifts in direction and superlative body feints to protect the ball. We could say that the teenager has it all. In defence he’s still improving, but his athleticism and dynamism help him recover a lot of ground and be fairly solid against the opposing wingers.

What does the future hold for Alejandro Baldé?

It looked unlikely that La Masia talent Alejandro Baldé would be a starter with the Juvenil A this term, with him beginning the campaign with the Juvenil B and with Mika Mármol being outstanding at left-back as well. However, the versatile Mika is being deployed at centre-back frequently and this has created room for Álex, who is breaking down barriers already. He’s still maturing and developing, but sky may be the limit for him.

With Jordi Alba, Junior Firpo, Juan Miranda (on loan at Schalke) and Alejandro Baldé, Barcelona can feel proud to have some of the best Spanish left-backs in their respective categories. Still, as we always say, patience. When you’re just a promising boy, that’s the key to success.

Episode 7: Konrad de la Fuente
What did you think of this article?