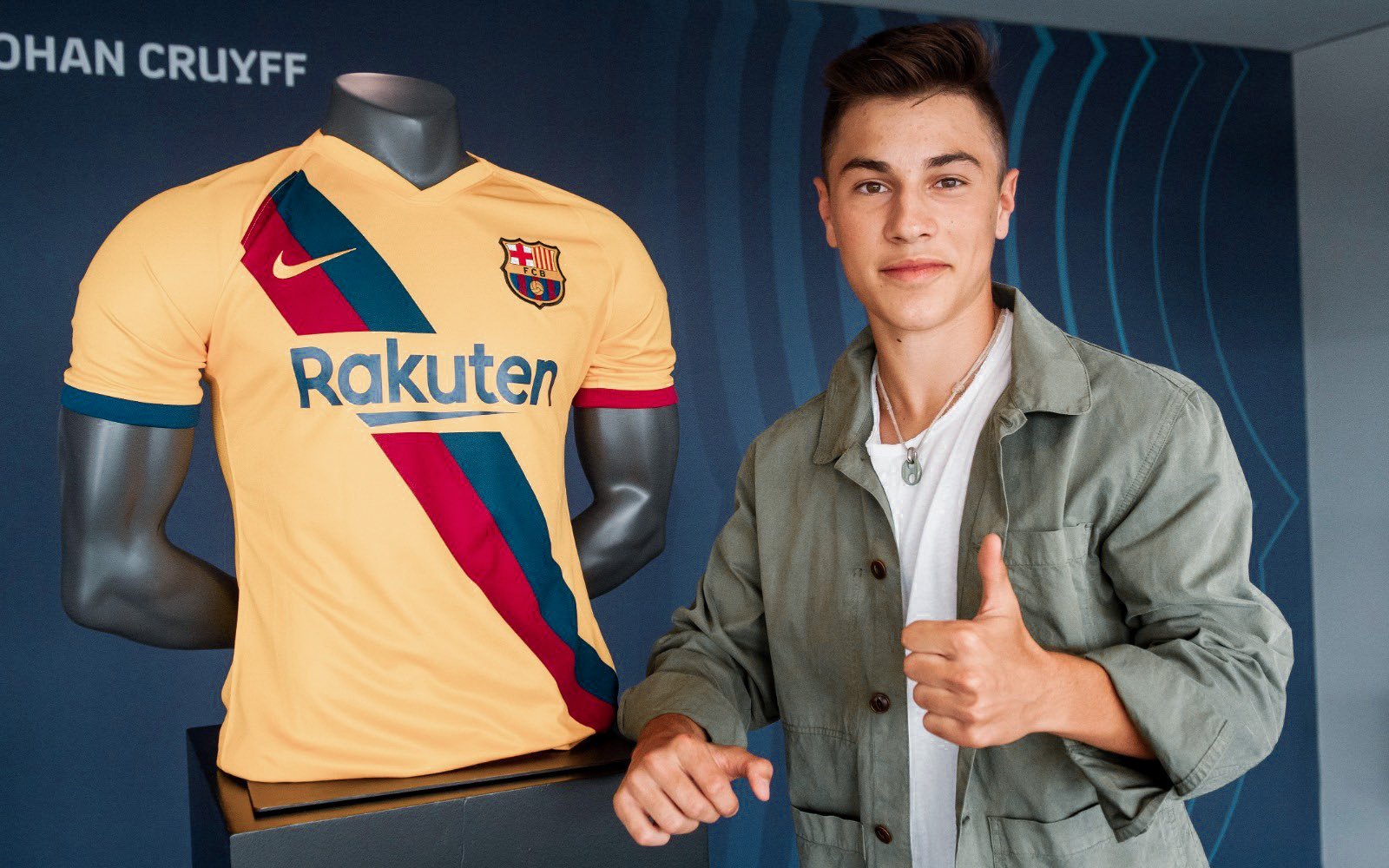 Sometimes talent takes time to come to light. While Adrià Capdevila is currently a substitute at the Cadete A, he’s a pure midfielder raised at La Masía and tailormade for Barça.

There are many circumstances that influence a youngster’s development, as well as many obstacles he has to overcome. It is extremely rare, if not impossible, to find a successful professional footballer that, when he was a young boy, did not have a single moment of difficulty, of people who did not believe in him, of indecision, of lack of faith, of problems of adaptation. At present, Cadete A’s Adrià Capdevila seems to be going through one of these tough moments. Nonetheless, he has more than enough talent in his boots, and in his head too.

Born on 12 January 2004 in the tiny town of Gurb, next to Vic, Catalonia, Adrià Capdevila has always had a smile on his face. He began playing for Vic Riuprimer REFO, until, ahead of the 2012/13 season, he was recruited for Barcelona’s Benjamín D. In the following campaign he was promoted to the Benjamín A, where he joined what would be his inseparable teammate and friend: Aleix Garrido. On and off the pitch, they have always been together ever since.

Understanding each other to perfection, they have made some La Masía enthusiasts link them to the duo of Xavi and Iniesta. Aleix is the number 8, while Adrià, the number 6, is more often compared to Xavi. Then the more creative and attack-minded Pablo Páez Gavi, arriving from Betis, was added to the mix in 2016, forming an incredibly balanced midfield trio in the extremely promising 2004 generation.

Still, it was Capdevila who won the MVP awards in most trophies they took part in. World Challenge Cup, St. Kevin’s Boys Club, Torneig Arnedo, MIC 2018…or the prestigious La Liga Promises in 2016, which Barça won. There Adrià started to grab many people’s attention, but it was in the World Challenge Cup in the summer of 2016 when he had his most applauded gesture. The Infantil B beat Japan’s Omiya Ardija by 0–1, but, instead of going to celebrate, the Barcelona kids saw that their rivals had broken into tears and went to comfort them. In particular, Capdevila consoled each of his Japanese opponents one by one.

“Our gesture in Japan is Barça DNA”

Their coach Sergi Milà later said about Adrià: “He’s Catalan from head to toe. We asked him what was he telling them and in which language did he speak them to, and he answered that in Catalan, but that he had understood them through gestures”. These values saw the Infantil B claim the prize for the Laureus Awards’ Best Sporting Moment of the Year. In victory and in defeat, Barcelona, and Capdevila, have been exemplary.

🤝 4 years ago, our U12’s put the ‘fair’ into Fair Play, by consoling their Japanese rivals at the Soccer World Challenge. 🇯🇵
❤ #TheBeautifulGame pic.twitter.com/MwYniCh6Be

It’s not the only admirable gesture Capde has had, of course. For example, after the 2016 La Liga Promises title, he expressed: “We dedicate it to the teammates that have not been called up”, as 11 players had to stay at home as only 12 were allowed to participate in the competition. And, in spite of being the captain, he let Diego Almeida lift the trophy too because “he has had a great tournament and deserved it”. For his attitude and values, Adrià represents all what Barça should be.

Unfortunately, the past season and a half has not been ideal for the teenager. In 2018 Biel Vicens arrived from Girona, and that added competition to his spot. Biel is, like Capdevila, a natural defensive midfielder, but with a greater goalscoring and attacking instinct, and more physical. The small stature and lack of imposing physique have seemed to penalise Adrià, apart from the change to a double pivot in the Cadete. Even so, Barcelona should make sure to trust talent.

Another somewhat incomprehensible situation is how Capdevila has never been called up for any of Spain’s youth national teams, despite, as mentioned, he had been picking most MVP awards for Barça until 2018. Let us hope that, soon, football does justice with the 16-year-old in club and country.

If there’s a position where La Masía has been producing hot prospects on a regular basis in recent years, that’s midfield. And, more specifically, holding midfield. Oriol Busquets, Jandro Orellana, Álex Rico or Adrià Capdevila himself. They are all pure Barça DNA, and Adrià is no different. He may be small, but his tactical and technical talent is immense. It’s his commendable maturity, way beyond his years, which allows him to obtain most of his advantages.

While, for instance, Aleix Garrido is super smart as well, in terms of intelligence and reading of the game Capdevila is one of Cadete A’s best. Always properly positioned, knowing which spot to occupy and which spaces to fill. That happens now, when he’s aged 16, but it happened when he was only 12 too, when him and Aleix where the ones who made the entire team move. By that time, in 7-a-side football, it was common to see Adrià drop deep to defence and add support to the lone centre-back, picking and passing the ball from there.

Capde has a brilliant mind, being very calm and a total controller from deep. His passes are very accurate, and his body orientation and controls always favour the ball circulation. He by no means is a regular goalscorer, nor a brilliant shooter, but he does have an eye for a pass to break lines and exploit any gaps in the opposing defences. His distribution, short and long, and after one touch or following a previous control, is superb too. He organises and dictates play from midfield. And then he’s a born leader with a great attitude. It’s mostly in the physical side where he has been struggling the most lately, but his quality remains intact.

What does the future hold for Adrià Capdevila?

Always one of the unquestionably best players of the 2004 generation, now Adrià is finding some difficulties to establish himself as a starter due to injuries, the competition with Biel Vicens and problems to keep up with the physical level of this category. However, his intelligence and tactical, technical and cognitive aptitudes should make us more optimistic. In fact, several years ago Aleñá and Riqui Puig even had the same problems. Hopefully, this is just a hurdle that he will eventually overcome, and his evolution will, in the end, be a positive one. A matter of trusting the process?