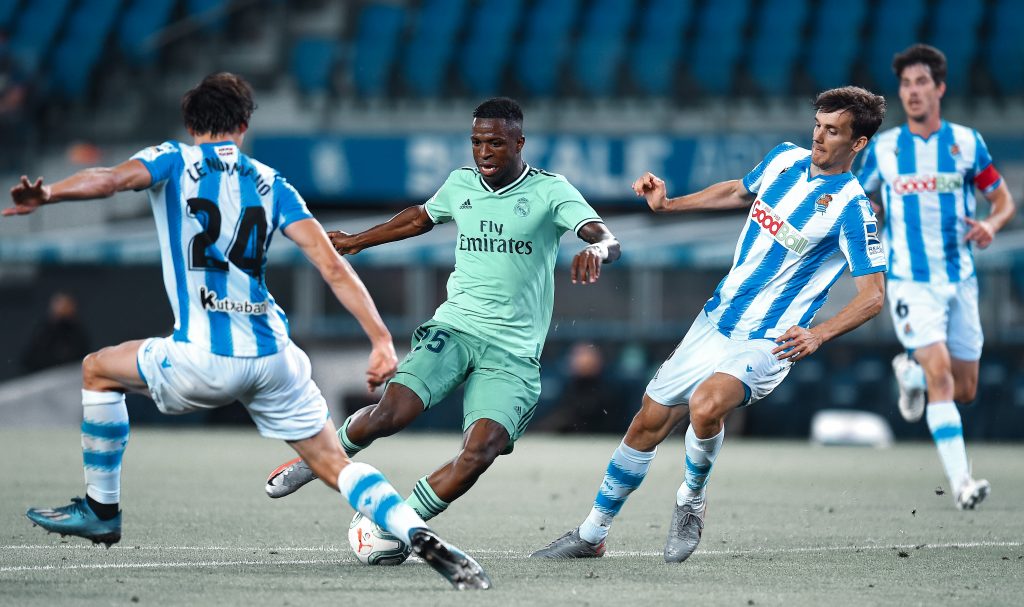 The league we all know and love has set foot in Spain. These past few weeks, the league lacked controversy and La Liga fans have been treated by matchday 30.

Another round of matches in La Liga where football was the centre of attention and, for once, the controversy came into play. Matchday 30 of La Liga was full of brilliant players – again –, magic moments and also controversial calls, as twists and turns came all around the table. La Liga’s return is a triumphant success, especially given the outstanding football at everyone’s disposal. This weekend’s games have all been astonishing and filled with action. However, three have stood out.

Celta Vigo came into this game with only one goal in their last five games, and some of the worst records in the team’s recent history. With the quality of players they have at hand, Celta should not be battling for relegations, and La Liga fans were left wondering what had been happening to Iago Aspas, Rafinha Alcântara and company in the past few weeks. Against Alavés, these players finally showed some life by annihilating their opposition in one of the most one-sided contests of the return.

The Galicians dominated the game from A to Z and scored six times to compensate for their last five games. Iago Aspas made amends with his penalty demons from Real Valladolid by scoring his spot-kick this time. Barça loanee Rafinha showed what he could do by firing in two crackers in Roberto Jiménez’s net in the space of a few seconds.

Ex-Barcelona player Denis Suárez registered two assists as his sublime cross landed on the head of former on-loan Barça centre-back Jeison Murillo, and the other one set up Rafinha for a sublime finish. Nolito marked his return to Vigo with a penalty, after being bought last week as an emergency signing from Sevilla. At last, Santi Mina rounded the mark against a ten-man Alavés side bereft of confidence.

After a draw and a defeat in the past two rounds, Valencia returned to winning ways with what looked like a pretty dominant win. The Valencians scored in the first minute, but Rodrigo Moreno could not catch a break with VAR and disallowed goals. Some could say that the goal should have stood and the Valencia players felt as though the spell was going on as Rodrigo already had a disallowed goal in Madrid a few days ago. But, again, his opener had to be ruled out for offside.

This event did not dishearten Los Che, and Gonçalo Guedes went on to score the goal of the weekend when he erased three defenders with his mazy run and fired one in the top corner. The Valencia players were disgusted at the referee’s behaviour when he used VAR to make sure of a perfectly fine goal – it was clear on Dani Parejo’s face that they were fed up of the technology. A misplaced pass later and Valencia were on the break, and Guedes turned provider to the unlucky Rodrigo, who doubled the lead.

After the goals, Valencia went into sleep mode, and Osasuna were really unlucky not to find a consolation goal at least. After the restart, it was all Osasuna and Valencia did well to see out the lead, as Enric Gallego and Adrián López kept searching for a breach in their defence. It is worth noting that the Basques’ defence sank their chances of getting anything from a game whose second half they dominated. The explosive Pervis Estupiñan, for example, left acres of space on his left side, making errors both in attack and at the back.

If you thought there was some drama concerning VAR at Mestalla, then hop in for a tale of polemic shouts at Anoeta. Real Sociedad come a bit hungover from the break, and they are seeing their top-four chances fall behind their eyes. Against Real Madrid, La Real had an effective plan and played a thorough kind of football as they passed their way through the first half and kept Los Blancos quiet.

In the second half, Real Sociedad couldn’t get the best of their opponents quick enough, and Madrid’s Vinícius Júnior won a debatable penalty after a mesmeric run in the txuri-urdin‘s box. The locals’ centre-back Diego Llorente wasn’t given the benefit of the doubt as it looked like he clattered Vinícius from the back at first, but further replays showed the Brazilian fell a bit easier than usual.

There was controversy at Anoeta, but if Real Madrid are top of the table, it’s thanks to them and Barcelona’s fault | Photo by Juan Manuel Serrano Arce via Getty Images

La Real went for the kill, and Adnan Januzaj thought he had found the equaliser with a neat finish in Thibaut Courtois’s net. The referee considered the offside Mikel Merino was blocking the Belgian keeper’s view and decided to disallow the goal subsequently, a tough pill to swallow for the hosts as they thought they had found a life-saver in their top-four bid.

Real Madrid went the other end, and Federico Valverde worked his magic as Karim Benzema allegedly shouldered the ball and scored in Álex Remiro’s net. This time, VAR did not disallow the goal, even though this was a less controversial call. Still, the Basques tried to salvage a point at least against a tough team and got a consolation from Mikel Merino’s powerful shot that cannoned in off the crossbar. It was hard for the hosts, but Madrid grabbed an all-important win and sit now at the top of the table.

What does matchday 30 mean for Barcelona?

Barcelona’s disappointing goalless draw in Seville meant that the culés prayed for Real Madrid to slip up in against Real Sociedad, but all their praying came in vain. Los Madridistas are now at the top of the table on the head-to-head ruling. The contest for the league title is as tight as ever.

How has the table been affected?

The La Liga table now looks completely different than how it started before matchday 30. As mentioned, Madrid are now first, but many other teams have swapped positions. Vitolo’s winner for Atlético de Madrid against Real Valladolid means the rojiblancos now sit third on head-to-head with Sevilla, with both teams on 52 points.

With a 1–3 win at Cornellà, 11th-placed Levante are much closer to safety while Espanyol return to the bottom position | Photo by Alex Caparros via Getty Images

For Getafe, while standing at fifth, yet another slip-up against Eiber implies that José Bordalas’ team is closer to eight-placed Valencia than fourth-placed Sevilla in the table. Thankfully for them, they can count on Real Sociedad’s poor run of form as they are still fifth while La Real and Villarreal are on the same number of points. For Valencia, Villarreal’s recent run of form means the Yellow Submarine has leapfrogged them and are now in contention for continental football. Albert Celades’ squad have been weak and only have themselves to blame.

Lower down the table, Celta de Vigo breathe finally with their scintillating win and are above Eibar by a point. Mallorca, 18th, are now three points away from safety.

Of course, Gonçalo Guedes’ sublime goal and assist make him one of the best players this weekend as he looked unbeatable at Mestalla on Sunday. For Barça, Nélson Semedo found form and was superb in Seville. The Iñigo’s combined for Athletic Club’s exquisite corner routine as Iñigo Córdoba assisted Iñigo Martínez for an all-important win against Real Betis, who had an in-form Nabil Fekir. The Frenchman won a penalty late in the game, but Sergio Canales inexplicably blasted it out of the stadium. At last, Enis Bardhi’s strike in the bottom corner against Espanyol was Levante’s highlight.

• The underlying issue of possessing money in football