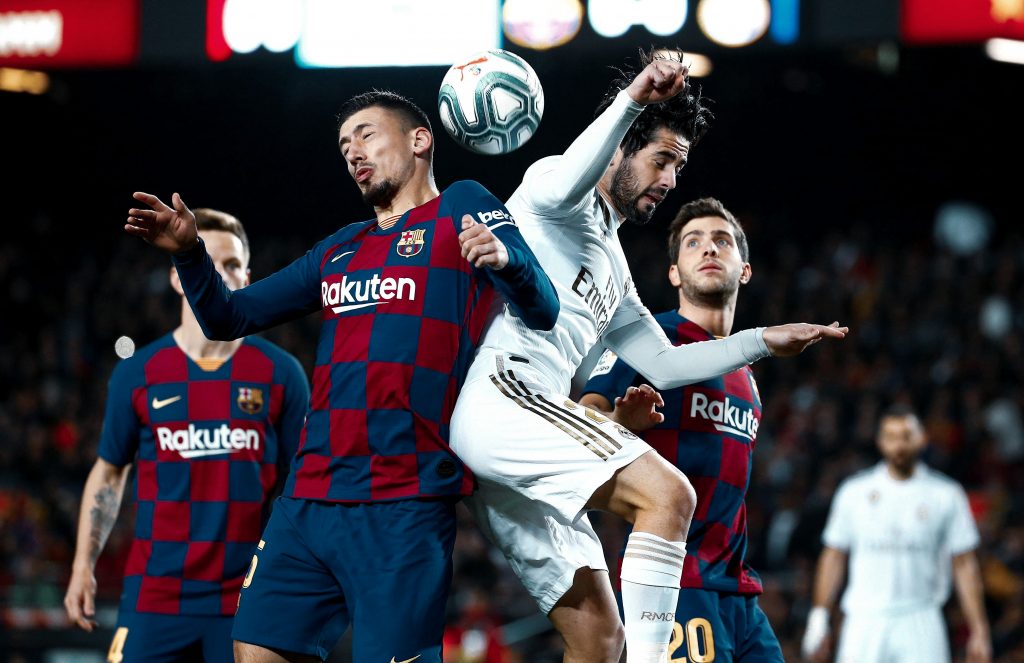 Real Madrid’s 1–0 win over Getafe put a massive gap between the top two. Heading into matchday 34, what are the chances of Quique Setién’s Barça closing the lead and winning La Liga?

The nail-biting La Liga title race that the whole world has been watching seems to be edging in one direction, and it’s not Barcelona. Throughout this season, the top spot saw a massive flip flop and it was hard to decide who would end as the champions of Spain. However, the inconsistency displayed by the blaugranas saw them fall far behind. The standings and results since the restart speak for themselves. The Catalan outfit hasn’t exhibited the form worthy of winning the title.

With several pundits and fans beginning to feel that the title will be heading to Madrid, Barça manager Quique Setién has a massive challenge ahead. To close down a gap of four points within five games especially when Los Blancos don’t look likely to slip up is a huge ask for the azulgranas. But if there’s anybody who can do it, it’s Barcelona. The manager, players, and fans still haven’t given up on the challenge and will look to give their best shot.

Nevertheless, if they are to push Real Madrid to the limit, they must improve on a lot of things. It’s worth noting that Setién should be more worried about his side winning their games rather than hoping the leaders to slip. Right now, nobody can confidently say that Barcelona are fine-tuned to go on a streak of wins. With a trip to an in-form Villarreal, which is pushing for Champions League football next, the fans fear that more points could be dropped.

What has to change?

As stated on numerous occasions, Barcelona just doesn’t seem to have its head in the game. With more off-pitch issues on Antoine Griezmann‘s situation emerging, Setién is being pummeled from all directions. Unfortunately for the tactician, he is in a place where he can’t guarantee 100% focus from the players. With massive uncertainties looming over the camp’s overall obedience to the coach’s instructions, Barça could be in free fall.

Even if the players consider themselves as eligible enough to make whatever decision that pleases them, the ego should be tossed aside. One can surely question the coach on his inability to control the dressing room. Still, we have already seen the ravages of an unhealthy amount of player power even under former manager Ernesto Valverde. The senior footballers continue to hurt the club’s overall development both on and off the pitch.

As Barcelona continue to drop points and Real Madrid to get victories, the chances of the latter winning La Liga increase | Photo by Imago

At the moment, it’s clear that the mishaps in the structure are visible to the fans. The azulgrana loyalists have seen too much of the board and squad’s catastrophes. With the supporters making their dissent loud and clear, the players should understand that this is not a time to fight for power. The challenge that they have ahead is to go toe-to-toe with a highly focussed Real Madrid. The bare minimum that’s needed to compete with Zinedine Zidane’s men is a complete commitment to the cause.

The football hasn’t been poor under Setién. But unfortunately, the fanbase and media outlets seem to be too reactionary to see that. Despite being let down by poor officiating against Atlético de Madrid, the entire blame appears to be on the manager‘s head. As much as one may deny it, the Spaniard’s job is undeservedly on the line. There’s a lack of understanding from a few sections of the club that he was appointed midseason. Some people conveniently forgot the situation the club was in when Quique was hired.

“These are decisions I make and they are technical decisions. They’re not made rashly, and they are done with the best of intentions for the team”

The onus is on the players to respond to the criticism that they are being subjected to. Scapegoating the manager is only a short term fix as their inconsistency is bound to be exposed under any coach. For now, they should look to bounce back against the Yellow Submarines, with the entire focus on getting all three points.

Why is Real Madrid at the top?

One can say for sure that Zinedine Zidane’s determination to win La Liga is what has helped put Barcelona and Quique Setién in danger, as he has turned things around pretty well. The likes of Karim Benzema and Sergio Ramos have been stepping up to lead the team too. Even though Real Madrid’s football hasn’t been dominant, ideal, and flawless, they have managed to get the results needed to stay on top.

Against both RCD Espanyol and Getafe, the defence was wavery, and the attack was below par. Despite them not being in full-throttle, their game-management skills helped them to pick up two 1–0 wins from both games. The players, the coach, and the fans are aware of the fact that in a neck-to-neck title race, nobody sees the style of play. Notably, towards the end of the season, the only thing that the fans would be looking for is their team winning every game.

While the latest wins have not been the flashiest, Real Madrid keep achieving the three points week in and week out | Photo by Gabriel Bouys / AFP via Getty Images

Furthermore, Zidane’s men have taken advantage of Barça’s half-hearted approach to games. They’ve made use of their rival’s off-pitch misfortunes and have ensured that they only remain focussed on the pitch. The numerous problems at the Camp Nou seem to have rattled the entire structure and squad. But at Madrid, there appears to be clarity in the division of labour.

The board works on the administrative proceedings, and the players work on the pitch. There is no mixture of both, and even if there is an amount of player power at Real Madrid, the ultimate control is in Zidane’s hands. Barça should look to emulate this at least till the season ends. They can’t make a comeback if the players keep involving in issues that don’t ease the manager’s work.

Is La Liga over? Mathemetically it isn’t. But emotionally, the people associated with Barcelona are aware that their club isn’t entirely focussed. The performances on the pitch have been inconsistent and unpredictable. So, the judgement based on what’s going on at Barça currently would favour Real Madrid to win the league.

Nonetheless, football continues to be an unpredictable sport. There is a chance for the players to up their game for the coming weeks. Putting pressure on Real is mandatory. The destiny of the title is no longer in their hands, but they can pressure Real Madrid into slipping up by winning their games. For now, Zidane’s men will be watching the situation at Barça and head confidently into their games. So, even if the league isn’t over yet, it could end in Real Madrid’s favour if Barça fails to beat Villarreal.

With five games remaining, Quique Setién should try his best to unite the dressing room and push for a positive finish. Not winning the league might not be the end of the world. A string of good results could boost the team’s confidence before they head for the Champions League in August.

• Iván Rakitić: Why is he always so valued by managers?