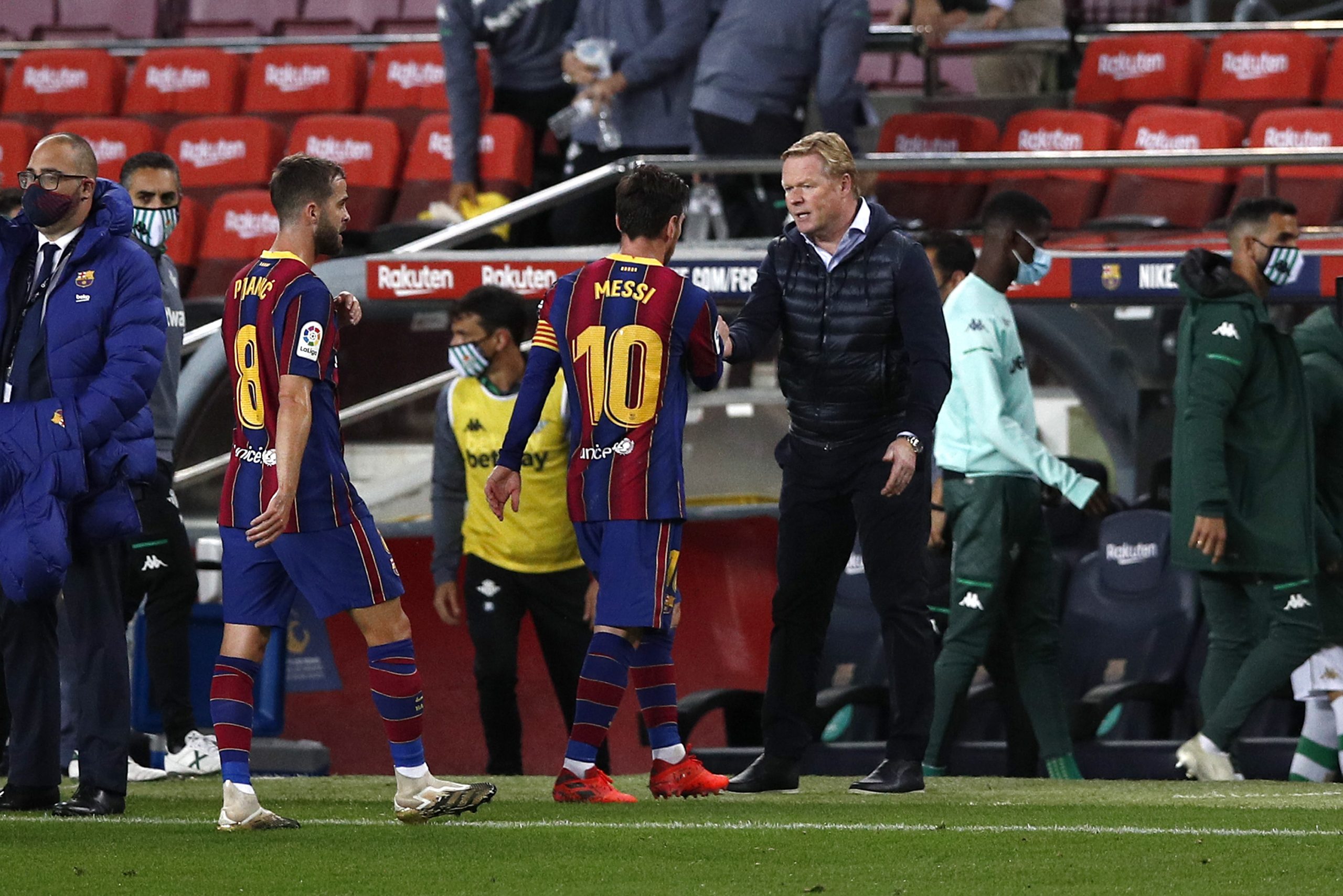 “When I arrived, I was told that Messi was unhappy. I talked to him. He explained his reasons to me and I was honest. I told him that the only thing I could affect was the football on the pitch, his position on the pitch and his importance to the team.”

“Messi has shown to me that he is a person who wants to win things, to be the best and to remain the best despite of his problems with the club.”

“Barça always was and will be a better team with Messi than without him.”

Messi is unhappy at Barcelona and his coach’s start to the season has suffered a bit from it. However, La Pulga always gave his all for the side he captains. Under Koeman, he has been a metronome in the attack while not being at the best of his abilities. On Saturday against Real Betis, Messi showed the world who is boss by scoring twice and completely changing the course of the game. Maybe that’s the turning point of his season.

“Griezmann is working hard. He recently criticized himself. Players can go through such moments of doubt. We can help him find the best version of himself but in the end, it is always in the hands of the player.”

Griezmann being a hard-worker is not rocket science. The Frenchman is one of the squad’s most devoted players, and he tries his best during every game. He makes runs in behind and tries a lot. His finishing is an aspect to improve on but Culés hope to see the 29-year-old’s best self quickly.

“We will miss a good player in Ansu for a while. It is a blow for the team.”

“We have to accept the circumstances of Ansu’s injury. We have to give chances to other players. Let’s hope Fati recovers soon.”

Losing a bright prospect like Fati for four months is a big blow for any team. However, the time out for the youngster might be necessary for the long term. His surgery will prevent Fati from being more injury-prone in the future. Losing one of your top scorers until March however will always be a huge setback for any team. Maybe Koeman can innovate and replace Fati effectively.

“I have said it many times before that we are missing players in certain positions. If there are opportunities, we will try to make the signings, yes.”

“During the summer transfer window, we were pursuing a striker and a centre-back, but no progress was made.”

Here, Koeman is surely hinting at Memphis Depay’s signing. Fati’s injury has propelled the Depay rumours back to life, but Barça aren’t the only club interested: AC Milan will fight to sign the Lyon forward as well. The Catalan giants must act quickly before losing their main man. Other than Depay, Barcelona look like they will sign a former player in Eric Garcia.

The economical situation at Camp Nou is far from ideal. If Koeman wants more players in his squad, he will have to offload others. Moreover, the 57-year-old possesses a big squad, where some players can play a handful of positions. Asking for signings looks a bit petty from the Dutchman’s side:

“Me and my staff often talk about the future, who we can sign and where we need more players, but knowing the economical position of the club, we cannot ask for much.”

“Cruyff taught me a lot of things and details about his experience with football.”

Being coached by late Johann Cruyff himself must have been one of Koeman’s proudest moments. The former Barça coach is a true inspiration to every Culé on the face of the Earth.

Tactically speaking, the 57-year-old has not been convincing enough. His Barça side has found it hard to defend this season and even harder to score their chances. While the finishing improved against Betis, they still conceded twice, and once to ten men:

“If we increase the speed of our game, there will be a few teams that can stop us. But if we lower the speed, our intensity will reduce and we will become a defensively weak team.”

Most Culés must salute Koeman’s honesty, especially concerning Messi. Barça’s start to the season has coincided with a lot of off-pitch events and it has changed the course of the season. If the Dutch manager is given confidence, he could do bits.