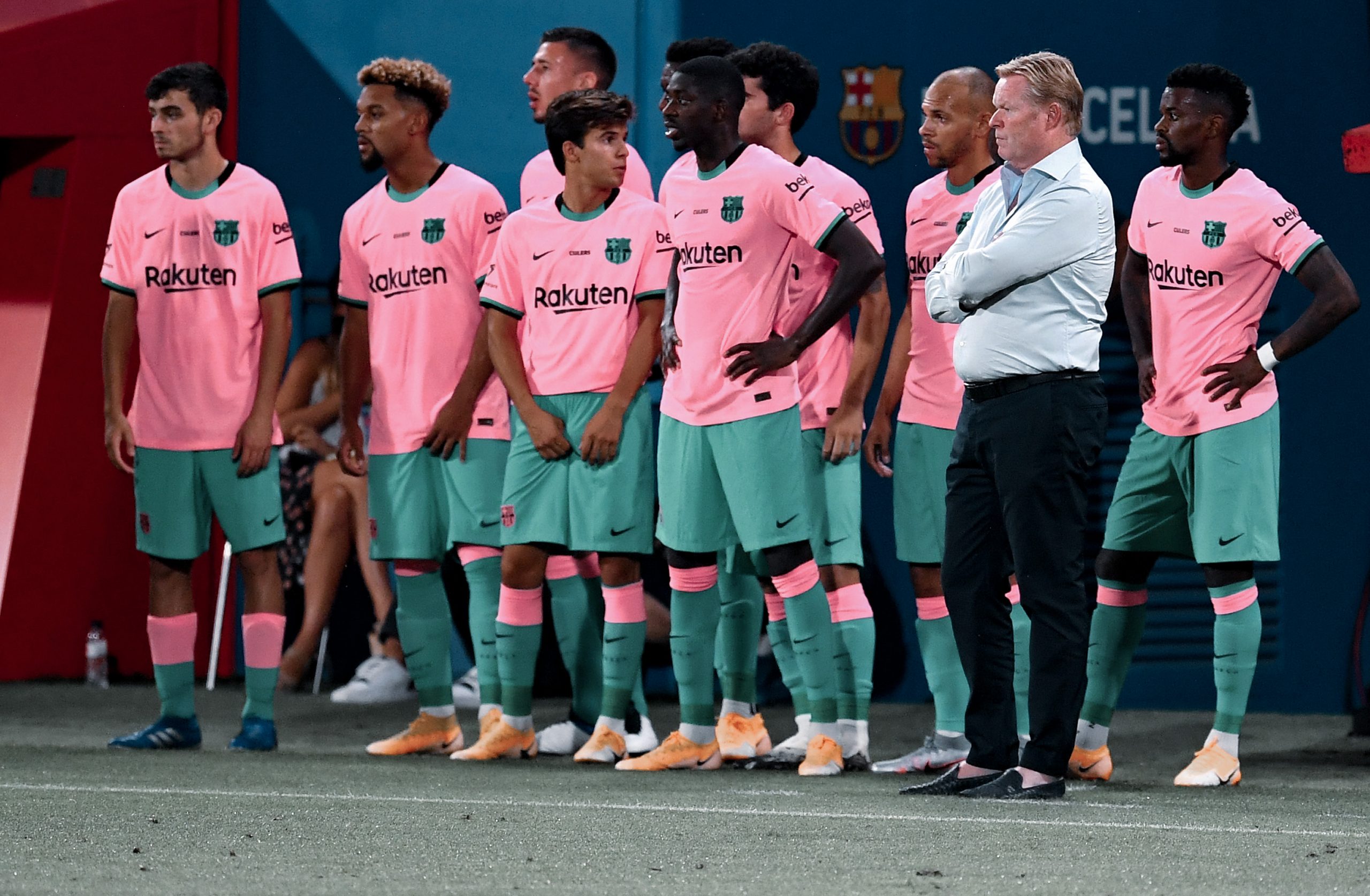 While the whole Europe has started or is approaching to start their respective national campaigns, Ronald Koeman is trying to find the right system to display his force as soon as the La Liga season starts for Barça in about a week. But with the Nàstic and Girona friendlies already on the Dutch manager’s stomach, has he already found the right men to do the job?

As Barcelona’s start of the season finally approach, after the team had more rest days due to the late Champions League ending, it is fair to underline how its newest manager, new coach Ronald Koeman is still trying to find the right notes to complete the symphony. A symphony that is yet to be completed and to be refined, but certainly one that has been quickly asserting the right tracks under its belly.

This year’s preseason has been an unknown for all professional sports out there, with many having to occur in faster, soarer training sessions than usual. While the fitness aspect of it all will probably be the main cause of differences this season, as fitness coaches had to reduce the workloads and increase speed sessions to keep the players fresh and ready, the managers’ job will be much harder in terms of creating the right harmony and cohesion in a short period of time. There is no enough time to practice the desired movements, tactical systems and other structural aspects of a team’s in-pitch organisation.

Barça, apart from an athletic routine that hasn’t much been under scrutiny in recent history due to the club’s different values, had a few more problems to cope with. Lionel Messi‘s transfer saga, the motion of no confidence against president Josep Maria Bartomeu, a new manager, a strange signings strategy – both in and out of the club –, and more. In all the chaos that Barcelona is right now, Koeman’s job has been much harder than what it could have been under normal circumstances. Still, the Dutchman is slowly finding his rhythm with the team.

One of the biggest tactical unknowns of Koeman’s appointment was whether he was going to keep Barça’s vintage 4–3–3 system, or if he was going to change it in a 4–2–3–1, due to his own preferences and the team’s characteristics. After very much debating between fans and pundits, the first two friendlies of Barça’s short preseason gave the environment the answer it was looking for: 4–2–3–1.

While the tactical system is different from the culés‘ traditional one, Koeman’s mentality and footballing ideas are far from being the opposite of Barça’s. Offensive, intense and vertical football are a must for Barcelona’s expectations as much as Koeman’s interpretations. There is a perfect binomial conduction between the club and its new employee.

Football in preseason is as much a test for all the players in a team’s roaster as a training to keep the legs rolling and the lungs filling the air. So were the recent friendlies against Nàstic de Tarragona and Girona. As expected, Koeman literally played eleven different players per half in both games, with a few changes in the last one. And as the coach was varying things and changing the pieces of the puzzle, you could already see the ideas, the movements, the principles that he wanted to give to the team.

As many distressed fans have already noticed, the defence that suffered eight goals against Bayern Munich has not changed a bit. While it may seem discouraging for some, having such individual qualities at the back paired with some solid and correct defensive training may end up being the best signing Barça could do to improve its backline.

With Marc-André ter Stegen on its way back to recovery after surgery, Neto will be the only difference in Barcelona’s defence this season, with lack of competition from the bench arising. At least, as long as Manchester City keeps its firm stand on the Eric García situation and Sergiño Dest doesn’t move to the Camp Nou.

With a proven-to-be two-man midfield in Barça’s new squad, a Koeman favourite will certainly find his place game in, game out: Frenkie de Jong. As the same manager told upon his arrival, it is a shame to watch players like De Jong – and Antoine Griezmann – in unusual positions, as they will not perform at the levels they are expected to.

“The plan is to start playing Frenkie de Jong in the position that he plays with the national team as well. I remember attending a Barcelona game and I saw him play a position where I wouldn’t play him as a coach. You’ve spent a lot of money on a young player. You should then play him in his own position, where he can perform in a way you’d expect from him. He has shown at Ajax and with the Dutch national team which position suits him best and that is where he will be playing at Barcelona as well”

With De Jong‘s place not being threatened by anyone else except himself, it is expected from Riqui Puig and Carles Aleñá to provide that support quality and solutions from the bench or, in some cases, to perform in an eventual three-man midfield, with Puig being hierarchically higher than the former Real Betis loanee.

Next to De Jong is a position that is going to be fought for the whole length of the season: Sergio Busquets’ intelligence or Miralem Pjanić‘s quality? With an ageing Busquets, it will be the first time in twelve years that his place will be under severe scrutiny by the club, as years go by and fresher legs come in place. But while the Bosnian’s quality will be very much needed throughout the entire season, Busquets’ tactical awareness is going to be a solid piece of refinery yet again.

Slowly approaching Barça’s biggest guns, it is no secret that the Catalan’s team offensive overbooking is going to keep several doors open throughout the whole season. Having the freedom of two players per position is a manager’s dream, but while it may be a benefit, it is also a challenge to keep the team balanced and the moods paced.

With the signings of two youngsters such as Francisco Trincão and Pedri, both incredibly bright against Nàstic and Girona, Barcelona’s wide game takes a big jump in terms of volume, youth and creativity. But with Luis Suárez’s mysterious future under supervision, the seniority of Barça’s main man upfront will take its advantage overall. At least initially.

“I liked Trincão positionally, sometimes coming inside and sometimes going outside. He has the quality and has to adapt to the speed and rhythm. He’s a great signing”

Ronald Koeman, on Francisco Trincão after the 3–1 win over Nàstic last Saturday

Apart from Ansu Fati, who is already considered a senior throughout the whole footballing world, Messi and Antoine Griezmann seem to be Koeman’s main men for the central roles up top: as much as they will both exchange their positions, the Argentinian is destined to take the playmaking role, while the French World Cup winner will move around him and try to create spaces and finish chances for the team.

Besides Barça’s business, Philippe Coutinho is another player to have returned to the blaugrana headquarters. Full of determination, he will look to prove himself once and for all where he wanted to be ever since his Liverpool days. With similar motives to the Brazilian’s, but with different sources, Ousmane Dembélé is approaching the start of a defining season for him: either he proves to be world-class or he goes home. And with the explosion of Ansu Fati and the incredible talent he brings to the field, those three may feature in most of Barça’s games in this start of the season. Ansu Fati’s injury permitting, of course. However, Trincão and Pedri’s talents may change many’s minds, Koeman’s included.

“He [Pedri] is a great talent. He’s 17 and such an important signing for our future. He has trained with us and has the quality to play, so we’ll see how much he can take part”

Ronald Koeman is slowly finding the pieces to solve this incredibly difficult puzzle that Barça appears to be. It is going to take more than just a few friendlies and a few good performances to overturn the season’s predictions around Barcelona’s offices. That is why players are tools for a team to perform. You can have better or worse ones. But the mentality and the identity of a team’s way of playing are principles much more important for a club’s success in the pitch.

It is no surprise that, perhaps, the most positive aspect of the new Barça’s performances over the course of the first two friendlies has not been a single player, a chance created or a defensive movement. Instead, it has been the intensity of the team’s ball movement mixed with those two, maximum three, touches per player.

The path to Barcelona’s native brilliance is long and hard, but having the right mindset to attack this jigsaw is the best strategy that the Dutch manager could employ. One idea, 4–2–3–1, eleven optimal choices and the highest intensity possible. Step by step, game after game, Koeman’s Barça will surface. With patience. And, as in microeconomics when supply meets demand, in football, when principles meet practicality, the puzzle is solved.