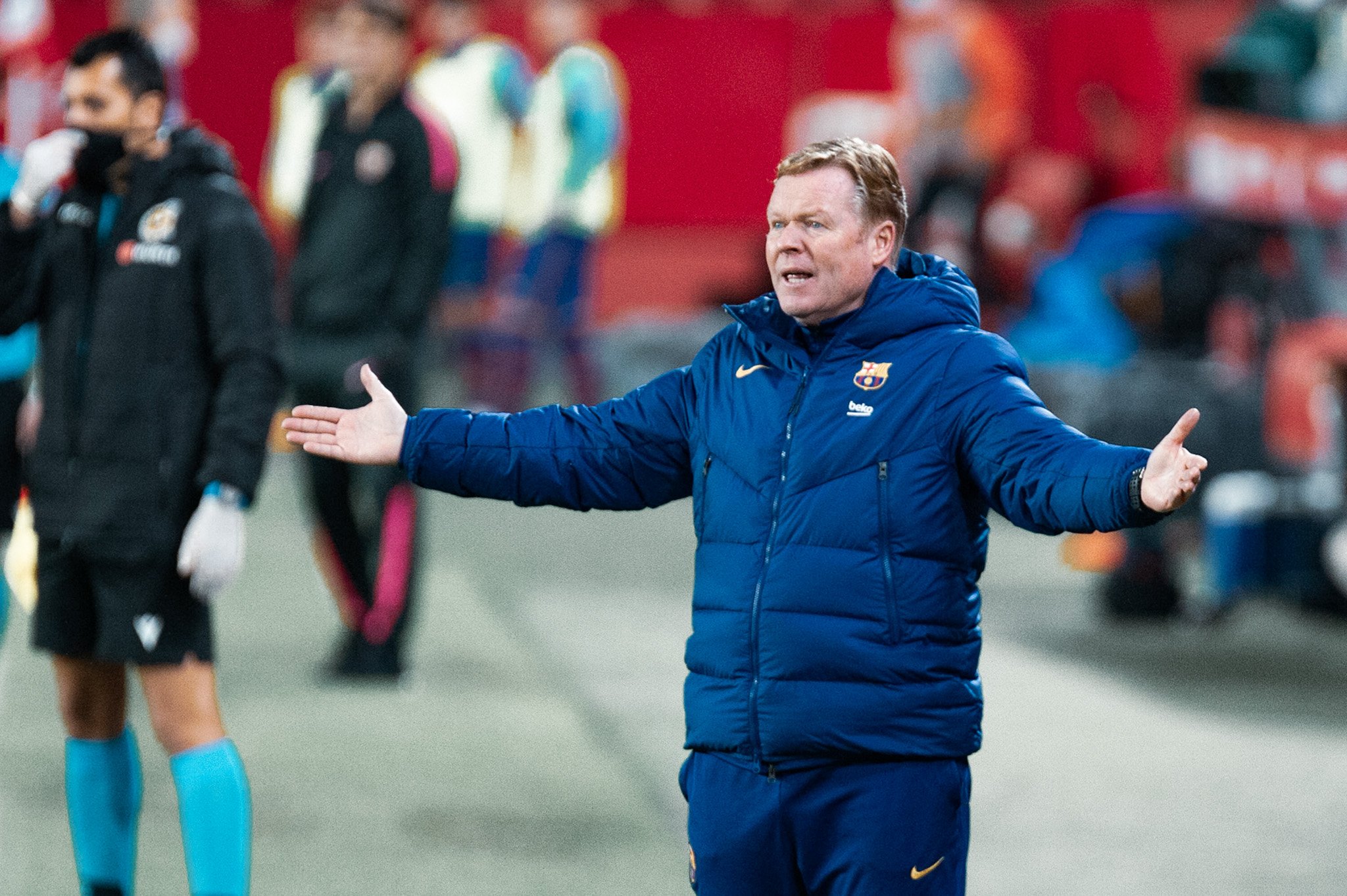 This Saturday Ronald Koeman will get his best chance to end the season on a high note, clinching a trophy in a season everyone described as ‘transitional’ at best. Of course, there’s no such thing when it comes to Barcelona, that much we know.

Whatever the circumstances, the Catalans are somewhat expected to fight on all fronts and not just that but also to win even when the odds are stacked against them. Be that as it may, Saturday night’s Copa del Rey final against Athletic Club will give them a chance at redemption.

Ending the 2020/21 campaign with a piece of silverware in the bag would undeniably give the team a boost for the remainder of the La Liga race as well. As ever, everything is connected and Barça have a shot to silence the critics or die trying.

But 2020/21 was, in so many ways, transitional and experimental. Koeman has been trying out all sorts of different structures, lineups, personnel and tactics, each bringing something unique to the table. Not all were successful, of course, and that poses a question: what kind of a system are we going to see come Saturday night in a be-all, end-all scenario for the Catalans?

Here are three dilemmas the Dutch gaffer needs to resolve ahead of the clash against Ahtletic Club.

Many had predicted that Frenkie de Jong would be the ultimate benefactor of Koeman’s appointment at Barcelona. After all, the two knew each from the Dutch national team and the newly instilled coach had all the tools he needed to make De Jong a pillar of the Catalans’ squad.

Unfortunately, the young midfielder struggled with his reputation, failing to instantly awe and dominate, leading to some questioning his talent. But soon, he would prove them all wrong. Fast forward deep into the 2020/21 season and De Jong is indeed that pillar we were hoping he’d become.

Interestingly enough, Koeman managed to get the best out of his versatility, deploying the Dutchman all over the pitch and alternating between deeper and more advanced roles. In fact, some of his best performances arose from the backline and the resurrected libero position.

When he’s slotting between the centre-backs in a back three, Barcelona can use De Jong’s incredible press resistance and ball-carrying abilities to the fullest. With the whole pitch ahead of him and space to dribble his way through the opposition block, the 23-year-old adds a whole new element to Koeman’s tactics.

His runs also force the other team’s defenders to move out of their position to collapse. This inevitably creates space elsewhere as De Jong’s gravity attracts and then eliminates the oncoming opponents. But with him so deep on the pitch, Barcelona can struggle with midfield overloads quite often.

Establishing control over that central area of the pitch is often key, both for Barcelona’s domination and the opposition’s resistance. This is what can often make or break a game. Not to mention that De Jong’s tendency to make vertical runs into the box and beyond the opposition’s defensive line is somewhat diminished with his deployment in the libero role.

He will still make the runs, of course, but with more risk, seeing how that’s essentially a centre-back moving out of position, forcing his teammates to adjust and cover his absence. Barcelona have never really done well in plugging holes or maintaining solid rest defence, so this is a big question mark heading into the clash.

Both scenarios offer clear advantages but Koeman needs to decide what’s best depending on the opposition. Athletic Club may very well decide to sit deep and counter. In that case, what good will a back three with De Jong do? Saturday night is approaching rapidly and there are still plenty of decisions to be made.

Deploying Ousmane Dembélé as the team’s centre-forward has also been a revelation of sorts from Koeman. Of course, since Barcelona lack a natural no.9 anyway apart from Martin Braithwaite, the coach’s hand was somewhat forced to experiment. But the risk paid off at times.

Against Sevilla, for example, Dembélé’s pace and unpredictability kept the Andalusians’ backline constantly pinned and Barcelona did well to isolate him in 1v1 duels throughout the clash. In those situation, the Frenchman is an incredibly valuable asset to have.

For that reason, it may be tempting to use him there for the Cup final as well. But this choice, as ever, is nowhere near an easy one. After all, it was Real Madrid who showed us this can be a double-edged sword. Should teams decide to defend in a mid-to-low block at all times, Dembélé can easily get suffocated in the ever-crowded centre of the pitch.

The young forward does have the pace and trickery to create space for himself but is often lacking the understanding of some of Barcelona’s key concepts and decision-making. In other words, he will often switch off and simply get bored with the tasks a centre-forward has to do, which are sometimes tedious and completely unselfish despite the reputation of the role making us believe otherwise.

Just like it was the case with De Jong in our previous section, the decision to deploy Dembélé in either of the two positions depends entirely on the opposition. If Barcelona are to face a low block, they may need the Frenchman free to wreak havoc from the wings and give the Catalans’ attack some width.

Should Athletic Club decide to push out and contest the ball, a more direct approach through the central channels could be the way to go. Either way, Koeman will have to make a big decision once again as this could completely change the game for Barcelona and their opposition as well.

The final decision Koeman needs to make concerns Barcelona’s initial shape. We’ve already discussed how formations are only numbers on a piece of paper but they can also dictate players’ roles as well. The defeat at the hands of Real Madrid has highlighted some of the weaknesses this new and improved system has.

Zinedine Zidane opted to draw Barcelona in, relying on transitions and pace to tear their non-existent rest defence apart. After 45 minutes of suffering against a rival who clearly had the recipe for their destruction, Koeman shifted back to a variation of the more traditional 4-3-3 structure, deploying Lionel Messi in the false nine role flanked by two wingers and with more standard full-backs.

This helped Barcelona in nullifying Real Madrid’s counter-attacking threat as they had two extra-wide players to protect the space behind the wingers’ backs, making Los Blancos’ progression that much more difficult in the first place. But that first phase is usually smooth as it is against low-block teams so adding more players deeper makes no sense.

If anything, that revelation shows us the 3-4-3 is excellent against highly aggressive teams that will contest possession and have a somewhat open shape that can be played through. Teams that sit deep, on the other hand, have a good time against that system because it sacrifices superiorities higher up the pitch in favour of a smoother first phase of the build-up play.

Once again, the choice of the general structure depends on what Koeman expects Athletic Club to do. Are they going to sit deep and rely on counters? Or are they going to try and tango with Barcelona, contesting them higher up the pitch?

The answer to that question could potentially answer the initial one – the 3-4-3 or the 4-3-3? Of course, it’s not always as straightforward as that. The 4-3-3 is far more flexible both in attack and in defence but the 3-4-3 gives you tools to press well and retain/ maintain possession. But then again, is it really necessary if the opposition is going to give the ball up anyway?

Whatever Koeman chooses, it may play a big part in Barcelona’s conquest come Saturday night. And we can only hope that he chooses well.