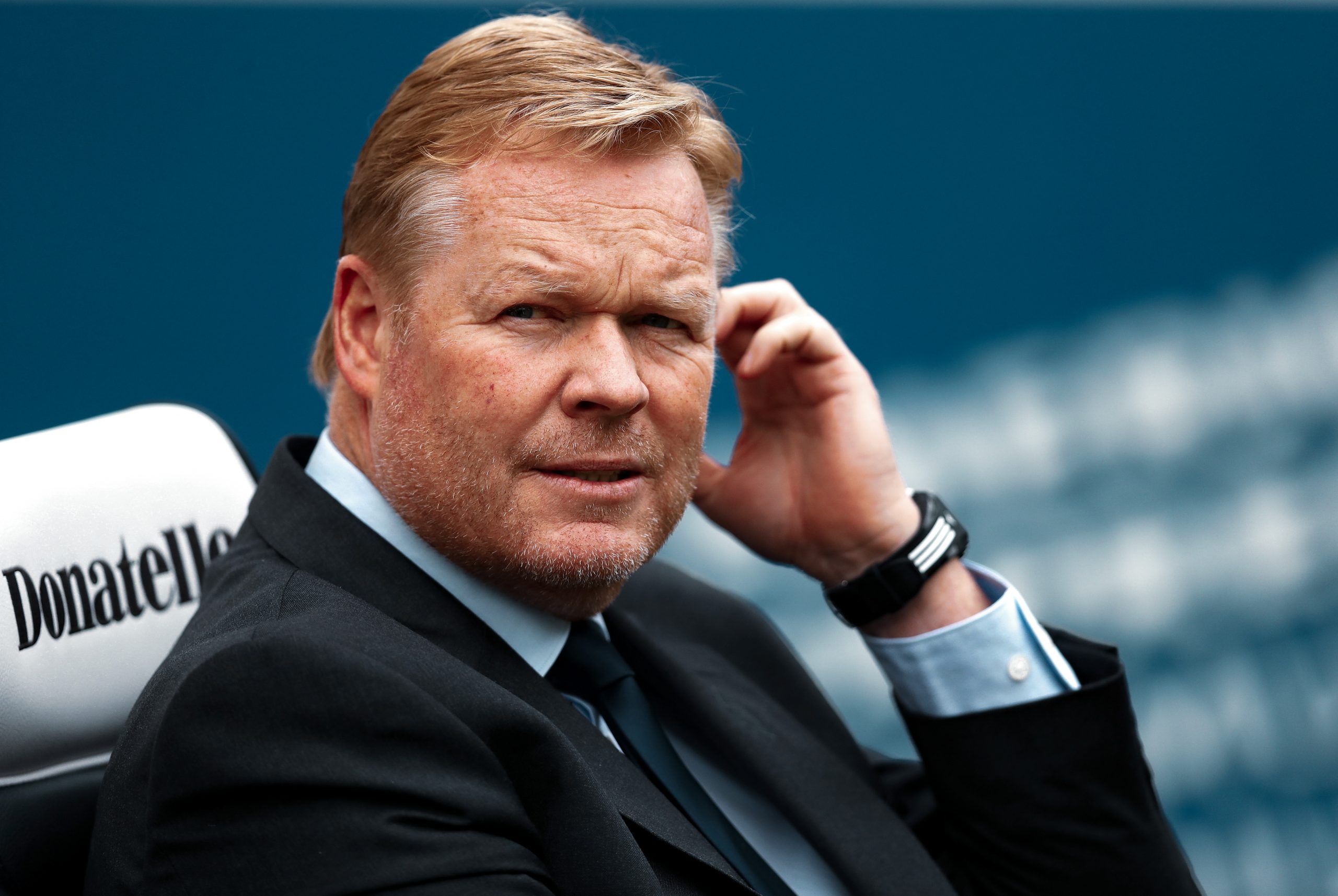 As we review the spells from the new Barcelona coach Ronald Koeman at his former sides Southampton, Everton and the Netherlands, which tactics and team selections can we expect from him?

Barcelona recently appointed Ronald Koeman as the first team manager following the humiliating 2–8 loss against Bayern Munich in the Champions League quarter-finals. This result shook the club down to its core and changes had to be made. Rewind back 20 months and Sergio Busquets had just gifted his jersey to the Betis coach at the time, Quique Setién. On it, he wrote “To Quique with appreciation and admiration for the way you see football. Kind regards”.

Slightly over a year later, Ernesto Valverde was sacked and Quique Setién was named the new Barcelona coach. Despite his relative lack of experience on the European stage, Setién’s Betis side played the kind of football Barcelona should. At the Benito Villamarín, the Santander-born tactician impressed everyone and his appointment as Barcelona’s coach had filled everyone with anticipation as to how good he could make this team.

But, after 25 matches with a 64%-win percentage –– the highest of Setién’s career ––, the Spaniard was sacked by the board and antagonised by a portion of the fans. Koeman is up next. Is this decision by Barcelona a step in the right direction? Or is it a reckless switch for the sake of Koeman’s legacy as a Barça player? And what can we expect from the Dutchman? These are the questions this article will try to answer.

After Mauricio Pochettino was signed by Tottenham after his success, Koeman took over at Southampton. This was not an easy team to manage. They had lost many key players recently. The huge number of footballers departing and the importance they had meant most people expected the team to get relegated. However, Koeman’s smart transfers turned out to prove them wrong. Along with other players, Koeman brought in good balance of directness and technique in Sadio Mané and Dušan Tadić as well. These two would go on to play a significant role in Ronald’s Saints.

At Southampton, Koeman played two formations most often. His favoured 4–2–3–1 and a 4–4–2 diamond. The 4–2–3–1 was a very stable formation under his command. The team set up in a double pivot, where Victor Wanyama played a major part. Apart from building up from the back, the two pivots acted as a reference, and the shape of the group was maintained by their positioning. This required the pivots to be positionally and tactically excellent.

Southampton played out from the back often, but not exclusively. Something that the culés should keep in mind is that the verticality that Pep Guardiola and Luis Enrique employed at Barcelona will most likely not be replicated by Koeman. Koeman’s sides tend to circulate the ball in midfield and patiently wait for openings, a bit similar to Valverde. However, Mané and Tadić often dropped back for the Saints to create passing lanes in midfield, which provided verticality.

Southampton finished in sixth in the Premier League in the 2015/16 season, Koeman’s second at the club | Photo by Adrian Dennis / AFP via Getty Images

Southampton were a patient team under Koeman. Though they had pacey full-backs, the Saints wouldn’t counter often. When without the ball, they allowed the opposition to keep possession near the box. The forwards would look to cut passing lanes but didn’t press often. Still, when the ball reached midfield, the attacking midfielder and the two pivots would start pressing. Koeman looked to win the midfield battle every time, making sure his team would play possession-based football. When the opposition had the ball in the final third, Southampton would be compact and low in defence. The wide midfielders along with the pivots would have significant defensive responsibilities.

These tactics proved to be very successful and Southampton got their highest points tally in the Premier League in their history under the Dutchman. Koeman won multiple Manager of the Month awards, but he would leave for Everton in 2017.

Koeman’s problems started with issues in the transfer market. The former Barça player is the kind of manager who can do well in helping a team reach at least close to its full potential, but he does sign many footballers upon which the campaign relies significantly. At Everton, he was given the largest transfer budget in the club’s history. In the first season with the Dutchman in charge of the Toffees, they finished 7th and the future was promising. Yet Koeman’s troubles at Everton were due to many reasons, but the one we will focus on right now is the transfer market, since his tactical profile will be detailed throughout this article.

Everton sold their top scorer, Romelu Lukaku, to Manchester United. With him gone, the obvious business would be to bring in a replacement. Instead, Koeman brought in Gylfi Sigurðsson, Davy Klaassen and veteran Wayne Rooney. None of these had the profile that Everton needed and the fact that they all used to operate in basically the same space at that time made this a baffling bit of business.

This business was just the backdrop for what was a terrible 17/18 campaign. Within the first nine matches, Everton found themselves in the relegation zone. They were torn apart throughout Koeman’s reign and the supposed Lukaku replacement, Olivier Giroud, was never signed. The team which was previously full of potential and looked to be challenging the big 6 was now one of the most threatened in the league.

Ronald Koeman’s most recent job was also a very successful one. As the manager of the Netherlands, we finally got to see what Everton were hoping from him. The previous manager of the Netherlands, Dick Advocaat, was sacked after the shocking elimination leading to them being unable to qualify for the 2018 FIFA World Cup. This side was an outright mess. There wasn’t enough youth, there were no good, charismatic captains, and the squad selection in itself was questionable.

Ronald Koeman showed his excellent man-management here. He solved the squad-related problems first. Frenkie de Jong, Matthijs De Ligt and Donny Van de Beek were all made important squad members to provide a good assortment of youngsters. Players like Ryan Babel and Memphis Depay, who weren’t given chances under Advocaat, were given plenty of playtime and Virgil van Dijk was appointed as captain. All these subtle yet important things added up to a dressing room which was very close to an ideal one.

In terms of tactics, the Netherlands were a refined version of all that Koeman had employed in his previous jobs. Primarily, they operated in a 4–3–3 asymmetrical formation and sometimes a 4–2–3–1. The full-backs would always move up the field while De Jong and Martin de Roon would make cover the space behind them when needed.

Again showing how much Koeman’s double-pivot system was integral to what he desired from his team, De Jong and De Roon were given plenty of responsibility. De Jong often dropped back to receive the ball and use his dribbling or passing to move it up the field. De Roon would move into the right side of midfield and provide a passing option for the right winger and right-back.

In terms of defending, the team would employ a mix of man-marking and zonal marking. The forwards would look to cut passing lanes but press when the ball was closer to midfield. De Jong and De Roon were instructed to man-mark the opposition. This did cause problems when the opposition let players drop into midfield, but the team would become very compact when defending. The attacking midfielder and the striker would form the front two in a 4–4–2. This would be a compact low or mid block. However, the first order of action when the ball was lost was to counter-press.

Under Koeman, the Netherlands were very good at pressing, especially looking to do this down the wings, and apart from this they were very energetic in winning second balls. In the build-up, Frenkie was instrumental. But when his dropping back wasn’t enough, De Roon would drop back to form triangles with the central defenders of the full-backs.

What does the future hold for Koeman at Barcelona?

In the 1988 Euros, Rinus Michels chose Hendrie Kruzen and Wilbert Suvrijn in the Dutch squad. They were chosen for their positive energy and the influence they had on the dressing room. Hence, without even touching the ball, they returned home with the gold medal. Koeman reportedly recalls this story often. That¡s because he knows just how important man-management is. In a squad such as Barcelona’s, Koeman will need to employ the best of his man-management skills as well as his tactical expertise.

It seems most likely that Koeman will employ a formation similar to the Netherlands at Barcelona. He has already emphasised at playing players in their natural position and the importance of having a good and happy squad. So it’s only natural to expect him to play Frenkie de Jong in his natural position as one of the two pivots. Though Sergio Busquets is ageing, it seems like he will be the second pivot alternating with Miralem Pjanić. If not, Sergi Roberto seems to be the next best option.

“You have spent a lot of money on a young player, then you should play him in his own position, where he can deliver his best performance”

Koeman’s defenders need to be solid and fast. Gerard Piqué will retain his spot, along with Clément Lenglet. Nonetheless, Nélson Semedo may not be good enough positionally for Koeman’s demands. He does have the directness that a full-back under the Dutchman should have, so he might stay, but he is certainly not a player we might see if Koeman stays for more than one or two seasons at the Camp Nou. Down the left, Jordi Alba would have to do better to track back and also be more direct. These attributes are something that he lacks, so a replacement might be needed.

The set-up upfront will heavily depend, of course, on Lionel Messi’s future and whether he ends up leaving, as reports expect. If he stayed, in a 4–2–3–1, Messi, Antoine Griezmann, Ansu Fati and Ousmane Dembélé would most likely have the starting spots with Luis Suárez most probably departing. If Messi did leave, Philippe Coutinho could be a starter in his return from his loan at Bayern Munich, and Griezmann could then be the spearhead, always being central.

“He is not a traditional winger, so you have to play him in his own position, in a role that suits him and where he can show his skills”

In the scenario that Messi stays, as we have seen down the right with the Dutch team Koeman could use the Argentinian to drift inwards to basically play Semedo as an attacking wing-back for Barcelona. Griezmann would most likely have the role Memphis Depay did, playing as a striker but very often dropping back and creating with two inverted wingers on either side. The positioning of Griezmann and Messi would be interesting to see.

All in all, Koeman looks like a better choice to lead this team than it may have seemed. Though his type of football won’t be the type most fans will be expecting, Koeman’s man-management and robust tactics should mean that Barcelona will be a better side under him than under Quique Setién. One thing to watch out for is, who will Koeman sign for his Barcelona project? The transfers could make or break this season, like they did with Everton. From the rumours circulating currently, it does seem like the transfers will be quite sensible and young. If the transfer business goes about decently, it seems like Barça could yet again be a force to reckon with sooner than most think.