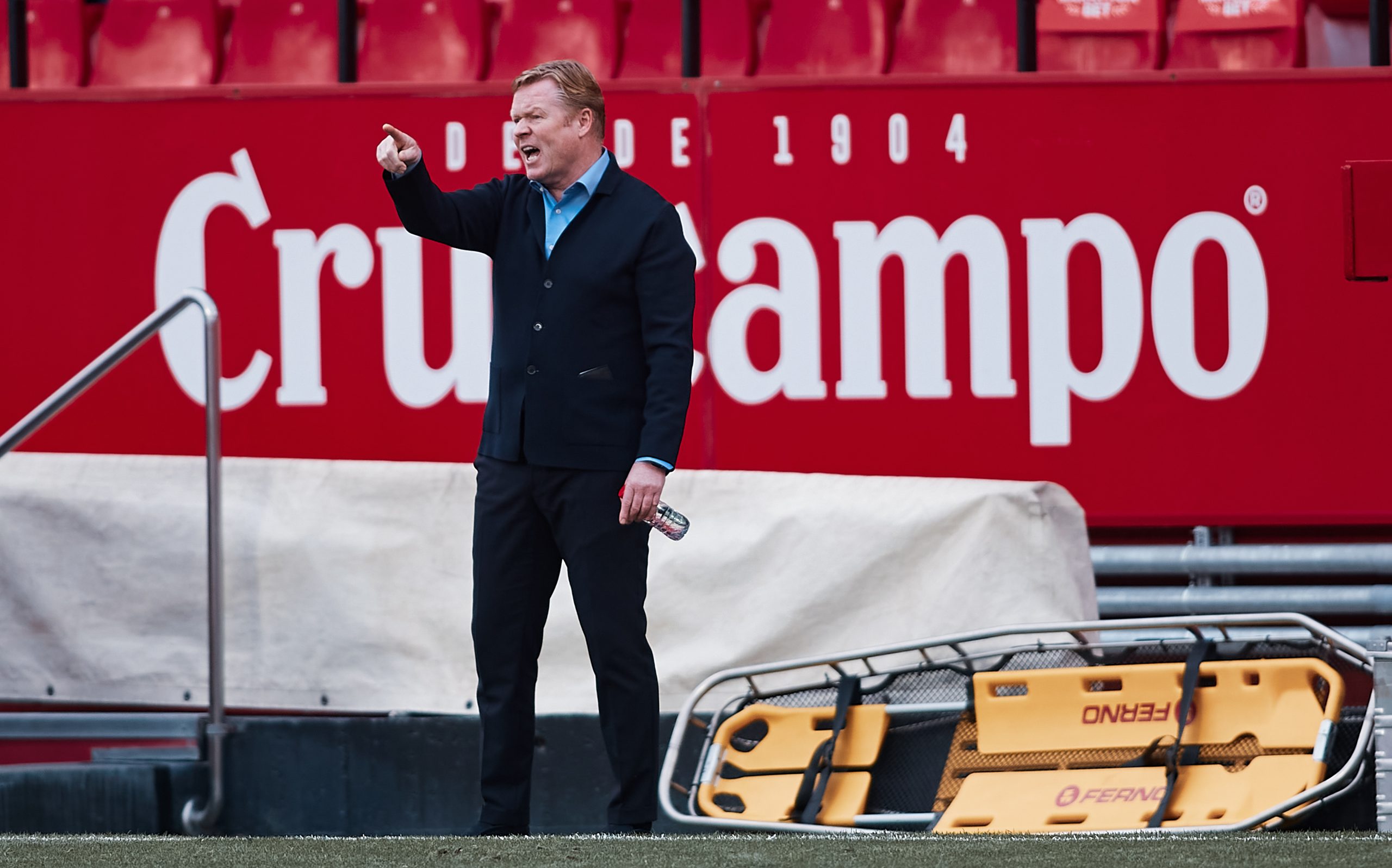 Credit and criticism should each be given where both are due. With Ronald Koeman, however, there has been a considerably larger share of one than there has the other, and to such a point, it seems unjustifiable.

To call the Dutch manager out for late substitutions or perhaps incomprehensible tactics is perfectly fair. The line is drawn when one decides to pretend as though all he had done was turn gold to dust. He has had to undergo a panoply of trials and tribulations, many of which are unheard of among Europe’s elite.

In this article, Barca Universal explores the revitalisation of Barça’s mentality, Koeman’s underrated improvements to Barcelona, his adaptability to diverse situations and why he should be given more time to implement his ideas.

Barcelona’s feeble mentality on big occasions has often been a subject of great torment to their supporters. Once at the helm of Europe’s elite, the element of nostalgia is a tough one for their avid supporters to rid themselves of. They long a return to the greatness they once held onto so tightly, though perhaps irrationally.

The Garnet and Blue are stacked with dextrous individuals full to the brim with the zeal and zest that comes with youth. While optimal for future successes, these individuals are years away from achieving the rank of world-class. Nevertheless, Ronald Koeman has had to instil, both in them and the veterans that have run the big stage so long, his ferocious attitude and never-go-die mentality.

As Warren Buffet once said that “No matter how great the talent or efforts, good things take time.” Rome wasn’t built in a day, and it would be completely unrealistic to expect that the Catalans’ wounded spirits be completely healed just a few months following several consecutive European annihilations.

Ever since the turn of the year, the Catalans have shown a palpable increase in their self-belief, and such is illustrated by their four comeback victories this season. The most remarkable of the quad was that against Granada in the Copa Del Rey. Down by two goals and in desperate need of a dramatic comeback, the Azulgranas broke loose from the jaws of defeat, recording one of their most enthralling victories of the season.

There are, of course, times when Barça have stumbled, and one need not look any further than a fortnight ago, where Barcelona had their wounds from yesteryear brutally reopened by a rampant PSG side. No one ever said that the path to recovery would be an easy one, but it is clear that Ronald Koeman’s mentality is rubbing off onto his players and is steadily developing a profound resonance with them.

Following arguably their best performance in what seems like aeons against Sevilla two nights ago, Gerard Piqué had this to say:

“We can fight for the league, for sure. Today we dominated Sevilla, they didn’t create us chances, we played in their half…I trust this team a lot, let’s hope we can achieve something big. If we manage to turn the tie around on Wednesday, the season completely changes.”

The competitive attitude is building up gradually, rising to a crescendo that simply can’t be matched and sooner or later, it’ll culminate in a trophy of some sort.

As has been said before, to brush off all that Ronald Koeman has done to improve the team and solely focus on the negatives would be nothing short of peddling a narrative. The ex-Valencia boss has seen an unprecedented change to his fortunes, and it would only be just to acknowledge them.

In his book ‘Pep Confidential‘, Josep ‘Pep’ Guardiola said that “Titles are won in the last 8 games but are lost in the first 8.”

Drawing parallels to Barcelona this season, their opening eight matches were horrendous, to say the least. As former champions, one would surely expect form better than just three victories in that period, but such was Barça’s tactical ineptitude that they did just that, losing to all three of their rivals from Madrid.

What many refuse, or rather fail to recognize, is the level of improvement that has taken place since. From the 21st of November, when they succumbed to defeat against Atlético de Madrid, the Catalans have gone on to win 42 points from 17 matches played, thirteen of which were won while they dropped points through three draws as well as the damning defeat to Cádiz.

In those seventeen matches, they have the highest points tally of any La Liga side, with Sevilla coming closest at 35 points from 51. They also bulged their opponents’ nets a whopping 40 times, twelve more than nearest rivals Los Colchoneros.

They incurred the least defeats and conceded the third least number of goals, all numbers which, when compounded with the statistics from the first eight games, dissipate and present a much worse image of Barcelona right now compared to how their current form would suggest.

It is also worth mentioning that all this has been accomplished with a team lacking both in quality and personnel in certain departments of the pitch. Both Clément Lenglet and Samuel Umtiti have been victims of their own abhorrent and detestable form. In contrast, Gerard Piqué and Ronald Araújo have each succumbed to injuries at crucial points of the campaign. In the forward line, the ex-Oranje manager had often had to deal with the reprehensible inconsistency in both form and finishing of his star players, including Lionel Messi being far from his best in front of the goal.

Much of Koeman’s work has been blatantly overlooked, much of this without taking into account the context behind his failures and turning a blind eye to each of his successes. The situation, in general, is far from ideal, but he has skillfully manoeuvred his way through the worst of scenarios without an inkling of gratitude. Seems rather harsh, does it not?

In this department, Koeman has possibly had as many plaudits as he does critics. His detractors will shed light on the multifarious managerial and tactical errors that he has made, and with great reason. At certain points, over the course of the campaign, he showed a crude level of incompetence, particularly in matches against tougher opposition, where he has recorded just but two victories against last season’s top 6 teams.

Doing the same thing and expecting different results is the epitome of insanity, and when offered the opportunity to atone for his errors, he has objectively been laudable.

One could point towards his quickfire matches against Athletic Club in January, where following a damning defeat in the Spanish Super Cup final, he immediately made up for the result, restricting the Basque side to just 0.21xG in a 2-1 victory.

Another more recent example is his iconic victory over Sevilla this past weekend. Having tasted defeat against Los Nervionenses just three weeks back, he restructured his side in accordance to his opponents, switched up his tactics to suit his own, and drastically shifted gears in terms of his team’s pressing. The result was the deliverance of a tactical masterclass against one of the division’s best tacticians, and this too away from home.

When it came to injuries, which are quite possibly a manager’s worst nightmare, he has on plenty of occasions illustrated his flexibility. On the back of Gerard Piqué’s four-month layoff subsequent to his injury in the Wanda Metropolitano, Koeman successfully integrated his namesake Ronald Araújo into the side and with tender care, like a potter with the softest of clay, moulded him into one of La Liga’s best centre-backs.

He did the same with Oscar Mingueza, who, up until his arrival into the first team, was even struggling for minutes in the B team. He is now not only a reliable figure in central defence, but he has also seen an unprecedented evolution into the right-back role. There be offers a starkly contrasting dynamic to the role that Sergiño Dest plays, and so much so that it coincided in him gaining far more relevance to the first team than he would have ever dreamed of.

In terms of the team’s shape, given his now complete understanding of the team, he has been proven capable of altering it from time to time and to great success. The 4-2-3-1 is proprietarily his formation, though rather than place such a hefty burden on the players with a setup they were completely novel too, he tweaked the shape to mimic Barca’s famed 4-3-3, and this perhaps was the key to him winning as many points as he did from November.

In perhaps the riskiest tactical switch one could fathom, his shift to a metamorphic 3-5-2 formation won him the game against Sevilla in the Pizjuan, a victory which to Barcelona’s demanding supporters was long overdue.

Could Frank Rijkaard’s past be his future?

When talking about Ronald Koeman, it is almost a taboo topic amongst Culés to speak of any future that does not involve him being sacked in the summer. Him remaining depends not only on how well he does for the rest of the season but also on the outcome of the presidential elections in a week’s time.

There are many parallels that can be drawn between Koeman’s Barça and that of Frank Rijkaard back in 2003. Both managers came into the campaign on the back of an immensely disappointing season, in an election year, and with teams that were more-less in the making rather than they were finished products.

The starts to both managers’ seasons were almost identical too. The pair had periods in the campaign where they seemed more like relegation candidates than they did title favourites. For the former, such was the state of the club that at one point during the campaign, they were a whopping eighteen points behind Real Madrid.

Around the halfway point of the campaign, much like with Koeman, his fortunes changed for the better, with his football flowing ever so freely. Come season’s end, Rijkaard’s side finished as runners up to Valencia, and more remarkably two points ahead of Real Madrid in third.

Unlike Ernesto Valverde and Quique Setién, Koeman’s ideal version of Barça has been witnessed on plenty of occasions. There are obvious limitations to what he, unlike Rijkaard with his big signings, was able to do. The Blaugranas‘ financial situation prevented him from acquiring around 80% of his intended transfer targets.

Given how well he’s done with limited resources and historic precedence from his Dutch counterpart showing the potential to go from strength to strength, how much more could he do with added reinforcements to one of the most talented young squads in Europe?

In Rijkaard’s second and third years at the club, he both reclaimed the long lost league title and defended whilst winning only the club’s second Champions League title to mark an era of his own at the club. The current Barça might not be able to win either this year, but under Koeman, they can take advantage of the sheer uniqueness of this season to lay the groundwork for the next. The youth the Garnet and Blue possess, both in the first and in Garcia Pimienta’s B team, is more than enough to assure them competitiveness both domestically and in Europe.

In 2003, Joan Laporta had Koeman in his three-man shortlist for the Barça managerial role, and — assuming he wins — the Dutchman’s presence now makes this seem all the more like a match made in heaven. Should he be granted the chance to form his own squad from scratch, under an entirely new regime, he could be admired as a Barça legend not only in his playing days but also in his managerial career.

Barça’s rebirth is inevitable, but it will certainly take time to be achieved. Provided the necessary tools to succeed, Koeman could, in fact, do this, but it will depend entirely on whether or not he is given the opportunity to.