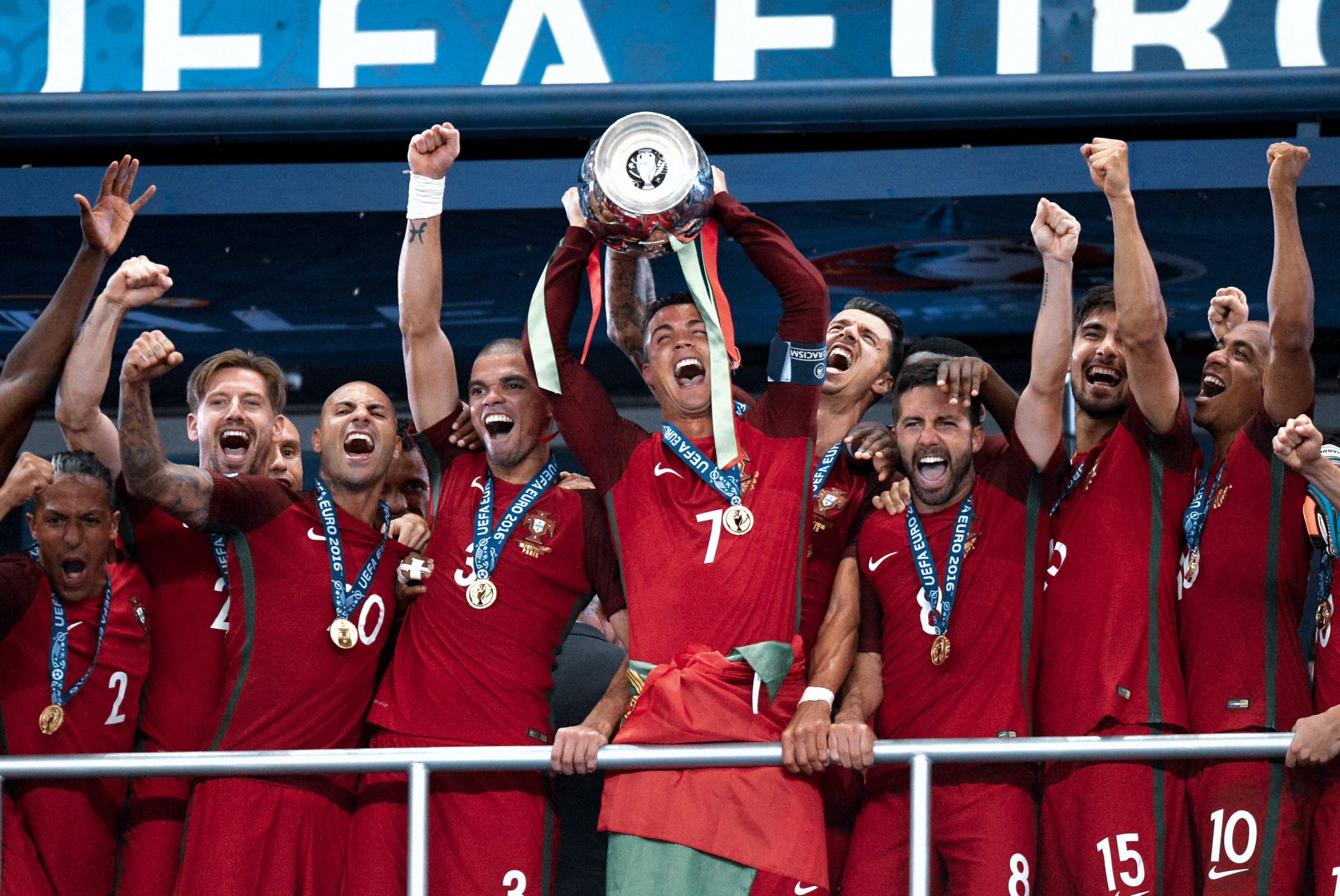 As the club competition calls curtains, Barça Universal takes a look at the eight favourites for the European Championship set to take place this month, starting from defending champs Portugal.

As Portugal enters the delayed Euro 2020, they will be dreaming big again. They are not just the defending champions but have improved leaps and bounds in the five years since. Usually labelled as dark horses, this time, one could make a solid case for backing the Selecao to go all the way, and defend their crown.

Under manager Fernando Santos, Portugal looked to be on their way out of the Euros in the previous edition until a rule change, allowing four teams placed 3rd to go through, saw them make their way to the knockouts.

Once they did reach the knockouts, they ground their way through, with only one of the wins coming within 90 minutes. While many would say luck was on their side, one should also appreciate their defensive solidity throughout the tournament. The whole knockout phase saw Portugal concede just once – to Poland.

Favourites France, who also reached the final, conceded five in the knockout phase. This defensive discipline has been the base for Fernando Santos to build on since. In their previous ten games, Portugal has conceded just five goals – a testament to their continued defensive solidity still.

Moreover, Portugal has improved on their squad in the five years since the previous Euros. Players like Joao Cancelo, Bernardo Silva, Bruno Fernandes, Ruben Dias, and Diogo Jota have come up since their triumph in 2016 and have clearly given the Selecao a major boost. It is therefore not a surprise that their label has changed from underdogs to one of the favourites.

Santos switched up between a 4-4-2 and a 4-3-3 during qualifications but has, by and large, stuck to a 4-3-3 in recent matches. Therefore it is expected that this trend will be preserved.

Santos has gone with the infamous trend of international managers sticking to the big guns. Star player Cristiano Ronaldo has had yet another magnificent season on an individual level despite a disappointing campaign for Juventus as a team, and therefore he is an automatic selection. Players like Bruno Fernandes, Ruben Dias, Joao Cancelo, and Jose Fonte are coming off stellar seasons so there are no concerns regarding their starting positions.

Rui Patricio and Joao Moutinho are important to Santos due to their experience. Therefore it is expected that manager Santos will continue to trust them. In recent matches, Danilo Pereira has replaced William Carvalho as the first-choice for the defensive midfield role, so it would be no surprise to see that continue.

Moreover, Diogo Jota has been given the nod over Joao Felix due to the difference in recent form between the two attackers, and therefore that is expected to continue as well. Raphael Guerreiro is a constant attaching presence and is expected to take the left-back spot, while Bernardo Silva’s incredible energy and work rate earn him the role as the right-winger.

While most players continue to keep their places, two changes could be made to the expected XI in an attempt to improve it. Andre Silva should start over Diogo Jota, whereas Sergio Oliveira should get a chance over Joao Moutinho.

Simply put, the Frankfurt man’s form is too good to ignore. In 36 matches played, Silva has scored 30 goals and has assisted nine times this season. His competition, Joao Felix, has played 46 matches and has managed 16 goals and 3 assists.

While Liverpool forward Jota is an excellent option as well, it is a tight call in which Silva just pips him. Their roles certainly vary, but the output between the two can be considered as a differentiator.

Moreover, Jota is more of a natural winger than Ronaldo, occupying wide spaces that left-back Guerreiro would love to operate in. Ronaldo could look to be the target in the box instead while Guerreiro’s creative prowess can be put to best use.

The left-wing space already has an excellent creative source, and what the Selecao might need is another goal-scoring presence, especially if teams look to mark Ronaldo out.

One of Andre Silva’s major strengths is his effective link-up play. This would allow Ronaldo to play as a poacher, drifting constantly inwards, and Silva to play the role of a “deep lying forward”.

The striker’s pace and movement in and around the box mean he is a great threat in transitions as well. Moreover, Andre Silva starting could also allow Santos to switch up to a 4-4-2 diamond, with Bernardo Silva at the tip. All this, coupled with his form, means he could prove to be a more effective asset as compared to his contemporaries Jota and Felix.

While Joao Moutinho is an experienced campaigner, the performances Sergio Oliveira has put up for Porto are sensational. The 28-year-old has been one of the key players for Porto this season, playing an important role in knocking Ronaldo’s Juventus out of the Champions League.

While Wolves players Moutinho and Neves have a robust defensive side to their game, Oliveira doesn’t. However, with Danilo Pereira or William Carvalho screening, it is more important to look at the creativity the midfielder brings to the table. Oliveira possesses the ability to play line-breaking passes from deep, and the vision to complement that ability.

Moreover, the 28-year-old is also a threat from direct free-kicks, with his goal against Juventus standing testament to the same. Oliveira is coming off his best goal-scoring season, with 13 goals in the league, including six from open play. Safe to say, as an attacking threat, Oliveira is a better asset than Moutinho and Neves and, therefore, should be getting the stub over them. With Ronaldo and the likes in front, his technical ability would be the best for the Selecao.

One of the greatest players of our generation, Cristiano Ronaldo, at the age of 36 continues to defy limits. The Portuguese forward comes off yet another record-breaking season which saw him score 36 goals and assist nine times. Ronaldo is indeed a national hero in Portugal, and therefore it is no surprise that the spotlight continues to follow him.

Over the years, a lot about his game has changed but one thing that has been a definite is his ability to goal scores. Right foot, left foot, heading – the Portuguese has got it all. His presence in the box continues to be the main issue for opposition defenders. It is clear that Santos can rely on the Juventus man to come through for the Selecao once again.

While it was often the case that Ronaldo was the man Portugal built their team around, new arrivals like Bernardo Silva and Bruno Fernandes over the past few years mean there is a little less pressure on the star man to deliver. Ronaldo can be assured he will be provided with enough assistance to add to his 101 goals for the national side, and in the process, provide the firepower Portugal needs to defend their crown.

When Manchester City signed Ruben Dias from Benfica, it was looked at as a wasteful signing. The English club had already signed Nathan Ake from Bournemouth and had Aymeric Laporte and John Stones at the club. What would the Portuguese man bring more to the table than these existing players?

Well, what he did bring was absolutely magnificent. In the 32 matches that Ruben Dias has started for City in the league, they have managed to keep 15 clean sheets. The Portuguese centre-back averages 0.70 tackles won per 90, 0.91 interceptions per 90, 3.60 clearances per 90, and a total of only 1 error leading to goal all season. With Dias in the side, City has looked a much more solid side defensively – a key factor that has led to them winning the Premier League title once more.

Alongside the experienced Jose Fonte, who is also coming off a great season with Lille, Dias forms a partnership that is extremely hard to beat. Santos is heavily reliant on his defence doing well, and Dias’s performances ensure that Portugal is well protected. This builds the base for the talented attackers ahead of him to perform. Portugal’s previous Euro victory came due to their defensive solidity, and if they are to continue on the same trodden path, Dias will be one of the most important players for the Selecao.

Manchester United’s fortunes have turned ever since they have signed their star attacking midfielder. The charisma and confidence the Portuguese brought to the club were simply unmatched. Bruno has 18 goals and 12 assists in the Premier League this season, a sum total of goals and assists second only to Tottenham’s Harry Kane.

Only four players created 100+ chances across a top-five European division, Champions League and Europa League in 2020/21:

In Santos’s setup, Bruno Fernandes plays a deeper role, but that does not hinder his creative ability. In the UEFA Nations League, the midfielder managed 19 chances created along with 18 key passes in just 6 matches. This creativity does not mean he lacks defensively – Fernandes looks to give his all whenever he plays, pressing relentlessly and hardly ever looking tired. His fitness levels have been great, meaning Ole Gunnar Solskjaer could trust him to start multiple games in a short span of time – and so can Fernando Santos. If Portugal is to defend the Euros crown, it is no doubt that Fernandes will be playing a key role in their campaign.

What Portugal has now is not just a great XI. They have incredible depth in each position. Earlier, one could say they were heavily reliant on Cristiano Ronaldo’s scoring prowess, but now even without the elite forward they could have their pick from the cherry tree with Diogo Jota, Joao Felix, and Andre Silva among the mix.

In midfield, they have options like Ruben Neves and William Carvalho, who are currently not starters, and in defence, they have veteran Pepe on the sidelines. It is safe to say this is one of the best Portugal squads to enter the European Championship – and therefore, it is no surprise that many believe the Selecao could very well defend their crown.

All things considered, Portugal should reach the semis. Their group is tough with the likes of France and Germany there as well, but they should be able to make it out over Germany considering their current stature. Moreover, the dearth of talent would only keep them behind England and France in terms of depth.

Santos’s insistence on defensive solidity combined with the attacking firepower possessed by them should mean that Portugal has a good campaign. All in all, it would be interesting to see how far they can go, considering they go in as a much better team than their previous campaign.