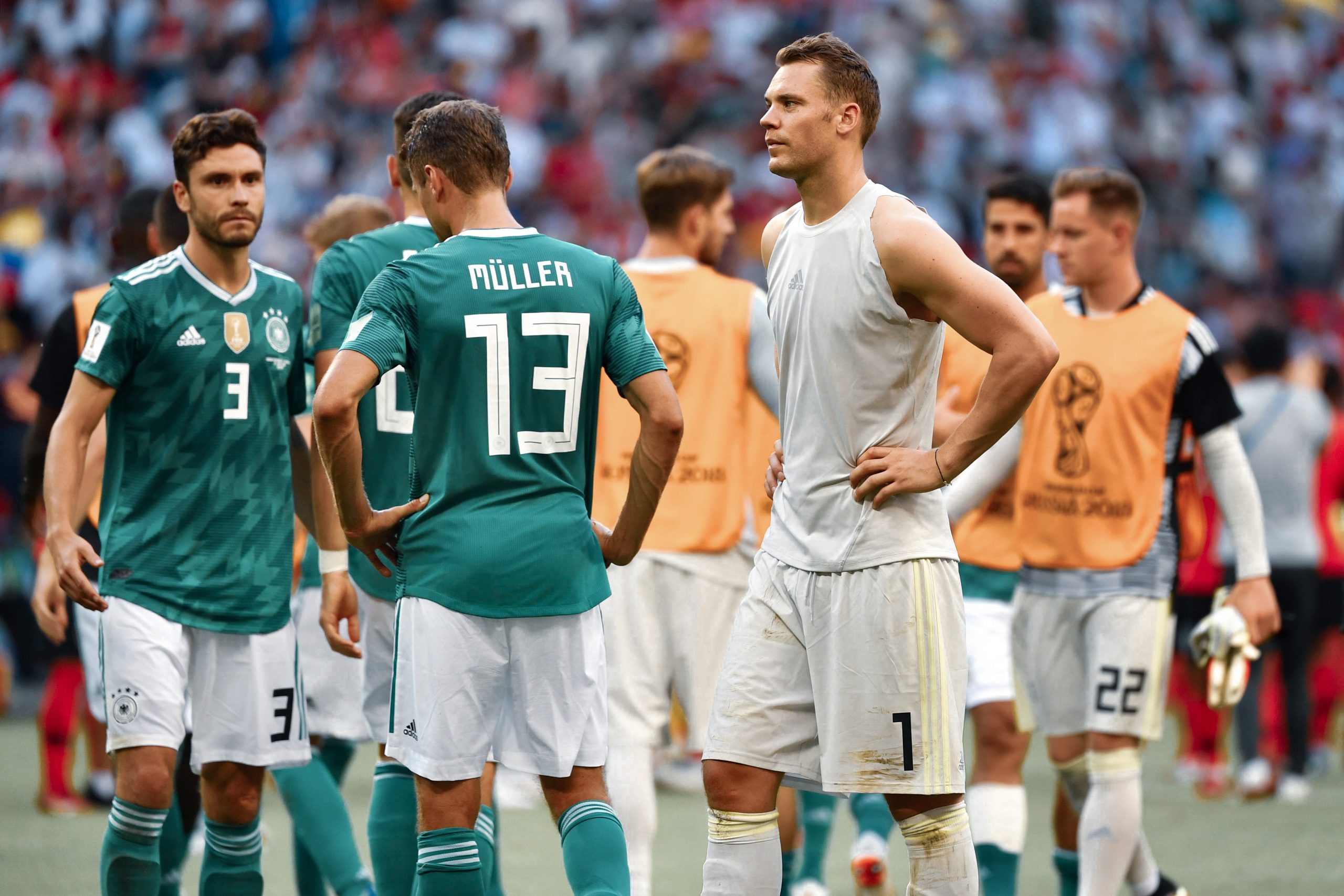 Bereft of any European glory for the worst part of the last 25 years, Joachim Low’s German outfit will be in the search for continental silverware in the 16th edition of the UEFA European Championship. 2016’s semifinalists find themselves in a group with World and European champions France and Portugal, respectively, in what has unanimously been dubbed the group of death.

Ever since their world triumph back in 2014, Germany have been a pale shadow of their former selves. Two years subsequent to their win in Brazil, Die Mannschaft had a rather unconvincing show in the UEFA European Championship. They struggled against a considerably weak Italian side in the quarter finals, one scrapping a victory via a penalty shoot-out after 120 minutes of play. In the semis, hosts and finalists France produced a tactical masterclass, overcoming the World champions in a triumphant 2-0 win.

The Confederations Cup served as a source of hope for the men in white and black. Through a perfect blend of youth and experience, Low moulded a championship-winning side that should have marked a return of national pride, but fate had something else in store. Their title defence at the 2018 FIFA World Cup was as shambolic as one could fathom.

A defeat to Mexico on their first game was atoned by a victory against Sweden on the second matchday. Needing a victory to see themselves through to the round of sixteen, Low’s forces succumbed to arguably the biggest shock defeat of the entire tournament; a 0-2 loss to South Korea.

Some conspiracy theorists would attribute blame of their steep fall from grace to the so-called ‘champions curse’, but cracks were seen as early as the group stages of the previous edition, which rather than be fixed, we simply papered over, led to their inevitable demise.

In the group stages of the last two editions of the UEFA Nations League, Germany showed many of the same mistakes. Their lack of sophistication and their sluggishness both in attack and defence meant that they would fall victim to damning defeats to France, Ronald Koeman’s Netherlands side (only winning one in four), and in a thumping for the ages, Germany suffered a 6-0 annihilation at the hands of Spain.

On the third matchday of World Cup qualification, they befell yet another humiliating defeat, this time to North Macedonia, and on home soil no less.

This comes as a shock as nothing about the German team should accommodate such failures. They easily have one of Europe’s most talented and dextrous squads, boast some of the continent’s most innovative managers — with each of the last 3 Champions League-winning coaches coming from there. To consistently fail in such ways leaves much to be expected in Euros, especially in such a tough group.

A notable change from the German setup of old, the 4-2-3-1, is the shift to the three-man backline. This dynamic setup allows for dominance in the final third of the pitch, exploiting the talents of the returning Thomas Muller and up and coming players such as Timo Werner, Kai Havertz and Leroy Sané.

This setup has been implemented in all but three of Germany’s last 11 fixtures, leading us at Barça Universal to think that this is indeed how they’ll play.

Bereft of any true number 9, Germany will have Timo Werner and Leroy Sané on either side of Muller down in the middle. The Bayern legend has reiterated his desire to play down the center as he has for most of his Bayern career, owing to his offensive exploits in the zone.

His ability to understand space has come in handy, particularly over the last two seasons, as he has racked up a bizarre 39 assists in the span of the last two Bundesliga seasons. As such, Low had to take back his initial decision to forcefully retire Muller from the national team.

In the midfield, the more mouthwatering duo of Joshua Kimmich and Toni Kroos will coordinate the play. The Real Madrid man has an eagle’s eye when it comes to creating chances out of nothing, and his partner is as dextrous in the pivot role as he is versatile in other areas. The dynamism in this duo is certain to cause France and Portugal some issues in the middle of the park.

Rounding up the setup is the defensive trio of Matthias Ginter, Mats Hummels and Niklas Süle, with Robin Gosens and Lukas Klostermann acting as wingbacks. Hummels, much like Muller, was recalled after being given the same treatment. He enjoyed an impressive season with Borussia Dortmund as one of the best defenders in the league.

Meanwhile, Gosens was inarguably one of the best left-backs/wingbacks in Europe, playing his part in a blistering Atalanta attack with an incredible 11 goal and six assist in the league. The 26-year-old gets into scoring positions often, which will be useful given the finishing problems suffered by almost all of Germany’s strike forces.

The goal is kept guard by the ever secure gloves of Manuel Neuer. The Bayern shot-stopper comes off the back of a sextuple winning year with his club and will hope to add to his tally of the season with a European triumph with his beloved Germany.

Talking of German shot-stoppers, Barcelona’s Marc-Andre ter Stegen does not make the cut for the squad after pulling himself out of contention owing to an operation on his knee.

Another possible variation of the line up could see the setup below.

Kai and Muller impeccable spatial awareness both on and off the ball would be the left complement to a goal-hungry Gnabry in the final third. The duo is well-known for getting into goalscoring positions unmarked, which is bound to hurt any of their opponents. Additionally, Gosens crossing will complement Havertz, especially, who stands at 6’4″ and regularly wins aerial duels with ease.

This is certainly a more attacking variation of the team, and the presence of Ilkay Gundogan confirms the same. The Manchester City midfielder loves to join the attack and just completed a fantastic season with the club, being nominated for the PFA Player of the Year award and taking his place in the PFA Team of the Year.

In transition, this structure could represent a highly disjointed 3-1-3-3, with the wingbacks on either side of the box, while Havertz and Muller try to attack the box by making late runs. Gundo, too, can drop to just outside the final third, hoping to get on the end of loose balls and crosses.

Naturally, this variation is vary prone to counter attacks and should only be used when push comes to shove. The presence of Nicolas Sule, though, represents a fairly quick player with incredible strength, which can help Die Mannschaft to tie up loose ends.

Few to keep an eye on

On the back of yet another remarkable individual season for Real Madrid, Toni Kroos is more than ready to set the Euros ablaze. The model midfielder, Kroos, can lacerate defences, unlocking spaces no one could even fathom seeing. His unpredictability makes him an infinitely useful asset to any side, as his passing range knows no bounds. He is just about as lethal from his own half as he is at finding space to attack in the final third of the pitch.

His adaptability to a variety of situations, be it as a deep-lying playmaker or an attacker in the final third, means that should a rival bat an eye when marking him, they will have themselves punished severely. His inventiveness and eye for a key pass had him leading Los Blancos’ assist charts with 9 this season. Definitely, one to watch in the German squad.

Some players are specialists, others are generalists. With Joshua Kimmich, you get a specialist in football. Reigning supreme with his otherworldly intelligence, Bayern’s brain incarnate is more than ready to expand his expansive and near-complete trophy haul — at just 26 — in the continental stage with his national team.

His reading of the game is sublime and so are all his actions playing it. Scanning the field before playing a pass, the German number 6 calculates every lethal attacking option in his mind before destabilising his opponents. Ten assists in 27 apperances for Bayern in the league, Kimmich creates at a rate of a tremendous 2.5 key passes per game.

His sheer versatility means that regardless of his positioning be it in the defensive, middle or attacking third, Kimmich has the ability to annihilate his rivals. His pinpoint accuracy and wondrous technique are enough to distill any technical ideas into football brilliance on the pitch. The artist without a brush, Joshua Kimmich is another to monitor in the Euros.

Following his international exile from the German national team, Thomas Muller is back and ready to make up for lost time. With the former European champions, he has garnered up 39 assists and 18 goals for the Bundesliga Giants in the last two seasons alone. A testament to his sheer brilliance on the ball.

Timing, precision, patterns brilliance. All these, and more, characterize the Bavarian’s technical ability for club and country. As the self-dubbed Raumdeuter, or space interpreter in English, his timeless skill and composure on and off the ball make him an imminent threat for opposition defences. His firm understanding of his defenders, as seen innumerable times in the Bundesliga and in the Champions League, means that any pocket of space vacated by the opposition is one begging to be feasted on by the 10-time German league winner. Keep an eye out for him.

Where does Low bow down this time?

Germany come into the Euros as a mixed bunch. The quality of the team warrants a title opportunity, but the opposition they face makes the chances of this rather slim. Structural deficiencies have hampered this side for quite some time now and any remnants of the same could spell the end for Die Mannschaft.

The toughness of the group might suggest a possible third-place finish, but depending on their performance, they could make it into the Round of 16 by virtue of the new format. Even then, this side is capable but might not make it very far. That said, their midfield boasts of ridiculous talent, which could alone push them all the way. However, the quarters, or at max, semis is a safe bet.