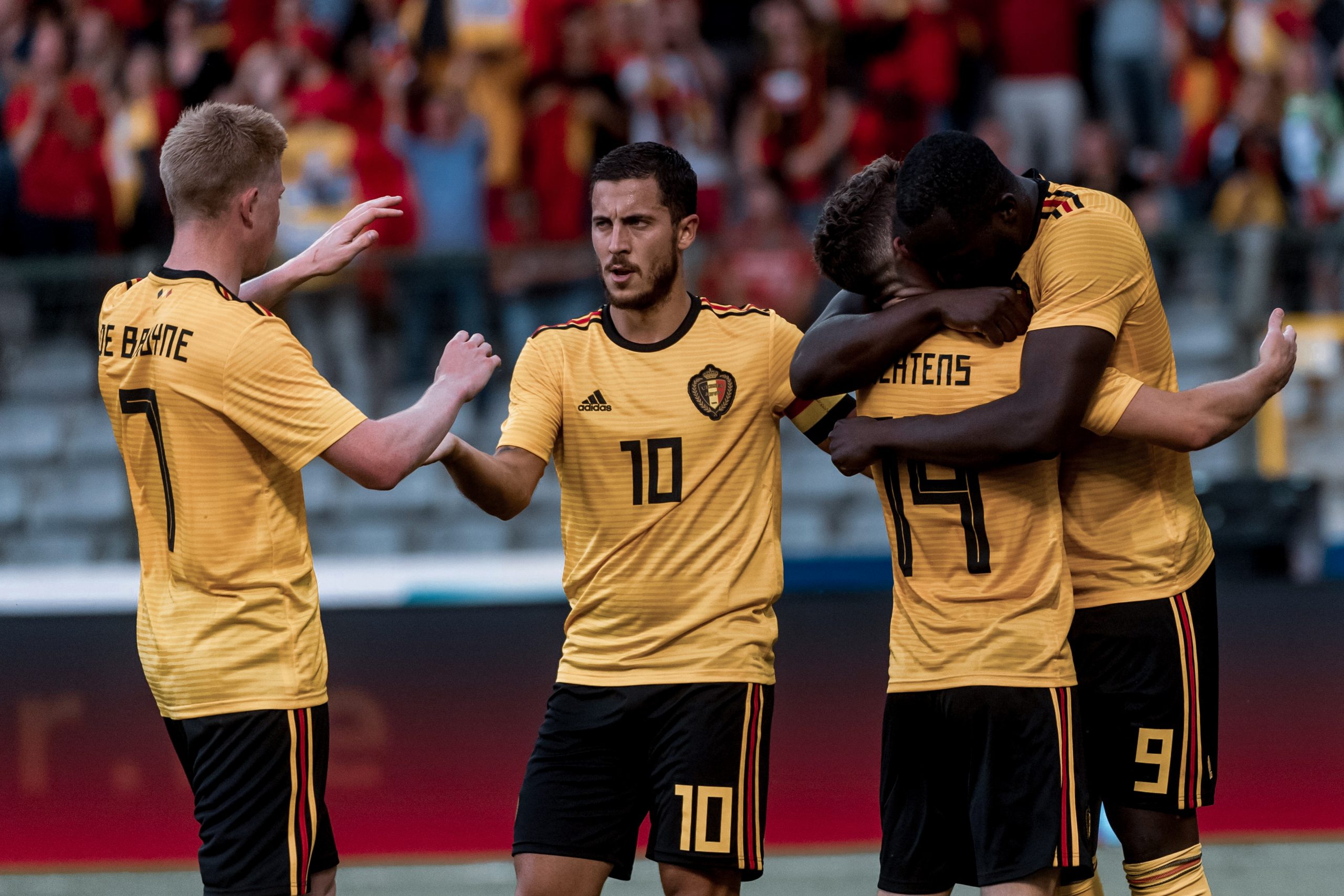 Nested proudly amongst three of west Europe’s finest footballing giants is a small, almost landlocked nation that claims to be better than them all. England lies to its North-west, France to its south and Germany to its east, all countries that boast of possessing Europe’s finest footballing leagues. Yet, standing proudly at the apex of FIFA’s world rankings is Belgium, a side that can take down even the strongest of sides on its day.

A ‘Golden Generation’ refers to a group of world-class players in the team whose greatness has never been witnessed in history nor will be replicated in the future of a team. Who can forget that golden generation of Spain that lifted the World Cup in 2010? The AC Milan of the mid-2000s and the Barcelona side of 2009-2012 are just a few other such golden teams.

Belgium currently boasts of a Golden Generation, which unfortunately is yet to taste glory. In Eden Hazard, Kevin de Bruyne, Thibaut Courtois, Romelu Lukaku, Dries Mertens, Toby Alderweireld, Jan Vertonghen, Yannick Carrasco, Youri Tielemans and others, the side boasts of some of the most gifted players in the world.

The 2018 World Cup was one of the first events the side entered with its players in their prime. Despite their valiant efforts, Belgium fell to a tough fought 1-0 defeat against eventual champions France. However, they outplayed England in the third-place battle, finishing third in the World Cup.

Age is the biggest bane in football. With many of them being in the latter halves of their career, the creme-de-la-creme of Belgian football has only around two more events in their prime. Other than next years World Cup, the upcoming Euros provide them with their best chance of tasting glory as a team.

It goes without saying. The quality in this Belgium side is one very few others can boast of. Understandably, they head into every tournament amongst the top favourites. The Euros are no different.

Roberto Martinez took over the reins of the red devils in 2016, after the Euros. Five years after their quarter-final exit, he leads them back to the Euros, albeit in a renewed form. The Spanish manager revamped the style of play and has found his trump card in a three-man defence system. Martinez has proved to be an extremely competent and underrated manager, one capable of leading De Rode Duivels to silverware.

In defence, the wingbacks often drop deep to assist the central defenders. The resultant 5-4-1 or 5-3-2 formation is capable of choking even the most potent of attacks. Jan Vertonghen, Toby Alderweireld, and Dedryk Boyata were the first choice centre-backs in the World Cup. However, with all three in their thirties now, the usually impervious defence could start leaking. Ideally, young Jason Denayer would start ahead of Boyata and run the central defence. Nevertheless, the CB situation is a potential concern.

The wingbacks have traditionally been the fulcrum of the Belgian side. If history is any indicator, Thomas Meunier and Yannick Carrasco would start at the right and left wing-back positions. Thorgan Hazard provides a valuable option as a wing-back too given his history in that position for the national team.

In attack, they act as agile wingers to stretch and open up defences. Crosses into the centre have often been the way to go, however, recent games have also seen more hold up play and dribbling to break defensive lines.

In midfield, Alex Witsel’s inclusion in the squad took many by surprise. While Witsel has time and time again proved his quality, he has been frozen out of action for a considerable time via injury. His last game was over four months ago. Despite being a usual starter for his national team, lack of match fitness could see him drop to a second-fiddle role. Nevertheless, Martinez still has a very tightly contested midfield.

In Youri Tielemans, Leander Dendoncker, Nacer Chadli and Timothy Castagne, he is spoilt for choice. While Kevin de Bruyne is head and shoulders above the rest in midfield, there is a real possibility for him to start in a front three.

The sheer quality in the red devils’ attack is ridiculous. Eden Hazard, Kevin de Bruyne, Romelu Lukaku and Dries Mertens are amongst footballs elite. Add to that a bench with Jeremy Doku, Christian Benteke and Michy Batshuayi — there is no dearth for quality.

Romelu Lukaku has been Serie A’s best player this season and will be one of the key men in his sides Euro campaign. Roberto Martinez has alternated between a two and a three-man attack in the past. Heading into the tournament, a three-man attack seems to be the right step. Eden Hazard to the left and de Bruyne to the right of the Internazionale striker would form a deadly trio.

With attacking wingbacks on their sides, Hazard and de Bruyne can drift inwards and attack the half-spaces instead of staying wide. In Dries Mertens and Jeremy Doku, they have enough quality on the flanks to bring on or alter when needed.

Based on squad depth alone, Belgium makes a strong case to lift the trophy in July. However, take nothing away from Roberto Martinez. The Spaniard has proven to be tactically sharp has always kept his side fresh. Though he has been at the receiving end of criticism for defence, his side’s attack has attracted lauds from across the globe.

Thibaut Courtois in goal is a no-brainer for the Red Devils. He has been in stupendous form for Real Madrid, and will look to carry his form into the Euros. Dropping Dedryk Boyata for the younger Jason Denayer will help pump energy into the tired and old defence. Alongside the Lyon man, the experience of Alderweireld and Vertonghen will be valuable.

Thomas Meunier has had a sub-par season, and benching the Dortmund star for Thorgan Hazard may pay off for Roberto Martinez. Though Hazard is traditionally a left-winger, playing him as the right wing-back may be a gamble worth taking.

After all, Carrasco comes into the tournament off the back of a stellar campaign for Atletico Madrid. With the Atleti man and Thorgan as the wingbacks, the other two in midfield will have to be defensive options. That said, Tielemans and Dendocker seem the perfect duo given Witsel lack of game-time.

In attack, Romelu Lukaku will start as the No.9. He will undoubtedly be assisted by the services of Kevin de Bruyne to his right. However, given Eden Hazard’s poor fitness record and lack of much playing time this season for Real Madrid, Dries Mertens might be a better option to start. The Napoli winger could provide impact up to the hour mark, after which a substitution for the captain could ensure a more conservative use of Hazard.

It is hard to pick a marquee player in a side that boasts of some of the biggest names in football. Moreover so when it includes the star player of a possible treble-winning club in Kevin de Bruyne. However, Romelu Lukaku could be the most decisive factor in Belgium’s campaign, putting him in the spotlight a little more than others.

Since his move from Manchester United, the Belgian striker has been on fire. In the process of steering Inter Milan to the Scudetto, Lukaku netted 23 goals and 11 assists, ending up with the Serie A MVP award. Arriving at the Euro’s in red hot form, Lukaku will be under more pressure to deliver.

Despite the red devils’ star-studded attack, Lukaku will remain the man outlet for goals. He is the all-time top scorer in Belgium’s history with 59 goals, which sounds even more bizarre given his age — 28.

His physicality makes him a daunting presence in the box, yet his surprising speed and agility catch oppositions unguarded. While he will find himself at the receiving end of magical passes from the likes of De Bruyne, Lukaku will also be the target man for crosses from the wingbacks. His importance in the 3-4-3 setup is a highly dynamic one. Rest assured, a successful campaign for Lukaku can guarantee a strong finish for Belgium.

Silverware for the golden gen?

Usually, a golden generation as the one Belgium boast of would find itself as the favourite. Without question, Belgium have the quality, depth and managerial experience on the sidelines to go all the way. However, this year’s competition also boasts of some of the strongest competitors for Martinez’s side. With a red hot France side, defending champs Portugal, and an English team with astounding depth, Belgium finds itself pushed down to third in the bookies’ list.

Nevertheless, relief from the favourites tag can only make them stronger. With less pressure on their shoulders, they will be able to bring out the best in themselves. While a semi-final knockout wouldn’t be the worst result, one knows that they are worthy of tasting glory. All in all, this golden generation should make the finals, possibly even win it all.