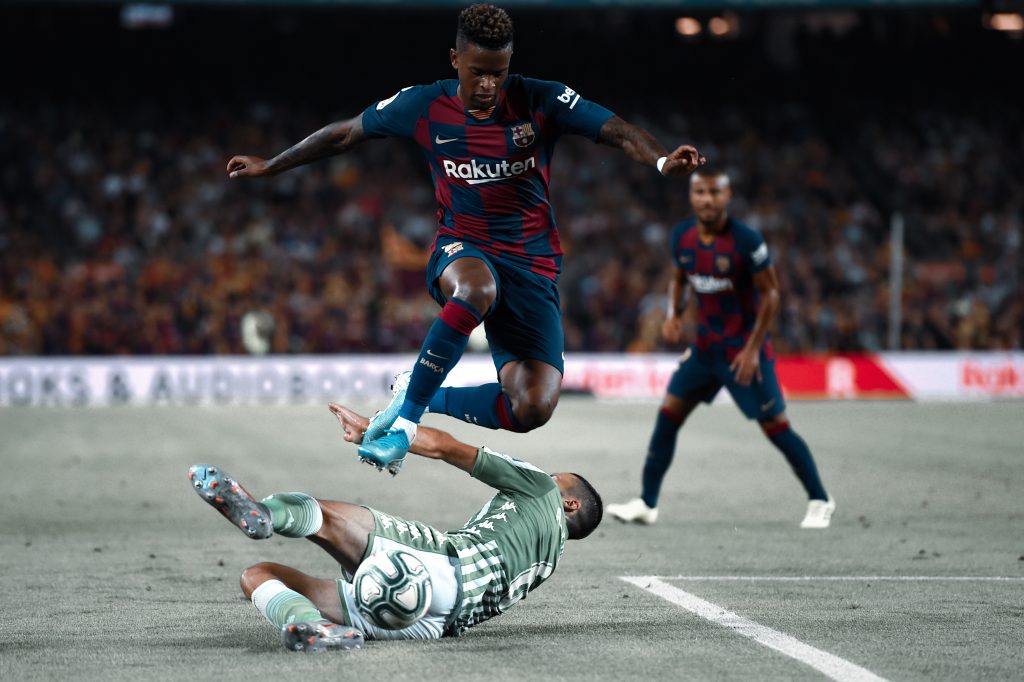 Nélson Semedo’s future has taken a new turn with the Bianconeri showing interest in the Portuguese full-back. Juventus intend to acquire Semedo in exchange for Pjanić, De Sciglio, and cash.

According to Sport, Semedo could be on his way out in a player-swap plus cash deal. The 26-year-old joined Barça in 2017 from Benfica for a fee of around €35 million. However, since he arrived at the Camp Nou, he hasn’t cemented his position at right-back. Former manager Ernesto Valverde preferred Sergi Roberto at that position, and Quique Setién, while he has used Semedo a bit more, hasn’t had a strong preference and would not argue against the Portuguese’s departure either.

Looking into the details of the transfer deal, the azulgranas would receive €25 million plus Juventus’ Pjanić and De Sciglio in exchange, and would be clearly getting the better end of the stick. Despite everything not going Semedo’s way, he is still valued highly by the club and also has a decent market value. After the stalling of his contract extension, the club doesn’t feel the need to keep him and are willing to let him go for a fair price.

The offer from Juventus is probably the best they can receive. €25m and the inclusion of an extremely talented player like Pjanić, added to an uninspiring full-back like De Sciglio but that wouldn’t be more than a back-up. That said, there is no way the Bianconeri will be willing to sit on the loose end of the deal. Losing a player like Pjanić without getting a replacement is not only uncalled for but also foolish. Their board will certainly be eyeing for some sense of beneficiary while negotiating with Barcelona.

While they are keen on acquiring Semedo’s services to sort out their issues at right-back, they wouldn’t be doing it at the cost of losing two of their players. Indeed, right-back is a pressing issue for the Italian champions. But it must be noted that their midfield is no small problem either. For years, Pjanić has been their only creative midfielder. With former managers preferring to have more destroyers in the midfield, the Bosnian was left with all the creative duties. To improve that department, they signed Arsenal’s Aaron Ramsay for free, but he is yet to show his full quality.

The reason why Pjanić is put for sale is because of Maurizio Sarri’s requirement of a pure regista. The Italian tactician has always had a regista in his system. And due to this, Juve have even looked at prospects of swapping Pjanić for Chelsea’s Jorginho. So it must be clear that, even if Miralem is a part of the Semedo deal, there must be some incentive at midfield.

Reports from Fabrizio Romano indicate that Juventus “only want Arthur”. The Brazillian midfielder is in his second season at the Camp Nou and has no intentions to leave the club, though. Nevertheless, he has struggled to find his way due to fitness and off-pitch issues. Despite the several problems looming over Arthur’s career as a blaugrana, he has vowed to stay and succeed. Juve’s interest in the Brazillian is fairly understandable. A player of Arthur’s capabilities would bolster their midfield strength. Notwithstanding, his refusal to leave and the uncertainty over whether he can play as a regista might be the reason why the deal falls out.

❛ There’ll always be rumours, but I’m honestly really clear about the fact that the only option I’m interested in is staying at Barcelona ❜

Arthur Melo
on his future

Regarding Barça’s stand, they’d happily accept the initially reported deal of Pjanić and De Sciglio plus cash. While the Italian full-back might not be the best option in the world, there is no reason to not have a squad player. But this would imply that Sergi Roberto would remain as the default choice at right-back unless they sign someone else.

There would also be a lot of complexity over Pjanić’s tactical role at Barça. He is a player who thrives at distributing via long balls over the defence or across the flanks. The Catalan outfit’s possession-styled play involves patient build-ups and playing through the lines. Pjanić, although competent, isn’t the go-to solution for unlocking defences as the team already has enough distributors and passers. His set-pieces are excellent, and his through balls are always pin-point, but his possessional play and work rate are far from what Setién would be looking to work with.

Either way, the deal poses multiple complications on both ends of the table. Barcelona wouldn’t mind adding Rakitić in the proceedings, but La Vecchia Signora is likely to decline that option. With too many players involved in the discussion, the negotiations would presumably fall through, and this would remain nothing but another unfinished transfer story.