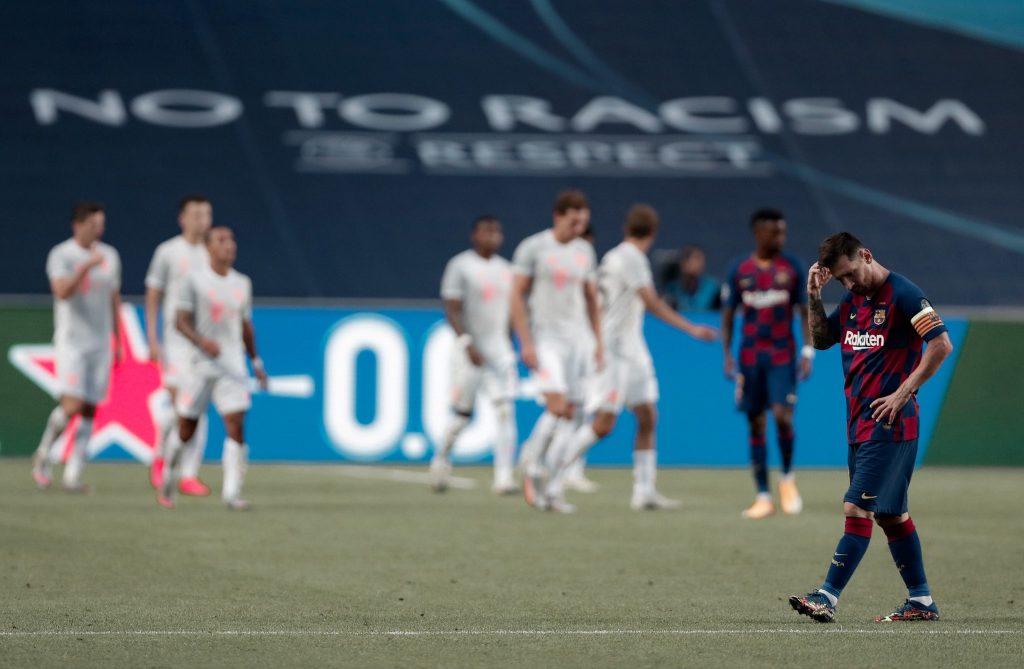 Back in 2017, when Juventus scored three against the team that had orchestrated the great Remontada beforehand, we kept saying ‘but we have Messi so everything’s possible‘. It wasn’t to be that year and the bout at the Camp Nou was not nearly enough to ascend that three-goal mountain against an astute Italian team. There’s always next year though, right?

But Juventus were not exactly a one-off, nor were the Paris Saint-Germain before them because remember, before dismantling the Parisiens for that historic comeback, Barcelona had to lose 4-0 first. Now that was unexpected, to say the least. But no one thought it would become the norm.

When the Catalans drew Roma next year, a large sigh of relief was heard in the camp and among the fans. And after the first leg had ended 4-1, everyone thought the Azulgranas finally left the ghosts of the past behind them. Not quite.

The Roman gladiators had more fight, more heart and frankly a better setup, all of which resulted in a 3-0 that would shake the still pretty freshly appointed Ernesto Valverde to the core, making the fandom lose their trust and the players their confidence. But you guessed it, it was not over yet.

Liverpool were always going to be a tough opponent and their heavy metal football always a huge problem for the ageing Barcelona team. ‘But we have Messi so everything is possible‘, and indeed Messi-magic delivered in the first leg as the Catalans stormed to a beautiful 3-0 victory at the Camp Nou.

The second leg, however, would bring about a rather familiar sight: total demolition and humiliation as the Reds put four past Marc-André ter Stegen to complete the comeback of the ages, ultimately leading them towards the final and the big trophy. At this point, everyone knew Barcelona were a broken club but no one realised just how broken indeed.

If there were any doubters or better yet, the over-optimistic Culers hoping this would be magically fixed, Bayern Munich put them all to bed rather quickly. It took them a couple of minutes to score the first one in their 2019/20 quarter-finals against the Catalans and by half-time that would be four. By the end of the game, they would score four more along with one that even rattled their own net and one more that was ruled out.

That’s 10 goals in total for a final scoreline of 2-8 in favour of the Bavarian titans. Which brings us to here – the 11th hour. The club is in disarray, financially broken with no sporting plan, the board is a mess, the players on the brink of all getting fired and Messi threatening to leave for free. The question on everyone’s lips is the same: ‘How did it come to this?‘

But the baffling thing is that people actually see it as a big surprise. This is the result of years of hard work and persistence to get every single aspect, both sporting and financial-wise, dead wrong. Funnily enough, it all started with Neymar Júnior’s departure to Paris Saint-Germain.

Admittedly, Barça were not exactly transfer gurus before that either but this exposed their flaws more so than anything else. What followed were a billion pound worth of transfers, each more expensive than the other but all equally useless on the pitch.

And let this be said right away – Ousmane Dembélé, Philippe Coutinho, and Antoine Griezmann, among others, are players of immense quality but football is more than 11 individuals on the pitch. We saw as much as they all failed to impact the team the way the board had envisioned it. Sadly, people who knew nothing about football made the biggest footballing decisions, not the first time in Barça’s history mind you, which ended up dragging the team even deeper into the abyss.

So much money spent but no results to show for. ‘But we have Messi so everything is possible‘. And that phrase remained true throughout as Barcelona soared to some LaLiga and Copa titles, keeping Real Madrid on their toes domestically. But that also proved to be the plan A, B, C and D until it could work no longer.

Sure, Messi remained mostly brilliant throughout, topping the charts and making others believe Barcelona were not as bad as they actually are. But the problem is they were. A team of one can’t win, even if that one is actually the best footballer to ever grace the pitch.

The board hid behind him and the titles he brought, referencing the good old days, the treble from 2015 and playing the same old cards whenever something went wrong. But all of that was very short-sighted and it felt like Josep Maria Bartomeu only cared about his tenure and not about the club’s future.

So the real question is not exactly what went wrong. Because, frankly, the answer could very well be everything – the transfers, the tactics, the personnel in charge, the personnel on the pitch and the whole planning process. The question should be ‘how did they not see it coming?‘

Again, this is hardly a surprise – it was coming. The clock has been ticking for years now and it will strike midnight before long. This is truly an end of an era and we must not forget that football is cyclical. You cannot win all the time and everyone’s time at the top is limited.

But big clubs like Barcelona have to be able to prepare for the future. The worst thing is that they had all the resources and all the people to do exactly that. Instead, now they’ll have to do it all at once.

In a way, we all knew this was coming and luckily, Bayern were there to speed the process up. To open everyone’s eyes and break that smokescreen the papers and the board have deployed to blind the fans and even the players to some extent.

But they can hide no more and yes, this is a humiliating end of an era but it’s also a new beginning. You don’t get time to rebuild if you’re a big club. There’s no trial season or two to get you back on your feet. No, Barcelona will have to pay the piper now.

Rebuilds take time, that’s why you have to go step by step every year. ‘But we still have Messi so everything is possible‘. Of course but isn’t it quite telling that almost five years later, we’re still repeating that sentence like a broken record?

There are reports of Messi potentially leaving the club if something doesn’t change drastically. Is this the send-off worthy of the greatest player of all time? That will be Bartomeu’s legacy.

Not the treble, not the expensive signings, not the faulty tactics nor the domestic quasi-dominance. This. Wasting Messi’s prime years in chase of his golden goose on a hill of false promises.

Can he live with that?