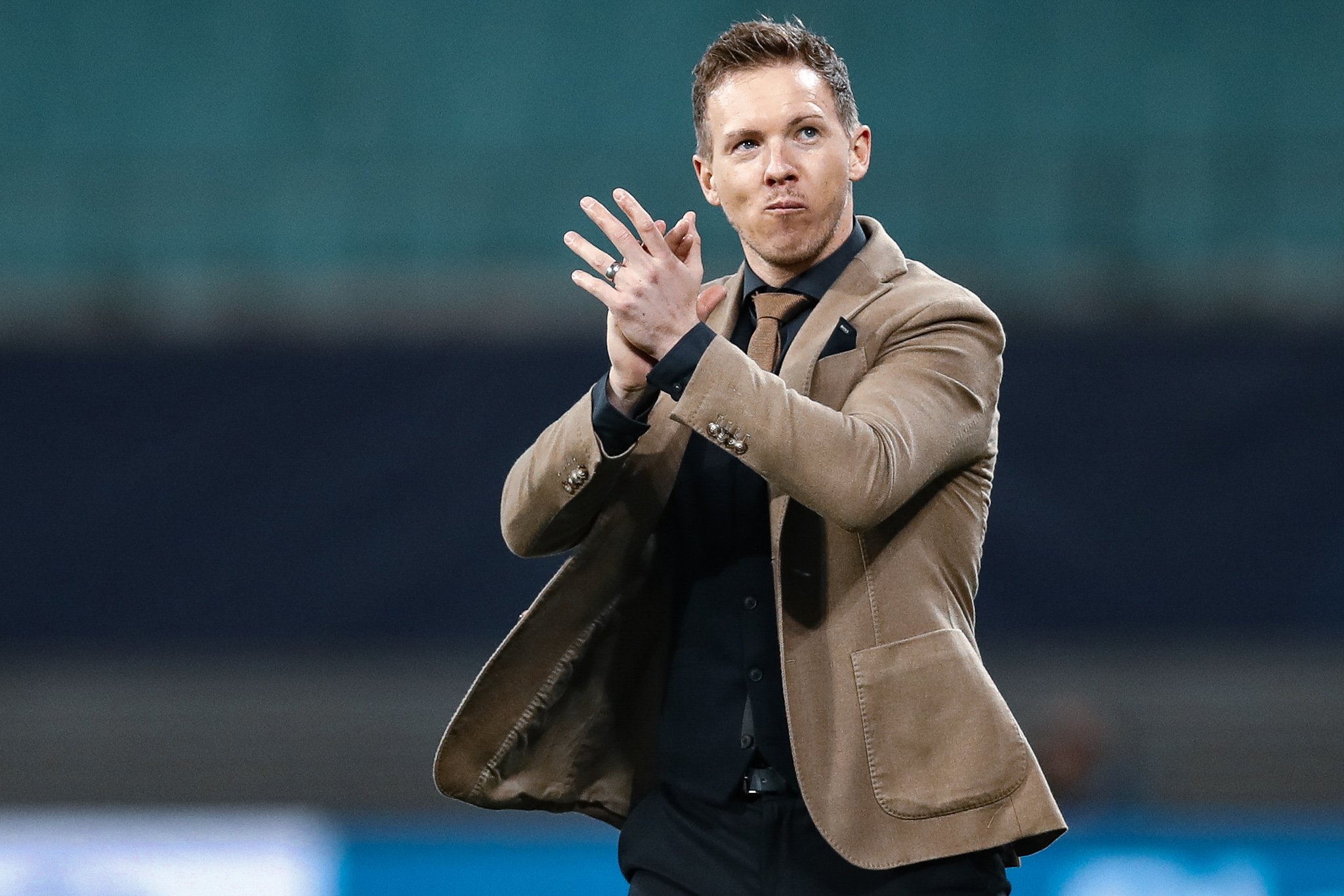 Despite being just 33, Julian Nagelsmann is the man who can take Barcelona forward as the club embarks on a new era under a new administration soon.

From Johan Cruyff to Pep Guardiola, some of football’s most innovative thinkers have graced the Camp Nou throughout the decades. At the height of their powers, FC Barcelona were pioneers, synonymous with styles of play that propelled the sport forward. But in recent memory, they have been the complete antithesis of everything they once stood for, devoid of awe and tactical distinction.

Facing bankruptcy, presidential elections, and a much-needed squad overhaul, Barça need the right manager at the helm — someone bright and forward-thinking, symbolic of the club’s ambition.

While only one month younger than Lionel Messi, Nagelsmann is already staking his claim as one of the best managers in the world. He’s inventive, eager, and could be exactly what Barça need to reestablish themselves as the kings of world football.

Nagelsmann did not enjoy an extensive playing career, but he seems en-route a decorated managerial life. (Photo by Lukas Schulze/Getty Images)

Nagelsmann was only 20 years old when a knee injury forced a premature end to his playing career. Given that he was still under contract with FC Ausburg, the aspiring centre-back was put to work as an unofficial scout for current Paris Saint-Germain coach Thomas Tuchel.

He then moved on to coach 1899 Hoffenheim’s youth teams before being appointed manager of their senior-side in 2016. With that, he became the youngest permanent manager in Bundesliga history at age 28 and led Hoffenheim to their first-ever Champions League berth in 2017 –already historic.

Nagelsmann is now midway through his second season at Red Bull Leipzig, where his aspirations are equally matched by the club’s. Last season, he became the youngest manager to lead a team to the Champions League knockout stages, guiding Die Roten Bullen all the way to the semi-finals, before being knocked out by none other than Tuchel’s PSG.

Nagelsmann’s sides are attacking, high-pressing, and versatile. He employs a myriad of formations, most commonly 3–5–2 and 4–4–2, tasked to exploit his opponent’s weaknesses and counter their strengths. He also consistently rotates his squad and fielded 29 different players across all competitions last season.

His formations and players may be subject to change, but his core principles are ever-present, ones that surround Johann Cruyff’s ideas about Total Football, and the ability of each player to play multiple roles and positions.

We have seen Naglesmann implement that by using Dani Olmo in nearly seven different positions – including defensive midfield. Apart from that, the well-known face of Marcel Sabitzer embodies Nagelsmann’s ideas. He, too, has played across multiple positions including on the wing, striker, defensive midfield, and even as a wing-back.

“[Formations] are just principles and things that players should do in different parts of the game. […] They are just numbers. I try to find a solution for the next opponent, depending on how I can put our way of playing football in the best system.”

Nagelsmann prefers to play out from the back, but never needlessly and lethargically passing the ball around. Leipzig like to drag their opponents to one side of the pitch before quickly switching it to the opposite flank, most often to a marauding wing-back.

He places high emphasis on verticality, using short but high-tempo passes to progress the ball. During last season’s Bundesliga campaign, Leipzig attempted the second-least amount of long balls per game, but the fourth most total passes.

The centre-back, typically Frenchman Dayot Upamecano, carries the ball forward to create a numerical advantage in the midfield. His movement is crucial in dragging opposing midfielders out of position, which in turn allows the multifaceted Marcel Sabitzer to advance and be a threat in the attacking third. Last season, the Austrian tallied 16 goals and ten assists.

Dayot Upamecano and Marcel Sabitzer are the prime elements of RB Leipzig under Nagelsmann. (Photo by Alex Grimm/Bongarts/Getty Images)

Konrad Laimer is another key player, whose versatility and high work rate gives his teammates freedom to roam, as well as lets the team adopt different shapes in offence and defence. The wing-backs are also vital as they add width and ascendancy in the midfield that allows Leipzig to dominate that area of the park. A standout is Angeliño, a Spaniard on-loan from Manchester City who already has five goals in 11 appearances this season.

In the attacking third, Nagelsmann encourages lots of off-ball movement, one-two passes, and quick layoffs. Frequently using two holding midfielders, one moves back into defence whilst the other can propel ahead, interchanging with forwards who like to drop deep.

The attacking midfielders often drift narrowly, forming a midfield box, dragging opposing full-backs out of position and establishing precedence out wide. These creative players in the middle allow for meticulous combination plays and precise passing. This constant movement and flexibility wreaks havoc for their opponents and leads to many goal-scoring opportunities.

They were also second in expected goals per match and shot-creating actions per 90 minutes. They were third in goal creating chances in the Bundesliga with 3.94 a game, only behind giants Bayern Munich and Borussia Dortmund.

Nagelsmann’s teams defend with cohesion and energy. Last season, Die Roten Bullen had the second-best defensive record in the league, conceding 37 goals in 34 matches, which by Bundesliga metrics is not very high.

His tactical flexibility allows for fluid formations, such as a two-man backline in attack morphing into five men on defence. This is coupled by the likes of Lukas Klostermann and Marcel Halstenberg, who fullbacks by trait, are used as overlapping centre-backs. His teams also use a high-line, rely on offside traps, and are very active in pressing.

“Our goal is to always take advantage of an interception to have an advantage of pace and speed over the opponent, who plays wide and wide.”

Naglesmann interview from Football Hackers: The Science and Art of a Data Revolution by Christoph Biermann

For further numerical context, in the 2019-2020 Bundesliga, Leipzig had the third-highest successful pressures rate (winning the ball back within five seconds of applying pressure) with 32.7%. In the Champions League, they were second in pressures in the attacking third, indicating where they do most of their damage.

Nagelsmann demands lots of energy, high work rate and versatility from his players, and the results speak for themselves. Although he’s yet to win a major trophy, he has proven he can succeed even without the biggest of names, and his squads are often greater than the sum of their parts.

Barcelona could benefit a lot with a few high-intensity training sessions with Julian Nagelsmann. (Photo by DAVID RAMOS/AFP)

The 33-year-old has also helped developed many star players, such as Bayern Munich’s Serge Gnabry and Chelsea FC’s Timo Werner, who he worked with at Hoffenheim and RB Leipzig respectively.

In training, Nagelsmann “never wants to do the same drill twice,” according to his interview for the book Football Hackers. He has 31 principles of football that he integrates and specific goals he wants to accomplish every session. He also utilizes technology like drones and has even placed a giant video screen next to the training ground so players can see their movements and shapes from a different angle.

There are a plethora of great managers Barcelona will be looking at should Ronald Koeman not be a long-term choice, including club legend Xavi Hernández, and Julian Nagelsmann should certainly be on the list. He’s proving to be an innovative tactician and a commanding locker room presence and could help propel the Blaugrana into a new era. In fact, he’s already proclaimed his interest for the job.

Nagelsmann can help develop countless youth stars for Barcelona, bringing the best out of an underperforming squad, and his attacking brand of football would translate well to Spain. Regardless of a lack of major silverware, he’s already off to a promising start.

Julian Nagelsmann has the mind, the character, the energy, and the drip to become the next manager of Barcelona. (Photo by Andrew Yates/Sportimage)

Nevertheless, Nagelsmann is by no means a finished product, and he still needs more experience that naturally comes with more years under his belt and working for a club with bigger expectations.

A defining few months is on the horizon for Barcelona, and Julian Nagelsmann could be exactly who they need to once again dazzle the world with style and ambition.