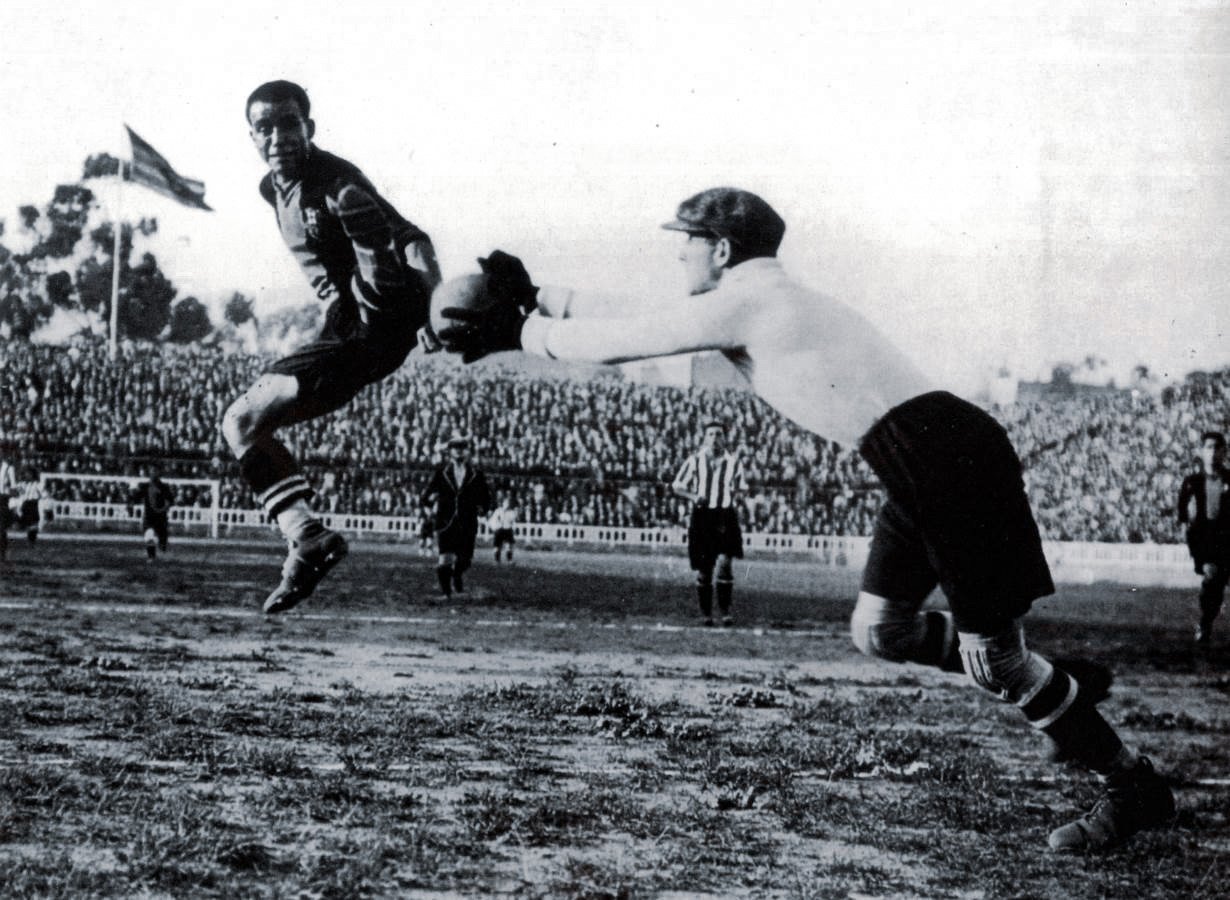 Josep Samitier was a surrealist artist on and off the pitch and a legendary midfielder that brought Barcelona its first successful era in the 1920s, as well as some controversy throughout his career.

Surrealism, a deceptive interrogation of reality that transcends the human subconscious to manipulate or alter the coherent understanding of existence. Josep Samitier Vilalta, or “L’home llagosta” (The lobster man) was the most surreal portrait in the history of FC Barcelona. He was called the ‘surrealista’, because his genius produced the illusions on the pitch that were perplexing to fathom as reality.

History is constructed up on the interdependency of figures and events. Samitier was one of those figures who created a rift in the annals of world football to produce the first reverberation of football in the streets of Barcelona. The footballing revolution in Catalonia peaked in the early 1920s, especially in Barcelona, as it was the beginning of the first golden age.

With the construction of the Les Corts stadium, the club assembled a group of talented, young players. Josep Samitier, along with Paulino Alcántara, Ricardo Zamora, Emili Sagi-Barba, Vicenç Piera and Agustín Sancho became the first generation of the club idols. Samitier, among others, was an integral part of Barcelona’s rebuilding of character and went on to become one of the most significant personalities both in terms of sporting and cultural relevance.

Samitier was born on 2nd February 1902 in a Catalan working-class family. As a young boy in the streets of Barcelona where the roads of passion and dreams lead to the grant Les Corts, ‘El Sami’ would kick the ball around waving at the passing commons.

After the club’s establishment, FC Barcelona had quite an attachment with the proletarian class. Especially at the time of industrial unrest, the institution always kept them close and the stadium was always packed with the same working-class populace. Young minds like Samitier who would grow up in the streets of Barcelona always had the ball on their feet and club in their heart.

Samitier started playing for FC Internacional before making his debut for Barcelona at the age of 17 in 1919. The club museum still preserves and cherishes his signing bonuses, a shimmering watch and a three-piece suit. By 1925, Samitier became the highest-paid player at the club and thus became the highest-earning player in the country.

The division of labour was evident in the early years of European football. Whilst the backline remained static to protect the goal, the forward line had to pick and fight the battle on their own. Samitier was among the key figures who created a paradigm shift from this prevailing ‘Basque style’, where the attackers held the sole responsibility to win the ball and navigate their own way to find a goal. Samitier was among the first players to orchestrate the game from the back. He was like a master of the opera performance where he controlled and navigated the rhythm and flow of the game.

Samitier was an exceptional player who could manipulate the ball like a wizard, and he dribbled the ball around the pitch like a ballet dancer. He was the first midfielder general in the history of Spanish football, whose role was the hybrid between a Pivote (central midfielder) and the Leñero (chopper) or sweeper. Samitier was the harbinger of the modern-day box-to-box role. Despite being positioned in a deep-lying role, Samitier was an outstanding goalscorer. It was rather unusual for a midfielder of that time to score an astonishing 184 goals for any club in Europe.

Even though Barcelona was graced with many prolific players, Samitier was the core of the magnificent Barça team of the 1920s. He would hack the ball from the opposition to carry the ball from the midfield to provide a line-breaking pass in the final third. His glorious days at Les Corts were filled with thrilling langosta (lobster) kicks which would eventually evolve into the modern ‘chilena’ or bicycle-kick. Samitier was an entertainer on the pitch. His ostentatious performance attracted the Catalans into the stadium.

His glittering thirteen years in a blaugrana shirt were decorated with 11 Catalan Championships, 5 Spanish Championships and the first Spanish league that began in 1928. Moreover, his time with Barça was embellished with title-winning goals in the Copa del Rey finals of 1922, 1925, 1926 and 1928.

Pepe Samitier’s momentous career at Barcelona transformed him from a sporting figure to a cultural icon in Catalan society. His reputation at the club produced a strong political outline for himself among the intellectuals in the society. It was an unprecedented period in the socio-cultural scenario of Europe. The entrée of subjective art and understanding by Salvador Dalí, Edvard Munch and Vincent van Gogh among other artistic prominence overtook the existing concepts of impressionism and naturalism.

Samitier aligned with surrealism, indulging the spirit of subjectivity. He reflected this both in the game and in his outside loyalties. His acquaintances mostly consist of radical artists and political figures of the time, including the tango maestro Carlos Gardel, Mauricio Chevalier, Salvador Dalí and, in contrast to his idol figure in Catalonia, he also had a close relationship with the dictator Franco.

In 1933, after a dramatic feud with the Barcelona management, an ageing El Sami dropped from the first team. Real Madrid, then called Madrid CF, took advantage of this dispute and were able to convince him to join the club. However, it was his secret allegiance with General Franco that helped Madrid to accomplish the operation.

Even though his short stint at Madrid wasn’t really celebrated, Samitier did guide them to win the La Liga title in 1932/33 and the Copa de España in 1934. But he played a significant role for Madrid, not as a player but as a super-agent in a decade-defining transfer of Alfredo Di Stéfano, whose intended destination was Barcelona. This signing was the inflexion point for Madrid in the 1960s, as Di Stéfano would go on to score 216 goals and play an important role in their European domination. Although Samitier’s allegiance with General Franco was visible, this transfer saga threw the relationship open into society.

Before the Spanish civil war burst out in 1936, Samitier spent a brief time in managing Atlético de Madrid, succeeding Fred Pentland in the middle of the season, but failed to keep them in the first division. Nonetheless, the season was scrapped as soon as the civil war started and Samitier, who had strong ties with the nationalist side, found himself blacklisted and arrested by the anarchist militia.

Eventually, he was released by the militia and fled to France. His exile to France was later utilized by the Franco regiment to spread the anti-communist propaganda by portraying this event in a film titled ‘The Stars Search for Peace’, where Samitier enacted himself. During his time in France, Samitier joined OGC Nice as a player, where he would unite with his old teammate Zamora. He went onto score 47 goals in 82 matches. In 1939, he retired as a footballer and briefly managed OGC Nice in 1942.

After two years and 8 months, the civil war ended and the nationalists alliance under General Franco demolished the second Spanish republic to establish the new Spanish state. Josep Samitier returned to Spain in 1944, and he took charge of Barcelona. His homecoming was celebrated as he guided Barcelona to win their second-ever La Liga title in 1945 and lifted the Copa de Oro Argentina by beating the Copa del Generalísimo winners Athletic Club de Bilbao.

Subsequently, Samitier became the chief scout of the club and his keen vision in recognising the talent resulted in the discovery and recruitment of Ladislao Kubala, a player who went on to become a legend at Barcelona. The recruitment of Kubala was the status redemption for Samitier, who had lost its shine after the Di Stéfano transfer saga.

In 1972, Samitier rested his soul and left his showmanship and sorcery to cherish in the memories of Catalans. Despite serving Madrid and his close relationship with General Franco, he was given an honourable state funeral as a Catalan hero. Samitier was the most symbolic player in the history of the club. His close affiliation with both the cultural and sporting context of Barcelona formed an irrevocable stature of him in the Catalan society.

Samitier, as a footballing visionary, is a reference to the modern-day midfielders and, on the other hand, he was an imperative cultural icon who embraced a revolutionary socio-cultural movement in his life. Samitier’s journey from being an ambitious boy in the streets of Barcelona to a footballing legend remains one of the inspiring and reviving narrative in the history of the game. Even today, walking down the Josep Samitier Street, one could still gather an enigmatic chanting celebrating the greatest artist in the history of Barcelona.