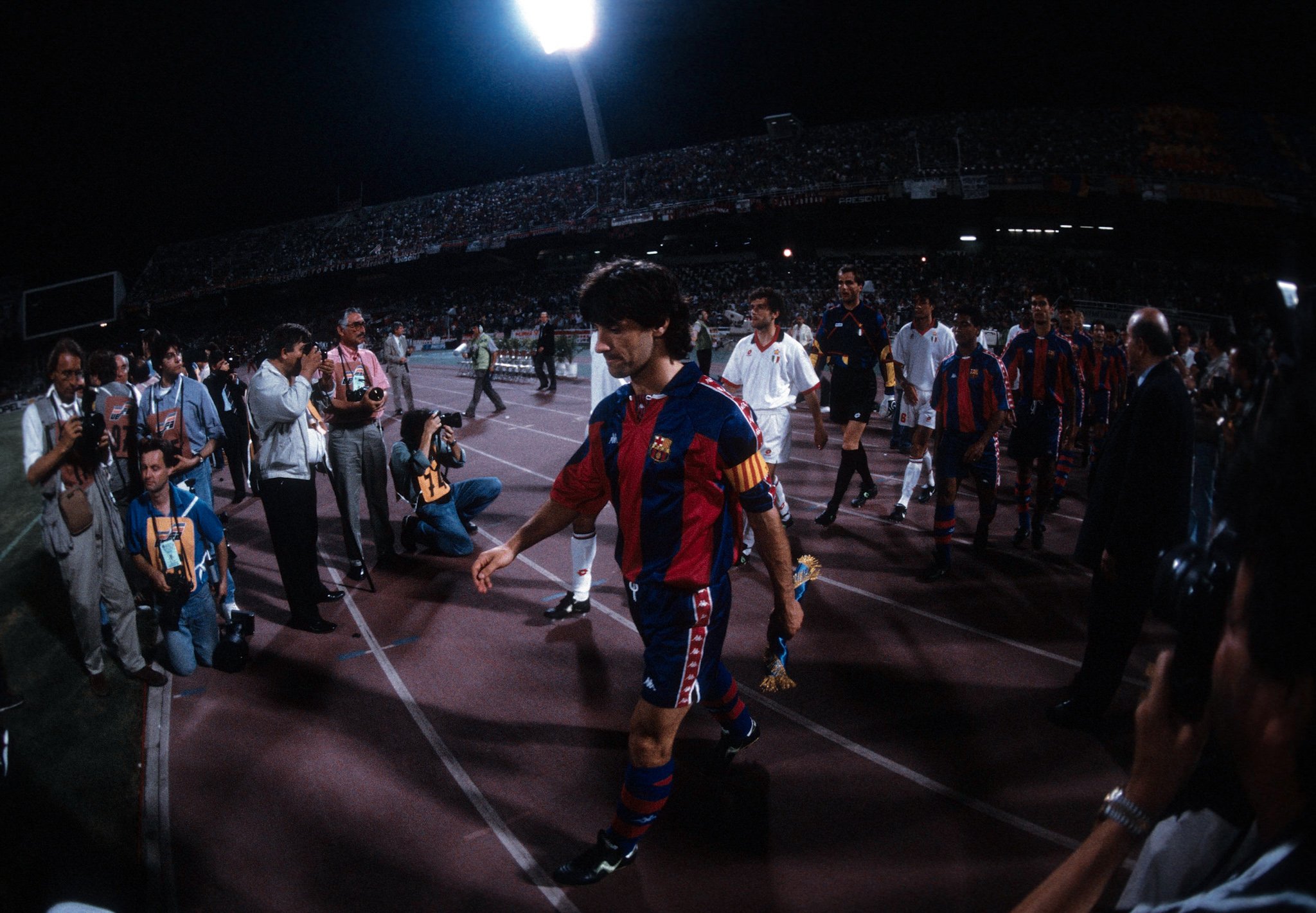 In 1988, FC Barcelona signed a Spaniard who would go on to captain the Catalans to European glory. Jose Maria Bakero joined FC Barcelona from Real Sociedad for €2 million and would go on to become one their best captains. The Spaniard was a pivotal part of Johan Cruyff’s infamous Dream Team and now is a Blaugrana legend, forever etched into the club’s rich history.

Bakero’s story started in 1980 when he made his senior debut for Real Sociedad at the age of 17. He ended the season with 27 appearances. Twenty-seven appearances for a 17-year-old player serves as a testament to the faith that manager Ormaetxea had in Bakero. Eight years later, at 25 years of age, Mari Bakero would be presented in the Garnet and Blue of Barcelona at the Camp Nou.

Bakero was made Barcelona captain in 1993. While captainship was originally going to go to Andoni Zubizarreta after Jose Alexanko’s exit, Johann Cruyff decided to make Bakero captain, mostly due to his commanding attitude and his second-to-none leadership skills.

On top of that, Cruyff also preferred to have a midfielder as a captain, because he thought a midfielder has an eye on everything happening on the pitch. All of these aspects, along with the fact that Bakero took responsibility for his actions, made him an invaluable player for the legendary manager.

Even to this day, his fierce attitude has not faded. In an interview in 2018, Bakero spoke about how important it is to be accountable for your own actions, to take responsibility for your shortcomings instead of searching for excuses that will do you no good in the long run.

Every day there are things that will make you think and with football, it’s the same thing. You have to learn from what happens every day. You can get mad at the coach or your teammates, or your dad, but you have to learn what has happened and what you have done wrong.

Evidently, the Spaniard tried to extend beyond the realm of just the sport. His words are something to live by, and he served as a role model with his attitude, inspiring the next generation of players with his off-the-pitch leadership.

While that is a more common concept today, with players like Marcus Rashford, Juan Mata, and Raheem Sterling among others taking incentive to focus at issues that revolve out of the sphere of the game, it was quiet alien back in the day. Bakero preaching his beliefs was, and still is something that fans can be proud of.

Bakero was not only a splendid captain, he was quite the player as well. His tenacity and his ability to lose his marker made him a formidable player. He often positioned himself in front of the opposition goal after manoeuvring past the defensive line. He was an absolute demon in the air and was able to head almost any ball, from anywhere, right into the net.

The Spaniard amassed a total of 339 appearances for the club, with his most iconic game for Barcelona, being against Kaiserslautern in the second leg of the European Cup, Round of 16.

It was the 6th of November, 1991. Barcelona was down 0-3. There were 30 seconds left. Ronald Koeman swung the ball into the box and in a moment of magic, Bakero snuck in between Kranz and Scherr to head the ball into the back of the German net. It was ecstasy.

That goal allowed Barcelona to advance on away goals, which paved the path to Wembley, and we all know how the night in Wembley ended. As a direct result of his clutch goal, Barcelona were European Champions for the first time ever, and the impression that achievement left on all young players is what eventually led to the Golden Era of the Catalan Giants.

Bakero is the embodiment of the term “club legend”. He spent 8 seasons at Barcelona and produced innumerable moments of joy. In his 8 seasons at the club, the Spaniard played 432 games and scored 115 goals.

Beyond all the silverware, Bakero’s greatest gift to the club was the unforgettable memories he helped form. If Bakero had never joined Barcelona, the Dream Team might not have ever been successful, the night in Wembley might not have happened, Cruyff’s philosophies might have been abandoned, and maybe Pep Guardiola may have never been appointed as manager.

Of course, such hypothetical statements can be made about any player, but they certainly hold true in Bakero’s case due to the direct impact he had on the team.

While his chapter at Camp Nou may have concluded, a new story is still being written. In 2017, he took charge of the professional youth football at FC Barcelona along with another former Barcelona player, Guillermo Amor. Today, Bakero is the Director of Football for Barcelona’s U19 team, and has a strict ideology about how the youth team should be run. How is his position and influence changes with the new board will be interesting to see, especially if Xavi Hernandez joins as manager.

“What we look for is talent. Sometimes talent comes with the smaller players and talent is often connected with how intelligent you are, and the most important thing is their mind. The difference for someone who makes ten million and another who makes one million is that this one scores and this one doesn’t get there. The margins are small and normally it’s up here (points to his head).“

Bakero’s philosophies are in line with what Cruyff once infamously said: “Football is a game you play with your mind.” He agrees that football, just like everything else in life, is difficult, but he’s a firm believer in the idea that if there is a will, there is a way.

Today’s Barcelona has lost its colour and character because of the lack of determination present among the players. The captains refuse to show their faces and come face to face with the fans after humiliating results; there is constant feud and drama going on behind the scenes.

FC Barcelona today, in all honesty, is an embarrassment. The resignation of Bartomeu and his board members is sure to pivot the club in a better direction, however, at the end of the day, football is played by the players, not by the management or the board. If the players are not willing to play their hearts out on the pitch, the same cycle of humiliation will keep repeating.

While no one doubts Lionel Messi’s footballing prowess, his leadership skills can be criticized. Three out of the four captains – Lionel Messi, Sergio Busquets and Sergi Roberto, went silent for weeks following the disaster in Lisbon at the hands of Bayern Munich.

Gerard Pique was the only captain who broke the ice off his boots, and faced the music with integrity and offer up his place in the team to young blood. While Ronald Koeman has been quite efficient in cleaning the squad but cutting out deadweights like Arturo Vidal, Luis Suarez, and Ivan Rakitic, revolutionalizing Barcelona will take time.

Committed players like Bakero are the ones who made Barcelona into an iconic footballing institution and are the type of players the Catalan giants are severely missing right now. For context, current Barcelona full-back Jordi Alba, after the Anfield humiliation, came out to target the fanbase: “Fans are spoiled.” Mediocrity has seeped into the club’s veins, which is why the same mistakes are repeated every year.

Bakero took pride in the armband, it was part of his flesh. (Photo via Imago)

It can be argued that with Bakero’s commanding profile and with his formidable mentality, results such as the 0-3 in Rome, the 0-4 at Anfield or the recent 2-8 in Lisbon would never have happened, but one thing that is certain is that Bakero would have been the first player to show his face to the press, the fans, the first one to take responsibility, the first one to sacrifice his place in the team for the sake of the team.