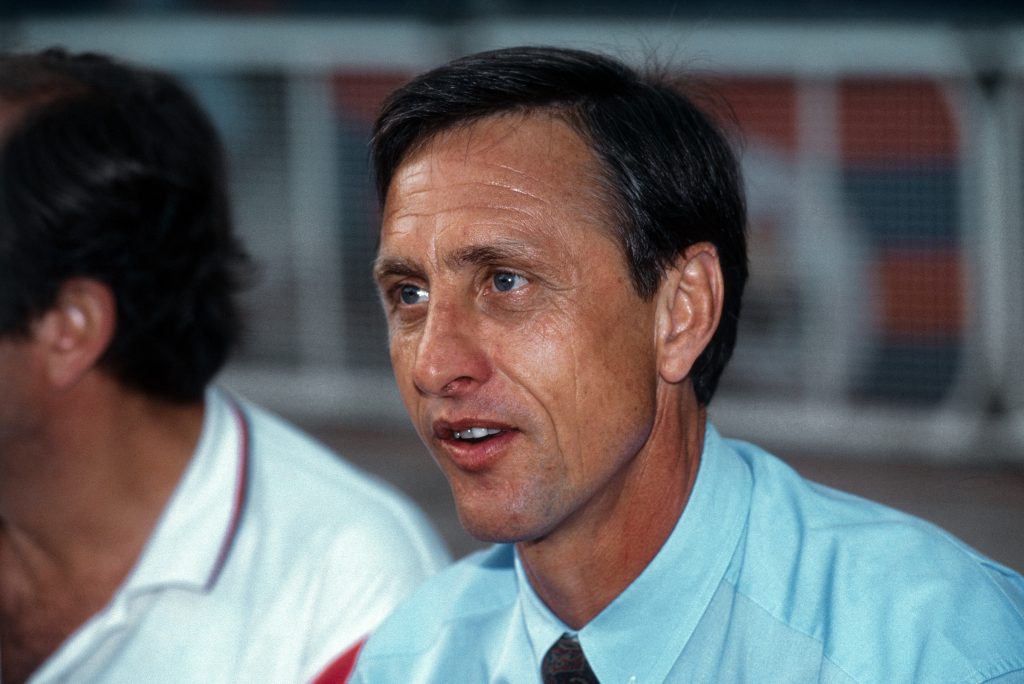 Johan Cruyff would be turning 73 today, but the Cruyffism, his philosophy and his own way of doing things will live forever.

Champions are remembered for what they achieve. Genius are remembered for how they achieve it. Johan Cruyff, champion and genius, was the purest expression of a how as a way to achieving the what. Often called a philosopher, a romantic, a deep thinker…the Dutchman actually was nothing less than a winner. He wanted to win. But he knew that, to win, it was the how that mattered. The path, the method. Johan did not invent a philosophy because he wanted to philosophise, but because he wanted to win.

Today, one of the most impactful figures in football history would have turned 73. A player, manager and mentor that revolutionised whole institutions like Ajax, Holland or Barcelona. And, above everything, football. With his technique, creativity, inventive play, broad repertoire of actions unseen before, and intelligence, Cruyff became one of the best footballers ever. Winning three successive European Cups between 1970 and 1973 with Ajax, then he was the icon of the most remembered runners-up ever in a World Cup. In the 1974 tournament, Germany ended up lifting the trophy, but Rinus Michels’ Clockwork Orange and their Total Football had a place in history. People started to realise for the first time that perhaps winning was almost everything, but not everything.

Still, having left his imprint as a player as arguably the best European of all time, at least until that moment, Johan went on to have as much importance, if not more, once he hanged up his boots. As he later told in a conversation with Xavi Hernández, “every time you move further away from the pitch, it’s a step back”. But Cruyff, despite enjoying his time as a footballer more, did not lower his level once he transitioned to the bench. Quite the opposite: he increased it. He managed to translate all the views he had as a player into his tactics, becoming one of the most innovative coaches with his crazy and sometimes misunderstood ideas.

❛ Playing football is simple, but playing simple football is the hardest thing there is ❜

Like when he was called a madman for implementing a back 3 with his carefree defensive approach. But it worked. “I was criticised for playing three at the back, but that’s the most idiotic thing I’ve ever heard. What we needed was to fill the middle of the pitch with players where we needed it most. I much prefer to win 5–4 than 1–0”, he would defend. His aim was to achieve numerical superiorities, to dominate positionally, to score, to have fun with the ball. Defence wasn’t one of his top priorities. Barcelona’s goalkeeper Andoni Zubizarreta once asked him how he wanted the team to defend a set piece. “How should I know?”, Johan replied. “You decide. You’re more interested in how to defend a corner than me”. Yet, with his specific way of doing things, he achieved success again. A lot of success. 4 La Ligas, one Copa del Rey and Barça’s first European Cup in 1992, among others. That said, his revolutionary capacity to mark his footballers through his charisma, quality and aura went beyond any practical triumphs.

Johan Cruyff, with the Netherlands during the 1974 World Cup | Photo by Imago

Cruyff was unparalleled and taught countless lessons on the pitch, on the sidelines and in life. His son Jordi recently wrote: “One day our father had us all worried as he arrived later than usual from one of his clinic visits, as he was undergoing treatment for his battle with cancer. When he returned home, my mother asked him a bit bewildered if anything was wrong. ‘I have good news!’, he announced with a wide smile. ‘I have been found a tumour!’. My mother responded: ‘But what kind of news are those!’. ‘Well, that they have found me the tumour and, as they have found it, now they can treat it and find a solution’, he responded. My father was a born optimist in the face of adversity. Maybe too much, some may think. But that’s how he was”.

❛ Every disadvantage has its advantage ❜

So Jordi Cruyff now often asks himself: what would Johan do? When there’s uncertainty and pessimism, like these days, Johan would have always looked at the bright side of things, as any adverse situation is just temporary. Logical and intuitive but equally revolutionary and radical, Cruyff should lead the way of culés, football fans and people in general. Some will debate whether it is the best way or not, but, in any case, it’s his own way.