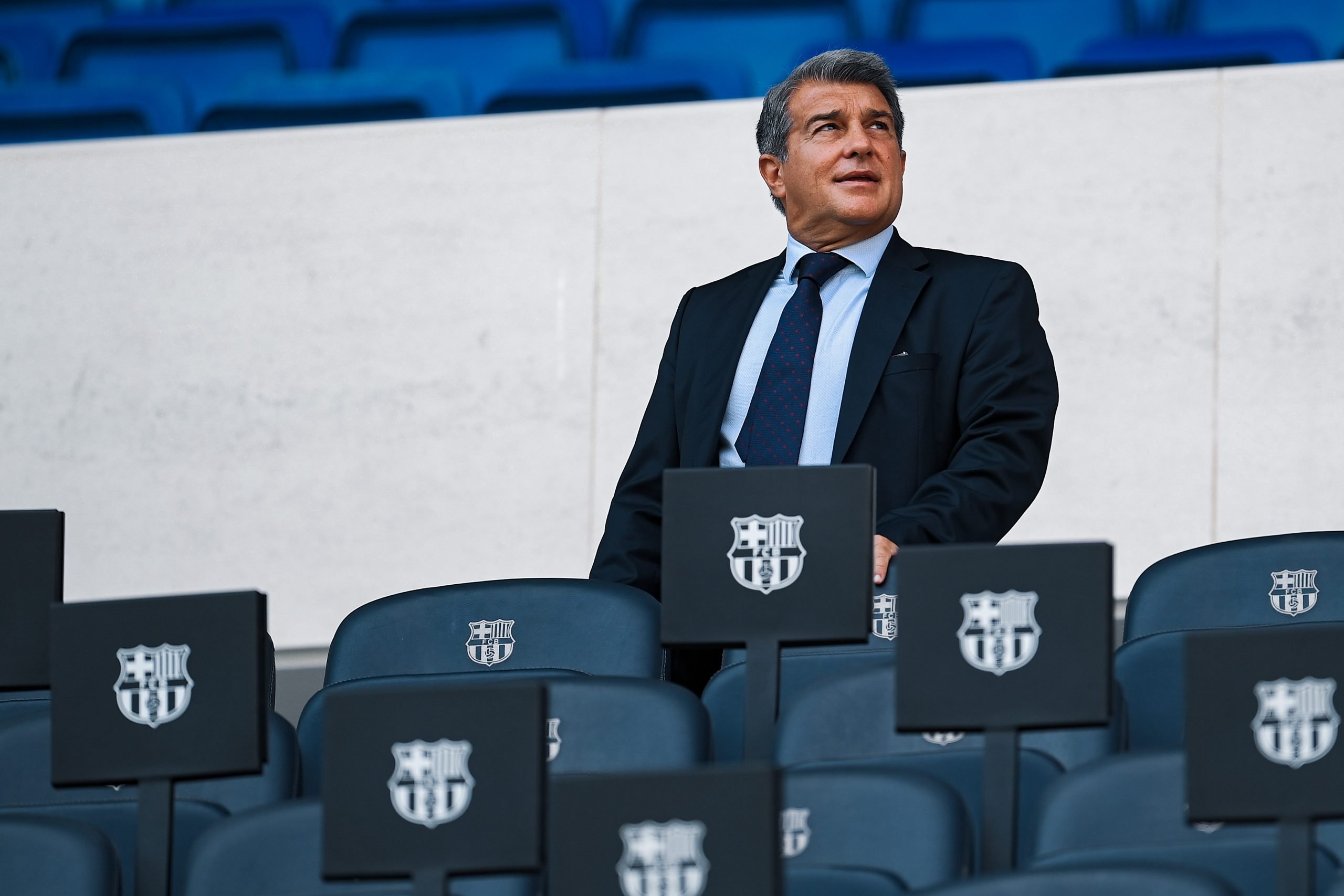 As the president of Futbol Club Barcelona, Joan Laporta has previously shown undeniable competence in his work. Through him the Catalans became arguably the best club team in the history of the beautiful game, playing a unique brand of swashbuckling football that left the entirety of the globe in sheer awe.

His election campaign this year did not have the sturdiest of foundations, but concurrently, he had perhaps shown enough to justify trust being placed in him for a second term.

Regardless of what happened in the past, the past is, quite simply, the past. In a situation as calamitous as this, the club was in dire need of someone ready to take the bull by the horns and bring the club back to its best state.

No sane individual expects Barça to be challenging for a Champions League title just some months after his return to the helm of the club, but at the same time, there should at the very least be a coordinated plan of action. Could anyone truly say that there is a clear project in place?

In light of this, Barça Universal explores the absolute dumpster fire that has been Joan Laporta’s first 6 months back at the club.

Promises as sturdy as a house of cards

Politicians – like Joan Laporta – have and will forever continue to make promises well beyond their capacities. Some presidents on a national level will make plans for infrastructure that is never built, and others like Laporta at club level will do the exact same.

The goal of this is simple: the more ambition is seen in one’s plan, the more confidence can be instilled in those who, through democratic means, can put them in power. At times, candidates overestimate their ability to change situations around them, and as such, easily fall short of their promises. No recent case could be a better example than that of Laporta himself.

As the sages once coined, a promise is a debt, and once in office, the president owed it to his supporters to keep his word. On the 20th of June, little over a fortnight before Lionel Messi bid farewell to the club of his life, Laporta had this to say:

“We have a plan, you trusted us to implement it and we will implement it, with discretion and professionalism. We make no false promises that we can not fulfill, and shall not linger on the past, and even less so make any decisions in a spirit of revenge. We are not like that. We were not taught to act that way. We don’t see Barça like that.”

Laporta’s biggest project – and admittedly that of every candidate at the club – was the extension of Lionel Messi’s contract. The Argentine maestro had made clear his desire to leave the club just a year prior as a result of the lack of progress in the club.

The damning 2-8 loss to Bayern Munich was, at the time, the final nail in the coffin for him. If not for former president Josep Maria Bartomeu essentially holding him hostage to the club, then he without a doubt would have left.

One year, a change of presidents, and a number of youngsters later, Messi felt some progress, the most important of which was of course the departure of Bartomeu himself. Knowing the severity of the situation, Laporta used Messi as a marketing gimmick for his presidential campaign, stating that it was with him as president that Messi would have the highest chances of staying.

More than cognisant of the club’s unfathomably calamitous situation, Laporta lied week after week after week, until eventually his lies caught up to him. It took just fifteen days for him to go back on his word on “making no promises he could not fulfil,” with Messi making a teary exit from the club he held dearest to his heart.

Moreover, the Spanish politician went from claiming that he was the only candidate who could convince Messi to stay, to publicly admitting that he was hoping that the greatest player ever would play for free.

Joan Laporta: "Every single night, I have sweet dreams about Leo Messi. I hope they will continue." pic.twitter.com/ghNsmQn1Nq

It is not only with Messi that he made false promises, but with his manager, Ronald Koeman, as well.

On the 28th of May, Laporta had this to say: “With us, losing has consequences.” He then boldly went to add on that,  “With me there will be no transition season, the goal is to win everything. We are in talks with the coach and the idea is that there are important incorporations, which will be arriving from next week.”

If, as he said, “losing has consequences,” then through what merit is the current manager in Koeman still at the club? His style of play does not coincide with the club’s image or values, and neither do his performances, let alone the abysmal results with his back against the wall.

Before the goalless draw against Cadiz on the 21st of September, he promised specifically that as fans “we [would] be sure that the team will try to win” and that he and the club “[knew] what needs to be done and that [he] will try to solve it.”

He says there are no transitional seasons and that Barcelona will try to win everything, but yet week after week he tells the fans to accept that these are tough times, essentially accepting defeat without ever learning from it. The crop of players Koeman has at his disposal is painfully underused, but will the change Laporta spoke of ever come?

Laporta is a man revered for his bold decision making, yet there is nothing inspiring that he has done as of yet. The only major decision he made at the club was a system-wide revolution, sacking almost all coaches from the club’s subsidiaries, including a fan favourite in Garcia Pimienta.

At this point in his tenure, it’s a trope that every single promise he makes will fail to come to fruition. It is quite disheartening how much is promised and how little actually happens.

A lack of a clear path forward

When it comes to matters concerning signings, Joan Laporta can be forgiven for his inability to make changes; even though this is something he promised to be possible last summer. The way forward depends on a number of factors beyond signings, most notably the management of the squad.

Laporta entrusted the keys to the kingdom to an individual without a clue on how to govern it. Ronald Koeman did indeed demonstrate that he is capable of bringing out performances from this team in the middle of last season, but in the current campaign, there is little that can give off the impression that he knows what he is doing.

Every single match follows more or less the same script. The Dutchman will make some absurd changes to the starting eleven, the formation in which they play in, Barça will lose by three goals to nil, he will blame his players instead of taking accountability. It is a perpetually abhorrent cycle.

One of the hallmarks of a good club presidential candidate is a sporting plan. It is perhaps the most important thing. Granted Laporta is incapable of bringing in the players he desires, he at least should have a concrete plan of how he wants the team to play and who best to lead it.

A former rival in ex-candidate Victor Font was often mocked for his obsessive and seemingly blind faith in Xavi Hernandez, but at the very least he was affirmative that regardless of what Koeman did, Font knew who he wanted to lead the club into the next generation. Laporta has no such plan.

Victor Font during his electoral campaign: "If I become president, Koeman will not be the manager in 2021/22." pic.twitter.com/QvGl338Kul

During the summer, rumours surfaced that Laporta would fire Koeman and bring in another manager who prioritises positional play, but at the end of the day, as always, nothing happened.

As of right now, with Koeman’s forces are just about as clueless as their manager, one would expect Laporta to pull the plug and reinforce the team with a better manager; who himself should have been planned for from long ago. Despite this, few of the names brought out had anything worth writing home about.

Andrea Pirlo and Roberto Martinez were at some point – with the former still being closely monitored – disparagingly close to the club. Marcelo Gallardo would have to wait until December to leave River Plate, Erik Ten Haag is bound to Ajax till next summer, and Xavi is still believed by Laporta to be unprepared for the big stage.

All this reeks of unpreparedness, and a lack of a clear project going forward. Laporta, in perfect synchrony with the first team manager, is seemingly just ‘winging it’, when situations this tense objectively require far more planning than what is on offer at the moment.

How does he plan to attract top class footballers without money, and why bother having interest in them in the first place (case in point Erling Haaland)? Who does he expect to lead the project when there is seemingly no project to lead in the first place? For how much longer will Koeman remain, and when will the horrid and shameful performances week after sorrowful week come to an end? Nobody knows, and it is precisely that which is the problem.

Six months into his second tenure as Barcelona president, Joan Laporta has not had the best of starts. The Catalan has struggled to hold up his end of the bargain when it comes to promises he and only he makes, and this is a habit that does not seem to be going away any time soon.

His inability to do this has resulted in a degradation of the team from an individual and collective standpoint, and continues to as well.

Thus far there is little semblance of a sporting project, however it is never too late to turn things around, especially with more than five years left in the presidency. Given his pedigree in the past, there is a reasonably high chance that he will get Barcelona back to their previous heights, but as of right now his planning for the future needs to be much more rigid.

There is absolutely no need to make empty promises, and the same goes for his sporting project, or lack thereof. Both these aspects need to improve over the next few months.