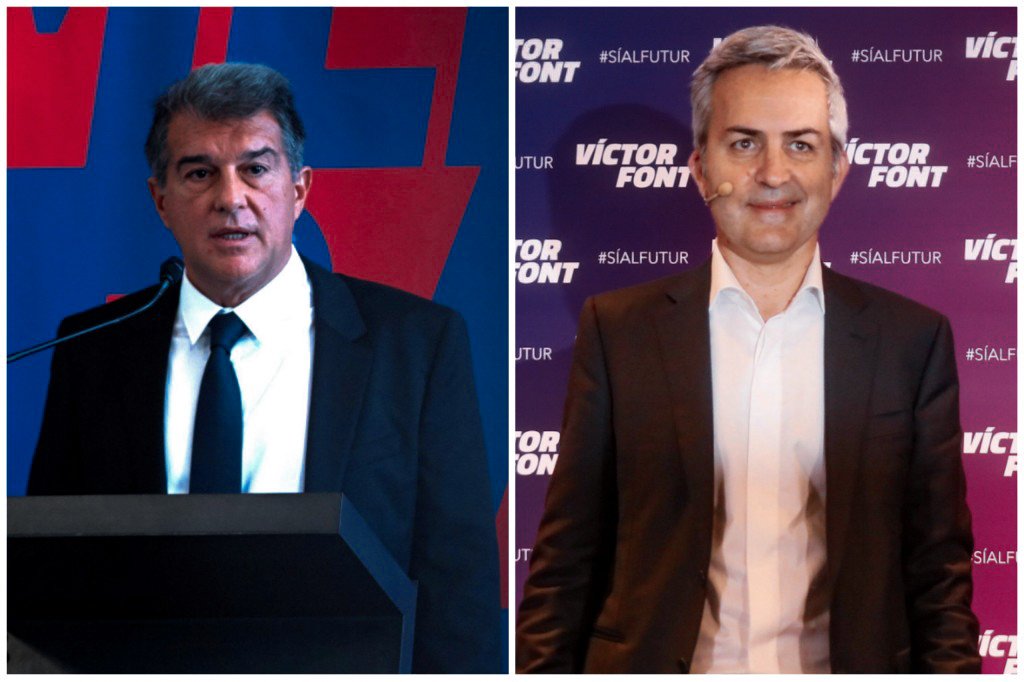 The long-awaited presidential debate finally unfolded earlier today as all three of Joan Laporta, Victor Font and Antoni Freixa faced the media and each other. Of course, the whole thing was officially relayed by Barcelona themselves as we get closer to the election date.

But even though there are three candidates, for the majority of the debate, it largely felt like a one-versus-one battle between Laporta and Font. Freixa too had some good points and did his best to fight the other two giants but was outgunned and silenced rather quickly.

As a result, Laporta and Font could lock horns and get at each other’s necks throughout the debate and we’ll highlight some of their most fiery quotes to emerge from the discussion.

Both candidates were quick to mention some of the biggest Barcelona names in an attempt to sway the socis. Font, for example, kept suggesting Xavi himself is supportive of his project: “It’s possible to sign. The project is essential, the people… The socios must know who will make the decisions: Xavi Hernández, Jordi Cruyff, Tito Blanco, and another person we cannot be named named.”

Laporta, on the other hand, didn’t like that at all and responded harshly upon hearing Font utter Xavi’s name. He said: “You must have worked a lot with Xavi, Jordi Cruyff and Benaiges, but they have all denied you. You have made a lot of corrections, you have had a lot of denials. Xavi, Xavi, Xavi, Xavi. You keep repeating that. Either you don’t know the reality of Barça or you don’t know these people. You will have worked with them, but they have denied you.”

Of course, the fans and the socis will be happy to hear Xavi is part of the new sporting project but until the Barcelona legend himself confirms this to be true, we can’t jump to any conclusions. In that regard, Laporta is right and has once again thrown down the glove on his rival.

But Font himself also had some good points. With the pandemic still at large across the globe, electronic voting was a highly-debated topic at Barcelona. Not only would it make for a much safer approach to the elections but would also enable more socis to join in on the voting.

Font was quick to remind everyone Laporta was against such a system, saying: “If you agree with electronic voting, why didn’t you give me any support to bring it to the assembly?”

Ushering Barcelona into the modern age is one of the fundamental things Font has on his list, should he indeed be elected. In his own words, his idea is to once again make the members feel like true owners of the club.

This is what makes Barcelona so special and it’s the model that has served them well throughout their history. He said: “A fundamental pillar of taking Barça into the 21st century is that the members are, once and for all, treated as owners of the club. We have worked on it for years. We want the member to participate in the club’s social life.”

It does seem, however, like Font is very much about the roots and bringing the past back to life. To be fair, both candidates advocate things that are similar in their essence, only they wish to achieve it through different means.

Laporta, for example, is also adamant about giving power to the socis once more but he plans to sway them by ensuring Lionel Messi stays and by building a competitive team via his vast connections. “All the agents in the world of football have addressed us, but I don’t want to destabilize the team. “What we have to do is motivate the players and coaching staff. At Barça there are no transitional seasons. I will try to convince Messi to continue and I can do it.”

A big part of his campaign is also based on the past success he’s had as a Barcelona president. After all, the most successful year in the club’s history had happened under his watch and he was quick to remind everyone about it.

However, this is also what Font dislikes as Laporta makes it look like he has the magic formula for repeating that success. He said: “It is not credible to say that ‘in 2009 I won a sextuple and now, as if by magic, I will do it again'”

But the issue is, Font himself has done a lot of mistakes during his own campaigning for the position. And this may be what makes the difference in the end – Laporta is experienced and at times, that’s a very visible difference between the two.

Not to mention that Laporta is making sure no one forgets about his rival’s blunders. “If you say you’ve worked hard, then it looks like you haven’t worked very well because you’ve had several errors and you’re just rectifying mistakes”

All in all, the debate was a heated discussion with the two frontrunners definitely taking the spotlight. Freixa, unfortunately, couldn’t do much to interfere.

We’re now just one week away from the election day and it remains to be seen who will have gained the most out today’s debate by the time we finally get there.

Either way, in just seven days, Barcelona will have a brand new president, whoever that ends up being.