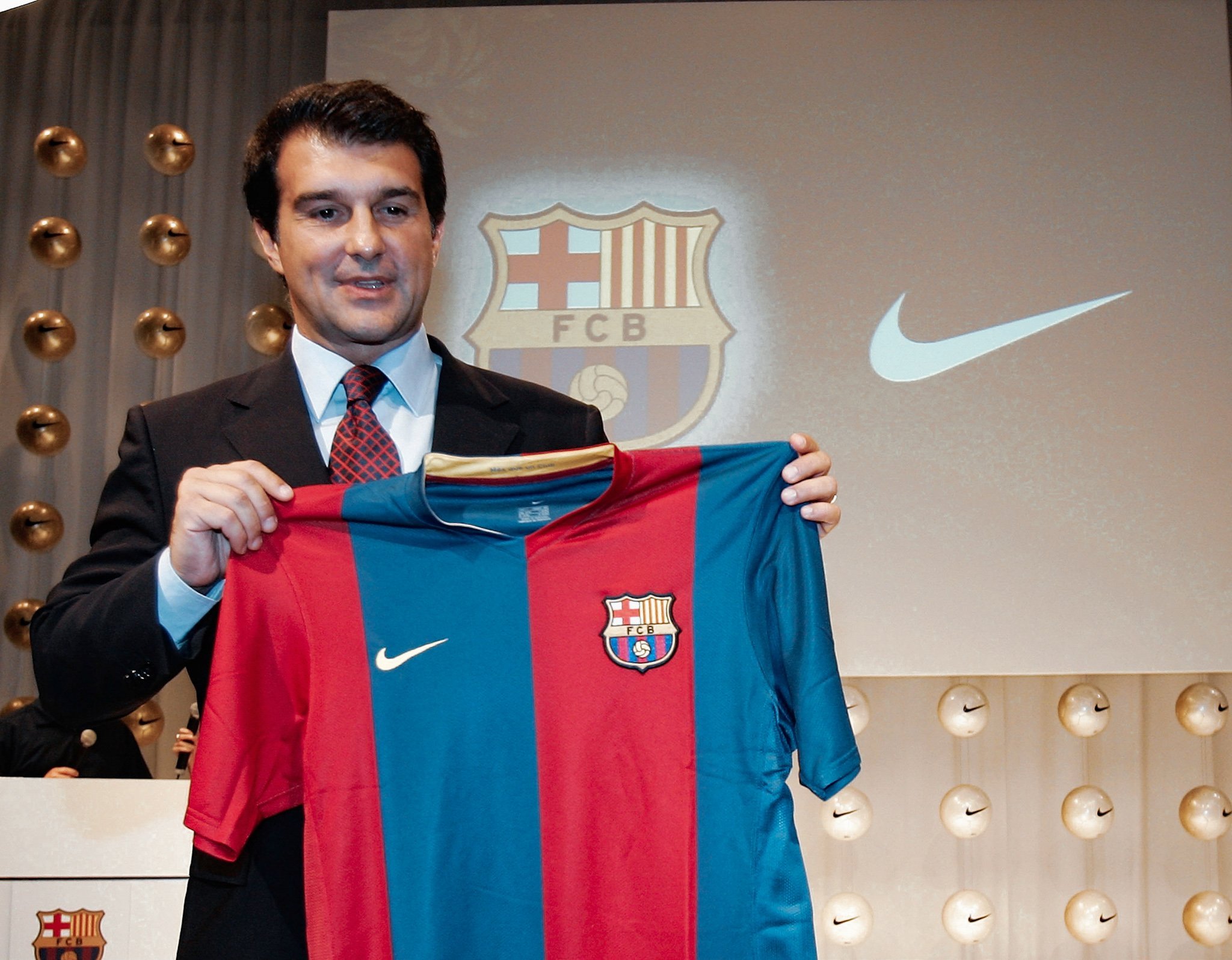 With FC Barcelona’s presidential elections set in place for January 24, 2021, prospective candidates have been announcing their campaigns. Among them is Joan Laporta, president from 2003-2010, who led the club from an institutional crisis to European dominance. Barça Universal takes a look back at Laporta’s time as president of FC Barcelona.

Joan Laporta’s first foray into club politics came in the 1997/1998 season. He and a group of disgruntled socios formed an opposition party called L’elefan Blau — translated to the Blue Elephant — in retaliation to incumbent president Josep Lluís Núñez. Núñez had led Barça for 20 years and oversaw a period of tremendous growth and success.

Nonetheless, various members grew unhappy with his leadership and felt that his board lacked transparency. As a result, Laporta and L’elefan Blau helped facilitate a motion of no confidence, but to no avail.

Laporta was always an active participant, which helped his case when he ran for President. (Photo by LLUIS GENE/AFP)

After years of pressure, Núñez eventually resigned in 2000, putting an end to his 22-year reign. His vice-president, Joan Gaspart, was his successor.

To set the stage for Laporta’s presidency, it’s critical to consider what the club was like under his predecessor.

Gaspart’s three years in charge were characterized by poor financial management, no defined transfer policy, and no on the pitch success. Barça were trophy-less since 1999, they had four managers in three seasons, and spent 150 million euros (equivalent to roughly 200 million euros today) on 16 different players.

According to the same source, in Gaspart’s final season, the club profited about of 123.4 million euros, less than half of Manchester United’s at the time. Wages also constituted over 80% of financial turnover, the club endured a deficit of 72 million euros, and was in debt of 186 million euros.

Gaspart resigned in March of 2003 when the Blaugrana were two points away from relegation. His successor would inherit a club in disarray.

Laporta was a dark-horse candidate in the 2003 election. His running mate was Sandro Rosell, who would eventually become president in 2010. Their campaign was symbolic of a young generation coming to shake-up the club and establish a new status quo. Although relatively unknown, the ex-lawyer was backed by Barça icon Johann Cruyff, which helped elevate his clout. He also notoriously promised to sign English star David Beckham.

With Laporta as President, Barcelona embarked towards a new era. (Photo via STR/AFP)

In June of 2003, the 41-year old won the presidency with 52.6% of the vote, but Beckham would sign with Real Madrid only a few days later.

Laporta’s campaign ran on “The Great Challange”, an overall plan to strengthen the club economically and lay the groundwork for a team that would once again dominate world football. A native Catalan, Laporta also wanted to strengthen the club’s identity, and boost public spirit and universality.

Laporta saw the opportunity to change how the club was run, and with him came a new level of professionalism and business savvy. For the first time, business, marketing, and other professionals constituted Barcelona’s board. These specialists’ knowledge and expertise helped streamline the club.

Laporta’s business strategy implemented a “virtuous circle”, a positive feedback loop wherein good results in one area affect another, ultimately resulting in a thriving institution. Below is a graphical representation of this strategy in reference to the club.

With Laporta’s presidency came an influx of new players as well as a new young manager, Dutchman Frank Rijkaard. In response to missing out on David Beckham, Barça signed Brazillian icon Ronaldinho and Mexican defender Rafael Márquez, both of whom went onto becoming club legends. In the subsequent years, marquee signings included Deco, Samuel Eto’o, and Thierry Henry.

Once elected as president, Laporta moved to sign Ronaldinho – a tactful arrival. (Photo via Getty)

An avid admirer of Johan Cruyff, he wanted to return Barça to its core roots with an emphasis on the Cruyffian philosophy of football and La Masía, their youth academy. This countered Real Madrid’s Galácticos, who sought to sign the biggest names in the sport. In his first season, Andrés Iniesta and Víctor Valdés were promoted to the first team.

Cruyff also worked as Laporta’s unofficial advisor, and he gave resounding advice such as recommending the hire of Rijkaard.

It took another underwhelming season before the Catalans finally triumphed. With Rijkaard and a rejuvenated squad, Barça won the La Liga for the first time in six years in 2004/2005, in addition to the Spanish Supercup.

Despite this success, five board members resigned that year, including senior advisor Sandro Rosell, claiming they did not like the direction the club was heading into and who Laporta had become. Nevertheless, Laporta’s project was succeeding as spending on wages reduced from over 80% of revenue in 2003 to 49% by 2005, and the number of socios increased by 20% to total to 130,000.

President Laporta opened the doors for Rijkaard, who turned the tables quickly for Barça. (Photo via Imago)

In 2005-2006, spearheaded by Ronaldinho and Samuel Eto’o, the Catalans won the UEFA Champions League, Spanish Supercup, and retained the La Liga. They also famously defeated Real Madrid 3-0 in the Bernabéu, truly cementing themselves on top of the world.

In the summer of 2006, a judge ruled that Laporta’s first eight days in charge in 2003 counted as an entire year, thus putting an end to his four-year term. Nonetheless, he won the elections as no other candidate garnered the requisite votes.

More so than focusing on redeeming Barça’s on the pitch success, Laporta knew the importance of promoting the club as a global brand and maximizing its revenue streams.

Laporta understood the duties as President, and pushed the club to make it a global brand. (Photo via Getty)

A plethora of broadcasting deals paid dividends. A five-year deal in 2003 with Televisió de Catalunya was worth a reported 54 million euros annually. In 2006, Mediapro, a Spanish television conglomerate, took over the aforementioned contract, paying 150 million euros per year until 2008/2009, according to the book “Who Owns Football?” 2011.

The signing of Ronaldinho helped bring the team on the world stage, and he immediately brought smiles back to the team. The club worked closely with Nike and signed an extension in 2005/2006 for 30 million euros a year, further helping to propel the club internationally. Barça also had tours to Japan, South Korea, and China, allowing them to interact with fans outside of Europe and generate more income.

Laporta knew the importance of the club motto “Més Que un Club”, which translates to “More than a Club”, and did his best to work on that.

For instance, the club never maximized ticket prices, refusing to take advantage of supporters’ loyalty. They were always affordable, and the book “Who Owns Football? (2011)” reports that the cheapest season ticket in 2006 at the Camp Nou was 69 British pounds, compared to 885 pounds at Arsenal FC’s Emirates stadium.

Laporta term as President benefitted a lot with the backing of Johann Cruyff. (Photo via Imago)

Until 2006, Barça remained one of the few major teams in Europe without a sponsor, and it was naturally a source of pride for supporters. That year, the club partnered with UNICEF, agreeing to donate 1.5 million euros a year to the organization. This was not a typical sponsorship, and it represented Laporta’s approach for Barça to represent the right values.

“We are proud to partner with UNICEF to develop our social responsibility, and to try to make the world a better place for children. We are playing the most important match of our lives here — a match against poverty and disease. Together, I think we can win this match.”

Laporta on the partnership, 2007

Following their 2005/2006 campaign, the club was thriving financially and matched that with magnificent on the pitch success. But naturally, maintaining a winning environment is as difficult as winning itself, and the team faltered in 2006/2007. The team was crumbling, and at times captain Carles Puyol was the only one holding them together. This culminated in a trophy-less season, and the Blaugrana finished third in La Liga the following year.

Nonetheless, failure on the pitch always outweighs commercial success, and in the summer of 2008, Laporta faced a vote of no confidence. It ended up tallying only 60% of the socios‘ votes, just shy of the 66% required to expel him. Eight of the 17 board members consequently resigned, but Laporta stayed on.

Johann Cruyff notably came out in support of the incumbent president.

“To be a club member gives you some advantages, but also obligations. One of them is going to vote next Sunday. I will be voting to keep the same people in place.”

Cruyff on the vote of no confidence, 2008

Knowing the club needed a shake-up, Laporta fired Frank Rijkaard and with Cruyff’s counsel, promoted Pep Guardiola to first-team manager, a controversial pick at the time. Laporta wanted someone symbolic of the Blaugrana and all the club stood for, thus Guardiola made for the perfect choice.

No decision by Laporta as president tops hiring Pep Guardiola as manager of the club. (Photo via LLUIS GENE/AFP)

That summer, core pieces Ronaldinho and Deco were sold to AC Milan and Chelsea FC respectively, and the team was built around a core of La Masía graduates, namely Xaví Hernández, Andrés Iniesta, and Lionel Messi.

Guardiola’s first season in charge ended up being one of the club’s most successful of all time. Playing “Tiki-taka”, the Catalans dominated Europe with their style and finesse. Along the way to winning the fabled treble for the first time (Champions League, La Liga, and Spanish Cup), they decimated Real Madrid 6-2 in their home stadium and resoundingly beat Manchester United 2-0 in the Champions League final in Rome.

Night in and night out, the team played beautifully, and budding stars like Messi finally cemented his place on the world stage. It was a magical season that no Cúle can ever forget.

A historic year, which no club will ever match. (Photo via Imago)

Glory continued the following season as Barça became the first team in history to win the Sextuple– winning six out of six possible trophies in a single year.

Laporta’s presidency came to an end in 2010, although not without controversy, particularly one surrounding heavy financial losses. His ex-senior advisor, Sandro Rosell, won the following election with more than 60% of the vote.

Laporta is remembered fondly by most fans. He and his team carried the club out of institutional, financial, and sporting crises, increasing membership from 106,135 to 173,701, the annual budget from €170 to €405 million, and winning twelve major trophies along the way.

Joan Laporta is a Barcelona icon, and on January 24, he might return as President.

If not for him, FC Barcelona would surely not be what it is today, both as an institution and sport icon. Laporta knew what direction to take the club in, how to bring it into the 21st century, and when to heed advice from others.

Laporta’s name is etched in gold and diamond in the history books, and on January 24, he will be hoping to win the Presidency, and carry Barcelona through yet another crisis.