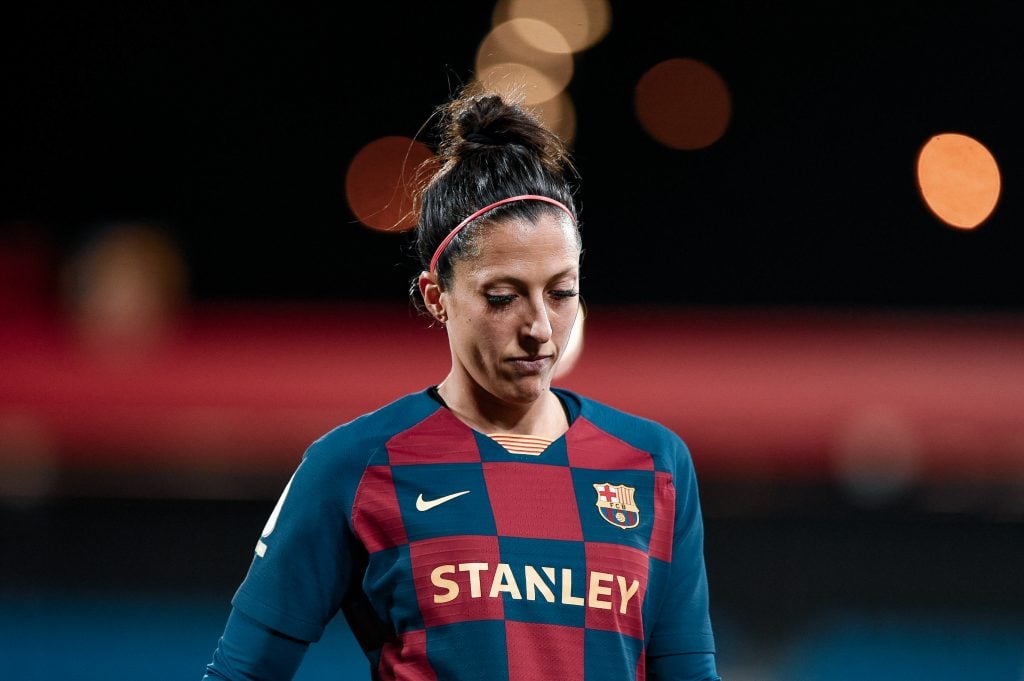 Once more, with 23 goals, Jennifer Hermoso is the Primera Iberdrola top scorer, as she has been standing out at the top in her return to Barça Femení.

There are few out-and-out strikers in world football who have endured a period of form like Jennifer Hermoso has. After ending the 2018/19 La Liga season with an incredible 24 goals for Atlético de Madrid, Hermoso was snatched back by Barcelona and has already scored 23 goals so far in 21 league matches upon her return to the club.

Hermoso made her return to Barça Femení amid the club’s search for their first league title in 5 years. Additionally, they’re looking for a rematch to win their first Champions League trophy following the defeat in last season’s final at the hands of Olympique Lyonnais. With all the changes in and out of the club this past summer, how has Hermoso’s return specifically aided the blaugranas?

Jenni is best described as a complete forward. One of the most impressive facets of her game is the ability to play in just about any attacking position. Typically, Hermoso is deployed as a center-forward, but during matches, you will often see her take up positions all across the forward line.

Jenni was born in Madrid on 9 May 1990. At the age of 12, she joined the Atlético de Madrid Femenino youth set-up, where she gradually progressed through the ranks before breaking through into the first team. She made her First Division debut with Atlético Femenino’s senior team and later moved clubs within the capitol, signing for Rayo Vallecano.

Jennifer Hermoso, after Spain were eliminated by the USA in the 2019 Women’s World Cup | Photo by Lionel Bonaventure / AFP via Getty Images

Back in 2013, 22-year-old Jenni enjoyed her only taste of club football abroad, when she went up north to Swedish outfit Tyreso. She spent a season alongside fellow Spaniard Vero Boquete as she plied her trade, as well as famous names such as Brazil’s Marta, Sweden’s Caroline Seger and the USA’s Christen Press. She featured in the European Championship for Spain that same year and notched the team’s first goal in Sweden in their opening match in the competition. Spain ran out 3–2 winners over England, with the Barcelona forward named player of the match. Jenni would later return to Spain’s top flight to sign for FC Barcelona, after a year playing abroad.

In 2017, she left Barcelona to join PSG, returning to La Liga and Atleti a year later. Her second spell at Barça would come when she was signed again in the summer of 2019. Hermoso was the top goalscorer in the league during the three seasons before her rejoining Barça.

Jenni made her return to the club where she scored 77 goals in 90 matches between 2013 and 2017, picking up two consecutive Golden Boot trophies in 2016 and 2017. Barcelona won both the league and the Copa de la Reina twice in that period. Since then, Hermoso has been moving clubs each year. In 2017/18, she helped Paris Saint-Germain finish second in France’s Division 1 and win their first Coupe de France title since 2010. In 2018/19, she moved to Atlético de Madrid, scoring 24 goals in 28 matches, picking up her third Golden Boot en route to the league title.

❛ I learned all the base knowledge I have at Atlético, but Barça defined me as a player. In the end, you always think you can go back to where you were happy ❜

Hermoso is a striker who, thanks to her technical skill and understanding of the game, can drop back to create play in the midfield. She is a natural leader who possesses a strong left foot and a big aerial presence.

Hermoso is very selective when she makes her runs forward. Playing deeper than a traditional number nine, she makes fewer attempts to get behind the defence. However, she is very efficient in making these types of runs. Hermoso’s versatility is undoubtedly her biggest asset. Along with her ability to drop deeper, she is equally adept at playing out on the wing. Herself and Mariona have found large success in the early weeks floating in between the left-wing and striker position. While Hermoso is naturally left-footed, she is almost as dangerous on her right. In the 9–1 victory of CD Tacón, Hermoso rounded off her hat-trick by cutting in from the left half-space. About 19 yards from goal, she used her right foot to curl an effort into the opposite corner.

Hermoso tries to get into the space between the centre-half and full-back. She prefers this area for two main reasons. When play is moved into a wide position, getting into this area on the opposite side presents her with an ability to be a threat on crosses. The full-back must remain honest with their positioning due to the wide player in Barcelona’s 4–3–3 formation. With that in mind, she is normally isolated on the blind-side of the centre-half. This gives her every option of where to make her run into and forces the defender to be reactionary to her movement rather than dictating where she has room to move.

For her goals, impact, character and love for the colours, Jenni has become one of the most loved players by the fans | Photo by Imago

If the centre-half follows her, Hermoso’s ability to hold up play and distribute to teammates allows her midfielders and wingers to move forward to expose the vacant space. If the striker is given room to receive possession and turn, she can use her dangerous finishing ability to finish moves herself from this position. She will also look to create space when she drops back to assist in Barcelona’s build-up. As she leaves her marker in the centre of defence, typically another attacking player will move into this position. As a centre-midfielder, Hermoso’s intelligence as a striker makes her extremely dangerous in this position.

When the attack is moved forward, normally down one of the wings, Hermoso uses her excellent reading of the game to find space in the box. Her late runs can be used as the crossing option for her to have a chance to score. This also forces the defence to react quickly. If she is allowed to run into space unmarked, she is easily capable of finishing from any angle on a cross. Additionally, if the defence tries to step forward to cover her, it opens up space for a teammate to run into.

Players and coaches on Jenni

José Luis Sánchez, then-Atlético manager: “Jenni Hermoso played last season at PSG, finishing runners-up in the League and French Cup Champion, winning against the all-powerful Lyon in the final. This season she signed with Atlético Madrid and makes the team win in situations of close play and tight playing spaces for players like Ludmila. Jenni is a very talented player, with an exquisite technical capacity and that makes differences in the reading of the game and decision making”

❛ Jenni is our playmaker. She is a girl as comfortable with her left foot as she is with the right. She has a great talent and represents a real contribution offensively for our team ❜

Veronica Boquete, Jenni’s teammate at PSG and Spain: “Jenni is a player with an exquisite technique that allows her to control the ball easily. When she picks up the ball the game seems to stop to give her time to choose the best option. She likes to give the last pass and she does it all with a unique elegance. Her passing is fantastic and she always puts it where she wants, both at set-pieces and in play. Jenni is special, one of her smiles changes the mood and having her in a team is always a plus. Besides one of the funniest people I’ve ever met!”

❛ She is the most talented Spanish player I have ever played with. She is capable of doing things that only she knows and is a great colleague in the locker room. She was also the top scorer in the league last year with 35 goals ❜

Lluís Cortés, Barcelona coach: “I was thrilled when Markel told me he had signed Jenni. I wanted her on my team. She had already demonstrated the level she has, as she also did in the World Cup. She contributes many things on the field, and also outside. She is very professional, far from being a star, she is super humble and will work here as the best”

There are too many ways Jennifer Hermoso can toy with a backline. She is constantly moving during a match and causing trouble for any defence she comes up against. This is a major asset for the Barcelona team. Lluís Cortés will be able to find countless ways to use Hermoso’s ability to generate opportunities in his tactics.

Signing Jenni was a major statement of intent for Barcelona following their Champions League defeat to Lyon in Budapest. The striker provides the team with guaranteed goals and help in the buildup that undoubtedly leads to even more output, judging by the staggering tally of 86 league goals scored so far. Additionally, by extending the contract of key players like Lieke Martens, Alexia Putellas, Mariona, Leila and Mapi, it is clear that the Barça Femení have a more promising project when compared to the male counterparts.