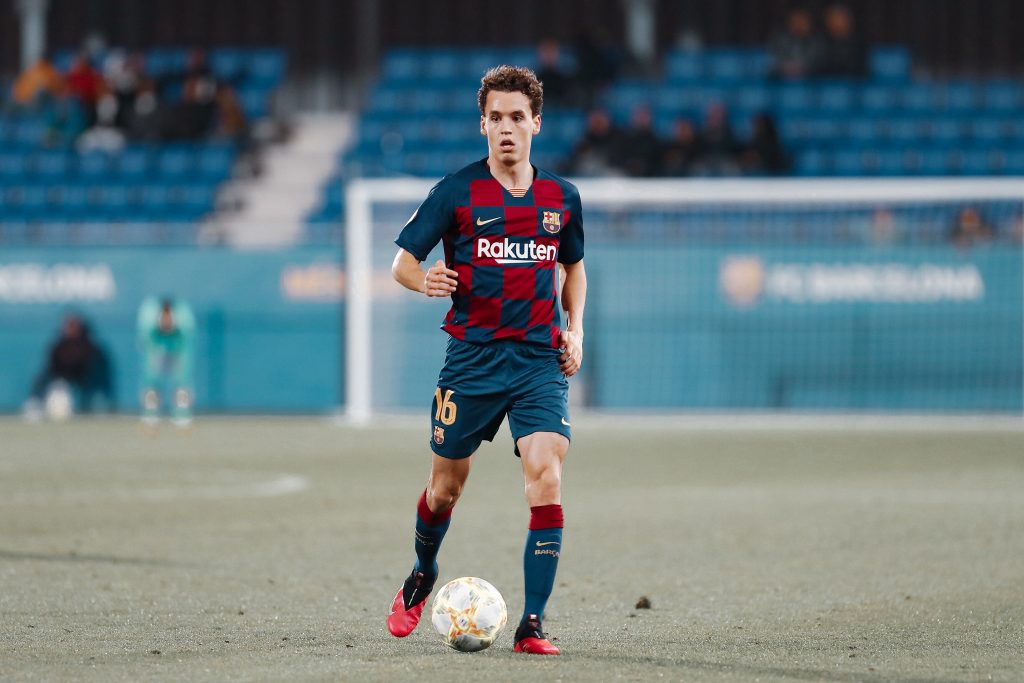 Jandro Orellana, an architect by nature, has had an instant impact in his first full year at Barça B and a future role in the first team should be non-negotiable.

Jando Orellana is a master of positioning and, also, of distances. Born in 2000, he’s one year younger than the likes of Riqui Puig, Álex Collado and Monchu, but understands each of them to perfection. While he won the Youth League as a starter with them in 2018, the serious injury he had suffered that season saw him stay at the Juvenil A for the 18/19 campaign as most of his teammates were promoted to Barça B. Last campaign was a very satisfactory and nurturing one for Jandro at an individual level. Captain and metronome, he abandoned his usual holding midfield role to act slightly more advanced, as an interior or central midfielder. This helped him understand the forward spaces better, making arrivals into the box more often and having a greater impact in the final third. He did take the penalties and set pieces, but managed to be the Juvenil A’s third top goalscorer with 7 goals plus 7 assists.

With Oriol Busquets leaving on loan to Twente, Orellana was finally promoted permanently to Barça B at the start of this season. Despite not being completely similar, the change from Oriol to Jandro has been almost seamless in terms of level. The 19-year-old has returned to the pivot role, and from there he has been one of the B players who have had a greatest indirect influence in the side. Even if García Pimienta started alternating Ludovit Reis, Sarsanedas and Jandro, it was a matter of time till the younger of them imposed himself in the starting line-ups.

This has had some big consequences. First, for Orellana’s obvious quality and expertise. However, he has also indirectly enhanced the virtues of several of his colleagues. With the former Gavà boy taking up the defensive midfield role, Monchu has left that position and has occupied the central midfield alongside Riqui Puig. This has led to the exploitation of one of Monchu’s greatest strengths, which is his surprise appearances into the opposing box. Monchu has been Barça B’s top scorer this term, with 8 goals.

From leader of the Juvenil A, to metronome of Barça B | Photo by Imago

Jandro Orellana’s profile is tailormade for the first team. On and off the ball, he has some concepts very internalised to always favour the ball circulation. Continuously searching for superiorities, when taking the ball out from the back he can drop between the two centre-backs (1), move to one side of the two centre-backs (2), or wait behind the first line of pressure (3). He detects when he needs to apply each situation, as he’s very intelligent at offering passing lanes and advantages in build-ups. Him and left-footed defender Jorge Cuenca are two extraordinary passers and initiators of Barça B’s attacks.

The mentioned dominance of the spaces and distances helps Jandro in his positioning, as well as in his distribution. In terms of passing technique, he’s close to flawless. But, apart from that, he knows which teammate he needs to find and which zones to activate. He can play short intricate passes, or distribute through pinpoint long balls. His vision and execution are excellent. He prioritises giving fluidity and speed to the ball circulation, and for that it’s critical having the proper body orientation before receiving a pass. His perfect body shape at all times allows him to make only one touch when most players would take at least two. Quick and simple, without forgetting that playing simple football is the hardest thing there is – as Johan would say.

His tactical game is extremely mature and accurate for his only 19 years of age. In the attacking phase, and also in defence. When Barcelona lose the ball, he’s very active to anticipate and obstruct any attempt to counter-attack from the opponents. He pushes the lines higher and makes the pressing far more effective. Possibly the defensive duels are his main weakness, but he has been improving this aspect with the passing of months. Facing veteran strikers in the Second Division B has helped him evolve in this sense.

While Oriol must not be forgotten, the quality, smartness, positional sense and pure Barça DNA of Jandro Orellana should make him Sergio Busquets’ long-term replacement. Maybe it would be too early to directly promote him to the first team this summer. Or maybe not. Still, an extra year at Barça B under Pimienta will do him no harm, yet it’s undeniable that the club must look to protect yet another midfield gem from La Masía. An organiser and architect, Jandro Orellana’s future should only lie at the Camp Nou.